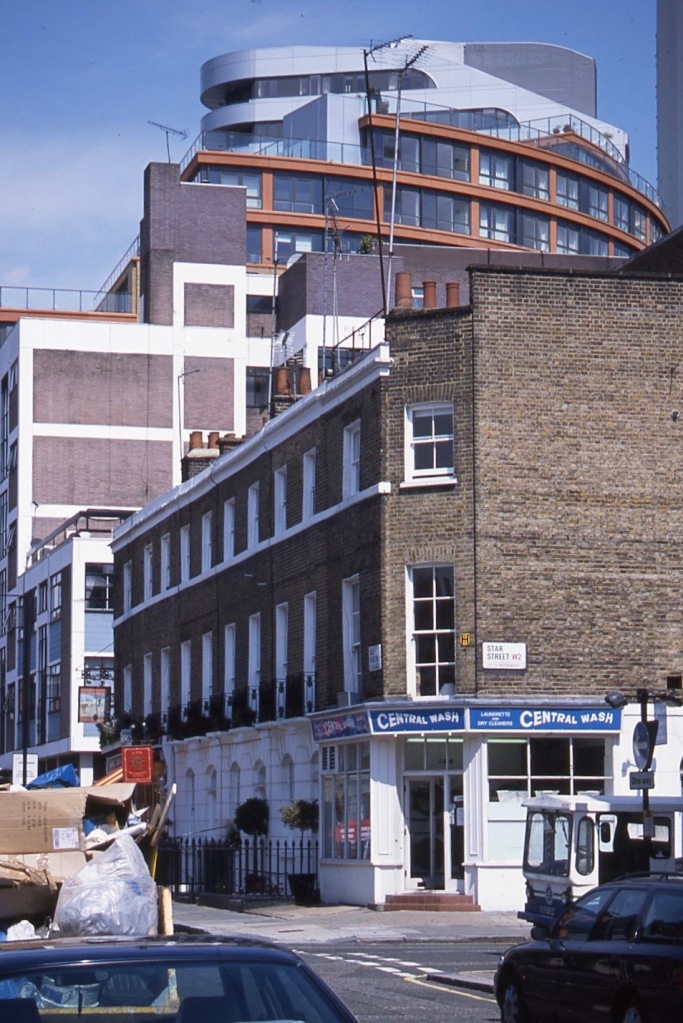 In my ‘Farringdon and Paddington’ post of two days ago, I featured a view of the Paddington Basin Development from Praed Street. Here is one from Star Street W2. Several million pounds, even then, was required to purchase one of the top floor apartments. Perhaps the terra cotta arcs are an attempt to remain in keeping with the chimney pots of the older terraces. Central Wash laundrette is still in business at 17 Star Street.

This photograph is the first of a batch of a dozen Streets of London series colour slides from July 2004, that I scanned today. Star Street lies parallel and between the equally parallel Praed Street and Sussex Gardens, the latter of which form a rectangle with Edgware and Bayswater Roads. This contains a network of smaller streets 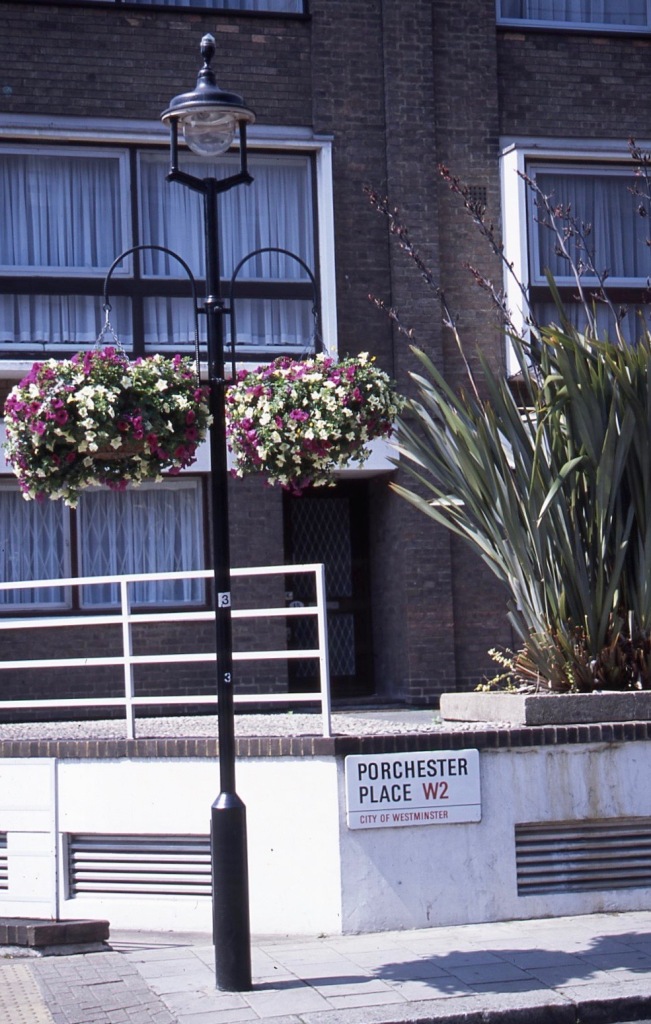 one of which is Porchester Place W2. This is of course part of the London Borough of Westminster, prepared to spend money on hanging baskets in honour of its visitors.

Another is Connaught Square W2, leading  to Hyde Park Square where, 3 years on, I was to take out a nightmare rental, the story of which is told in AAARGH!

Seymour Street W2 crosses Edgware Road, and runs through Portman Square to Wigmore Street. What, I wondered, was this woman’s relationship with the child in the buggy.

Dunraven Street W1 lies parallel to Park Lane. North Row runs alongside Oxford Street. Marble Arch is very nearby, beyond the Big Bus Company‘s tour transport. The trees are in Hyde Park. I’m not sure who the uniformed gent represents.

A major refurbishment was underway in whichever this was of the streets crossed by Park Street W1, and leading directly into Park Lane. 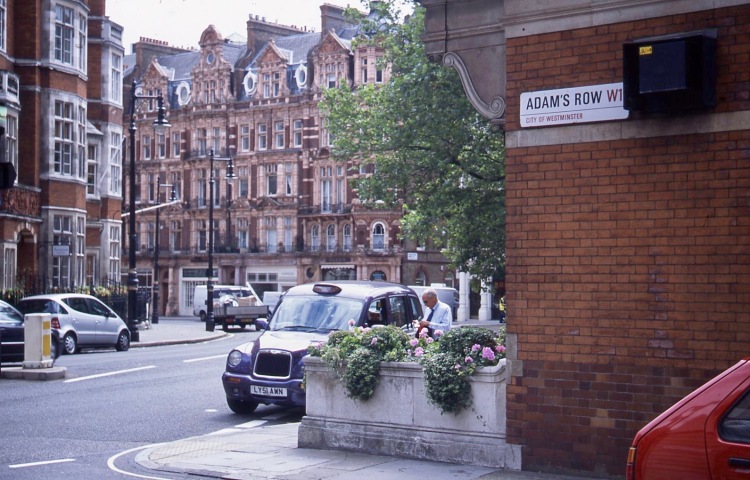 Park Street leads us into the heart of Mayfair with its splendid buildings viewed here from Adam’s Row. Six months ago you could rent a 1 bedroom flat in Adam’s Row for £4,225 per calendar month. That was on the first floor of a period coach house., in other words not one of the grand apartments on view in this picture. 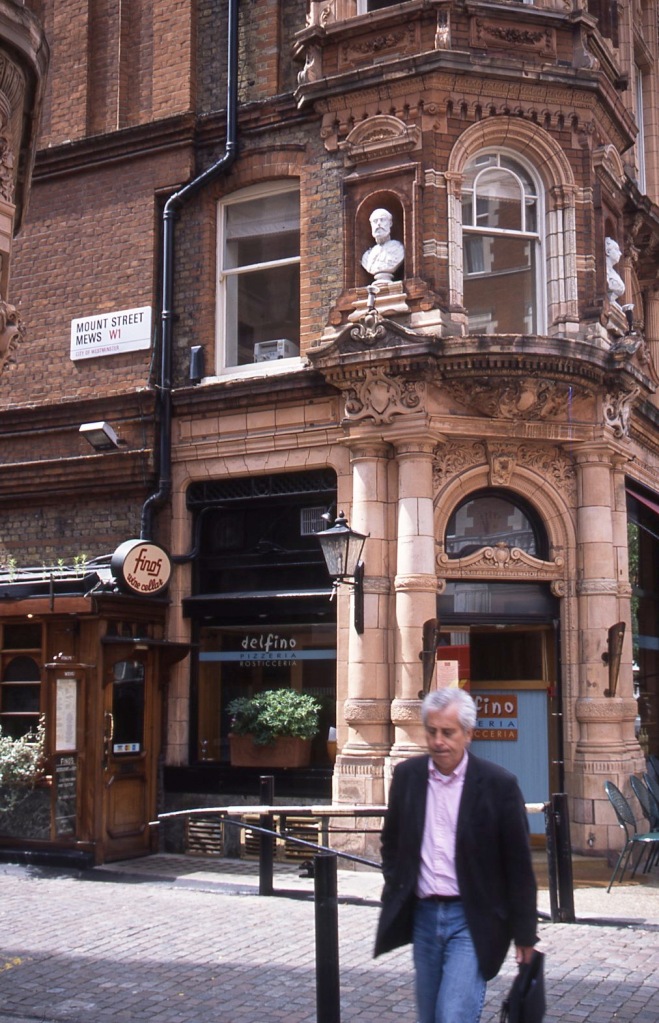 On 22 September last year Stephanie Hirschmiller in The Daily Telegraph described Mount Street, Mayfair as “one of London’s most stylish destinations….home to a plethora of luxurious boutiques and restaurants with global acclaim.” One of these establishments is Delfino Pizzeria on the corner of number 1 and Mount Street Mews W1. Would Queen Victoria and her consort, Prince Albert, whose busts look down onto these streets, I wonder, be amused at all this?

All I know about nearby Jones Street W1, is that it is not in Greenwich Village. 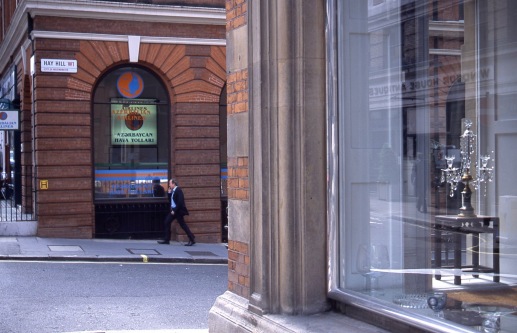 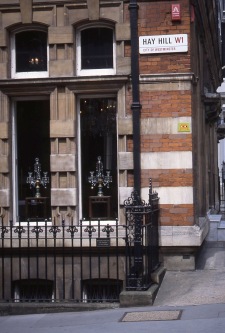 Hay Hill, W1 is as steep as it looks. The gentleman in the first picture is striding into Dover Street, where can be seen both the elegantly restrained window display of the corner antique shop, and a reflection of another across the road. The Club for Business at 12 Hay Hill claims that:

“Hay Hill has a history of good fortune

Beau Brummell was an iconic figure in Regency London. On an early summer’s morning in 1813, Beau was lamenting a run of bad luck, which had led him close to destitution. Wandering around the corner of Berkeley Square towards Hay Hill, he saw something glistening on the floor. It was a crooked sixpence. He took the coin home, drilled a hole in it, and attached it to his watch chain. Almost overnight, his fortune changed and the penny became his good luck charm and he always looked fondly on Hay Hill.

“Whilst at 12 Hay Hill we believe you make your own fortune, we hope that a bit of good luck from the place where Beau found his sixpence won’t do our members any harm…””

This evening we dined on Jackie’s classic chicken jalfrezi, wild rice, onion bahjis, and parathas, with which I finished the Shiraz.

30 thoughts on “Would They Be Amused?”