CLICK ON ANY IMAGE IN A GROUP TO ACCESS ITS ENLARGED GALLERY, EACH OF WHICH CAN BE FURTHER ENHANCED BY CLICKING ON THE BOX AT BOTTOM RIGHT. THE TWO INDIVIDUAL PICTURES WILL ENLARGE BY CLICKING.

This morning Jackie drove us out to MacPenny’s Garden Nursery at Bransgore, where we brunched at The Robin’s Nest. Jackie mooched around the

sales area, where she learned how necessary were the signs asking people to keep their dogs on leads because they have chickens. Apparently more of their chickens are killed by customers’ dogs than by foxes. 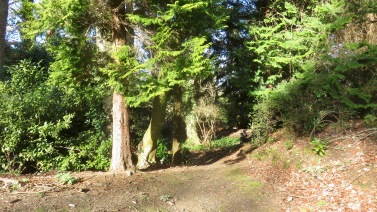 I wandered along the garden paths and up and down the wooden steps. 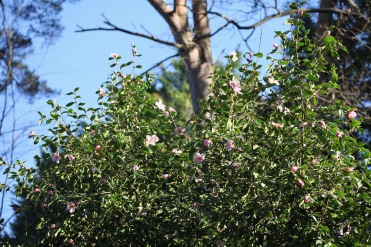 A flowering cherry and several camellias were resplendent. Some of the latter soar amongst branches of trees, dropping their heavy blooms onto the beds of last autumn’s leaves.

Some spears of bulbous plants are piercing they way through the soil to join a few crocuses and hellebores. 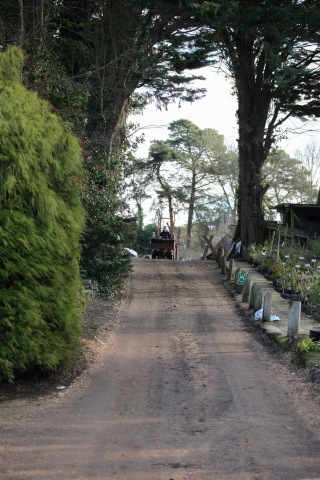 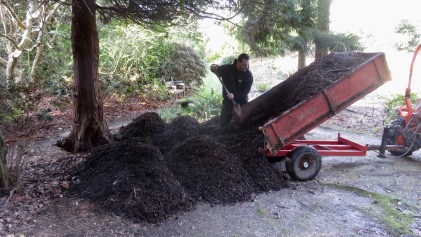 I spoke first to a man collecting and delivering mulch to heaps beneath some trees.

These were for gardener, Rob, to spread around the beds. Rob himself told me that he was the only person who did all the plant care, maintenance, and weeding. “A lot of work for one man”, he proudly stated.

On our way home we stopped at Redcliffe Nurseries where Jackie bought two primulas and an ivy with which to supplement her planting in the iron urn and a new one just in front of it.

This evening we dined on Jackie’s stupendous sausage casserole; her pulverised creamy mashed potato; and toothsome Brussels sprouts and broccoli. She drank Hoegaarden and I drank Val de Salis Syrah 2014