SINGLE IMAGES CAN BE ENLARGED BY A CLICK WHICH MAY BE REPEATED. CLICKING ON ANY OF THOSE IN A GROUP ACCESSES ITS GALLERY, INDIVIDUAL MEMBERS OF WHICH CAN BE VIEWED FULL SIZE BY SCROLLING DOWN AND CHECKING BOX AT BOTTOM RIGHT

Setting the mood nicely, a sheet of heavy cloud leaked steady precipitation dripping down our windscreen all the way to New Hall Hospital for my appointment with Miss Melissa Davies, consultant urologist early this morning. Windscreen wipers swept across my vision. After an examination I’d rather not describe, and a full questionnaire I was able to leave with a certain amount of optimism signalled by the clearance of the skies and the emergence of sun separating the clouds. I do have to order a specific blood test and ask my GP to recommend a procedure involving a miniature camera and an anaesthetic.

Feeling rather hearty, we stopped at the charming village of Hale which I photographed without the need to numb my consciousness.

“You’re not photographing that are you?” asked the local resident who did not think the sculpture on the edge of the green looked much like  a pony and foal.

The tree behind the sculpture was planted in 1992 to commemorate the fortieth anniversary of the accession of Queen Elizabeth II. The brass plaque explaining this is headed ‘Kinges Oak’. 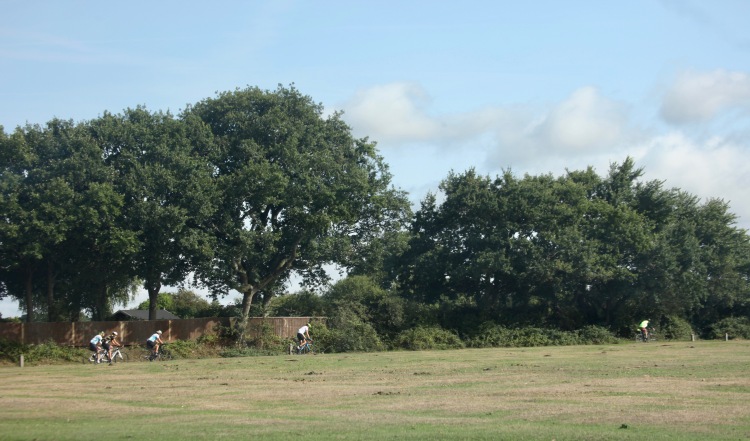 A string of cyclists sped past the green, 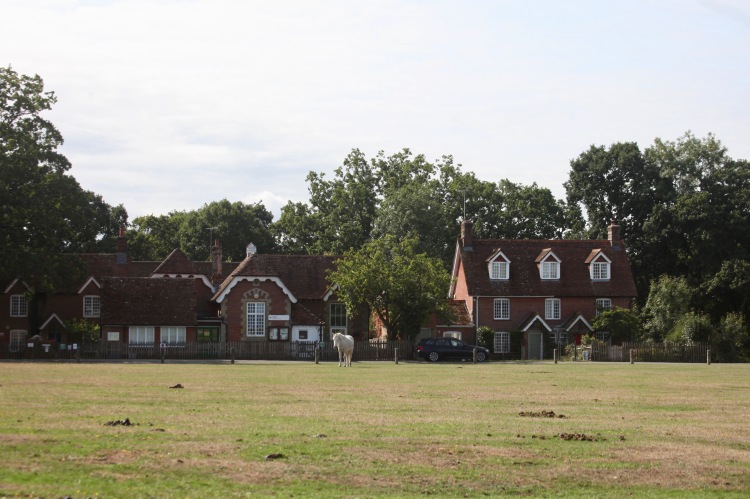 on the other side of which a solitary equine representative stood before the school, the students of which will be playing where it stands once they return from the Summer break. 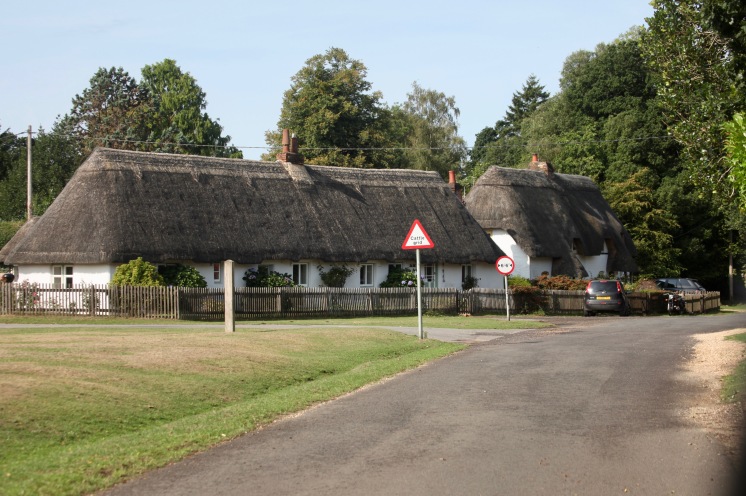 All post in the forest is delivered from little red vans, like the one driven by the postman enjoying a chat with a resident of one of the attractive thatched cottages. 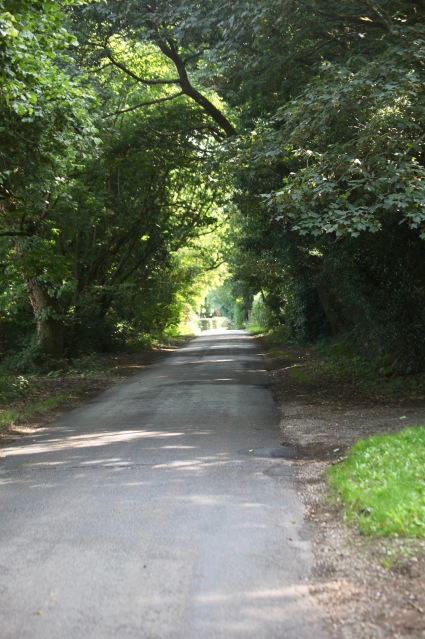 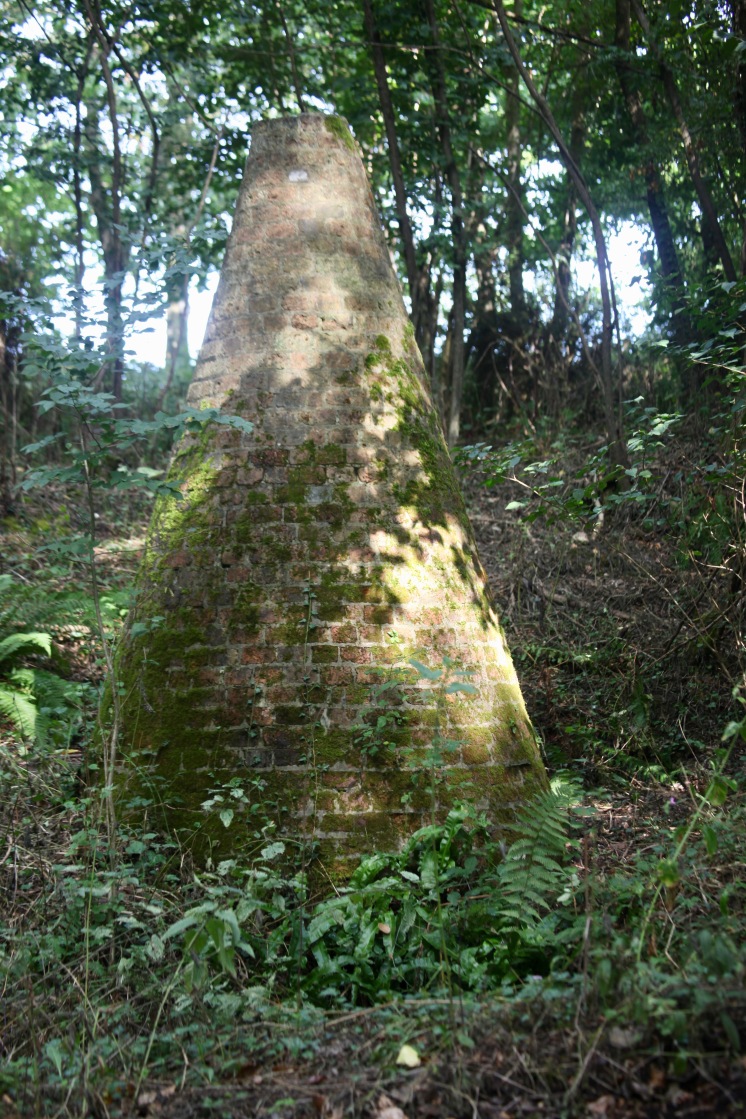 The village is approached by narrow tree-lined lanes. I wondered whether the above brick built structure was the ice house once belonging to Hale House. 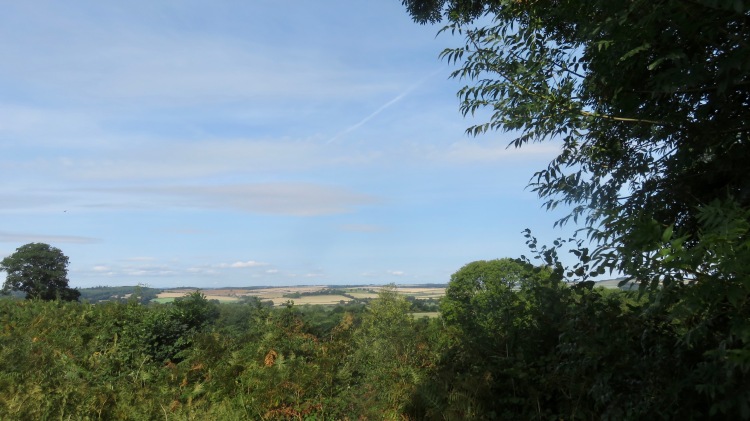 From the higher levels could be seen a patchwork quilt flung across the landscape,

above which patrolled a predatory raptor. 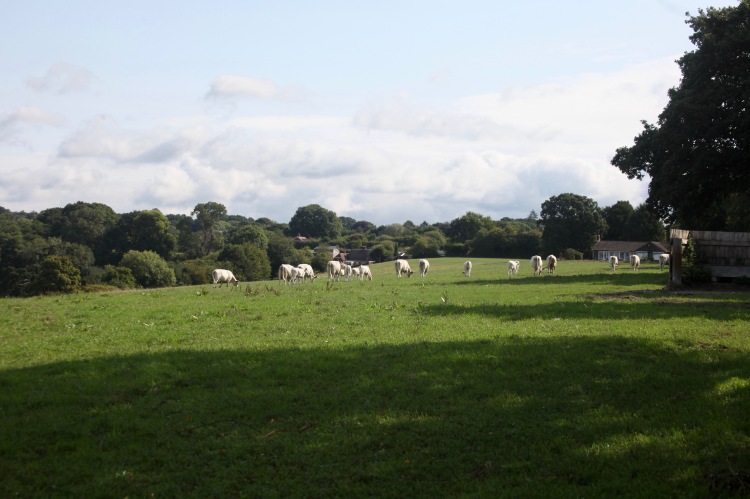 A herd of cows dined on the upper slopes. 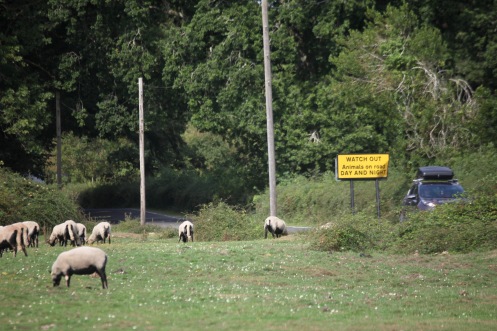 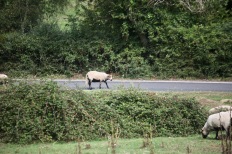 The whole length of Roger Penny Way is punctuated by warning signs alerting drivers to the possibility of animals on the road. One is ‘Watch Out……’ pictured here. This flock had passed the sign when making their way across the road to this pasture. While I focussed on them a large bovine ambled down the centre of the minor road to my left to join its ovine cousins.

Afterwards we brunched at the Walkford Diner. Here we enjoyed huge traditional breakfasts cooked on a griddle. Black puddings and haggis, for example, are imported from Stornaway, and potato scones are just like the ones Mum used to make. Only when inside did we realise that the establishment was run by Ian, who had produced excellent meals at Molly’s Den. These were even better.

It will therefore come as no surprise that I could not join in the ladies’ enjoyment of Jackie’s beef in red wine dinner. (Mum is better and Elizabeth is back with us). I was, however, able to manage the Culinary Queen’s apple and apricot crumble and custard, and a couple more glasses of the Fleurie.