PREFIX 21st December 2020: Two further deaths and a move to a care home have necessitated some amendments. Apart from Mum’s, the various ages are those at the time of the original post.

I am indebted to Jane, one of my followers, for pointing out the need for a family tree in order to clarify some of my posts.  What began in May 2012 as a record of my days based on walks has become a much more extensive project, arising out of far more interest than I could possibly have imagined.  The blog title ‘Ramblings’ comes from the idea that as I physically ramble along and take notice of what is around me, I also ramble in my head.  This brings about much reminiscing woven into current experiences.  Memories are not neat and tidy affairs.  They pop in and out of one’s head at will.

‘Ramblings’ have become a record of one man’s life as prompted by this aberrant and disorganised memory.  My daughter Rebekah has initiated me into the joys of digital links and tags.  The computer, you see, is capable of tidying everything up.  I am working my way through more than 600 posts, adding these amazing aide-memoires.

A comment from Alex Schneideman has also prompted me to tidy up a lifetime’s photographs.  My archives are in four forms.  There are photographic prints in hundreds of albums dating from 1942.  There are boxes of colour slides dating from 1963 to 1981 and again from the first decade of the current millennium.  There are albums of negative film covering the hiatus in the colour slides.  And finally there are the computerised digital images from the time of the acquisition of my Canon S100 in July 2012.  The albums and colour slides, and of course the digital pictures, are correctly filed in chronological order.  The twenty years of negatives are the problem.  They were kept in the processors’ envelopes with no dates or identification attached.  One cardboard box containing these was lost in the move from Newark in December 2006.  Whilst at Sutherland Place I began to attempt to sort the remaining collection.  That is how they found their way into negative albums.  The task of identifying everything on each strip is what I have been procrastinating over for the last few years.  Thank you, Alex, for giving me a reason for getting on with this.

For Jane, and anyone else who would find it helpful, here is my branch:

Mum and Dad:  Dad died in 1987, three weeks after I moved to Newark.  Mum  celebrated her 98th birthday on 2nd October 2020 in her Care home in Brockenhurst,

I married Vivien in June 1963.  She died in September 1965, having given birth to Michael in April 1964.  Our son Michael – ten days old in the picture was married to Heidi.  Their three children, therefore my

Rebekah’s daughter Florence, now 17, is the first of our shared granddaughters.

This is where it begins to get complicated, as if it weren’t already.  You may like to pause and take stock.

Jackie and I parted in 1972 and each remarried some years later.

Sam is married to Holly.  Their children are Malachi (almost five years) and Orlaith (13 months).  Consequently these two offspring are my grandchildren.

Louisa is married to Errol Thompson.  Their two daughters are Jessica (almost 7), and Imogen (5).  Two more grandchildren for me.

For Christmas the Thompson family gave me a framed photograph on canvas of the grandchildren I would have shared with Jessica.

Jackie and I met again at Matthew’s 40th birthday party in 2008 and have been living together again since soon afterwards. On 17th October 2017 we remarried.

This is merely a factual record.  The events have been full of all kinds of emotions, both extremely pleasurable and terribly painful.  This particular post is not the place for those.

My far more intelligent friend Judith Munns has sent me this hand-drawn Family Tree gleaned from this post.

Matthew and Tess have been married for fifteen years. They now have a daughter called Poppy. This required me to amend Judith’s family tree: 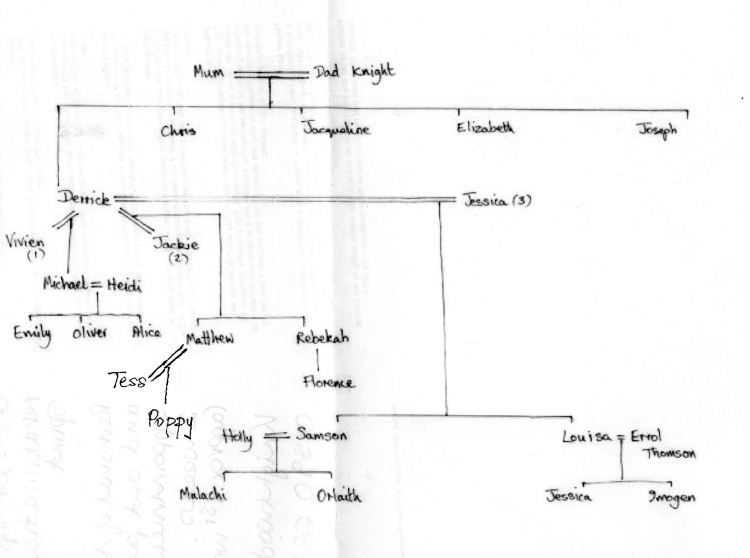 70 thoughts on “My Branch Of The Family Tree”