Yesterday’s ploughing reminded me of that misty morning of 26th September 1992 when I took a set of photographs of a ploughing contest in Southwell in Nottinghamshire. I could not find the negatives, so I scanned the prints. These images were in such good condition that I had no adjustments to make. 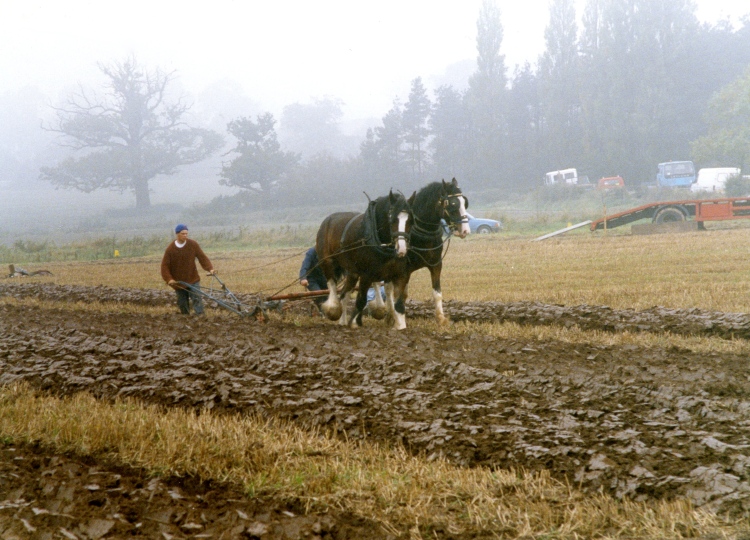 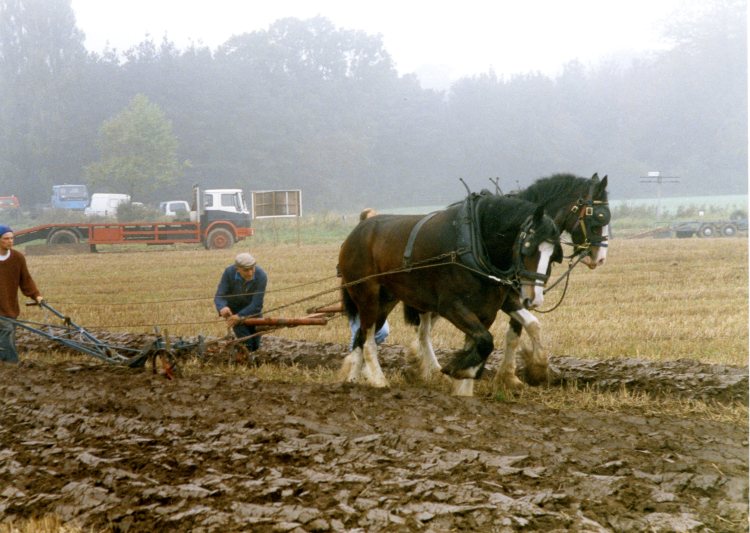 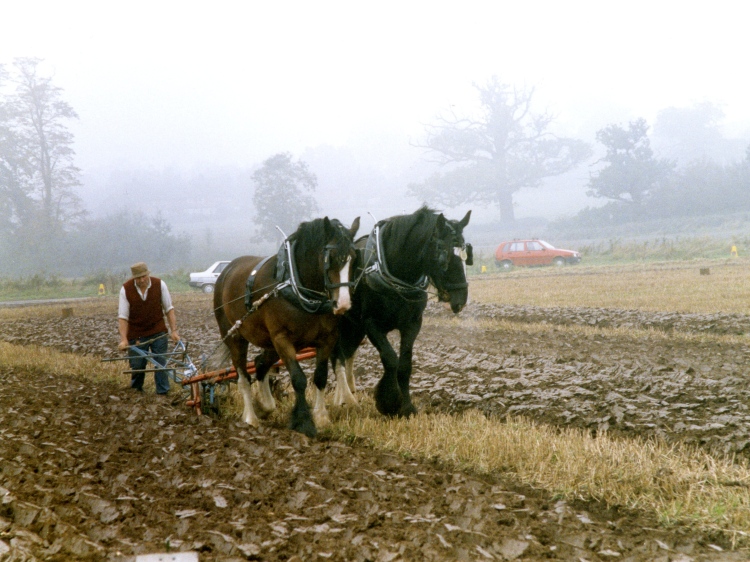 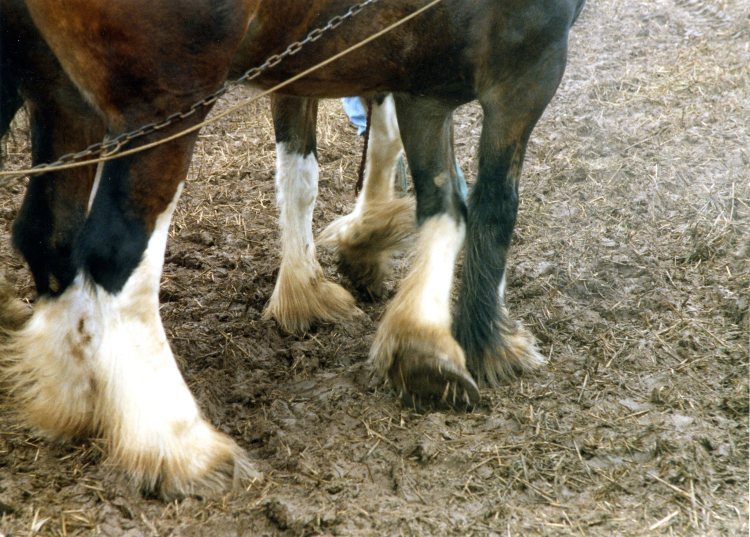 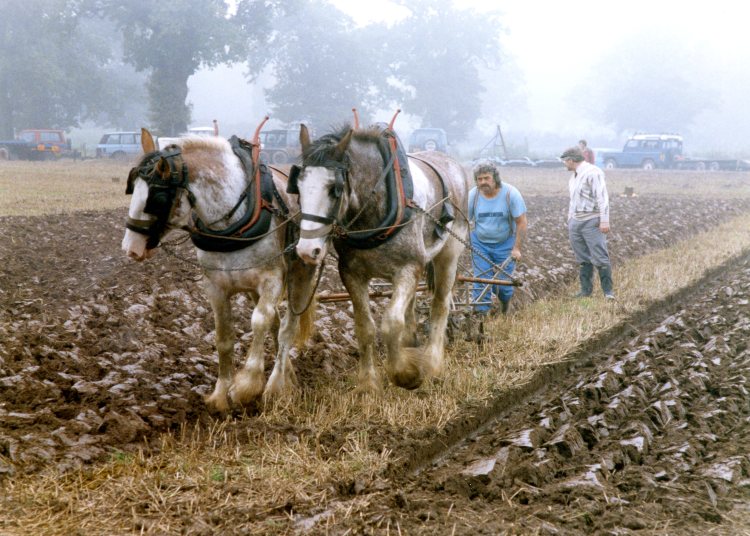 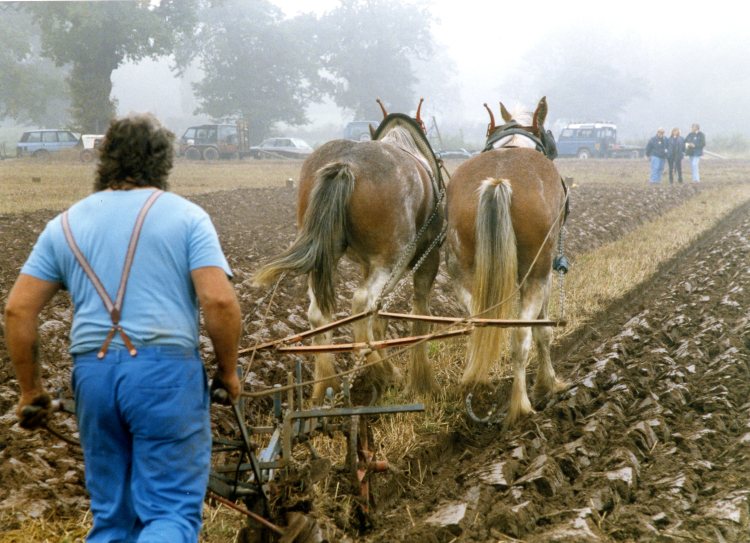 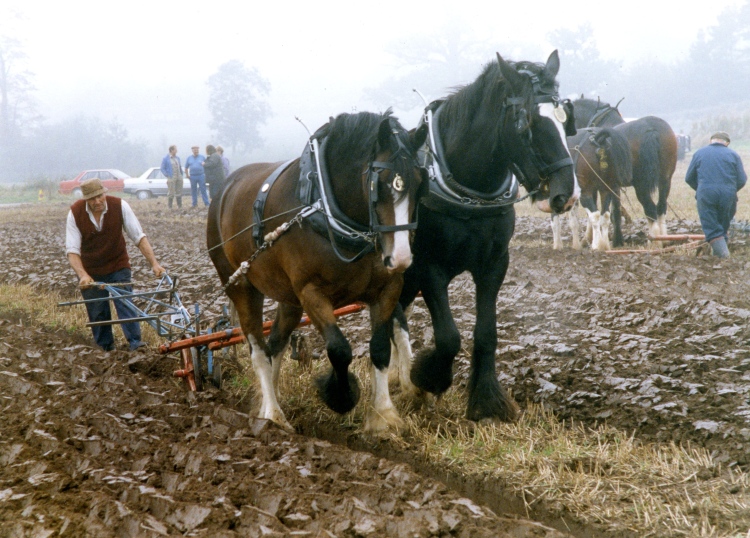 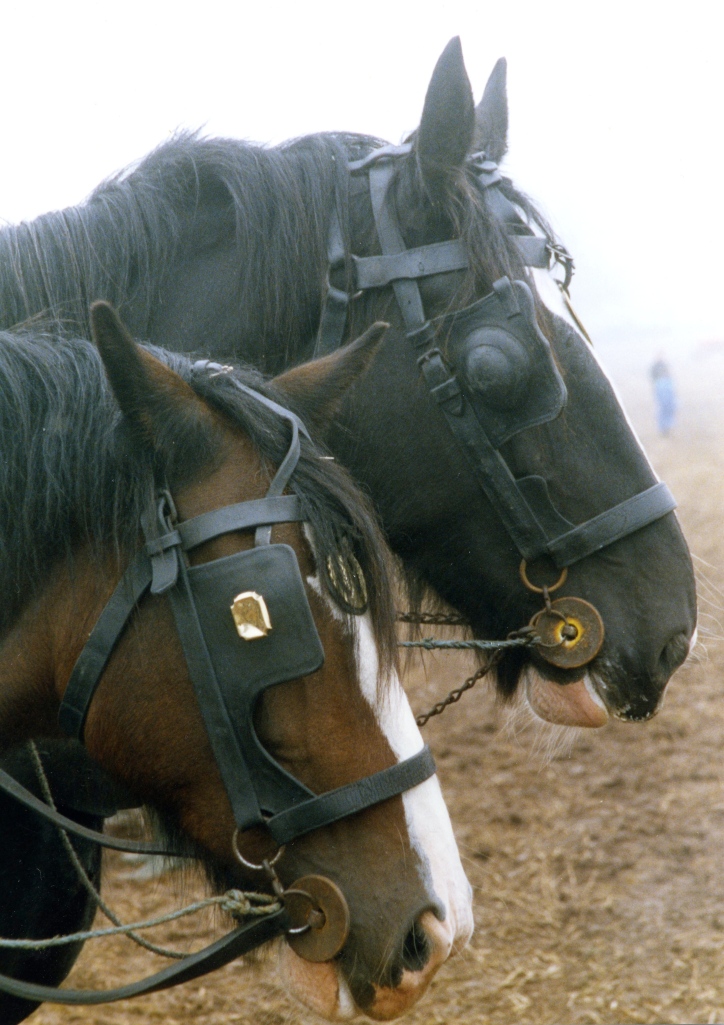 Most of the contestants were very skilfully handling horse-drawn ploughs. The powerful animals were splendidly tacked. 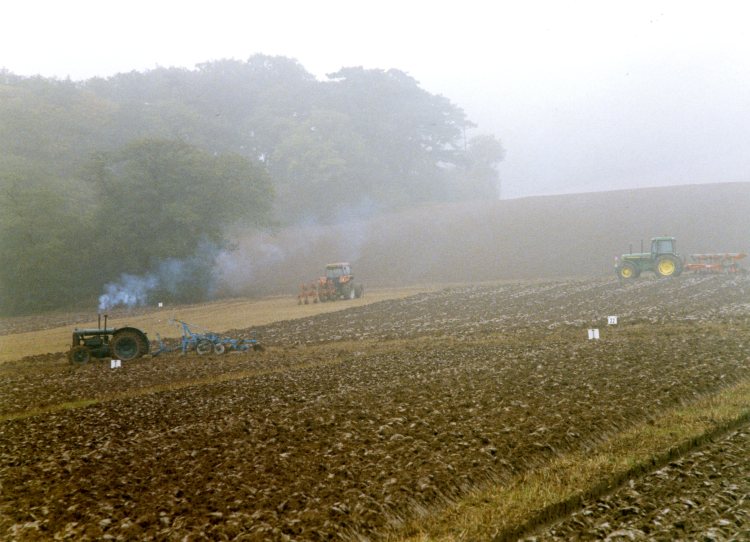 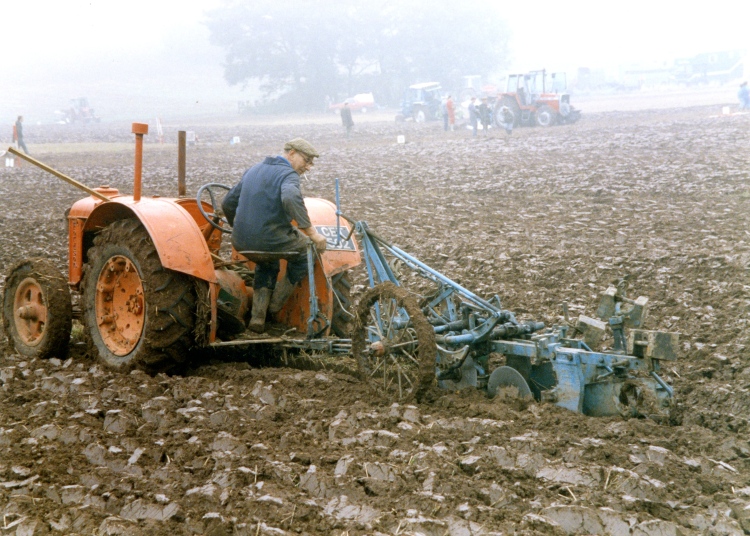 Those tractors that were in operation were not as well-equipped as Roger’s modern one from yesterday. 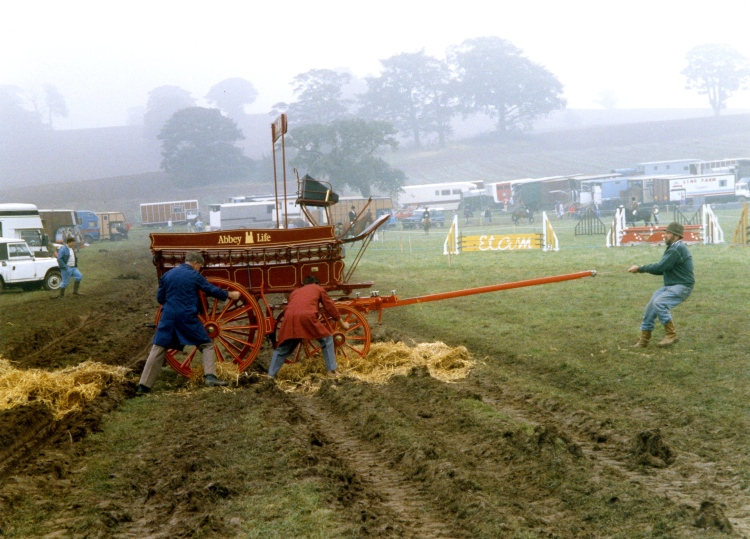 The Abbey Life cart became stuck in the mud. Watching the efforts to free it, I thought it unfortunate that all the heavy horses were otherwise engaged. 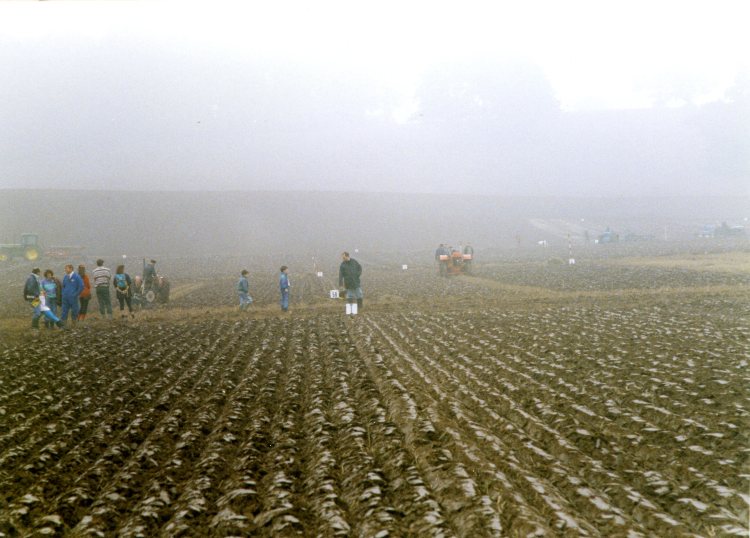 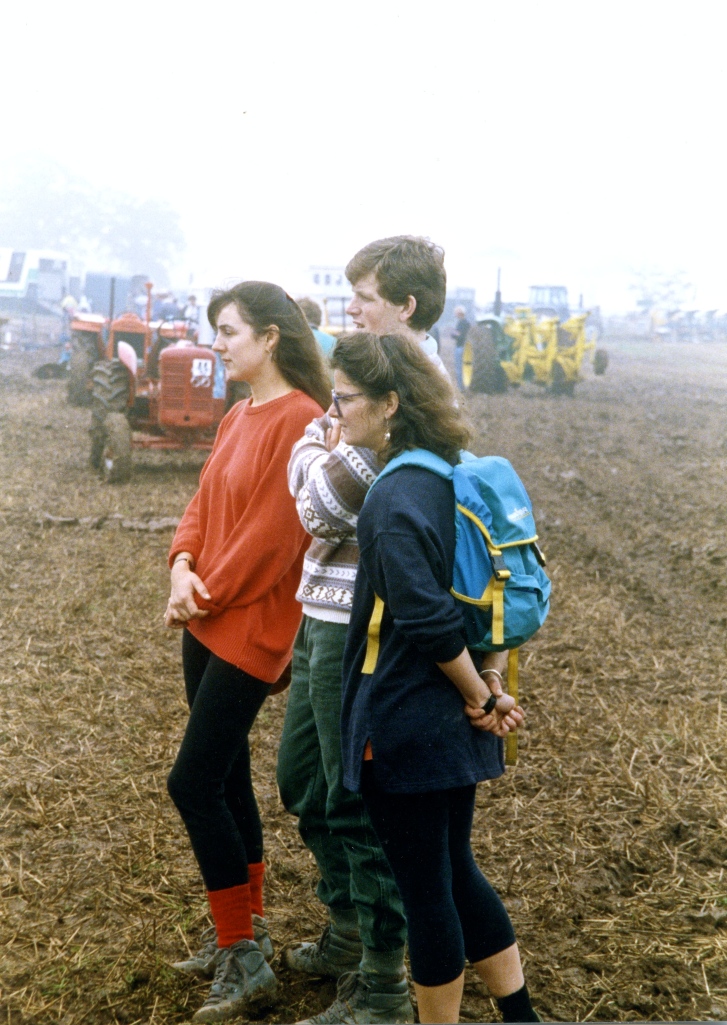 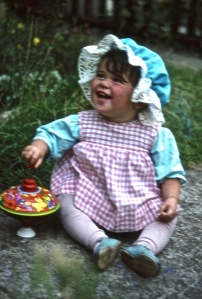 Jessica, Michael, and Heidi could be seen in the sparse distant crowd, and nearer at hand.

Backtracking a further 21 years in my slide collection, I traced a couple of out of focus photos of Becky in the original mob cap mentioned yesterday. This prototype was trimmed with lace from Jackie’s wedding dress. Here is the most acceptable image:

Sam, The Lady Plumber, came this morning and fitted new taps and hoses to the guest bathroom, and fixed the shower to the wall. She confirmed that the freestanding bath in our en suite room should be fixed to the floor, which it isn’t. Now we have an unblocked shower, we are unlikely to climb into it again. Apart from the two occasions mentioned on 24th April, this has never been used. It is free to anyone who would like it. Sam is quick, efficient, pleasant, and careful with your money. 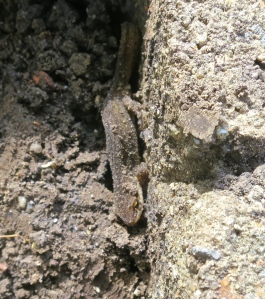 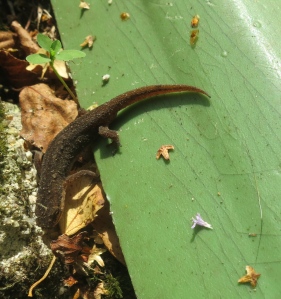 Having this morning established that I had, indeed, begun to unearth a complete row of concrete slabs yesterday, I set to and extracted a few more today. The future rose garden is looking more and more like a building site. Removing all the unwanted materials will be a long. slow, process.

As she was scraping earth from a building block that had been buried several inches down, Jackie disturbed a drowsy newt, hiding in a crevice. Very, very gingerly, she cleaned up the stone, and, with a trowel, transferred her amphibian friend to the side of one of our tiny ponds. She took the photographs herself.

Later this afternoon we bought a new shower head and flexible hose, from City Plumbing in New Milton, for the shower Sam had worked on, and went on to Curry’s at Christchurch to order a Kenwood dishwasher, the fitting of which will be our plumber’s next assignment.

It was, of course, Jackie who attached the shower head. Sadly, the Mapperly family will not be able to avail themselves of this facility tomorrow, because they all have bad colds and need to defer their visit.

This evening we dined at our local pub, The Royal Oak. I enjoyed possibly the best sirloin steak ever in an hostelry, whilst Jackie chose her favourite butterfly chicken. My dessert was apple crumble served in a cup with a jug of custard to dispense when you had made room for it. It was delicious. Jackie also enjoyed her Mississippi mud pie. She drank peroni and I drank an excellent rioja.

3 thoughts on “A Ploughing Contest”