A CLICK, WHICH CAN BE REPEATED, WILL ENLARGE ANY IMAGE

Today I scanned a dozen colour slides dated May 2008 from my Streets of London series. 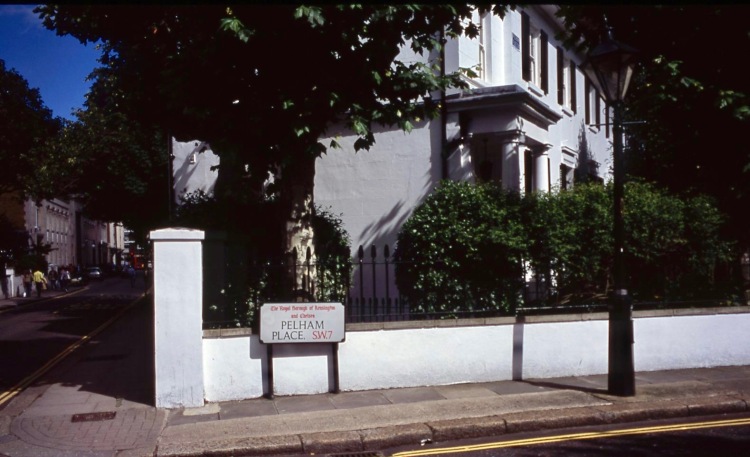 Wikipedia has these snippets to offer on Pelham Place SW7:

In 1950, the British-born American winemaker Peter Newton met his future wife, Anne St. Aubyn at a party in his house in Pelham Place.[4]

Mel Brooks briefly lived in Pelham Place in the 1950s, while working at the BBC on the Sid Caesar show.[5]

In 1967, Cecil Beaton photographed the model Twiggy wearing a yellow velvet dress by John Bates for Jean Varon[6] in the residence of 8 Pelham Place, for an editorial for Vogue[7]

A couple of years after I photographed this Chanel Store in Pelham Street, the Swedish fashion store rejoicing in the delightful name of Acne moved in next door. And Chanel is still there!

Kenzo, on the other hand, no longer seems to be resident in Ixworth Place, SW3. Perhaps the scaffolding drove them away.

Strong sunshine has burnt out the name of the street sharing this corner of King’s Road, Chelsea, where the mens’s and women’s clothing chain was having a sale. 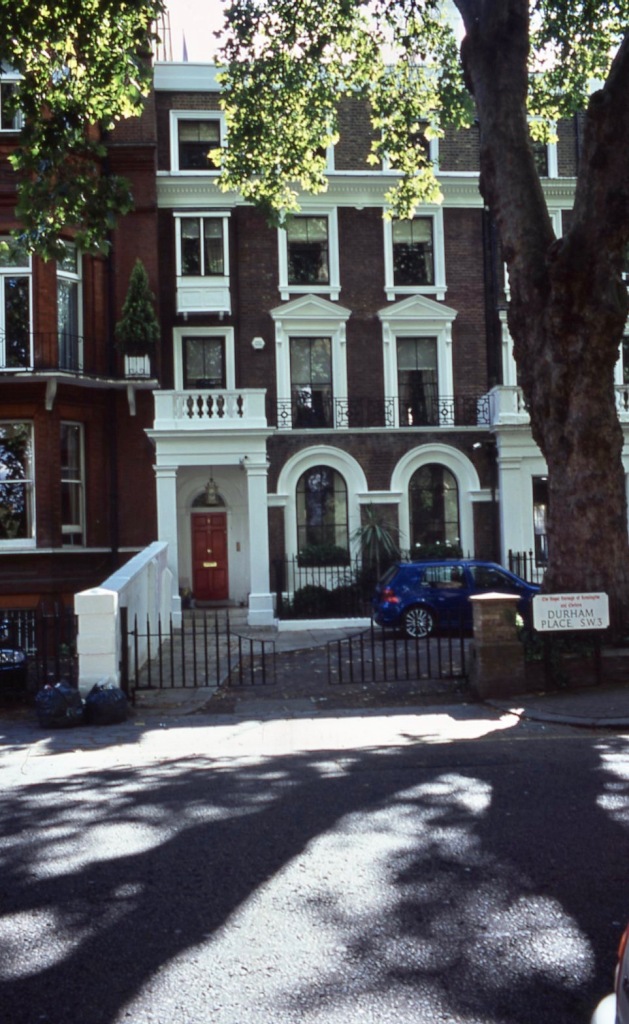 You would need a few million pounds to buy one of these houses in Durham Place SW3. 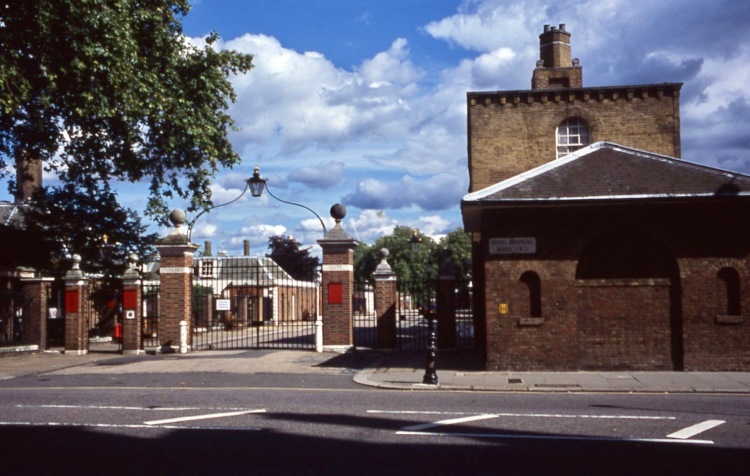 Wikipedia tells us that ‘The Royal Hospital Chelsea is a retirement home and nursing home for some 300 veterans of the British Army. It is a 66-acre site located on Royal Hospital Roadin Chelsea, London. It is an independent charity and relies partly upon donations to cover day-to-day running costs to provide care and accommodation for veterans.

Any man or woman who is over the age of 65 and served as a regular soldier may apply to become a Chelsea Pensioner (i.e. a resident), on the basis they have found themselves in a time of need and are “of good character”. They must not, however, have any dependent spouse or family and former Officers must have served at least 12 years in the ranks before receiving a commission.’ 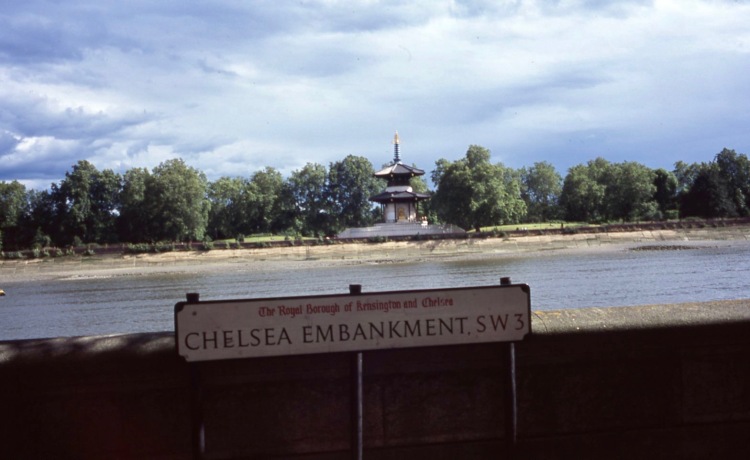 Across the River Thames from Chelsea Embankment lies Battersea Park in which stands the Peace Pagoda. http://news.bbc.co.uk/local/london/hi/people_and_places/religion_and_ethics/newsid_8091000/8091765.stm contains this information:

‘At a time when the Cold War and the fear of a nuclear attack were escalating the offer of a Peace Pagoda to promote world harmony seemed appropriate.

It was offered to the people of London by the Nipponzan Myohoji Buddhist Order as part of the 1984 Greater London Council (GLC) Peace Year.

Nipponzan Myohoji is a religious movement that emerged from the Nichiren sect of Japanese Buddhism.

They have been constructing Peace Pagodas, as the spiritual focus to unify the movement for peace, since 1947 and they exist all around the world including Europe, Asia and the United States.

The pagoda in Battersea was built by monks, nuns and followers of Nipponzan Myohoji at the behest of The Venerable Nichidatsu Fujii (1885-1985), founder of the organisation.’ 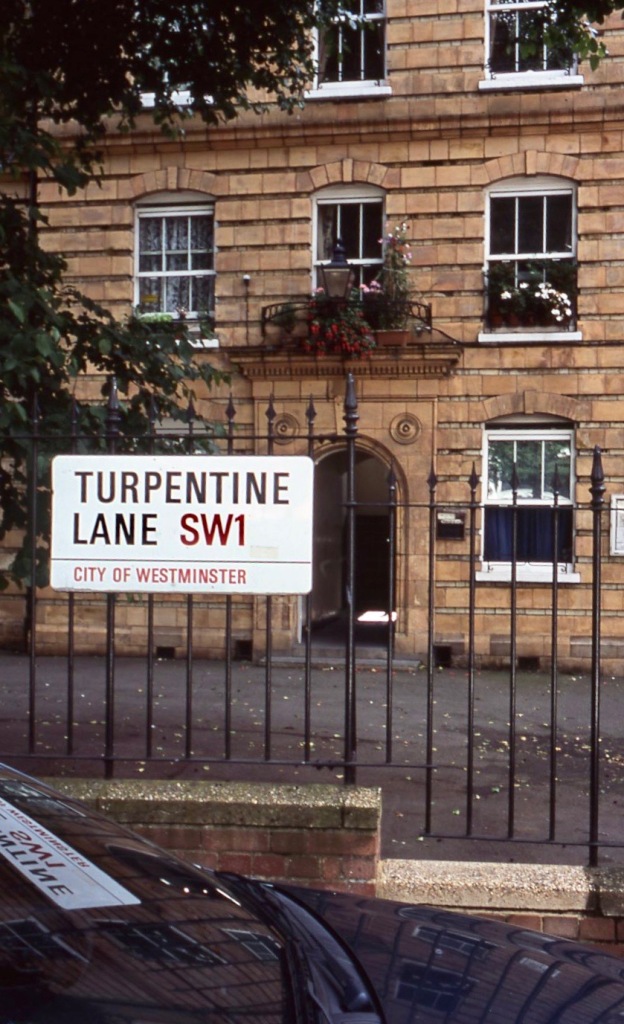 The Trust’s website, detailing all the estates describes Pimlico thus:

Pimlico is one of our oldest estates. The first 26 blocks date from 1876 – and we can learn about the early tenants from the national census taken every 10 years. In 1881 around 2,000 people lived there, many of them working in the nearby Chelsea Barracks. There were also lamplighters, messengers, charwomen, policemen and plumbers, while Charles Sutton, who lived in C Block, was employed as a porter at Buckingham Palace.

Pimlico is one of four of our estates to have a plaque commemorating those who died on active service in the First World War. In November 2005 a Channel 4 TV series, entitled Not Forgotten, featured the war memorial. Presenter Ian Hislop interviewed the granddaughter of William Buckland, the first man on the estate to be killed.

During the Second World War, the estate received a visit from Prime Minister Winston Churchill, who came to see the damage caused by an air raid.

New blocks were built on the Pimlico estate in 2011. They were officially opened by HRH the Duke of York in November 2012.’

‘The White Ferry House brings a traditional country pub vibe to the centre of London. The venue is housed in a stunning Victorian ‘flat-iron’ building and comes steeped in history, with a network of passages historically used to smuggle baccy, rum and gunpowder to the river buried below its foundations.’ It stands on the corner of Sutherland Street and Westmoreland Terrace SW1.

the iconic Battersea Power Station, visible across the river from Ebury Bridge SW1, now has a quite different purpose than originally envisaged.

63 thoughts on “Rambling Round Chelsea And Pimlico”