This morning I walked along Hordle Lane, turning left into Stopples Lane. I had hoped to walk across the fields and woods to Peter’s Farm, but could not find my way through. In the spring, I must have traversed a gap in the hedge which is now overgrown. Today, I followed the fenced off wood until I reached the houses, then retraced my steps. 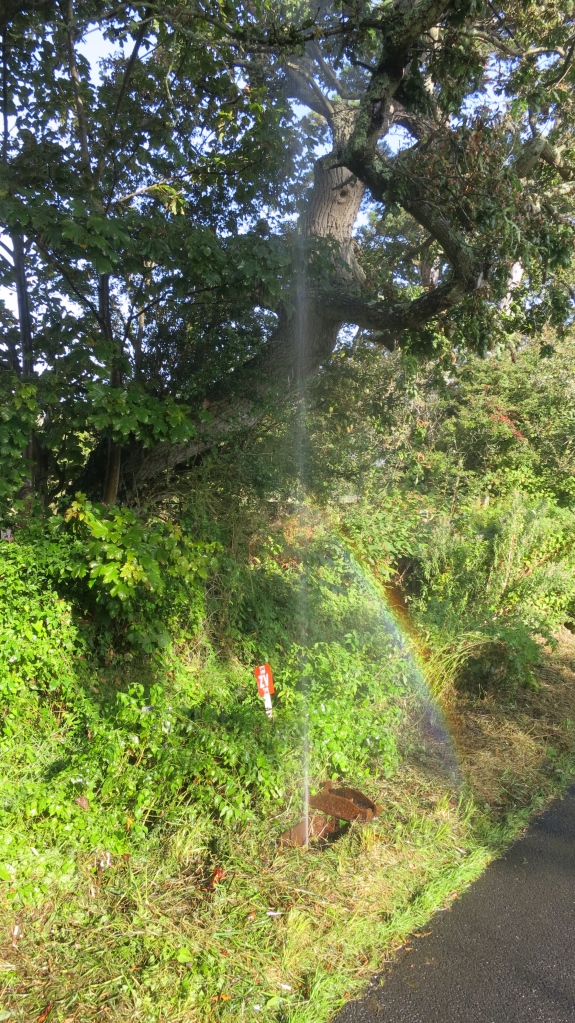 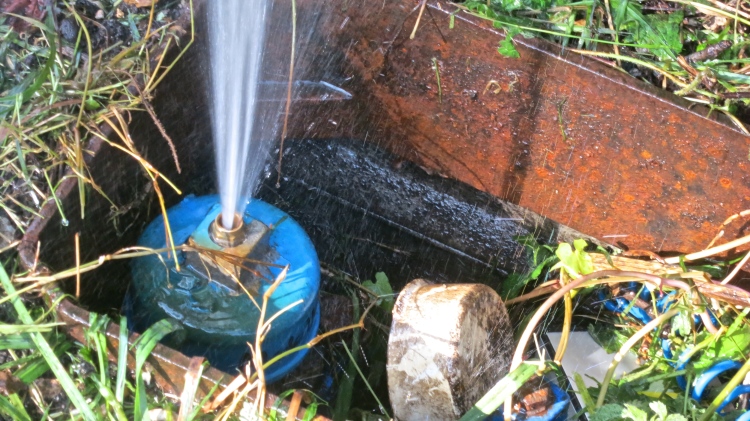 Just before the paddock I heard, then saw, a spire of water, casting a rainbow, shooting straight up into the tree above. Upon investigation, during which I was liberally sprinkled, I noticed that a valve had, perhaps deliberately, become disconnected. 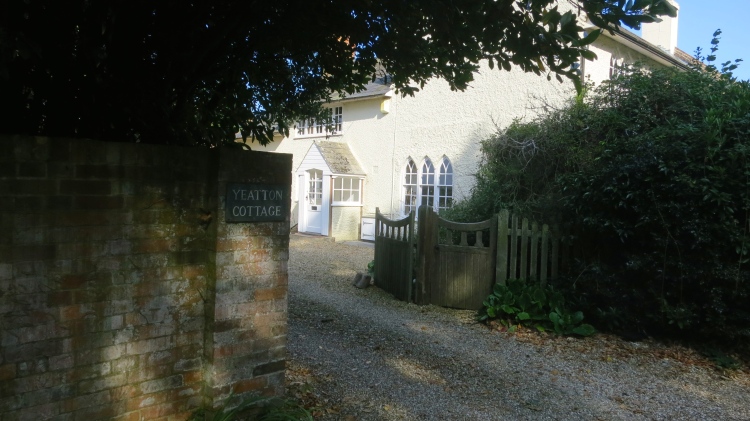 I knocked at the door of Yeatton Cottage and alerted a resident who undertook to contact the water board. This young woman told me that the large horses did not belong to her and her husband, 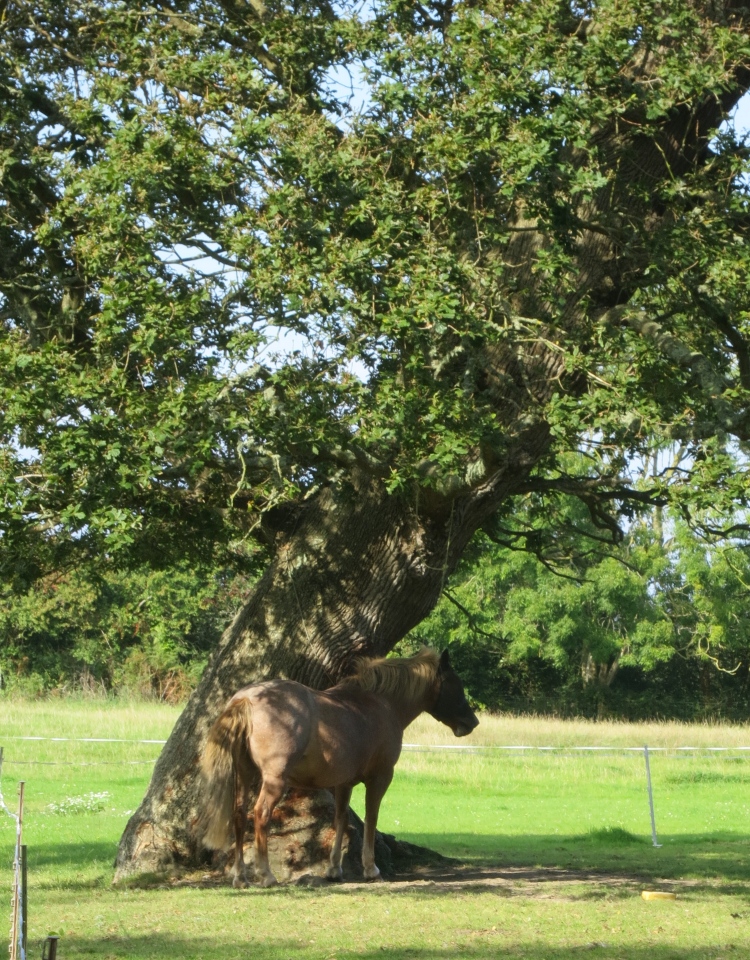 although the field and a Shetland pony did. One of the horses, sheltering under an oak, was well camouflaged.

I twice met a jogger, and gave her a running tip, for which she was grateful. 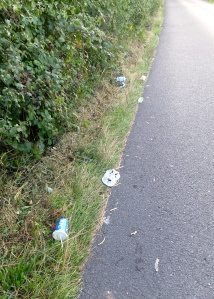 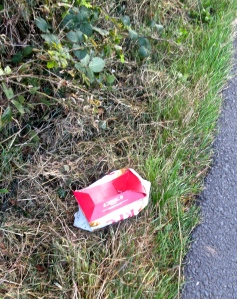 The verges on both sides of Hordle Lane are littered with debris from food to go. Why, I often wonder, do people come to such a beautiful spot and chuck their rubbish out of their car windows? 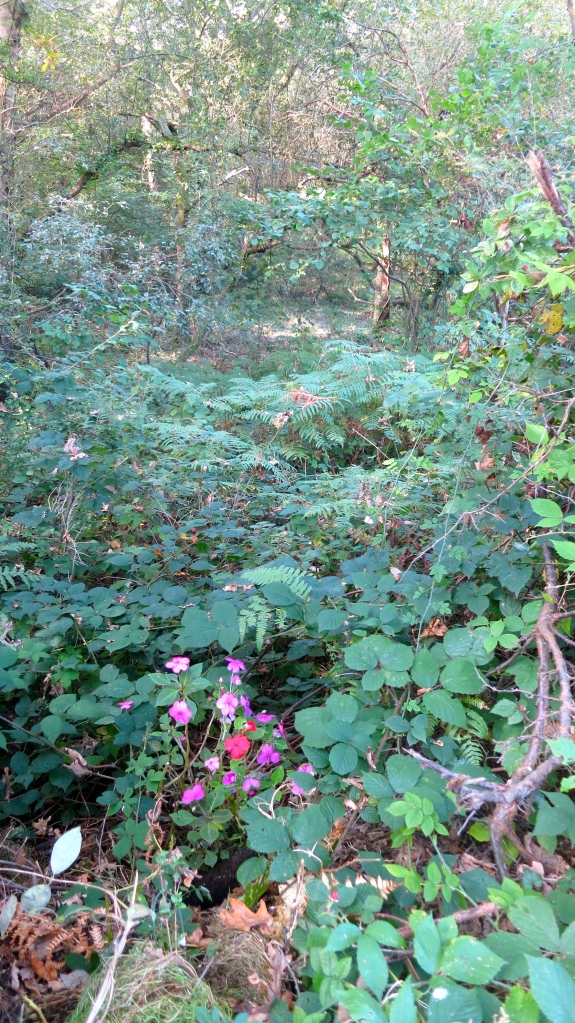 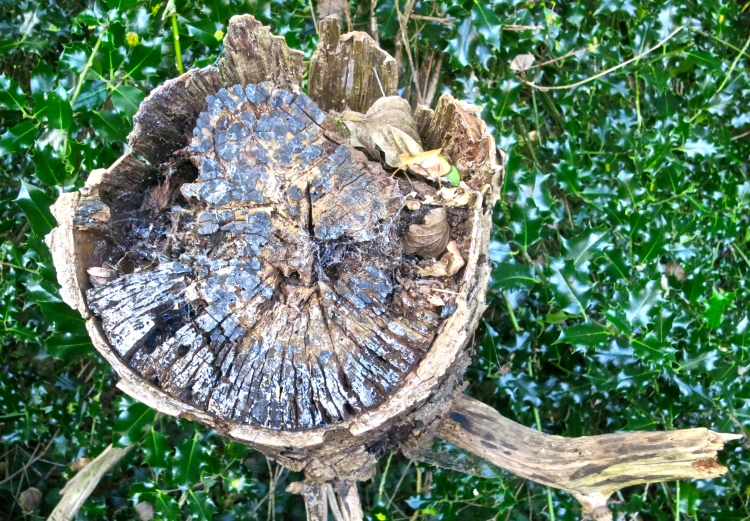 Impatiens grew in the wood. Perhaps someone had dumped their garden refuse into this area, with a much more pleasing result. A natural insect hotel created by the section of a dead tree was open for guests. 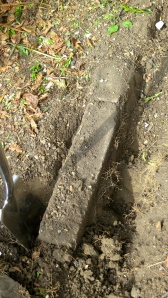 Soon after this I began the last push in preparing the rose garden. This involved the two of us transplanting a straggly rosemary bush and a cluster of crocosmia. Digging over the soil is likely to take some considerable time. The small area I worked on today, especially that which had been covered by paving for so many years, had the consistency of iron, and contained copious amounts of couch grass and its sinuous trailing roots. I unearthed another slab of concrete and a few more bricks. Just as I was thinking that I would probably find more before the job was done, I discovered another row of the concrete embedded on its side. Having been unable to shift even the first slab, in the absence of my  Jack Russell substitute, and as Jackie was calling me in to share a six-egg omelette, stuffed with onions and mushrooms, for a late lunch, I decided to call it a day. She said there was no rush to complete this task which could be done ‘at [my] leisure – if that’s the right word to use’.

This afternoon we were visited by Sam, The Lady Plumber, who came to look at the work needed on our guest bathroom before Louisa, Errol, Jessica, and Imogen come for the weekend. Sam(antha) was friendly, quick, and efficient. Maybe she could have fixed this morning’s valve. She will do our work on Thursday.

This evening I lit and tended a bonfire. Many more will be required before the produce of four months of sawing, pruning and clipping has been burnt.

Jackie’s luscious chicken curry and savoury rice was what we enjoyed for dinner. It was followed by lemon and lime merangue pie and evap in her case, and lemon drizzle cake and custard in mine. I finished the chianti, and she drank some Hoegaarden.