Cloudy sunshine and blustery winds greeted us this morning. I ambled around the garden and just a yard or two into Downton Lane where the minute flowers of the Galium aparine, known among other things as Sticky Willy, that we are trying to eradicate from our garden, are clambering around the verges; and where I met another group of radiant ramblers:

In the garden we now have: 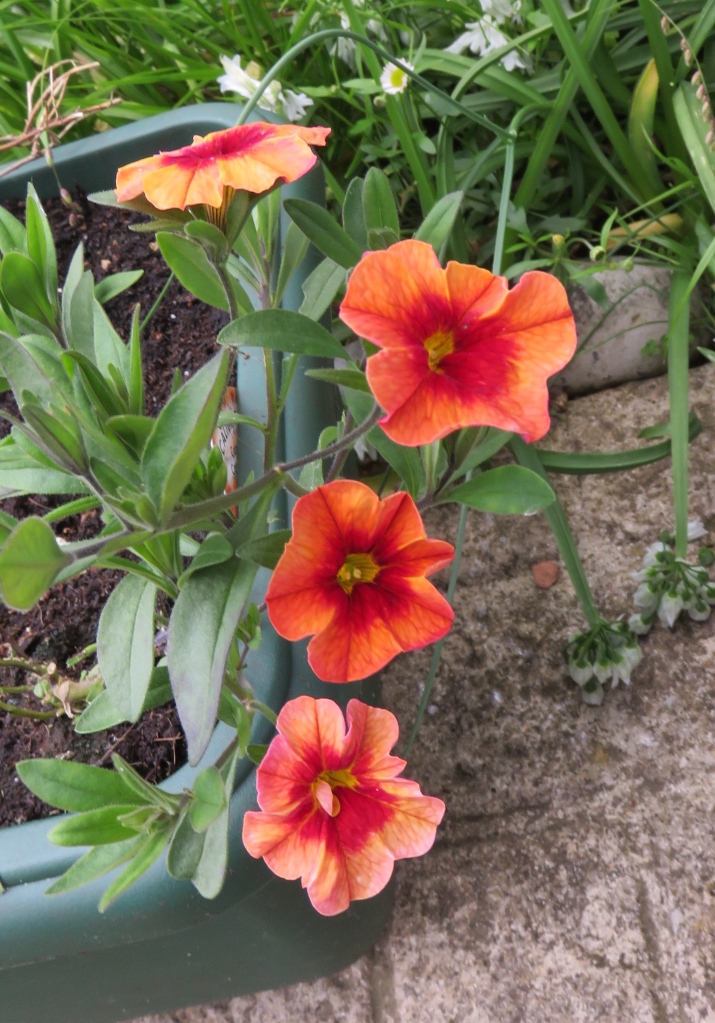 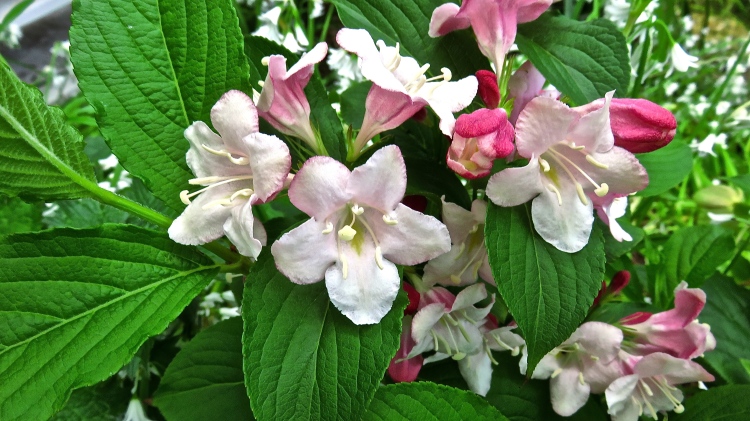 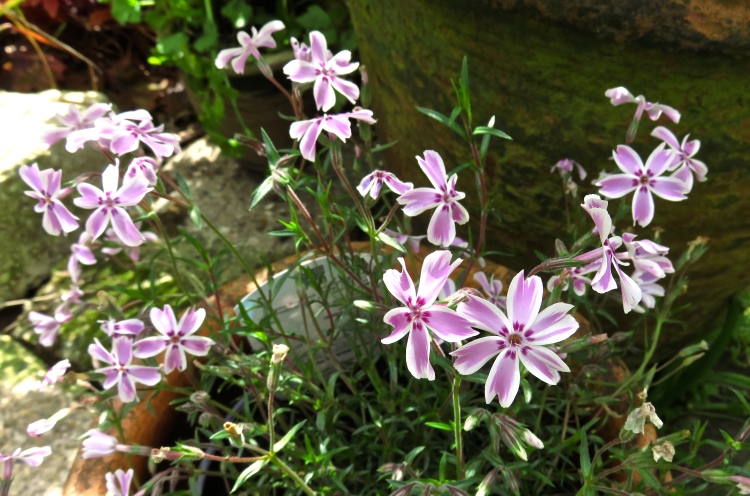 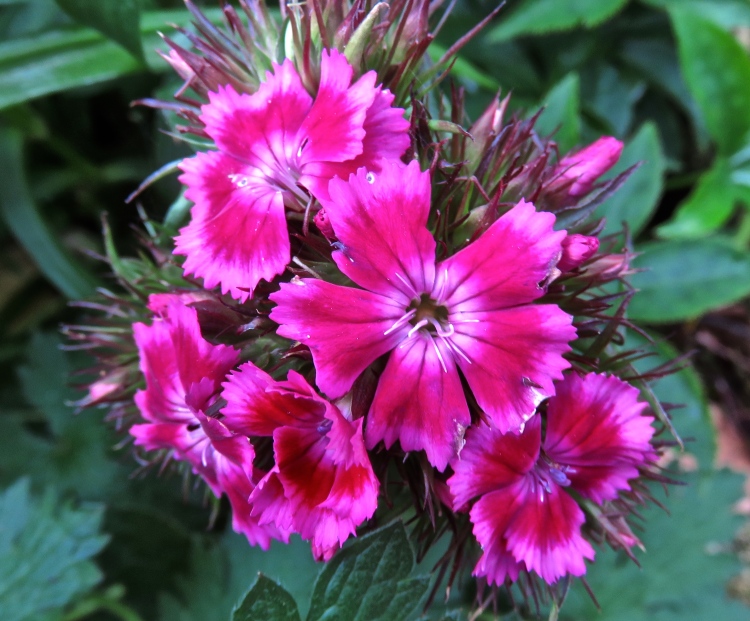 We have not yet been able to identify this shrub which has wrinkled leaves. (Chris Poole later identified it as Viburnum Bodnantense.).

Jackie enjoys transplanting flowers from one area to another, often preserving those peeping up from paths. An example is the erigeron, plucked from the patio and placed in the former compost bed. She also popped a stem of watercress into the Waterboy’s pool. 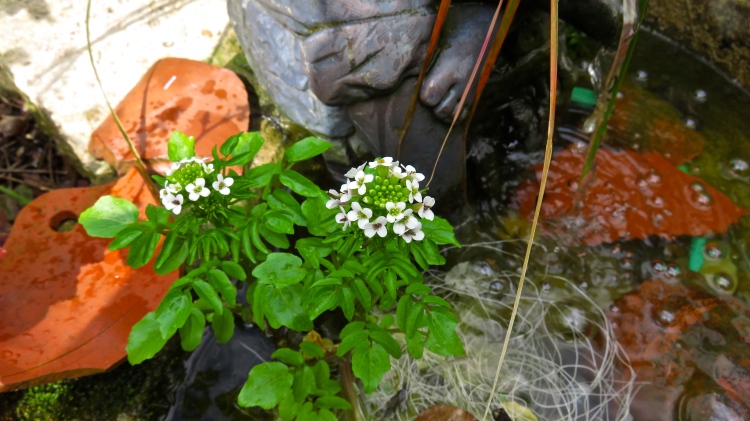 It has rooted, flowered, and proliferated.

The head gardener has brought out a tray of tomato seedlings she has nurtured indoors.

We now have another clematis, similar to the one that rambles over our next door neighbours’ fence. This one climbs up the gazebo, so we also benefit from it.

The flower of the clematis is in fact the central section.

What we take for its colourful petals are in fact modified leaves or sepals.

Perhaps the most surprising of our new arrivals could be the offspring of the toad Jackie disturbed last autumn. Spawn has arrived in the tiny pool created by our predecessors from a domestic cistern.

We don’t have any sunflowers yet, but it seems they do in Razac d’Eymet where our friend Judith Munns has just sold this stunning, beautifully composed painting: 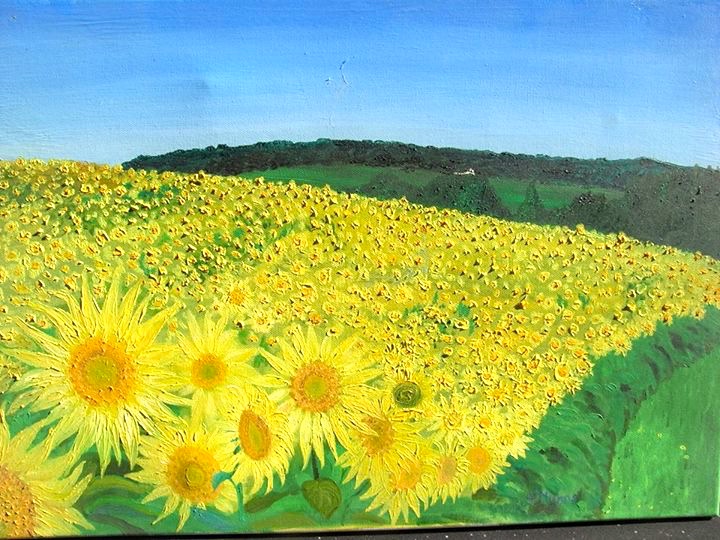 One of Judith’s Facebook friends has likened it to the work of Vincent Van Gogh. Maybe that would require a swirly sky. 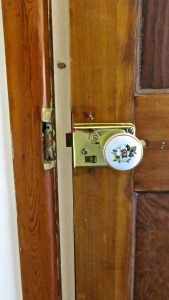 Lee Wilkinson, a joiner recommended by Aaron, today fitted stair rails on our rather steep cottage style route to bed. The paint on the treads and risers is just one piece of decoration we need to change when we get round to it. He also widened the jamb of the door into the master suite. It required the addition of the unvarnished strip of wood simply for the door to reach it. We have never possessed the keep for the Manx lock, but, as can be seen in the photograph, it could never have been correctly placed anyway. We will need to search one out. The red paint on the lock is an example of what we find everywhere, and why redecoration will be quite a major job.

This evening we enjoyed the usual friendly atmosphere and excellent food and service of Totton’s The Family House, for our dinner. We both drank Tsingtao beer