Wollaton Hall is an Elizabethan country house of the 1580s standing on a small but prominent hill in Wollaton Park, Nottingham, England. The house is now Nottingham Natural History Museum, with Nottingham Industrial Museum in the out-buildings. Its additional interest for us is that Noel Gervis Pearson, a great great grandfather of Louisa’s two children donated a butterfly collection to the museum sometime in the early twentieth century. 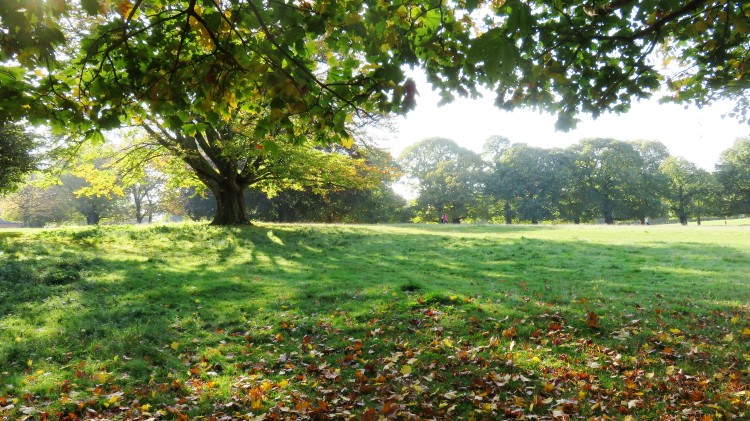 Louisa, Jessica, Imogen, and I spent a gloriously mild and sunny morning and early afternoon wandering the deer park and visiting the house. 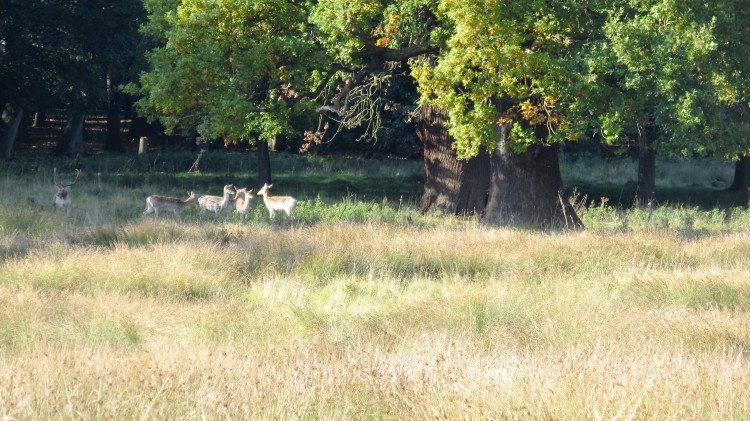 Noticing the stags basking in the sunshine, and the does caring for their offspring under the trees, Louisa observed, in a telling fashion, that they were carrying out traditional male and female roles.

In our attempts to approach the young cervine family, we reached a very boggy stretch. The girls thought it would be quite fun to see Grandpa clambering along the logs. Grandpa didn’t think so. He wasn’t wearing sensible footwear. He took the long way round.

There has to be a lake in a country house garden. This one attracted many water fowl. 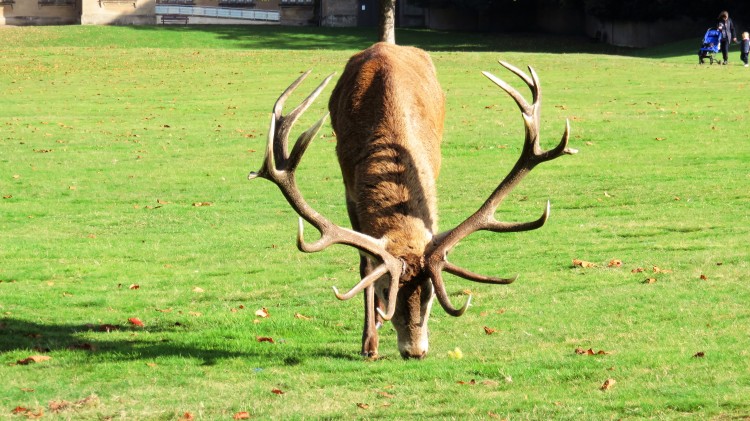 On the approach to the house, a large, grazing, stag attracted numerous lenses.

In the building, the girls spent a pleasant time hunting out exhibits and completing a linked Halloween quiz. I thought expecting them to work out an anagram of CAULDRON was a bit tough. Easy peasy for Mordred, of course. 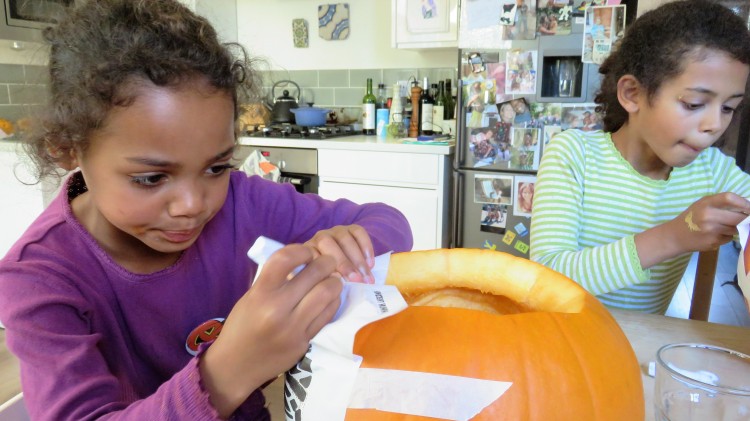 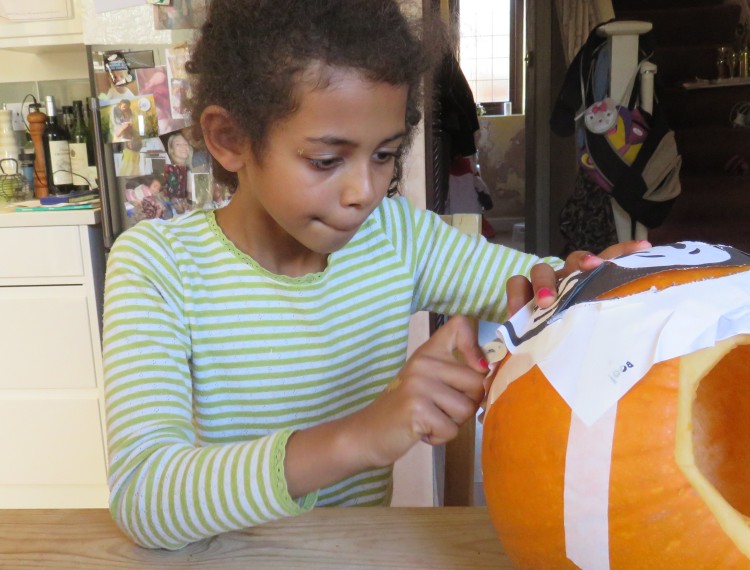 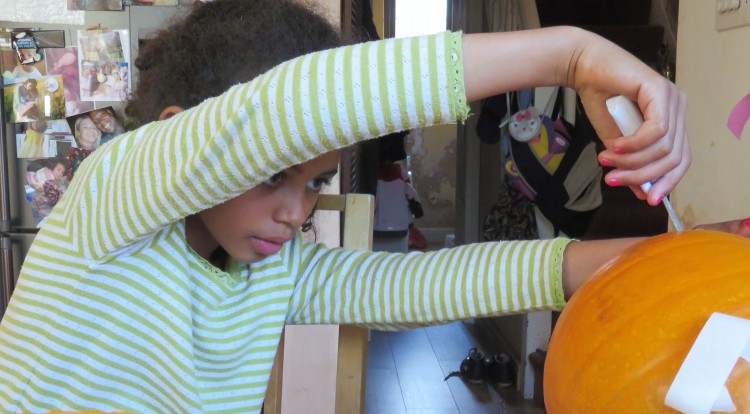 After lunch, it was time to carve the pumpkins. Using templates from a book, Jessica produced a more than creditable ghost, but Imogen’s went ‘a bit wrong’. She had a most impressive stab at an ancient mummy, the most complex design of all; then recognising that she had bitten off more than she could chew, she made her own drawing for the other side of the pumpkin. This time, Louisa cut out the necessary sections.

For dinner, we travelled by bus to Pizza Express in Nottingham. This outlet has come on apace since the first one was opened in Soho’s Wardour Street in 1965. There were a number of entertaining activities for the children to complete whist waiting for their food. One of these was the creation of their own Halloween masks. 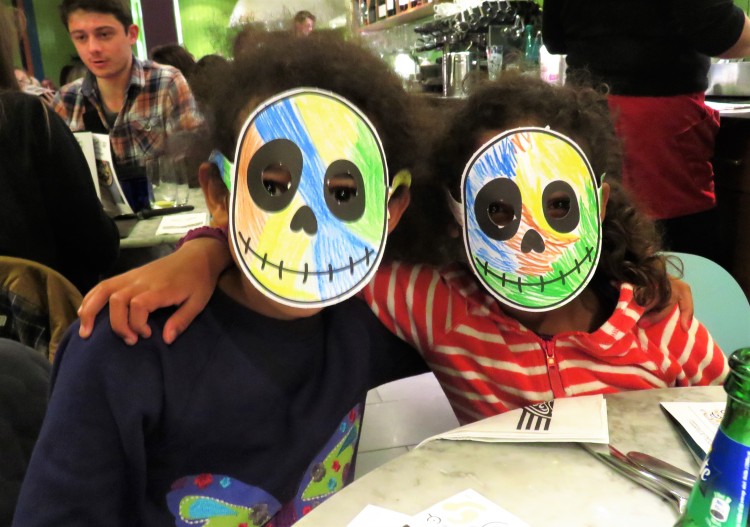 After Jessica and Imogen were photographed wearing theirs, Louisa and I had to borrow them.

My choice of pizza was American Hottest Romana.

On leaving the restaurant, we discovered there was a 25 minute wait for the next bus, so we caught a cab back. This impressed Imogen who kept saying she had never been in a taxi before.

52 thoughts on “Pumpkins And Pizzas”