This morning we bought another parasol for the South end gravelled patio.

After lunch, The Head Gardener watered and I dead-headed The Rose Garden. Here there are two examples of similar but different flowers that she has been pointing out recently.

These are For Your Eyes Only

Other manifestations are these two hydrangeas. Apart from the subtly different hues, can you spot the difference?

When Jackie and I visited Wimborne Minster on 23rd November 2013, we could not access the Chained Library. This was, however, possible for her and her sisters when they were staying near there recently.

Helen bought me a copy of W. A. (Frank) Tandy’s small booklet, which I finished reading today.

Tandy provides a brief introduction to the practice of chaining library books, and details of those, mostly dating from the 16th to the 18th centuries, contained in Wimborne Minster. The earliest volume in the collection is “Regimen Animarum”, a manuscript written on vellum, dated 1343. The books cover other subjects than the expected ecclesiastic ones. Gardening, science, and medicine are examples. I found it fascinating to discover that Sir Thomas Browne’s “The Pseudodoxia Epidemica of 1672” ‘examines the theory that a female bear gives birth to a lump of fat which she then licks into the shape of the cub she wants; it is from this that the expression ‘licking into shape’ originates’.

This illustration comes from a mediaeval bestiary, Bodley 764, taken from Pinterest.

In mediaeval times, and the early years of printing, many books were extremely valuable. Most were bound in wooden boards making it possible to chain them in the manner thus described by Wikipedia:

‘A chained library is a library where the books are attached to their bookcase by a chain, which is sufficiently long to allow the books to be taken from their shelves and read, but not removed from the library itself. This would prevent theft of the library’s materials.[1] The practice was usual for reference libraries (that is, the vast majority of libraries) from the Middle Ages to approximately the 18th century. However, since the chaining process was also expensive, it was not used on all books.[2] Only the more valuable books in a collection were chained.[2] This included reference books and large books.[2]

It is standard for chained libraries to have the chain fitted to the corner or cover of a book. This is because if the chain were to be placed on the spine the book would suffer greater wear from the stress of moving it on and off the shelf. Because of the location of the chain attached to the book (via a ringlet) the books are housed with their spine facing away from the reader with only the pages’ fore-edges visible (that is, the ‘wrong’ way round to people accustomed to contemporary libraries). This is so that each book can be removed and opened without needing to be turned around, hence avoiding tangling its chain. To remove the book from the chain, the librarian would use a key.[3] 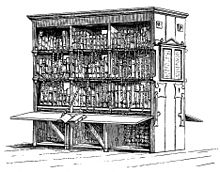 The earliest example in England of a library to be endowed for use outside an institution such as a school or college was the Francis Trigge Chained Library in Grantham, Lincolnshire, established in 1598. The library still exists and can justifiably claim to be the forerunner of later public library systems. Marsh’s Library in Dublin, built 1701, is another non institutional library which is still housed in its original building. Here it was not the books that were chained, but rather the readers were locked into cages to prevent rare volumes from ‘wandering’. There is also an example of a chained library in the Royal Grammar School, Guildford as well as at Hereford Cathedral. While chaining books was a popular practice throughout Europe, it was not used in all libraries. The practice of chaining library books became less popular as printing increased and books became less expensive.[3]Wimborne Minster in Dorset, England is yet another example of a Chained Library. It is one of the first in England and the second largest.[4]‘

As I entered this onto WordPress, I enjoyed the scent of our sweet peas standing on my window sill.

This evening we dined on Jackie’s vegetable rice salad with cheese-centred fish cakes. My lady drank Hoegaarden and I drank Kingfisher.

P.S. Cynthia Jobin’s comment below has some interesting additional information on early books.

63 thoughts on “Licking Into Shape”