The lower temperature brought a cooler and more pleasant day on which The Head Gardener continued her creative planting, serious weeding, and cutting back. I dead-headed roses, carted debris to the compost heap, and made a few pictures. 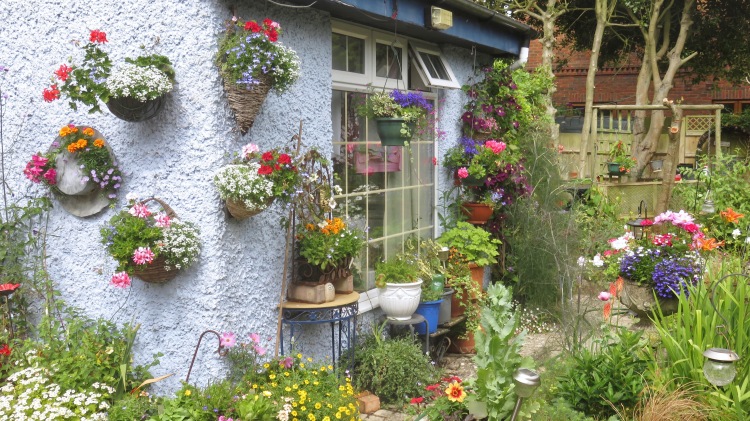 The planting on the kitchen wall now seems complete. But you can never be sure. It might be possible to squeeze in something else.

Surely, however, the corner viewed from the patio has more than its share of hanging baskets

and a profusion of pots beneath them. 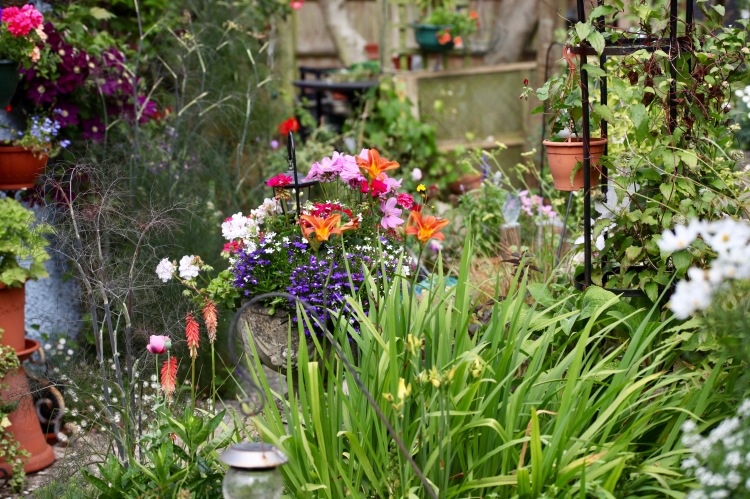 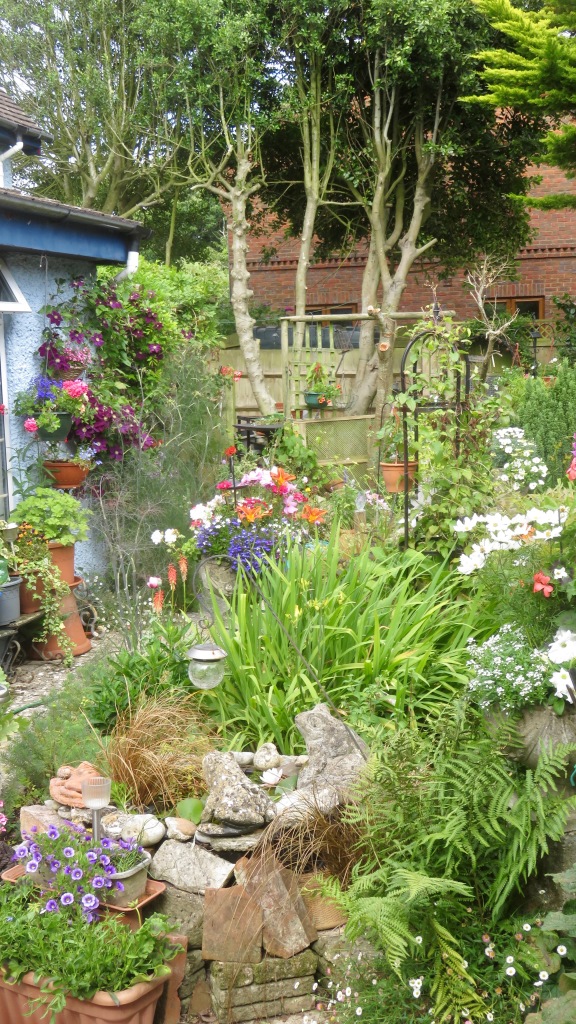 Even the kitchen window reflects its eponymous bed.

This is the stone urn standing behind the frog pond on the patio end. 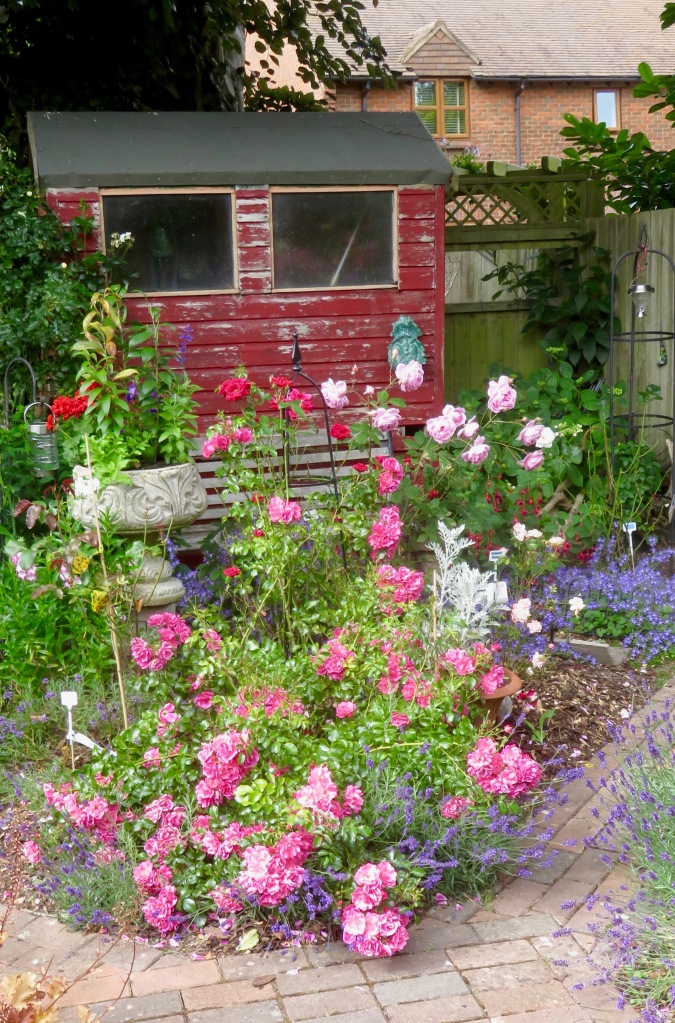 We have a number of carpet roses which provide a profusion of ground cover. This one in the Rose Garden flirts with Love Knot and Alan Titchmarsh.

Some of you may prefer Hot Chocolate. 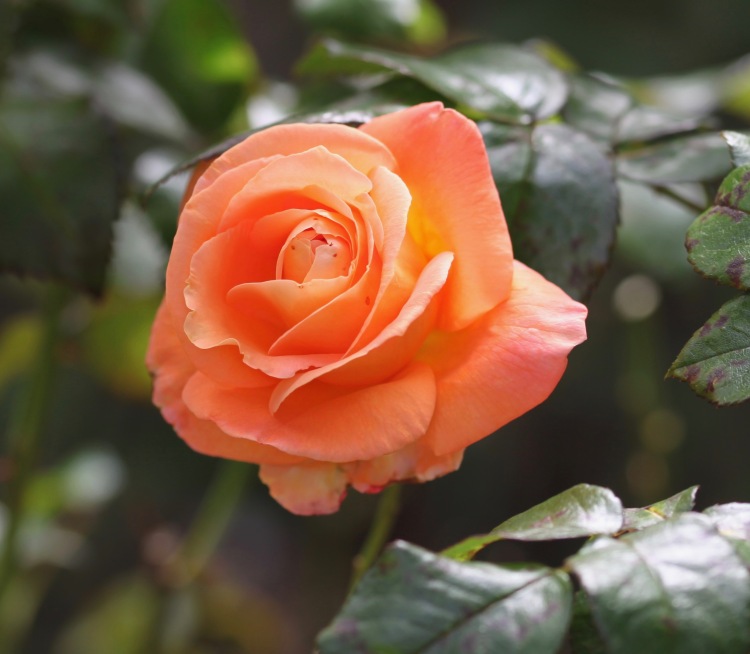 and, Emma Hamilton hangs her heavy head into the arms of Absolutely Fabulous. 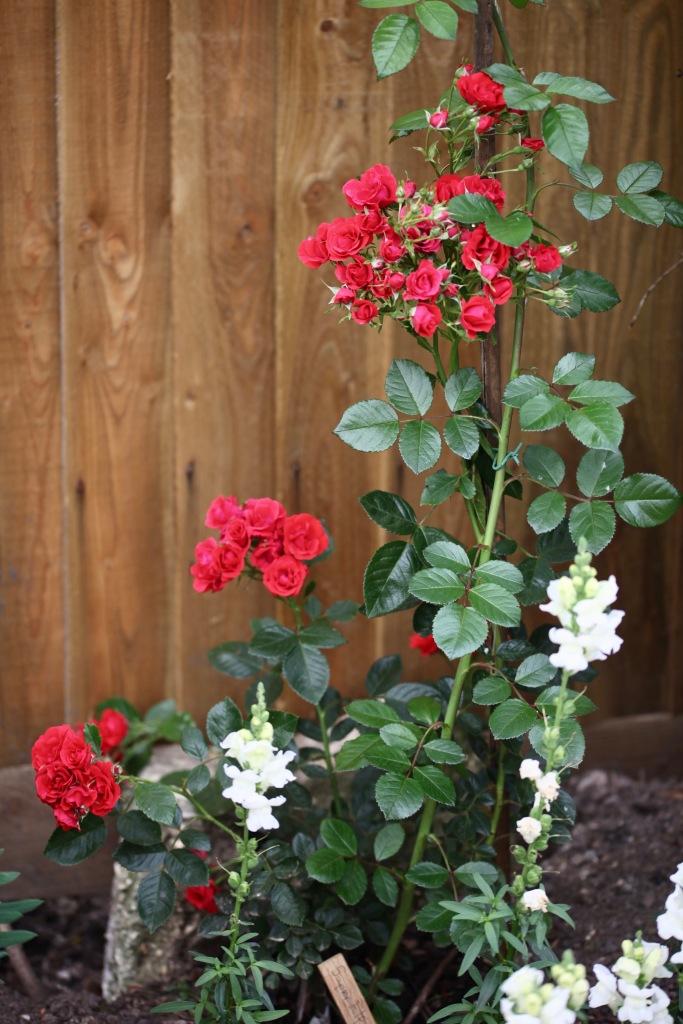 Super Elfin, the red rambler in the herbaceous border, virtually uprooted by the beast coming under the North Breeze fence, has benefited from our deterrents and promises to climb to dizzy heights. 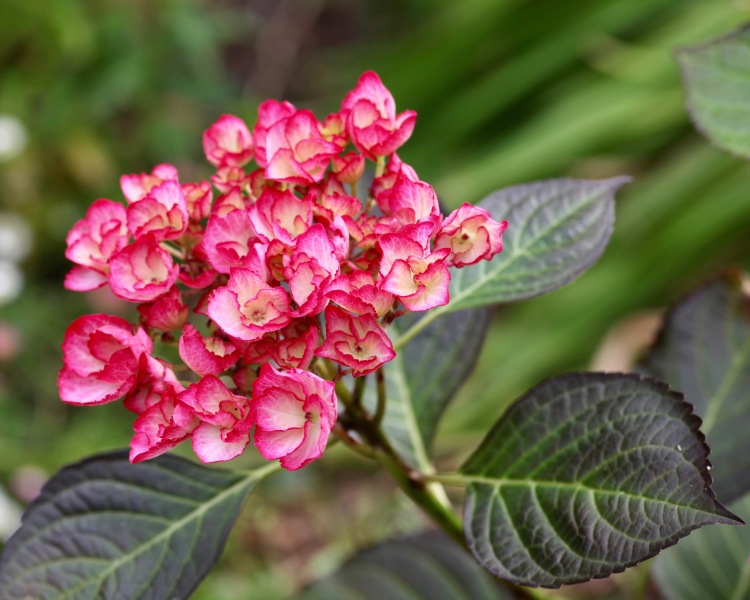 Of all the spindly little plants that have received nurture from Jackie, she is justifiably proud of two colourful hydrangeas with dark-trimmed leaves. 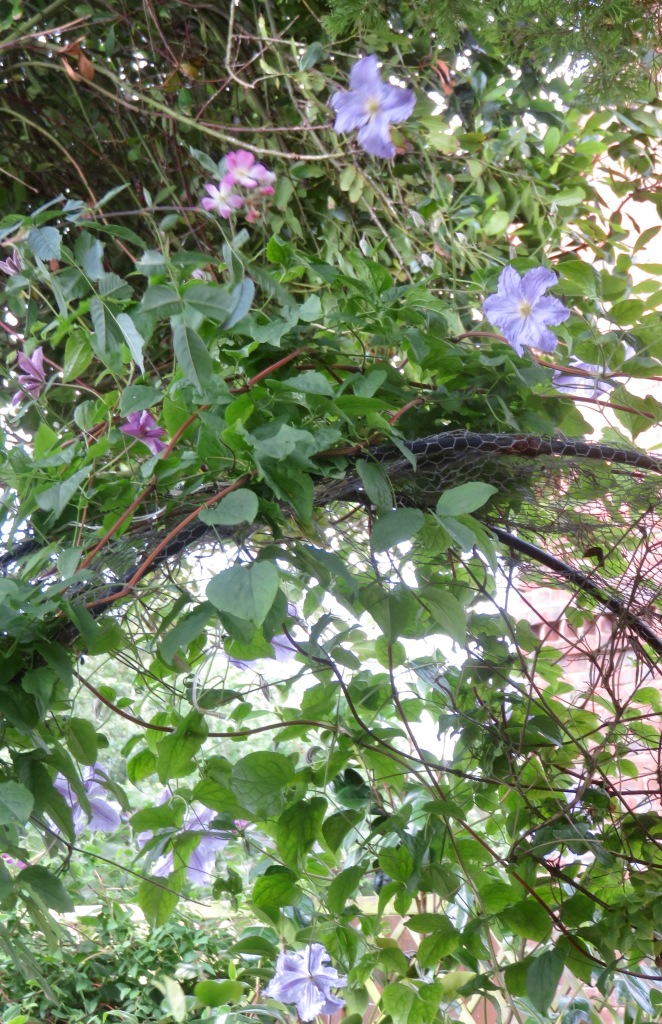 It has taken two years to train this clematis, now mingling with rosa glauca on the arch spanning the Head Gardener’s Walk. 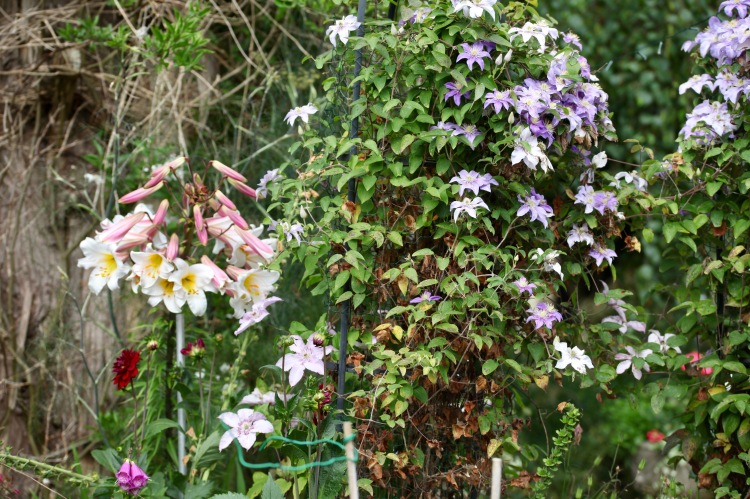 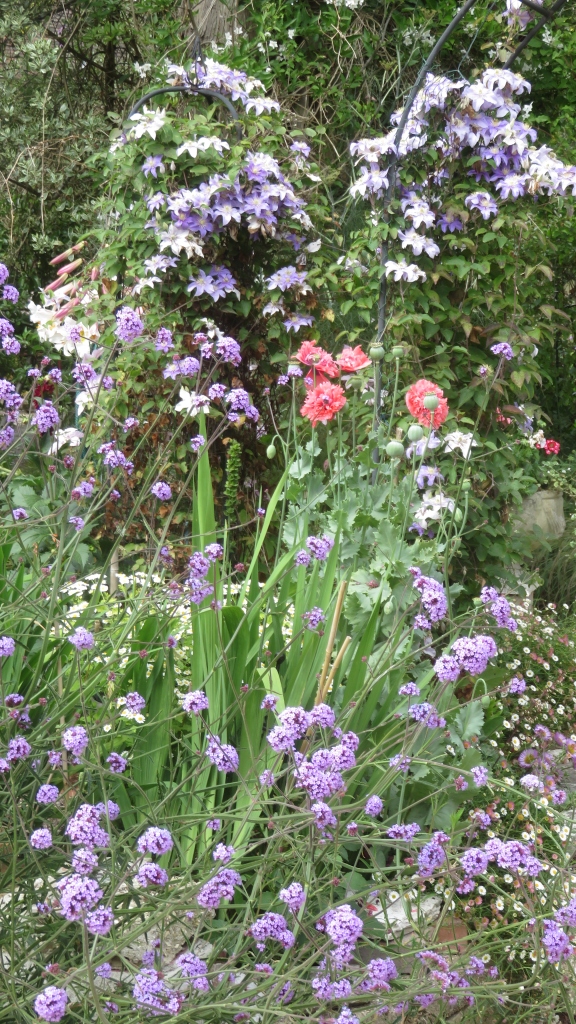 The New Forest is not new. It was, after all where William Rufus, son of William the Conqueror, was killed. But, like Jackie’s New Bed, now two years old, it was once. Both are ageing gracefully.

Did you, as a child, ever have a kaleidoscope toy? If so, I imagine you could have produced something like this verbena, nature’s own. We have many antirrhinums. Here is a red one.

Jackie took the occasional rest. Sometimes she sat on the Ace Reclaim bench where she could admire her plantings such as the petunias in this hanging basket; 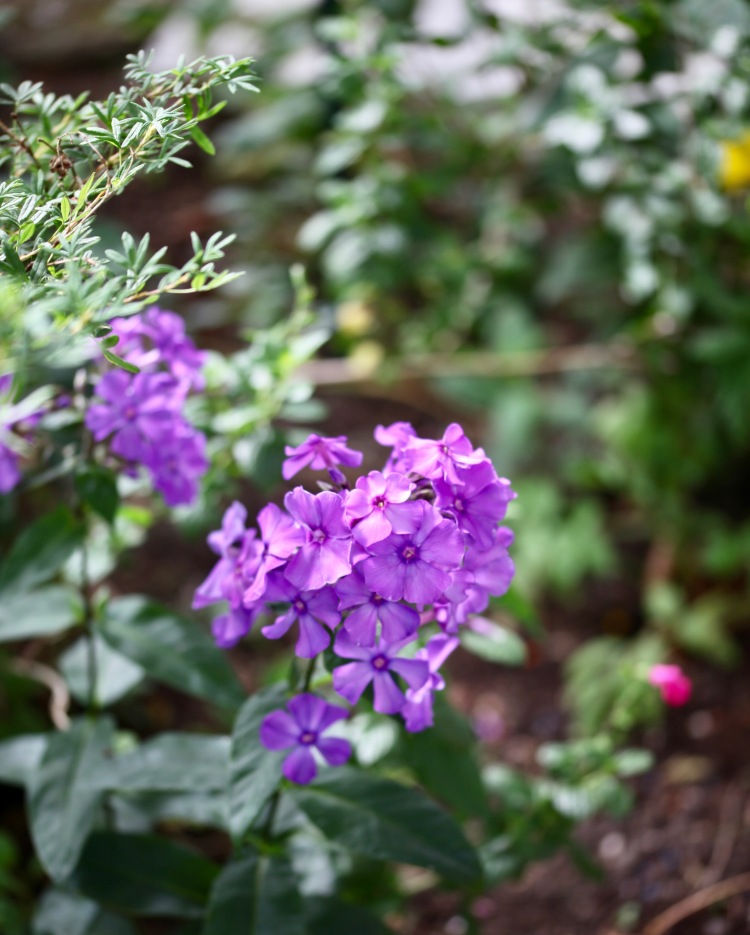 the blue phlox in the bed facing her; 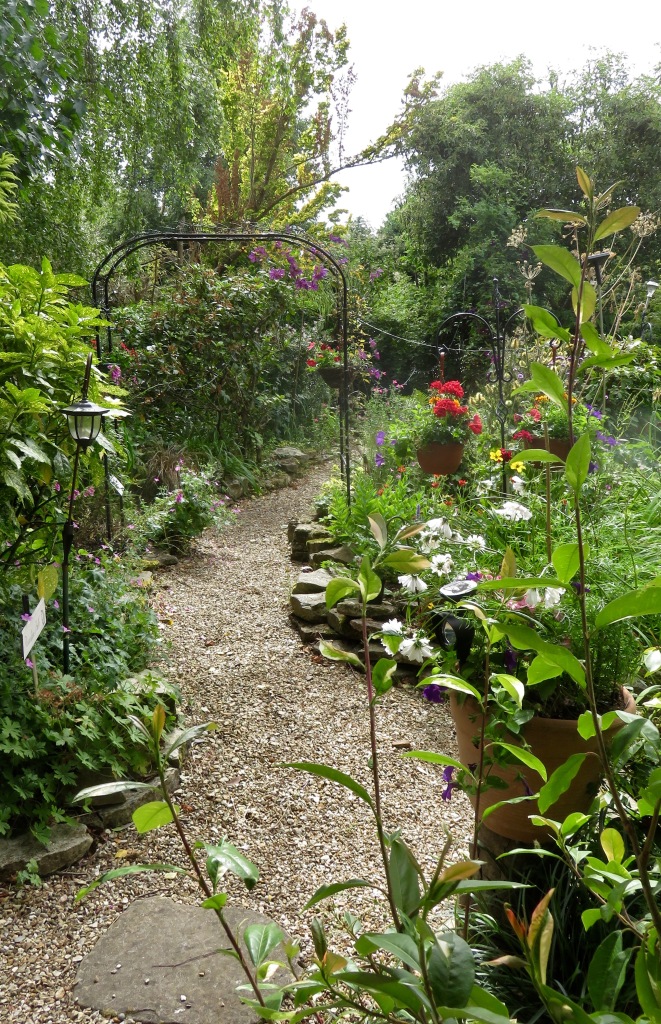 and the view across Margery’s bed with its proliferation of day lilies,

other examples of which are these.

Did you spot both smiles?

This evening, the friendly Mr Chan produced our meal, which Jackie collected from Hordle Chinese Take Away. I finished Jessie’s excellent Chablis.