After the usual weeding and tidying in the garden, Jackie drove us out into the forest, where we eventually lunched at Hockey’s Farm in South Gorley. 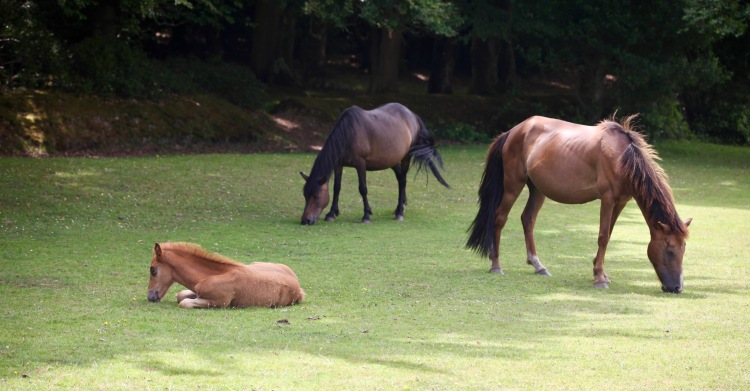 We travelled via Nomansland where I communed with a disinterested group of ponies cropping the grass beside a recumbent foal. 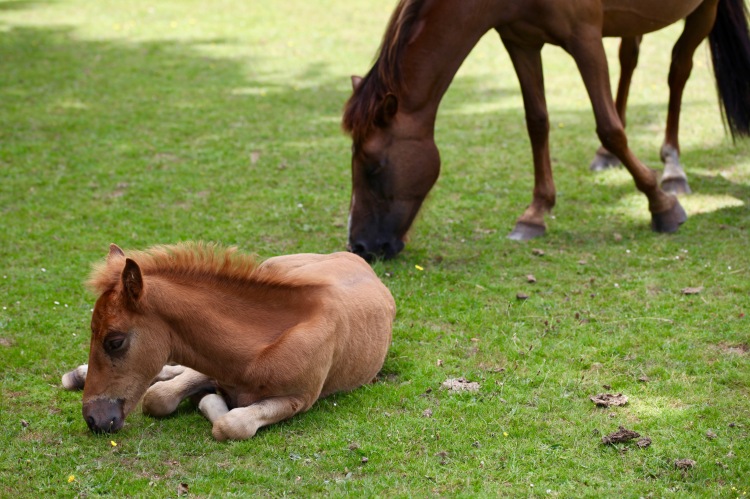 One of the adults came close to nudging the infant of its chosen patch of sward. 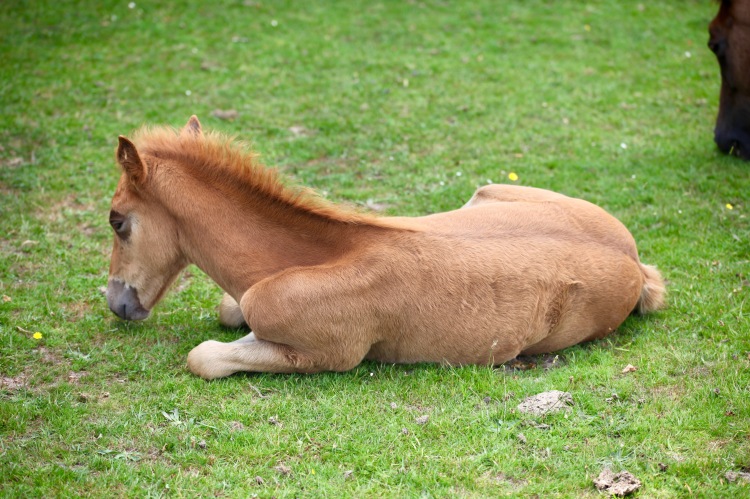 As it snoozed, the little one rested its heavy muzzle on the firm ground.

Eventually even that became too much and the creature collapsed, prone and sprawling. You very rarely see the older animals lying down, for they all sleep standing up. Not so the youngsters whose joints have not yet stiffened. 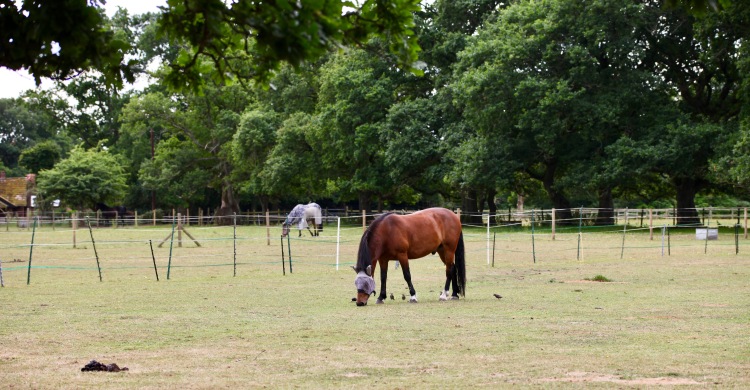 As we neared the village of Hale, domesticated horses in a field along Tethering Lane  wore the fly masks and ear muffs I have mentioned before. These lucky animals are thus offered protection from pestilential flies. As so often, crows peck around what the horses leave behind. 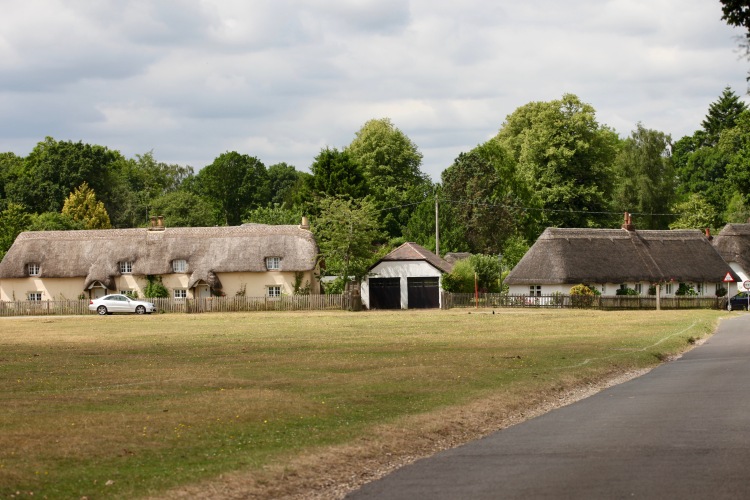 The small village of Hale has a public green surrounded by thatched houses and a school, some pupils of which were engaged in hearty sports as we arrived. I thought it politic not to photograph the proceedings. 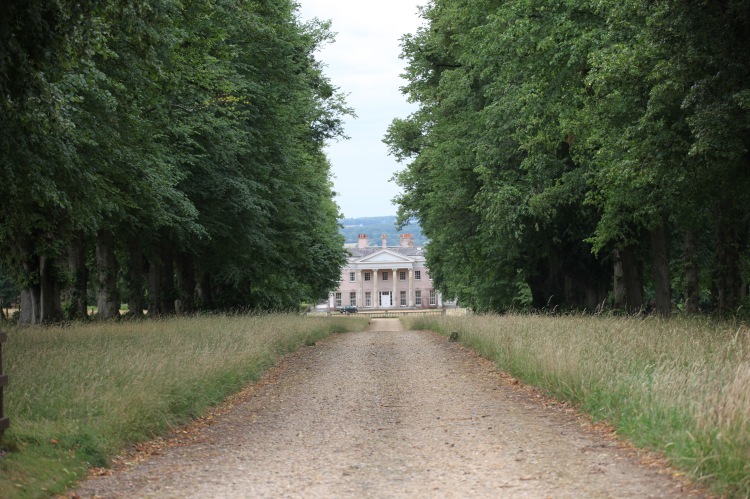 The road through the village also divides the grounds of Hale Park. On one side we see the drive to Hale House;

on the other an avenue of trees extending into the distance. The approach is splendid enough now, but what an impressive coach drive would have been enjoyed in its eighteenth century heyday. There is no public access, so we rely on Wikipedia for the following information:

Hale House was built by Thomas Archer, Groom Porter to Queen Anne, and Baroque architect, who bought the manor of Halesometime after 1712.[1] He demolished an Elizbethan mansion which had been designed by John Webb for the Penruddock family.[2][3] The house was designed and built by Archer around 1715.[3] It was remodelled around 1792 by the architect Henry Holland.[3] Other alterations were made in the early and late 19th century.[4]

It is now a Grade I listed building.[4] The house is in private ownership and is not open to the public.

The park includes a circular pool surrounded by yew hedging and topiary shapes.[6] There is a Ha ha towards the south.[6] The park contains a number of copses, and lodges including the South Lodge which has a Doric portico.[6] Tree avenues cross the park, including a lime avenue which runs north east to Hatchett Lodge, and extends beyond park.[6] The Mount is possibly from the 17th-century house and is enclosed by hedging.[6]

At one time there was an ice house in the park.’ 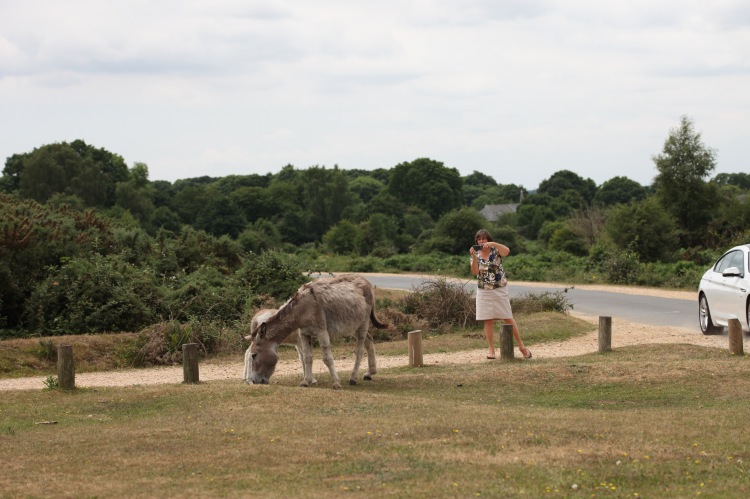 Further on, outside Woodgreen, as I emerged from the car to home in on another equine mother and child, I noticed that another photographer had the same idea. 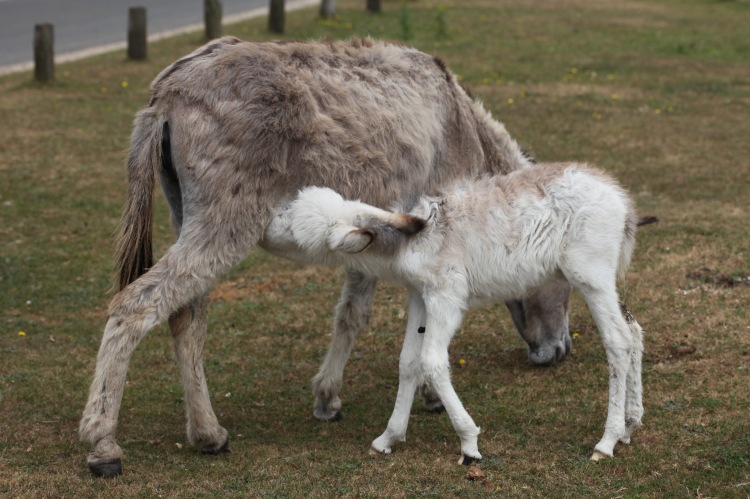 Possibly slightly alarmed by the attention the baby sought a top up from a comforting nipple,

after which it tottered away,

twitching its tail and tossing its head this way and that in an attempt to repel flies.

Then, like its pony cousin, it sunk to the ground, 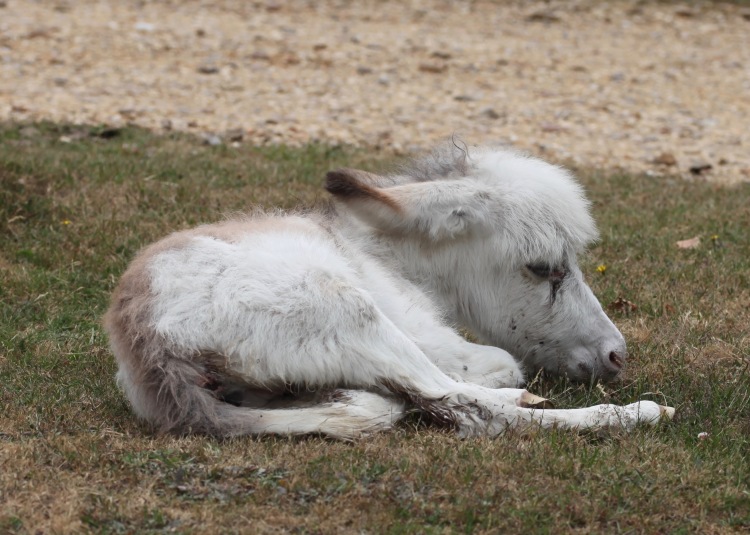 stilled its tail, supported its head, and settled down to sleep.

After our substantial lunches, fish fingers and baked beans sufficed for dinner this evening. Jackie drank Hoegaarden and I drank more of the Fleurie.

55 thoughts on “Joints Not Yet Stiffened”