CLICK ON IMAGES TO ENLARGE. REPEAT FOR FURTHER INCREASE IN SIZE.

Paul Clarke will tell you that my Streets of London series appears on a rainy day. It has surprised us all that today is one such. The garden, after such a long heatwave, has enjoyed the heavy rain we have received, but not the 50 m.p.h. winds.

Here is the view from the kitchen window this morning. Pauline’s light catcher did its job with what little there was.

Now to the Streets of London. Normally I scan the slides a dozen at a time. There are only eleven today because I thought I had lost those from after these of July 2005. Happily, afterwards, I remembered where the rest would be. They were among quite a number I had not yet put into storage files when Jackie came back into my life 10 years ago. The ex-librarian labelled their small processor’s boxes and I put them in a safe place. And we all know what happens to items that are put in a safe place.

My friends who lived in Islington’s Mountfort Crescent, told me that the shaded area at the pivotal point on this private drive concealed a medieval plague pit. 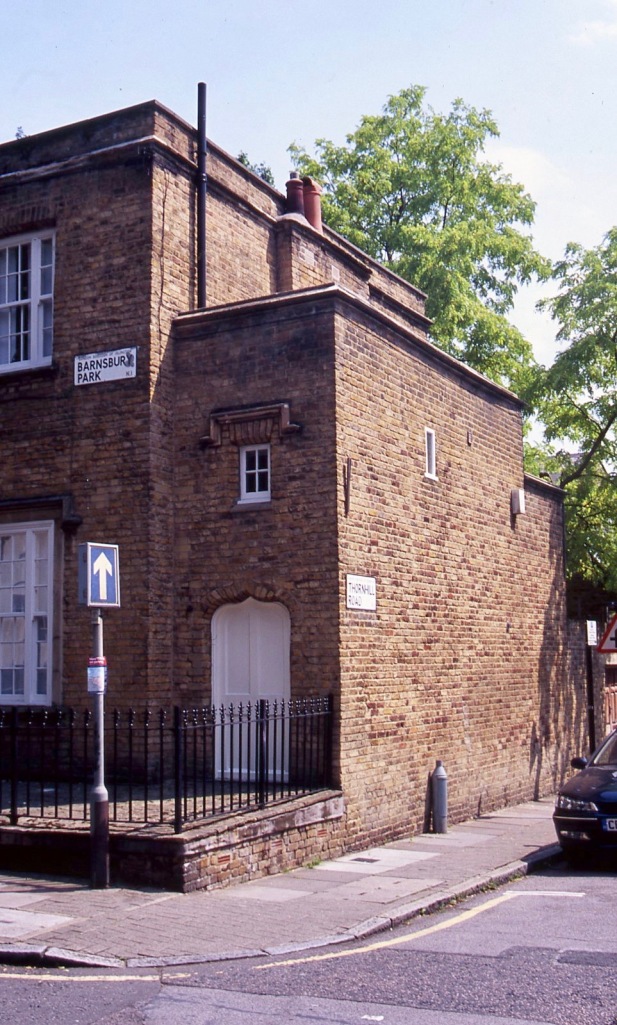 Barnsbury Park N1 contains a number of interesting architectural features, like the entrance porch in the first picture and the elegant doorway on the corner with Thornhill Road. You’d need upwards of £3,000,000 to buy a complete house  in this area. 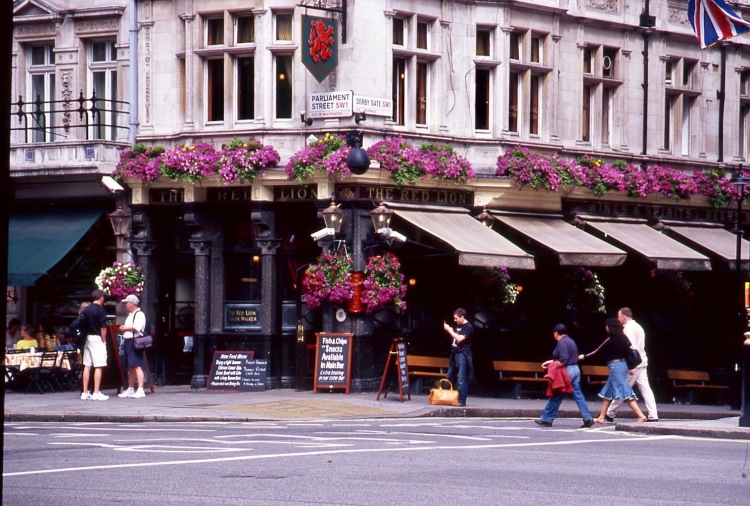 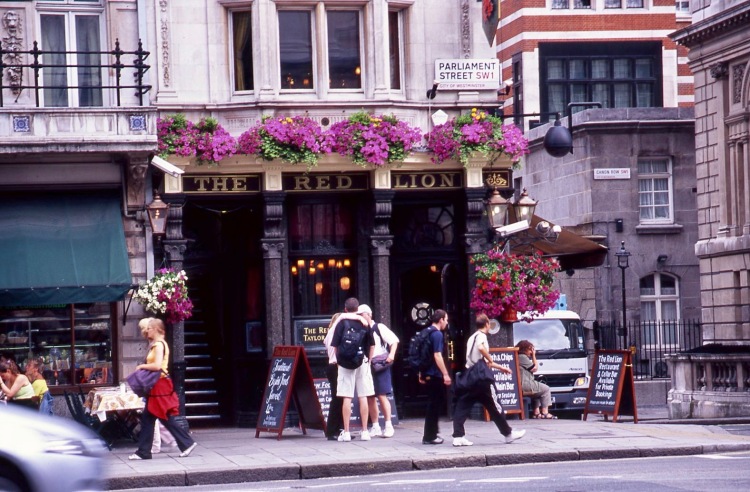 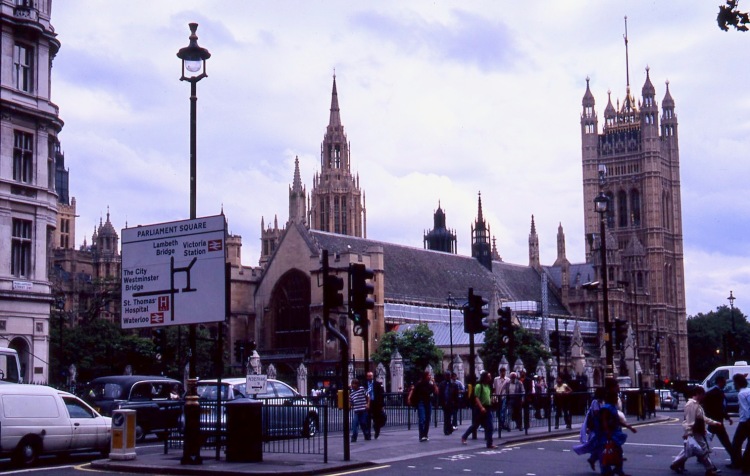 The Red Lion’s own website gives the following information: ‘The Red Lion stands on the site of a medieval tavern – known in 1434 as the Hopping Hall. The tavern passed through various hands and traded under many names in its early years, before it was bought by the Crown in 1531.

Centuries later, with the inn trading as The Red Lion, a young Charles Dickens became a regular visitor. Dickens’ noted that the pub’s landlady was a kind-hearted soul, whose attitude towards him was ‘admiring as well as compassionate’.

Standing so close to Downing Street and the Houses of Parliament, The Red Lion also became a popular haunt for British Prime Ministers. Indeed, the pub served every British Prime Minister up until Edward Heath in the 1970s – welcoming the likes of Sir Winston Churchill and Clement Atlee for a drink.

Situated between 10 Downing Street and the Houses of Parliament, the Red Lion is probably the best pub in the city for lovers of political history. There’s every chance you’ll catch a glimpse of some of our Government’s elite in the bar, too.’

‘This pub was established in around 1749 and rebuilt in 1899. ** It stands on the east side of Parliament Street, at the junction with Derby Gate (formerly Derby Street). The original pub is the one where 12-year old Charles Dickens asked for “a glass of your very best ale” – an incident immortalised in “David Copperfield”. The pulling-down of the old pub was widely regretted in the press, because of the Dickensian associations, and a bust of the author was placed above the second-floor bay window in the new building.’ (https://pubshistory.com/LondonPubs/WestminsterStMargaret/RedLion.shtml) 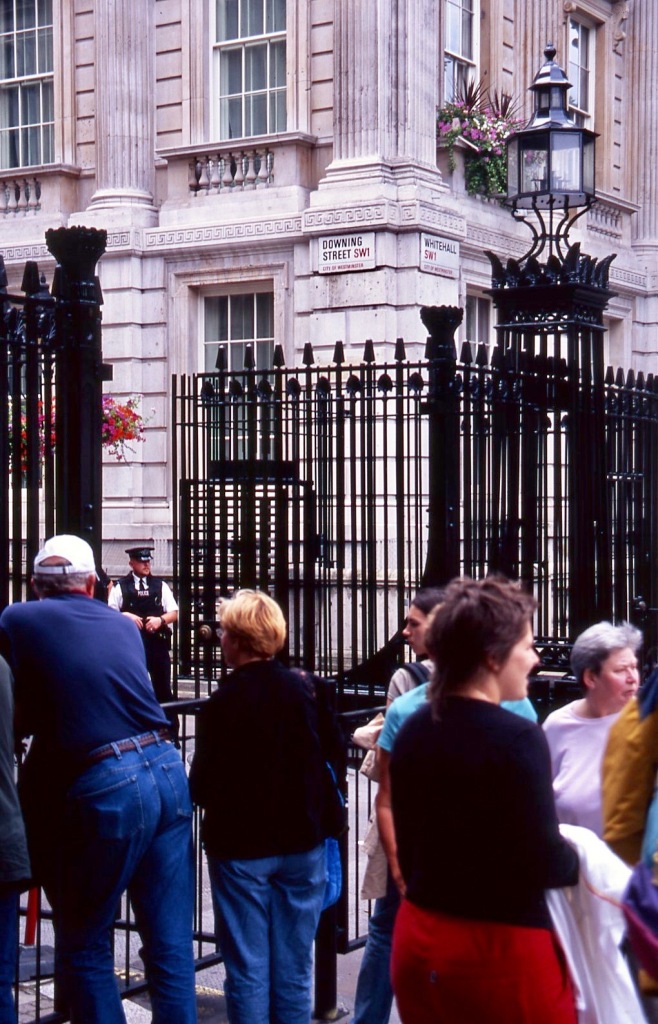 Downing Street needs no introduction from me. Our Prime Minister resides at No 10, while the Chancellor of the Exchequer occupies No 11, next door. 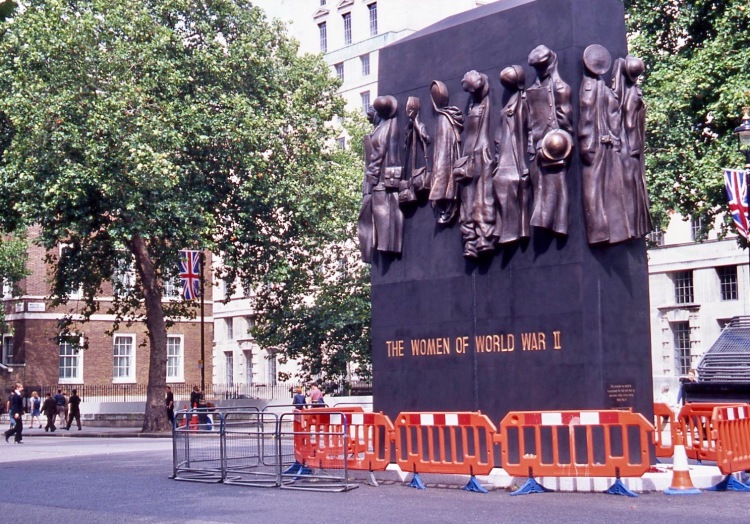 Further along Whitehall ‘The Monument to the Women of World War II is a British national war memorial situated on Whitehall in London, to the north of the Cenotaph. It was sculpted by John W. Mills, unveiled by Queen Elizabeth II and dedicated by Baroness Boothroyd in July 2005.’  There is much more information about the creation of this memorial on https://en.wikipedia.org/wiki/Monument_to_the_Women_of_World_War_II 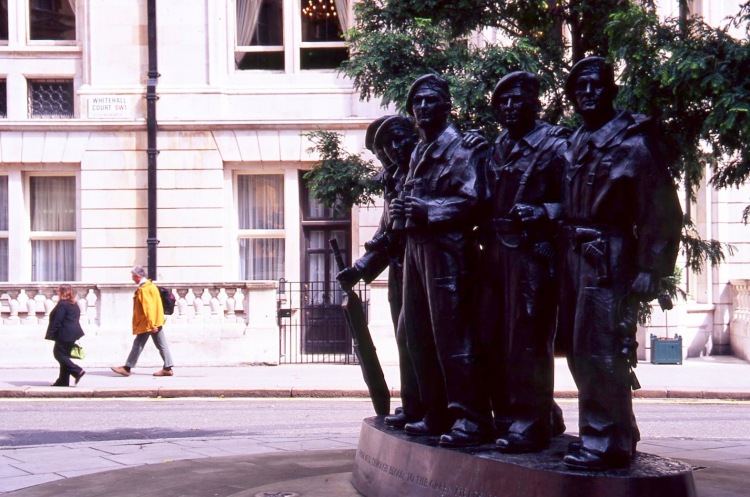 Around the corner in Whitehall Court we find the Royal Tank Regiment’s memorial bearing on the base their motto ‘From Mud, Through Blood, To The Green Fields Beyond’.

I am indebted to the post of Sura Ark on Flickr for the following information: ‘The Royal Tank Regiment Memorial Statue was unveiled by their Colonel In Chief, the Queen herself, on 13 June 2000. Created by sculptor George Henry Paulin it features the five crew members of a Comet tank, the model introduced towards the end of World War II and which saw service right through until 1958. The Regiment itself was formed in 1917 – this fact is acknowledged in a small plaque that sits at the base of the statue depicting the Mark V tank which was used on the battlefields of Flers, the Somme. Amiens and elsewhere.’