CLICK ON A SINGLE IMAGE TO ENLARGE. CLICKING ON THOSE IN GROUPS ACCESS  GALLERIES, INDIVIDUAL MEMBERS OF WHICH CAN BE VIEWED FULL SIZE BY SCROLLING DOWN AND CHECKING BOX AT BOTTOM RIGHT.

Once hailed as ‘one of Hampshire’s loveliest gardens’ we last visited Apple Court Garden, under its previous ownership in the spring of 2014. Elizabeth had also viewed it before then. Today it was open under the NGS (National Gardens Scheme) which raises money for charity. The three of us went along to be profoundly disappointed. Certainly we have endured a very dry summer, but that was no reason for the general air of decay and lack of care, especially as the entrance fee and prices of rather sad plants for sale were high.

My camera worked hard to find things of beauty to photograph. 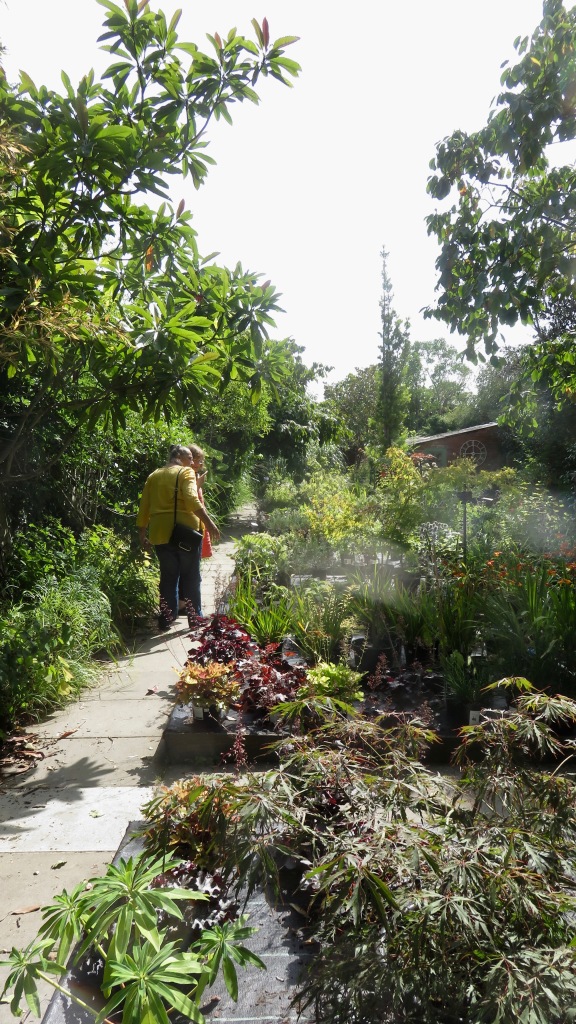 Jackie and Elizabeth studied the plants for sale, on the way to the entrance hut. 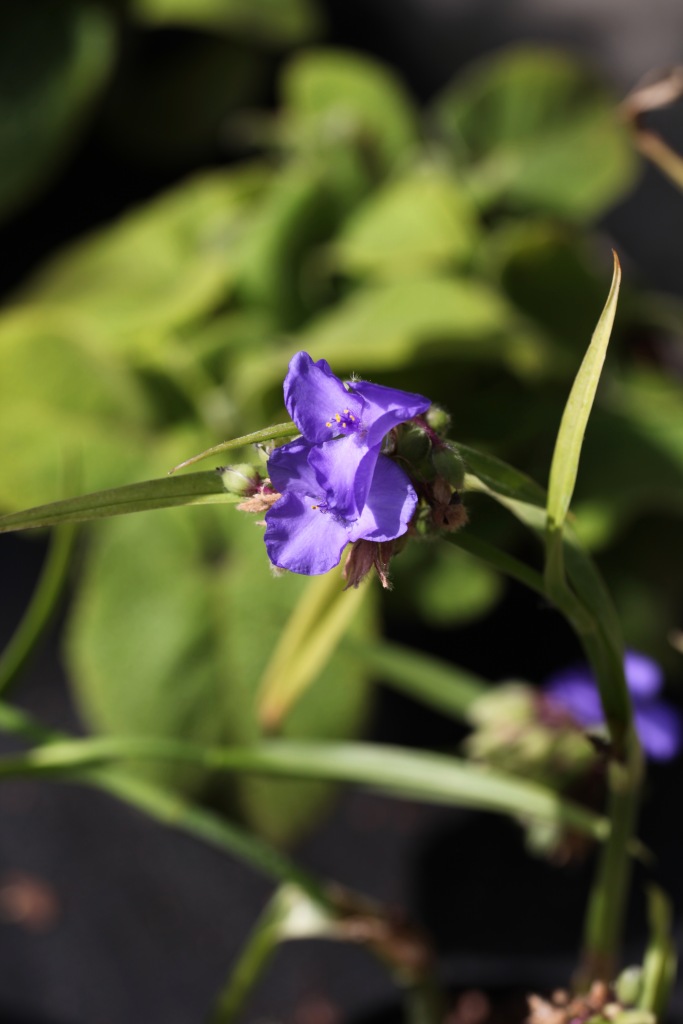 Such colour as there was on this stretch – or anywhere else for that matter, appeared in  scattered spots, like this spiderwort tradescantia, 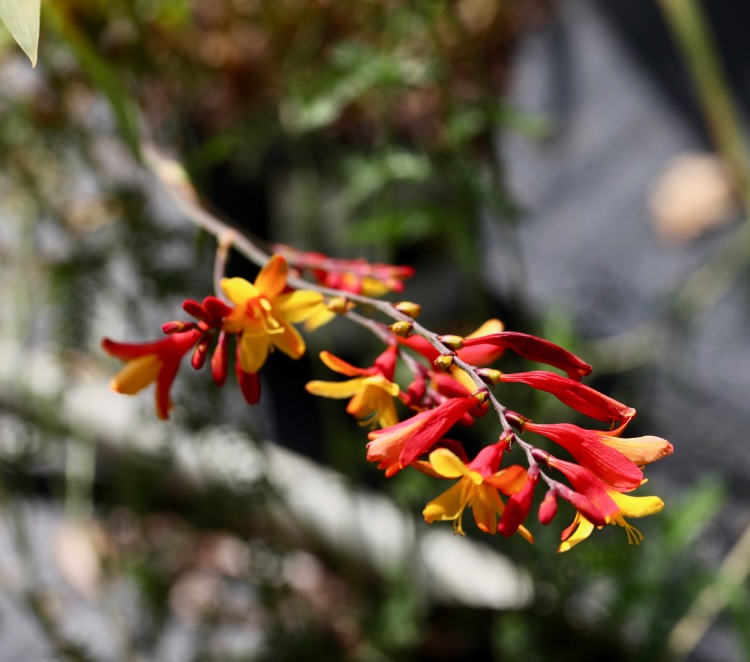 or this attractive two-tone crocosmia. 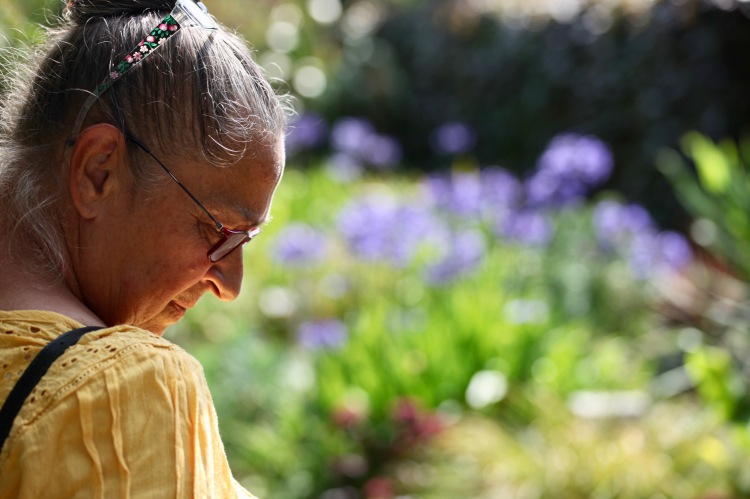 Elizabeth having paid our £5 a head entrance fee we scoured the beds for interest. Here Jackie contemplates the parched earth. 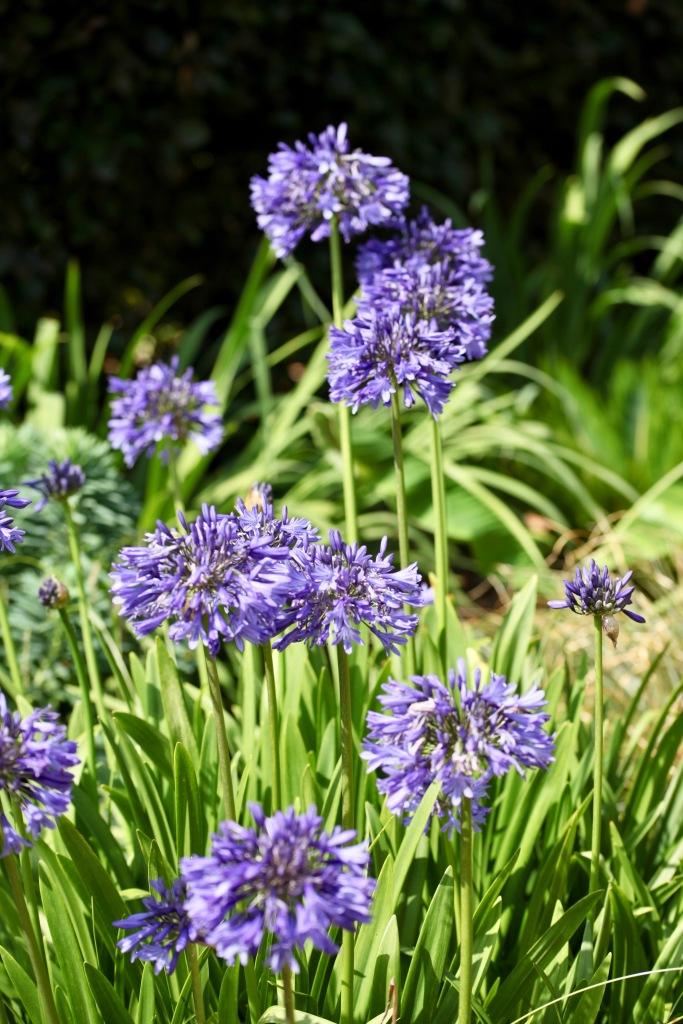 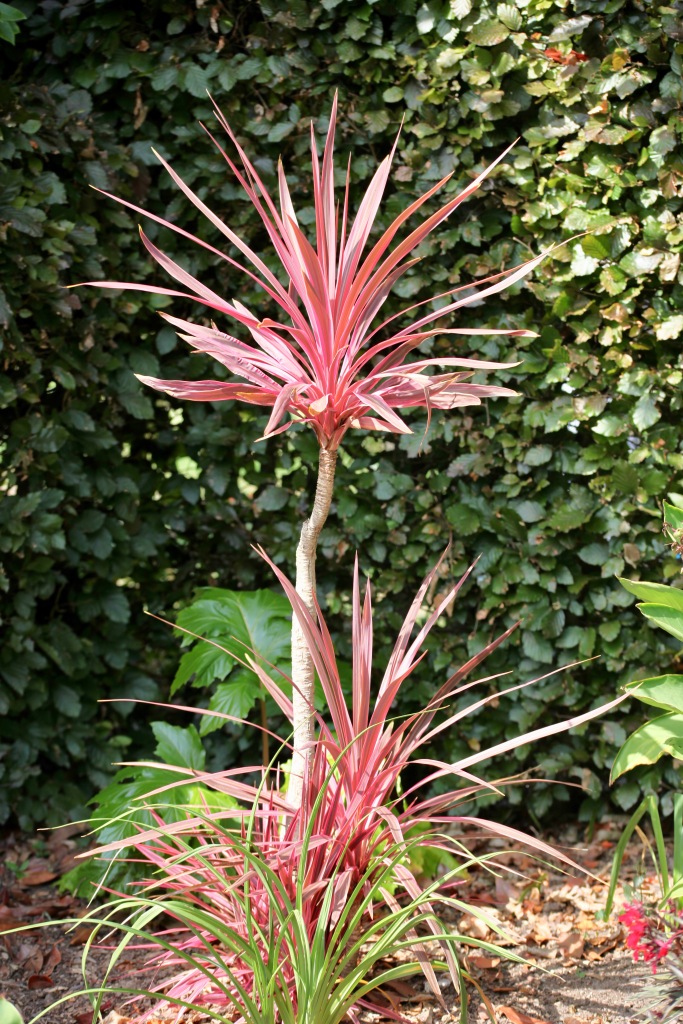 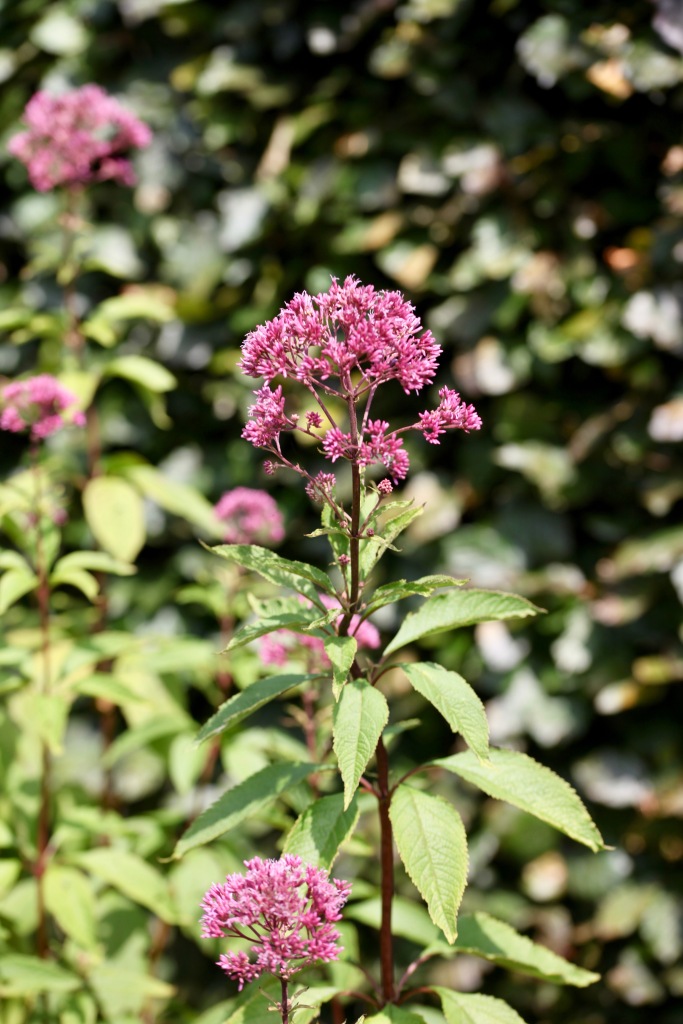 Joe Pye Weed is attractive to bees. We noticed none in the garden. 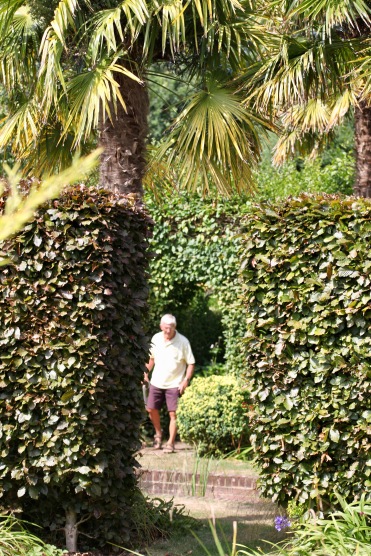 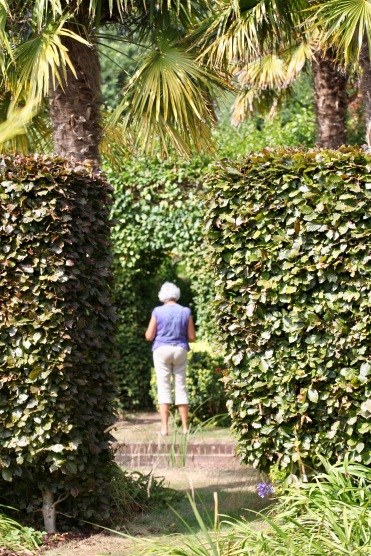 A modicum of interest was engendered by the emergence of other visitors in the gaps between the beech hedges. 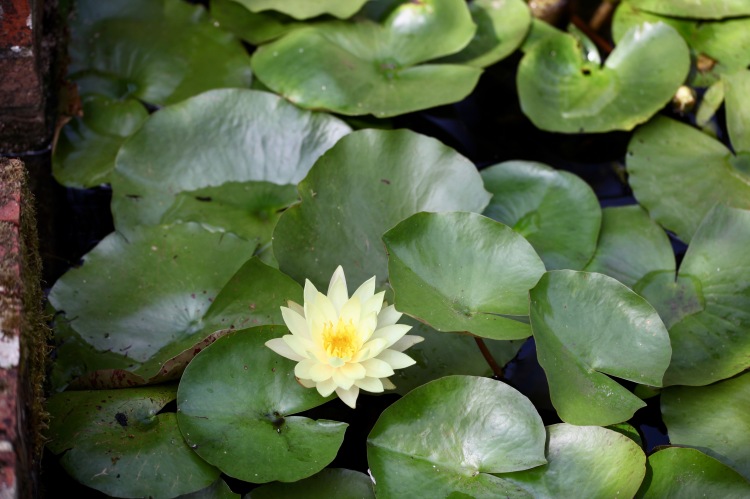 At least, we imagined, the water lilies 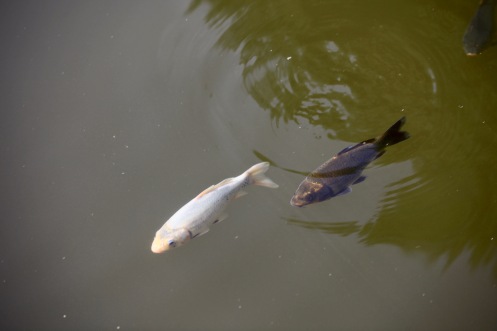 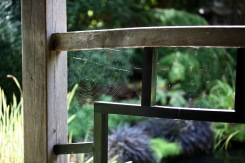 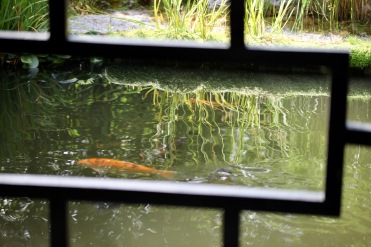 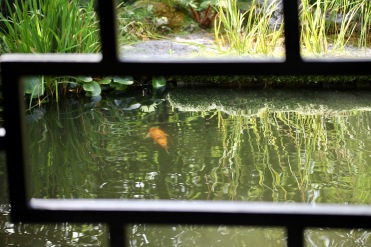 and the carp in the Japanese garden would sparkle. Sadly the once clear water was too murky for the lens to penetrate to any depth; spiders’ webs festooned the wooden screen; 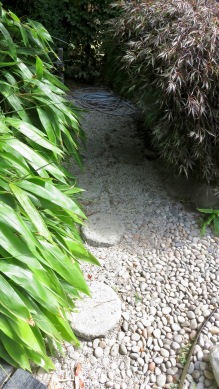 the surrounding path had become overgrown and the gravel so sparse as to offer raised circular stones as booby traps.

Comparisons are odious – so the old saying goes. Well, in our view this is no longer a lovely garden. A glance at the last two images in the post highlighted in the first paragraph above will show the difference in the carp’s pool. Our own garden, containing far more colour per square metre, is about a quarter of a mile from Apple Court. I am unashamed in making these two comparisons.

This evening Jackie produced, for the three of us, succulent roast lamb; perfectly crisp roast potatoes; Yorkshire pudding; runner beans from the garden with crunchy carrots and soft mange touts; and onion gravy so thick as to require a spoon for serving. Jackie having drunk her Hoegaarden on the patio beforehand, abstained from alcohol, while Elizabeth and I drank Castillero del Diablo reserva Merlot 2017.