Yesterday, Jackie made an unfortunate discovery in the Weeping Birch Bed. Roughly half this plot has been raised on top of the concreted area that we think must have been laid for Post Office vans in the past. It was therefore only a few inches deep. This also explains why water escapes from the un-cemented brick retaining wall. This meant that the border of the back drive had to be further plundered to lift the level. The Head Gardener began the task yesterday and I finished it this morning. The toad that I disturbed hopped away at the speed of an Olympic athlete. The warm weather must have kept it awake.

This afternoon I supported Jackie in replenishing this bed. She made a support for the honeysuckle, plonked a fuchsia, and planted various smaller plants, such as yellow chrysanthemums. I helped spread the new topsoil, dead-headed some roses, and divided the libertia. 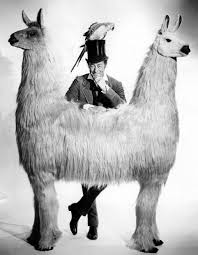 This latter task required the application of two forks in  emulation of Dr Dolittle’s Pushmi – pullyu; the insertion of a fairly useless sharp knife; and strenuous manual prising and tugging.

For those unfamiliar with this creature, Wikipedia informs us  that ‘the pushmi-pullyu (pronounced “push-me—pull-you”) is a “gazelle-unicorn cross” which has two heads (one of each) at opposite ends of its body. In The Story of Doctor Dolittle, the grateful monkeys in Africa persuade it to accompany Dr. Dolittle to England to earn money for him (in Doctor Dolittle’s Circus and Doctor Dolittle’s Caravan.) The pushmi-pullyu usually only uses one of its heads to talk, reserving the other for eating (thus allowing it to eat while speaking without being rude) and claims that its great-grandfather was the last unicorn.

In the 1967 film, the pushmi-pullyu was instead portrayed as a double-headed llama. The doctor can immediately speak to the pushmi-pullyu, knowing that llamas speak a dialect of camel language.’

I did my best to persuade the garden’s insect life that we are now into October, but they just carried on regardless. Perhaps the talking llama could have interpreted for me.

This evening I burnt much of the recent clippings in the incinerator. 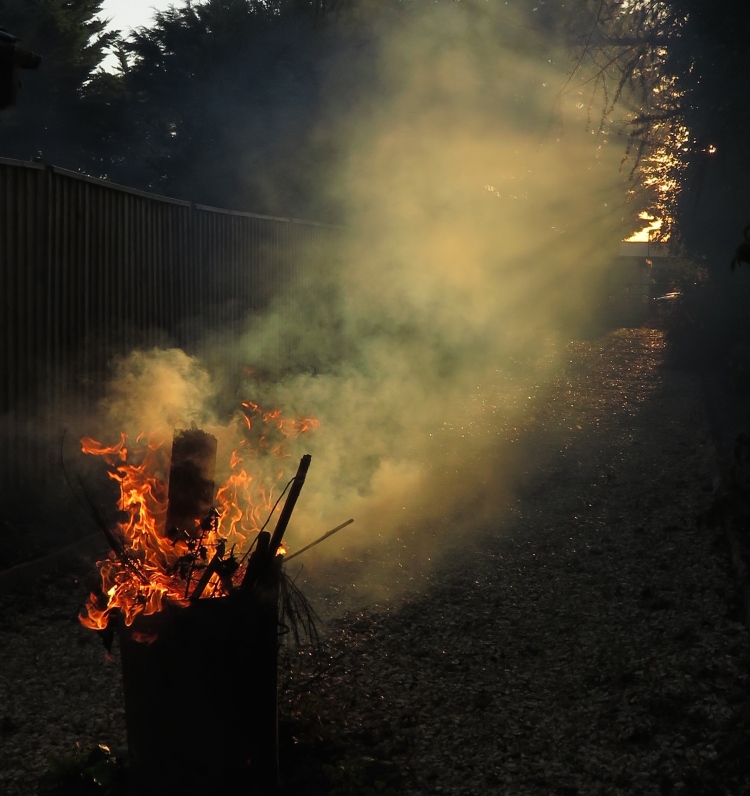 The rays of the setting sun frolicked with the smoke from the fire.

As is often so, Jackie made enough sausage casserole yesterday for several meals. I was more than happy to sample it again today, with crisp carrots and cabbage, and creamy mashed potato. We had both enjoyed a beer whilst watching the incinerator, so we abstained from drinking with the meal.

Now I am going to watch a recording which will let me know how Wales got on against Fiji in the Rugby World Cup.