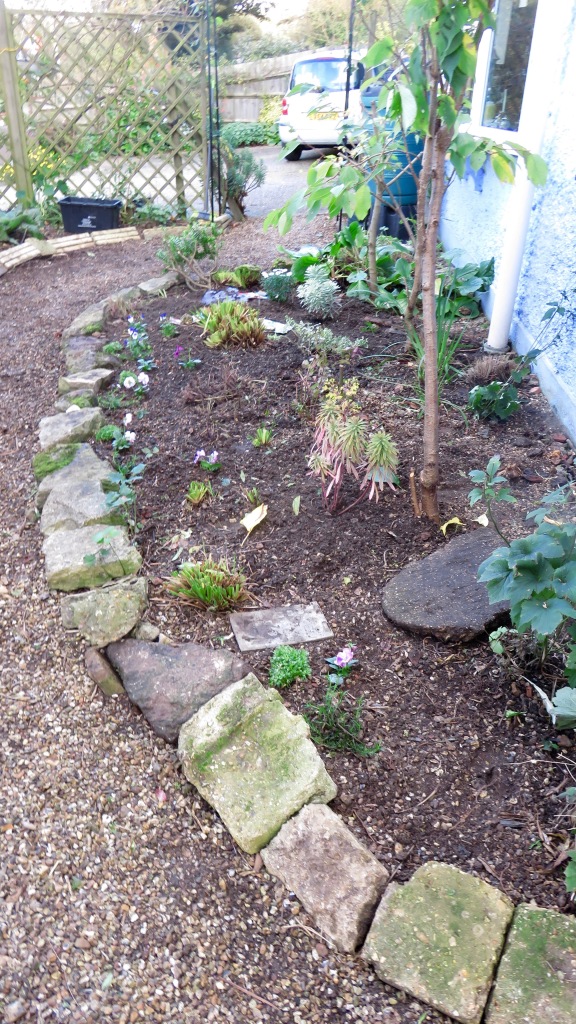 Jackie had, of course, not been idle during my trip to Nottingham. She has almost completed preparing the front garden beds for winter. It fell to me this morning just to extract a few stubborn euphorbia roots and reset some of the edging stones.

The Head Gardener completed the task this afternoon.

Aaron, too, had been busy. He has brought half the griselinia trees down to a reasonable height. By the time he has finished, the burning pile will be even larger.

This leads me to the next section of the garden story.

Disposal of cuttings and sawn limbs is a continuing problem. The first pile, here photographed on 17th June 2014, was just the tip of the iceberg. In my prime I was 6’3″. I don’t know what my height is now, but that should provide an idea of scale. 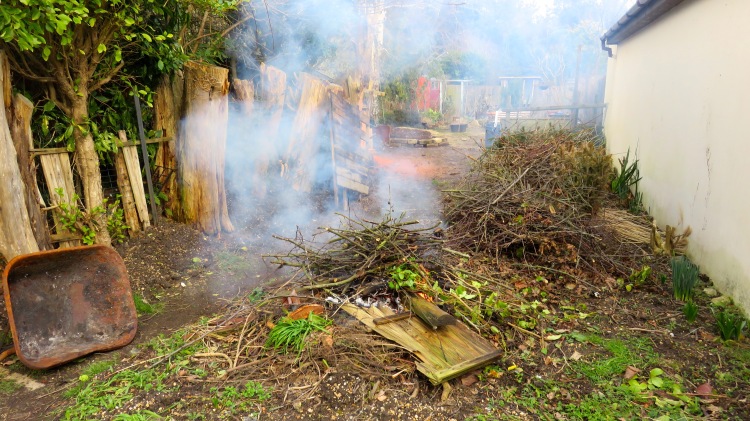 We will probably always need to be lighting fires. The first were contained, after a fashion, in a discarded wheelbarrow, which was, in that sense, recycled from its original purpose. Eventually it collapsed, and was transported to the Efford Recycling Centre. The first of these two photos was taken on 23rd June 2014, and the second on 25th February 2015.

Usable stone, as has already been seen, was dug up and recycled elsewhere in the garden. We would occasionally come across pits of broken tiles and other rubble. This we bagged up and disposed of in the municipal dump. After extracting a good third of a metre’s depth of these tiles, I gave up and piled earth on top. It is not an area where we are ever likely to grow anything.

We would almost qualify for a season ticket to the dump.

When writing of the preparation of the rose garden, I omitted to mention the bath I found buried against the south wall. This was full of earth and invasive plants, and hidden behind a box hedge, the only purpose of which seemed to be to conceal the plumbing. I had to dig into it to discover what it was, then empty it in a confined space, and carry it to the utility end of our plot.

It now sits behind the Head Gardener’s shed, where last winter it was successfully recycled into a cold frame, and will be used again as such this year. The top is a recycled sheet from ‘greenhouse unassembled’.

Soon, we will be off out, the purpose of which will be disclosed tomorrow.

29 thoughts on “Before And After: Disposal And Recycling”