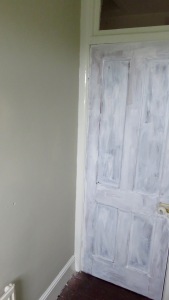 When Aaron, continuing his work on the bathroom, engaged Jackie and me in a debate about whether or not he should paint both sides of the bathroom door, he observed that he loved a difference of opinion. Jackie said he could do what he liked – the other side of the door will be painted anyway when he does its companions on the landing. I pointed out that that left him in the position of having to choose between us, and likened it to Christmas at Mat and Tess’s a few years ago.

I have two Antipodean daughters in law. Tess is from New Zealand, and Holly is an Aussie. They each presented me with a bottle of their native wines, asking which I would like to open first. I was between the rock of Marlborough and the hard place of Margaret River. Aaron suggested I might have taken a nice French one out of the cupboard. Sitting firmly on the fence, I said we would no doubt drink them both, so I would open them together – a somewhat difficult manoeuvre, especially for one who is not exactly a dab hand with a corkscrew.

Yesterday afternoon in New Milton, and today in Lyndhurst, we had far more success with Christmas presents than hitherto.

Lyndhurst, the tourist hub of The New Forest, was very busy. 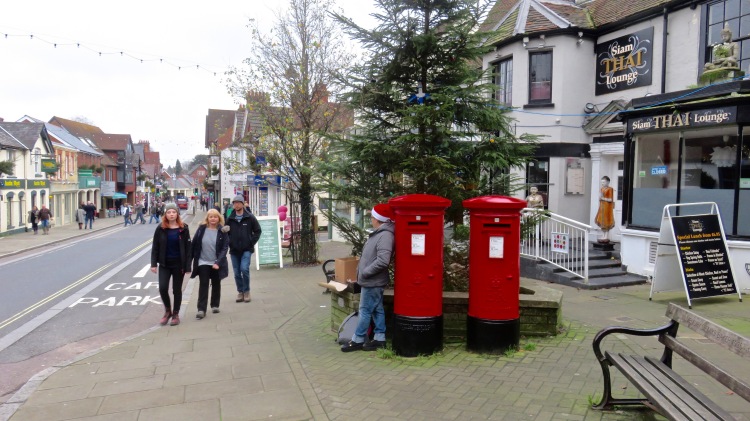 Santa’s Little Helper stood by the twin post boxes, keeping her eye on a cardboard container on the wall surrounding the Christmas tree. I imagine this was for the collection of letters to Father Christmas. (In truth she was selling cup cakes, but let’s not allow the truth to spoil an idiotic idea.)

It is normal for our post boxes to bear a bas-relief of the sovereign’s initials. The one against which our subject is leaning is embellished with GR and the other with EIIR. I don’t know which of the six Georges was on the throne when the first was installed; and since there were no such amenities during the reign of the first Elizabeth, the II on the second is probably a little superfluous.

On our way home, as the sun was thinking about calling it a day, we diverted to Milford on Sea. The concave section of the cliff edge in this shot, is where another section has fallen away. 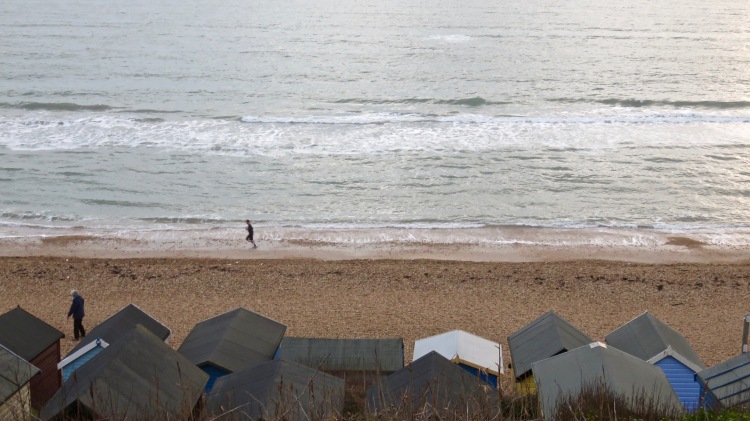 A number of joggers were about. Here one runs along the shoreline.