CLICK ON ANY IMAGE TO ENLARGE. REPEAT IF REQUIRED

Today the sky was pure graphite and rain fell intermittently. This afternoon I bought a now available sheet listing the entries to the Hordle Scarecrow Trail. As we had feared, the numbers were down considerably from previous years, and some had suffered from the recent gales.I featured a few of the exhibits in ‘Seeking Hordle Scarecrow Trail’

Now the extended time limit had passed the sheets had been published today. The staff member in the pet shop who sold me the form told me that her own personal entry, a Frog Prince, had been ruined by the gales, and so would not be on display. She wasn’t sure that she would be able to repair it. In an effort of encouragement, I told her I would be looking out for it after the weekend. She had won the competition in two previous years.

The Little Princess had stood outside 6, Elizabeth Crescent. This decapitated scarecrow was all that was left of it.

The third entry, from Ramblers, Woodcock Lane, was missing. This was Eric who was meant to gaze lovingly at Ariel, his sweetheart, at Rose Cottage, next door. 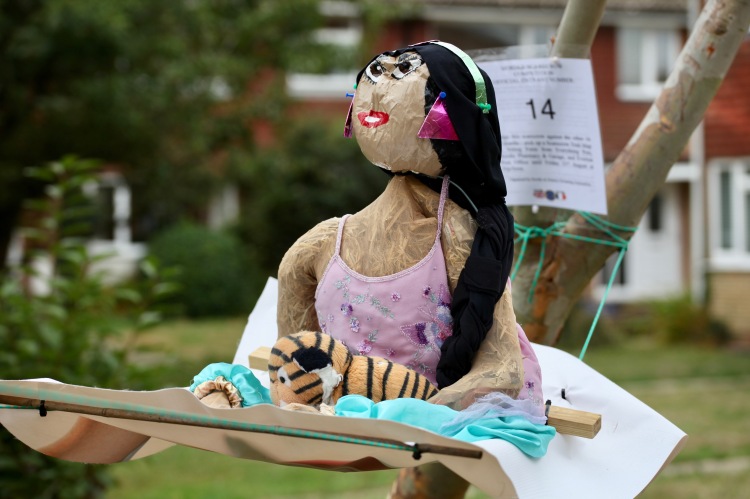 I needed to remove and replace a large protective plastic bag from Princess Jasmine at 20 Larch Close. We’ll have a look next week for the two absentees.

50 thoughts on “Picking Up The Trail”