Knowing we were in for heavy rain this afternoon, Jackie ventured out on this drizzly morning to tackle the storm damage. The idea was that she would free what she could from the entanglements of the fallen tree, then call me to lift it. She seemed to be taking quite a long time, so I wandered out to join her. 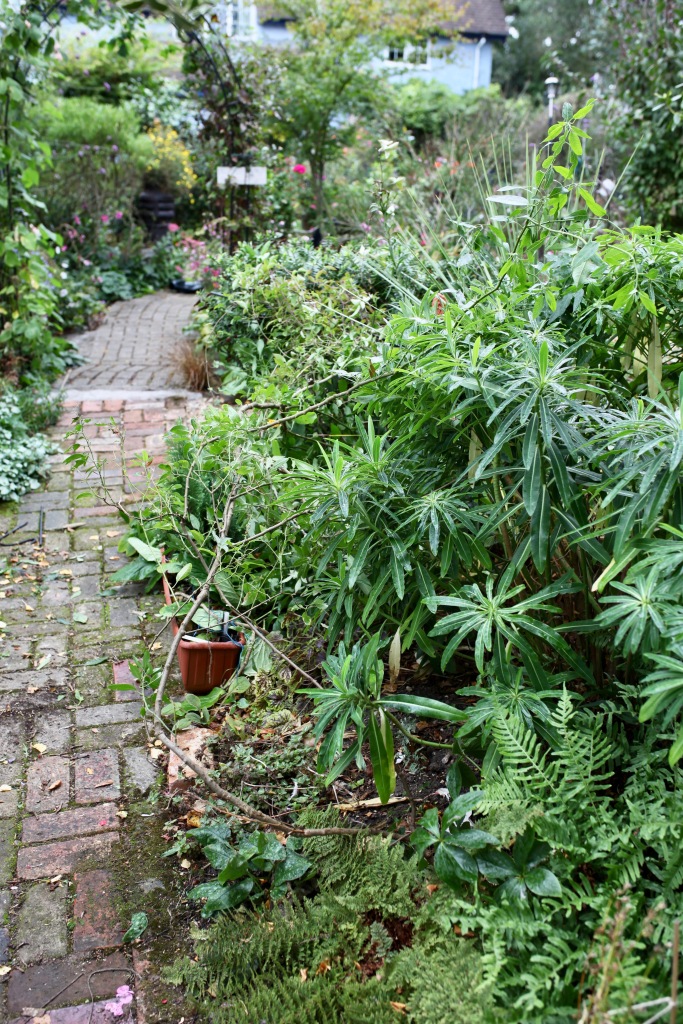 She had freed the baskets from beneath the tree which she had hoisted out of the West Bed, and unravelled the still rooted solanum from the trunk

which she had dragged onto the back drive path.

The wicker owl, sans nose, perched on a low stump,

and the hanging baskets found a temporary home on a brick pillar in the recently thinned out Weeping Birch Bed.

The fallen hydrangea terra cotta pot had been righted. 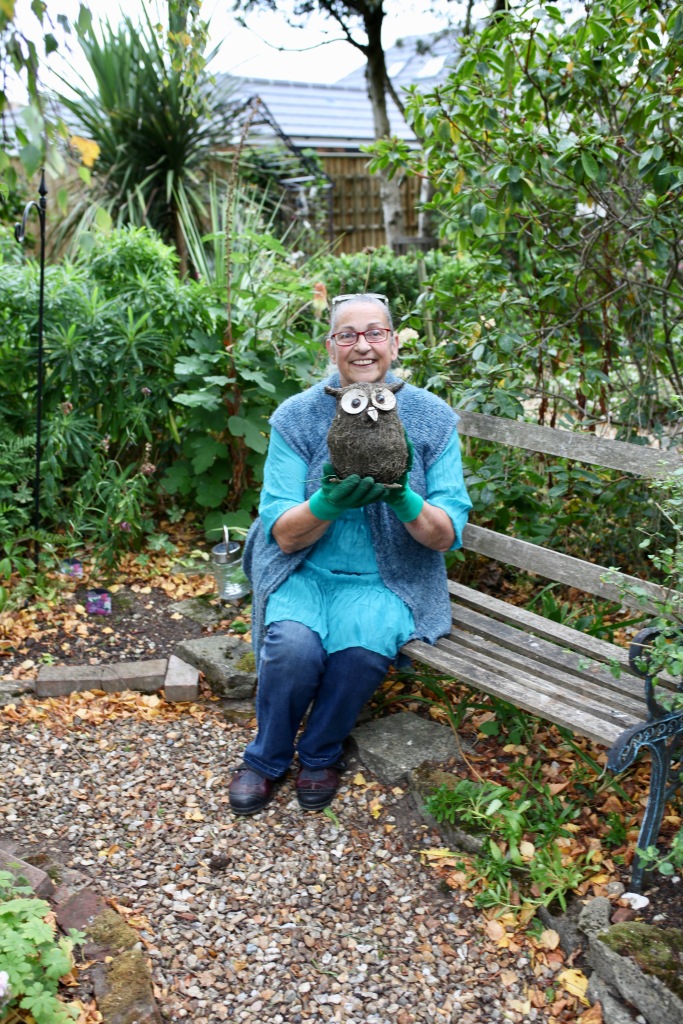 While I surveyed the Head Gardener’s efforts, she furnished the owl with a new beak. 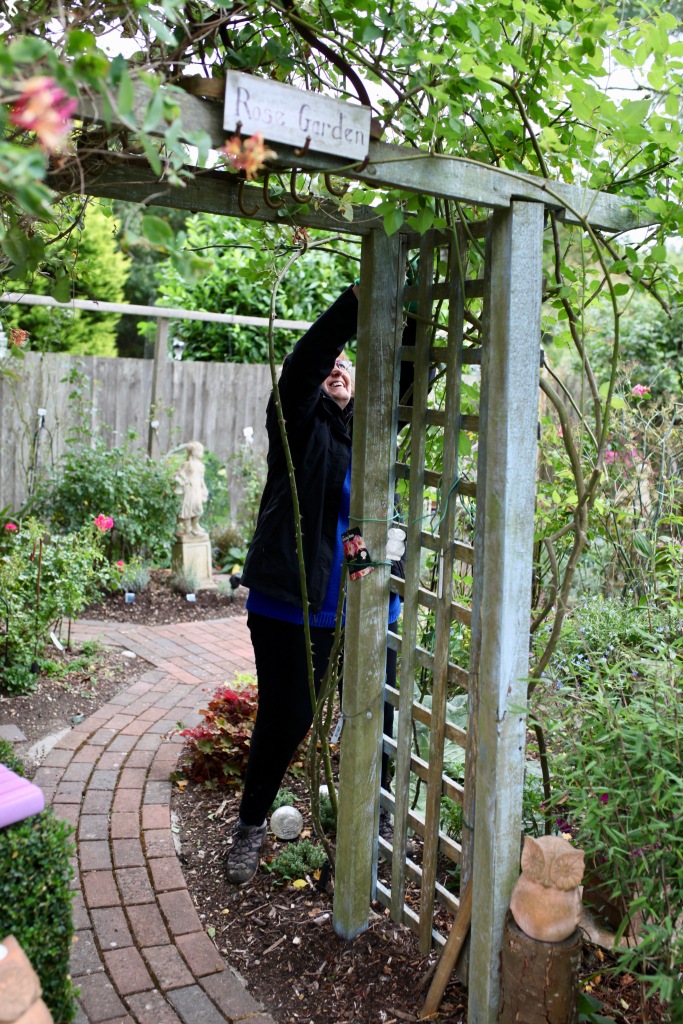 Elizabeth soon came out to lend a hand, which was used to retie the rose Summer Wine.

Jackie had gathered up many fallen branches to add to the few I plucked yesterday. My sister continued until lunchtime when she dripped indoors having cleared the rest.

As the rain hammered down this afternoon, I took a virtual reality tour of the Streets of London, scanning a baker’s dozen of images from colour slides of May 2008. 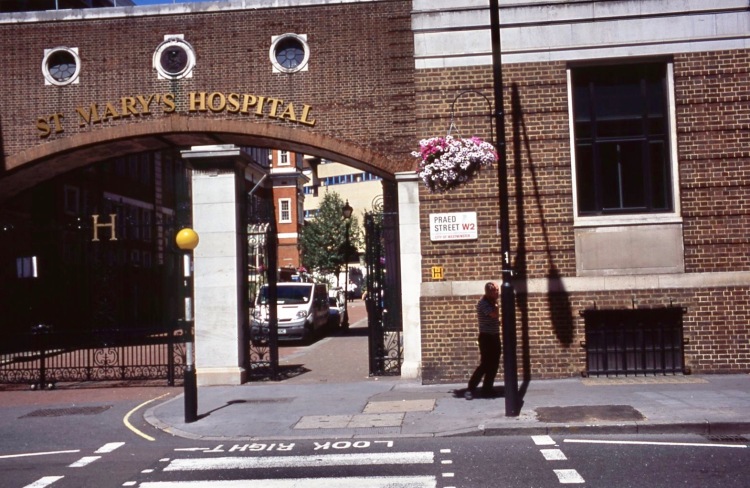 St Mary’s Hospital in Praed Street, W2 is where, a little over a year later, I would be given a replacement left hip.

Was this a group of student medics? If so, were any of them in attendance at my surgery?

Architectural reflections may be viewed in Bayswater’s Cleveland Terrace W2 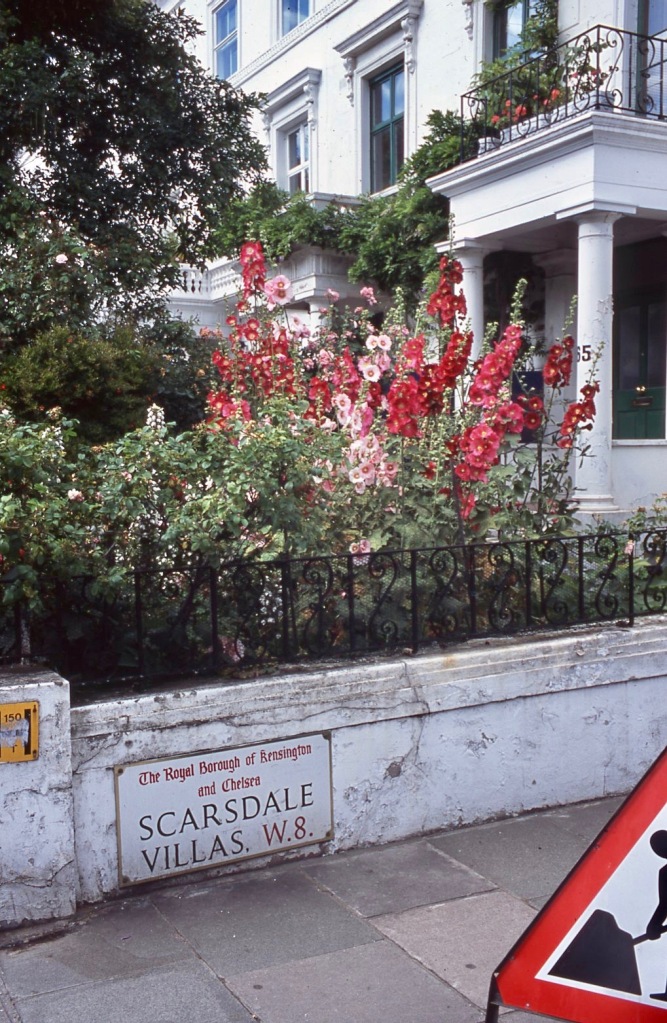 The hollyhocks in this garden on the corner of Scarsdale Villas and Earls Court Road W8 suggest that this slide is an interloper and must have been taken a month or two later. I wasn’t cataloguing quite so carefully during this period of one of life’s hiccups. The road mending sign blends nicely with the vibrant blooms. 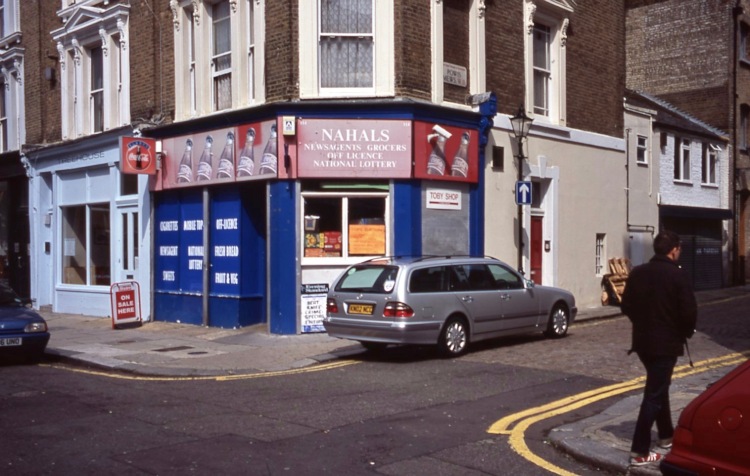 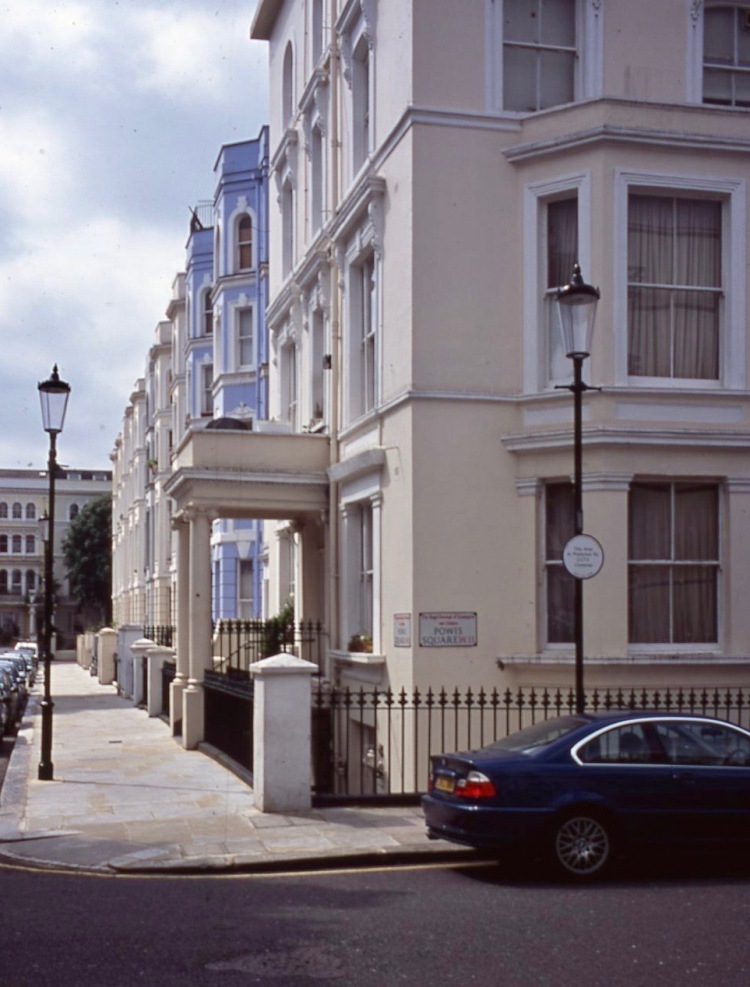 Powis Square is not far away; 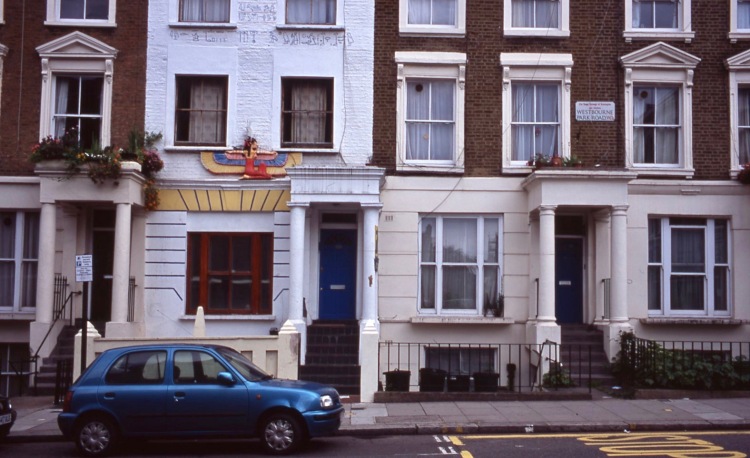 nor is Westbourne Park Road W11. I wonder whether this fascinating kneeler still stands on the first floor ledge we see. 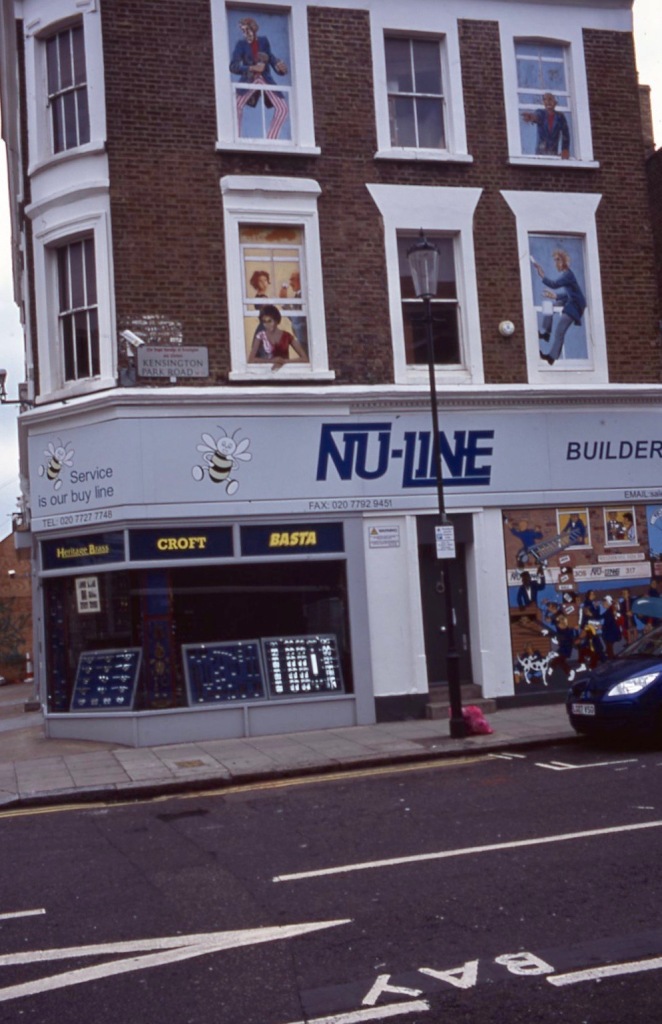 Nu-Line Builders’ Merchants have produced very professional tromp l’oeil users of their products to mask their windows on the corner of Kensington Park Road W11. 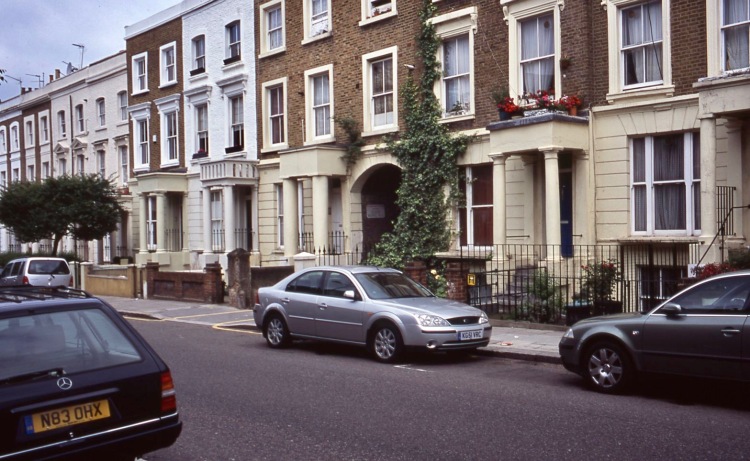 off which we find Bassett Road W10, where there seems to be pruning of plane trees under way;

and St Charles Square W10, on the corner of which someone appears to be in trouble.

Sadly, Samuel Becket had recently been defaced in Blenheim Crescent W11 at its junction with Portobello Road. This 2006 work by Alex Martinez was based on a photograph produced by Jane Bown in 1976. It has now been painted over.

Jackie normally labels pre-cooked meals that she stores in the freezer. When she produced tonight’s protein item she had been distracted from doing so. The crunchy carrots and cauliflower; tender spring greens; rich red cabbage were served with fish, not cottage pie. The meal was, nevertheless, most enjoyable. The Culinary Queen had prepared her splendid beef gravy, but refused to give it to us. She drank Hoegaarden while Elizabeth and I drank Casillero del Diablo Reserva 2016.