This morning we took a trip back to Gordleton Barn to measure a door I had photographed on our last trip in the hope that it might be suitable to replace our inner front door I don’t like. It was too thick.

The amount of rain that has fallen in the last 48 hours let up only briefly this morning, but we went for a forest drive anyway. 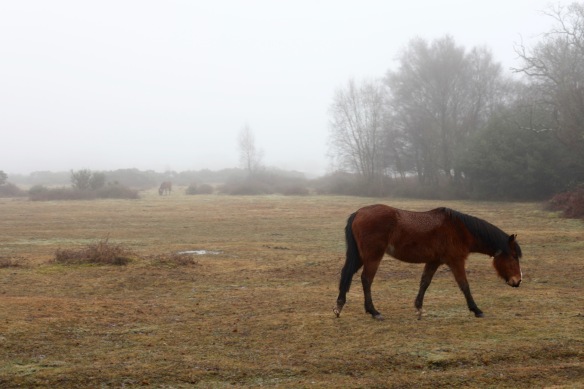 Damp ponies, such as these at Wootton, continued to feed on the misty moors, 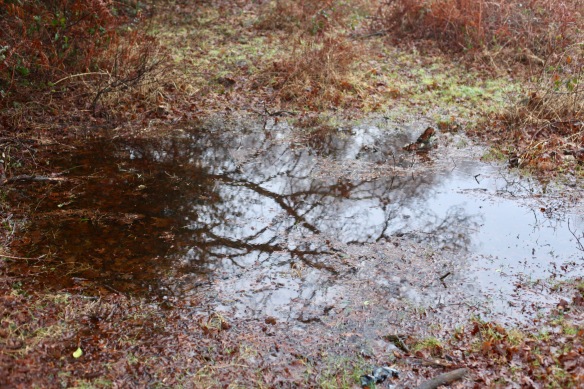 Whilst I was engrossed in photographing the soggy terrain, 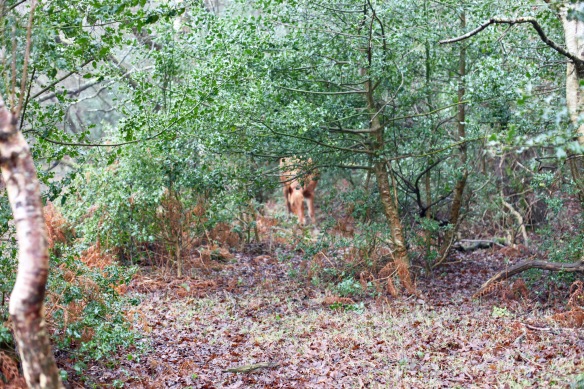 I glimpsed something among the trees that looked a different brown than the bracken. 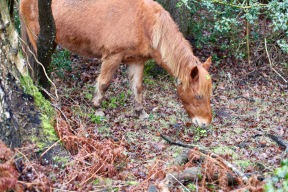 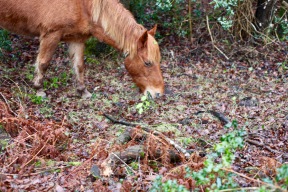 It turned out to be a pony brunching on holly. 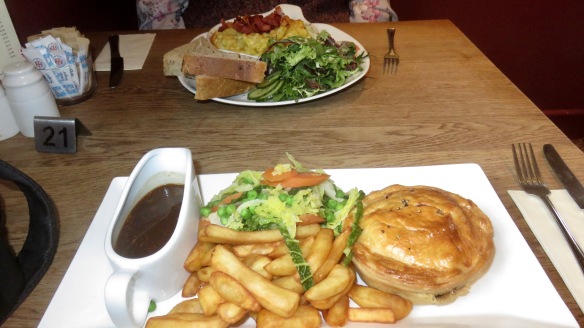 This gave us the idea of lunching at Holmsley Old Station Tea Rooms. My choice was steak and ale pie, chips, Savoy cabbage, carrots and peas. Just look at that gravy; and the wedges supplied with Jackie’s macaroni cheese, bacon, and salad. 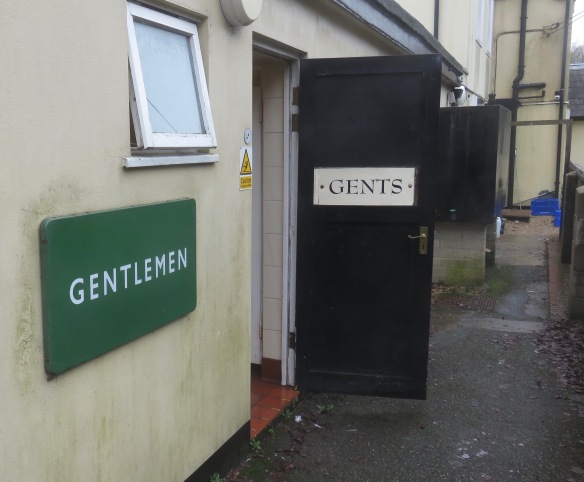 I visited the gents which was, of course, situated at the end of the platform. 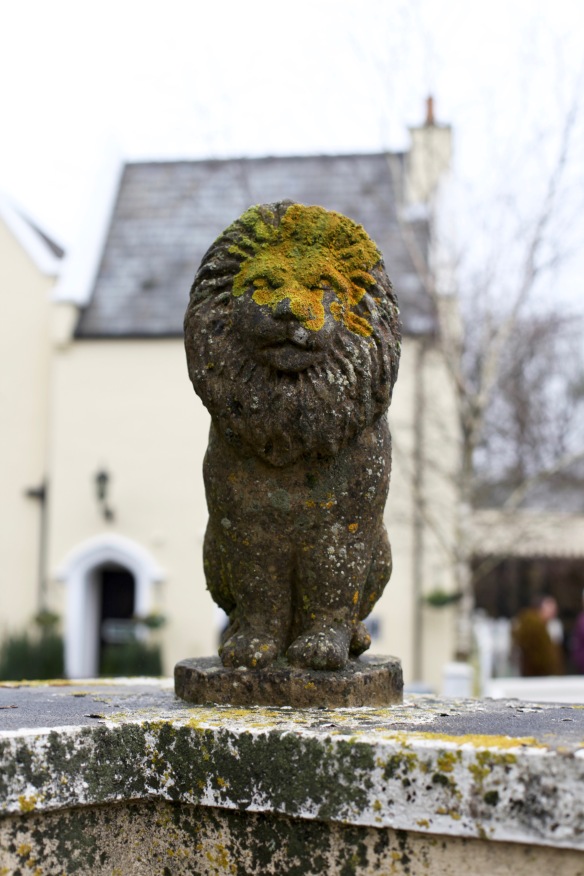 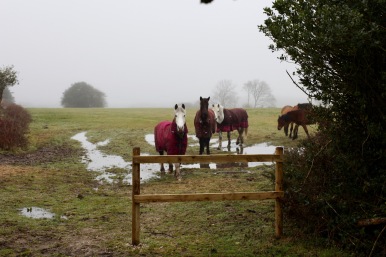 It was in Braggers Lane at Thorney Hill that I became rather mean to a string of be-rugged horses. Stopping to photograph pools leading to a five-barred gate, I noticed these animals far away beside distance trees. Seeing me lean on the gate they scrambled over to me, no doubt expecting to be fed. 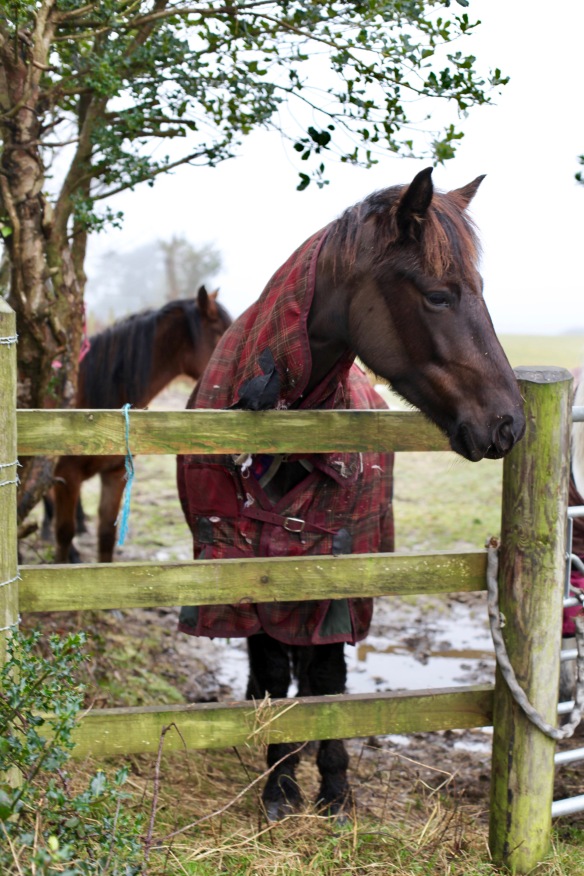 There was no such luck, and they looked somewhat forlorn as they watched me return to the car.

Cattle in a field alongside Thatchers Lane at Sopley melded rather well with the subdued landscape. 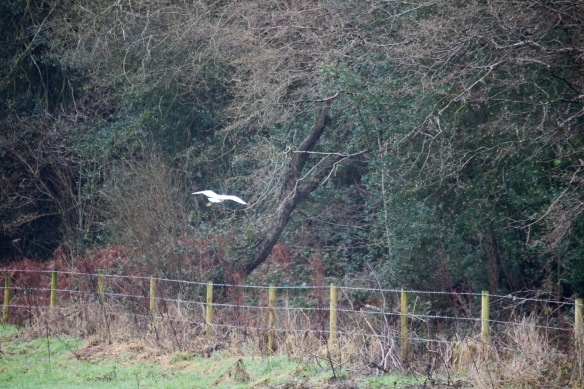 There is a deep ditch along this road. It is now well topped up, and clearly held much attraction for the heron that burst from it every time we approached, flew a bit further, and disappeared down below. Despite keen tracking, I was unable to get a decent shot in. eventually it took off across a field and dropped from sight. We then passed a stream flowing at right angles to the ditch. Sure enough, some distance ahead, was our happy quarry. Alongside the stream ran a footpath. I took it. At last the bird sprang out from the undergrowth and presented me with my final opportunity. This was it. Jackie’s message to my readers is: “That took a lot of effort.” 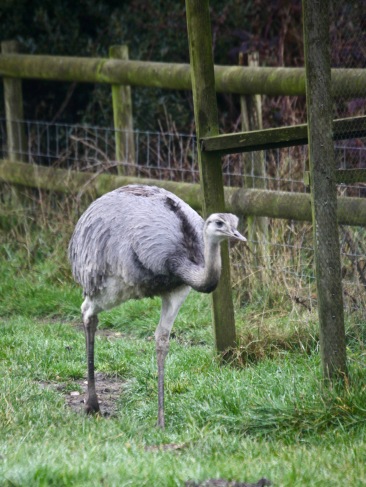 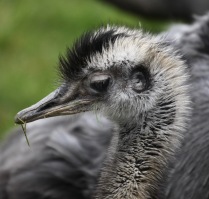 We crossed from Thatchers Lane into Fish Street at Avon. After a while, Jackie stopped suddenly, backed up a bit, then came to a halt. “They aren’t going to fly away”, she exclaimed. “What is that?”, I asked, peering at a grey mass behind a thorn hedge. “An emu” she replied. These birds, of course, cannot fly. Never having seen one before, I was intrigued by the motion of their necks, as they mimicked the movement of a snake charmer’s cobra, curling low in an arc then stretching upright and repeating the dance.

It will come no surprise to anyone who has seen our lunch that all we required this evening was a small slice of pizza with which I drank a little more Shiraz.

Our 212 mile round trip to Mat and Tess’s home in Upper Dicker gave Jackie and me a whole new slant on driving rain.

We were there to celebrate New Years Day with them, with Poppy; and with Louisa, Errol, Jessica, and Imogen. The families were gathered in the Village Shop where we enjoyed Tess’s meal of glazed ham, roast potatoes various salads, and red cabbage, followed by a dessert of Christmas pudding, ice cream, and brownies. My beverage was malbec. No further nourishment was required after we returned home. 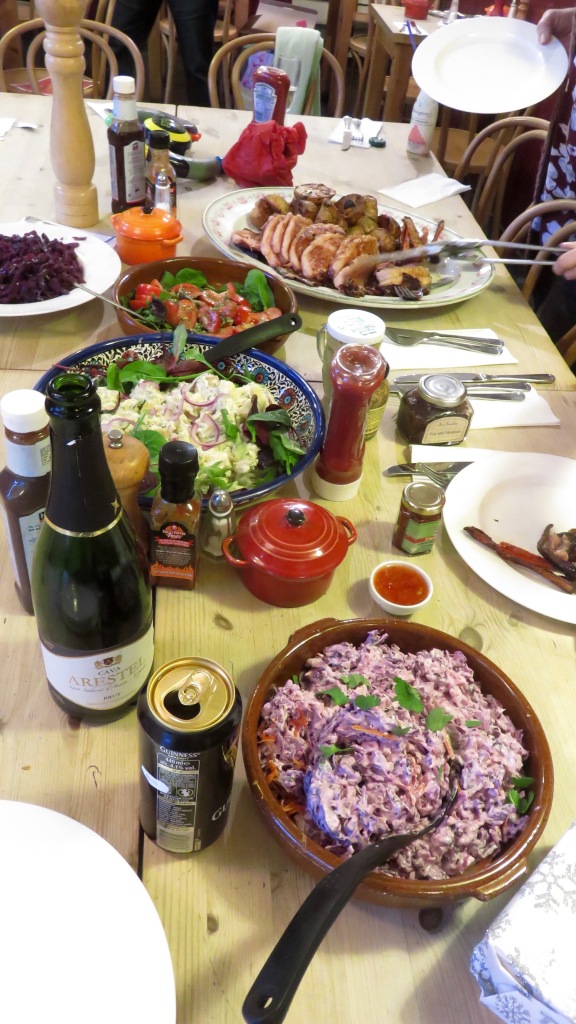 The door was locked, but several hopeful customers peered in the windows until they realised we were having a private function.

Within seconds, the two little girls were jumping up and down trying to give us our Christmas present. A general distribution ensued. 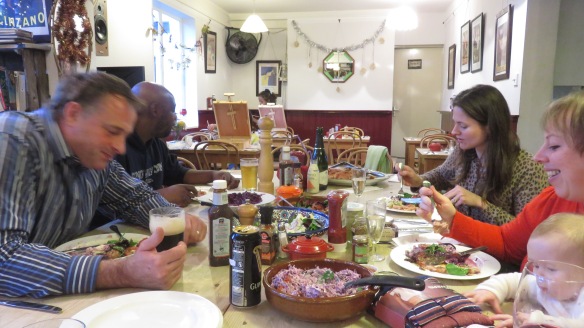 When we sat down to eat Jessica and Imogen disappeared behind their easel and canvas kits we had given them. They can be glimpsed at the far end of this picture which, along with others shows something about the evocative atmosphere of the cafe area. 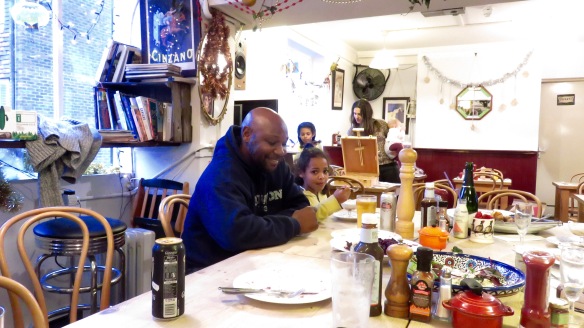 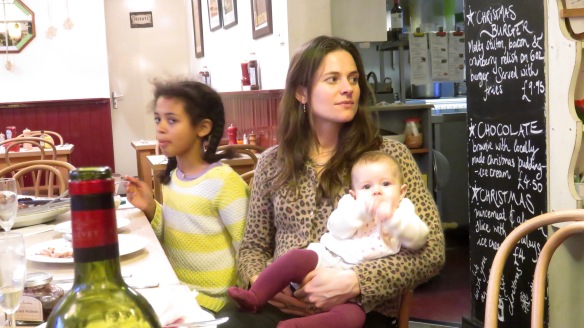 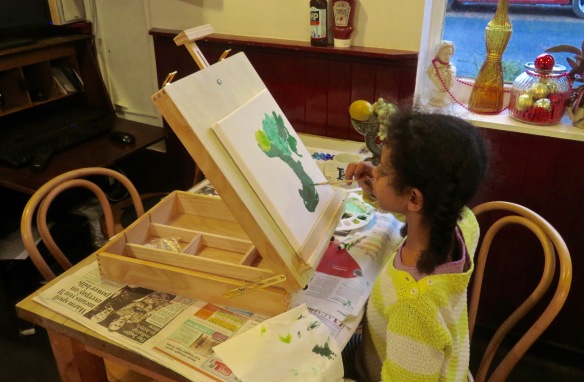 Jessica painted the still life to her right, 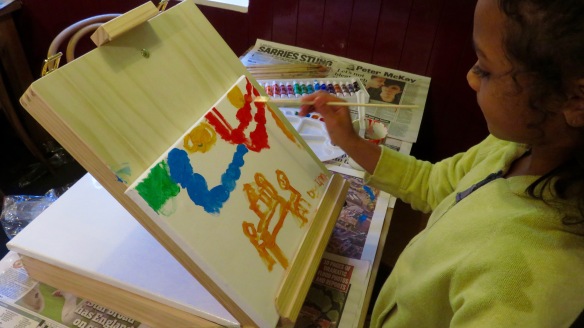 and Imogen the dining table with decorations above. 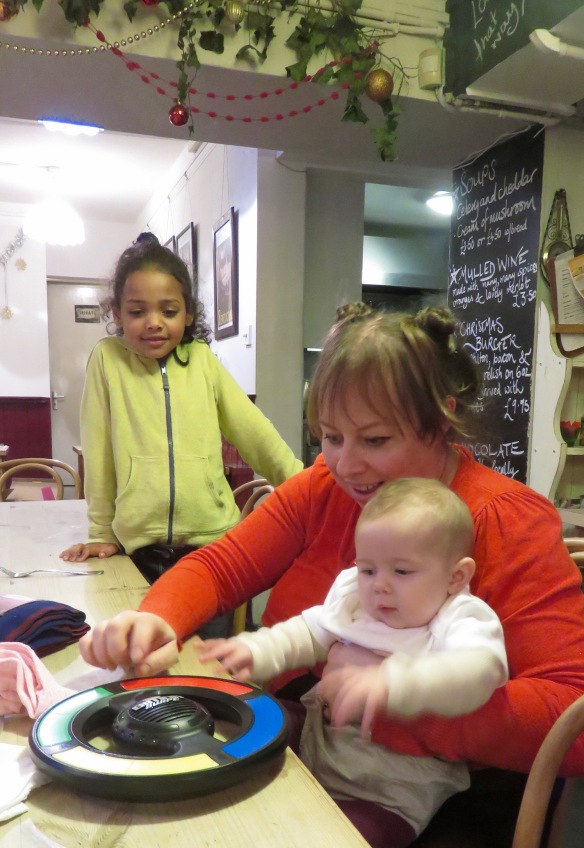 Poppy tried out most of the other available presents. Here she is watched by Imogen. 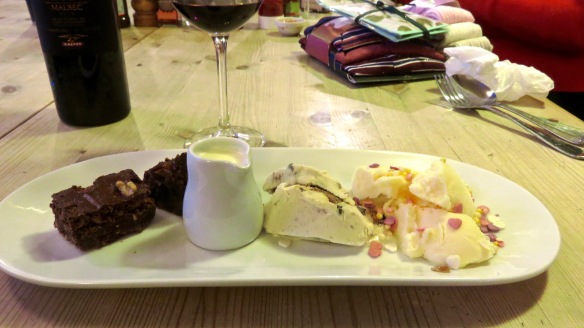 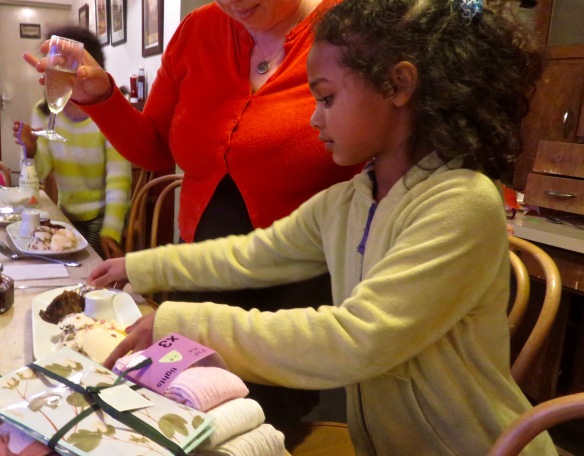 was served by the girls, who will be attending to paying customers at breakfast tomorrow.