Storm Ciara hit us during the night and continued throughout the day.

After lunch we drove to Milford on Sea. We seemed to have joined a weekday rush hour – except that it is Sunday. The coastal car parks were chock-a-block with other vehicles. 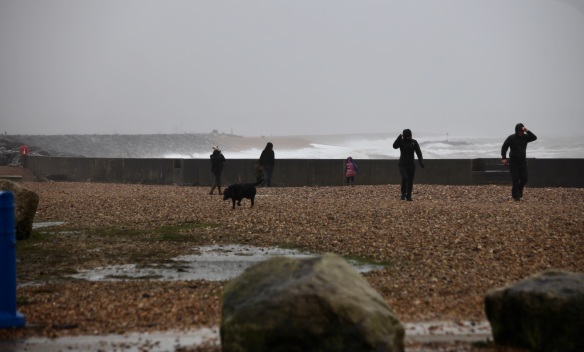 Families and other groups were out in earnest bent on watching 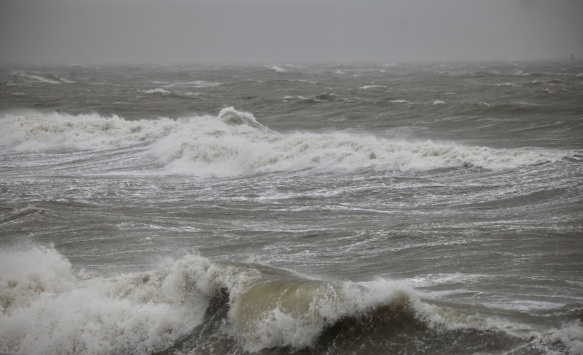 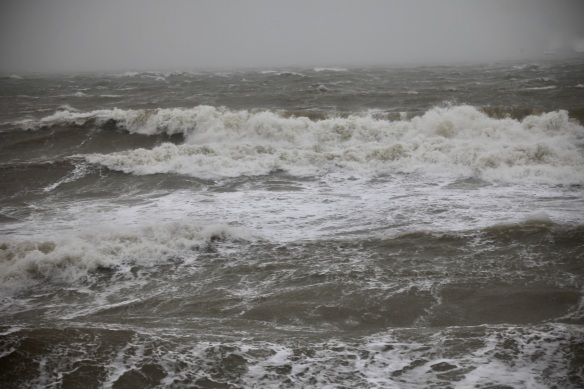 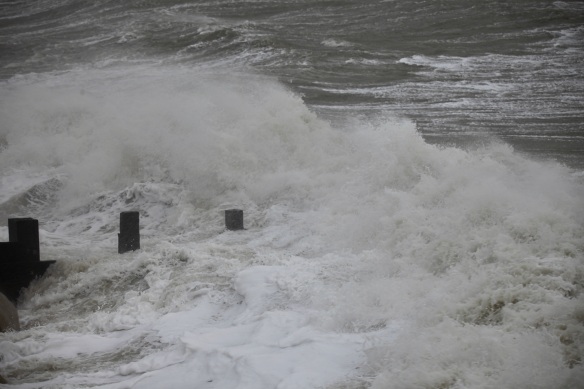 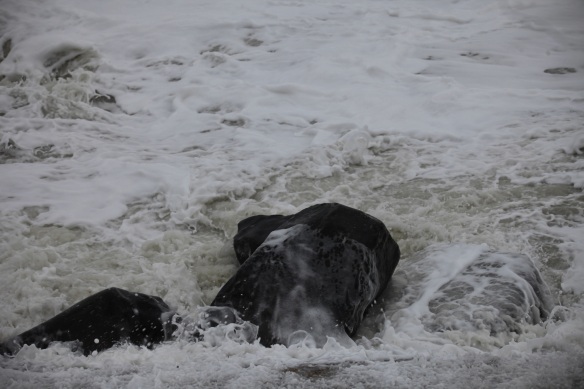 the raging grey-green waves with their milky spray battering breakwaters and churned to cream on contact with rocks. 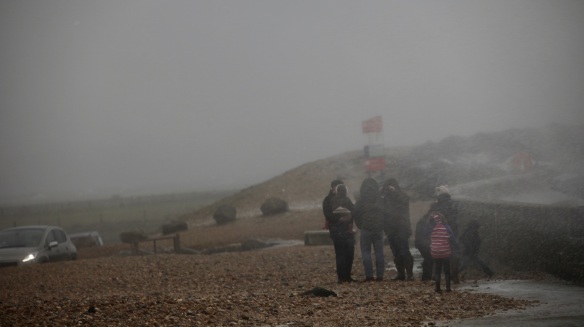 Sometimes subjecting the spectators to a snow storm, the spray surged over the sea wall settling in pools on the shingle. 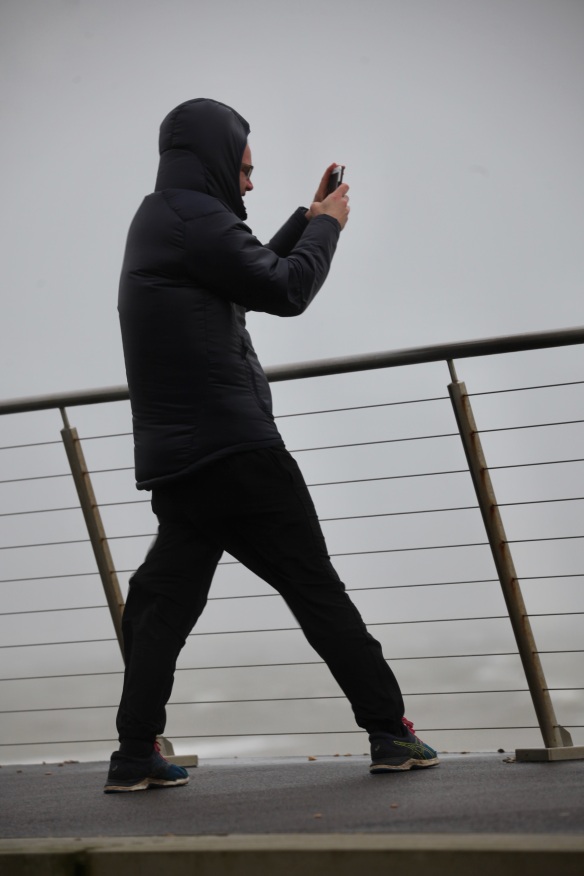 Many mobile cameras were employed.

A cheery ruddy faced gentleman rode a mobility scooter along the promenade bearing the slogan “Respect The Water”.  This seemed particularly relevant today.

The gusting winds ensured that I didn’t spend much time on foot myself. I didn’t want be blown away. 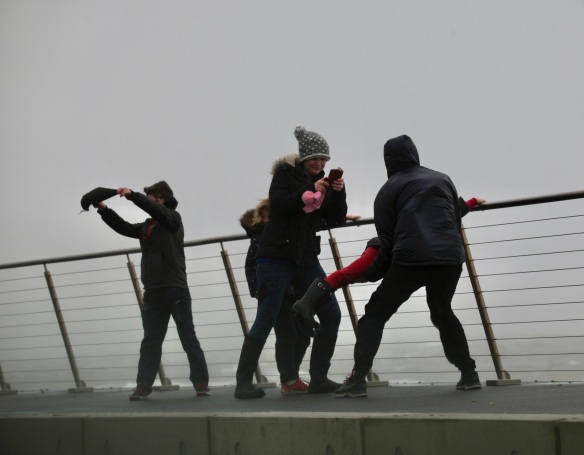 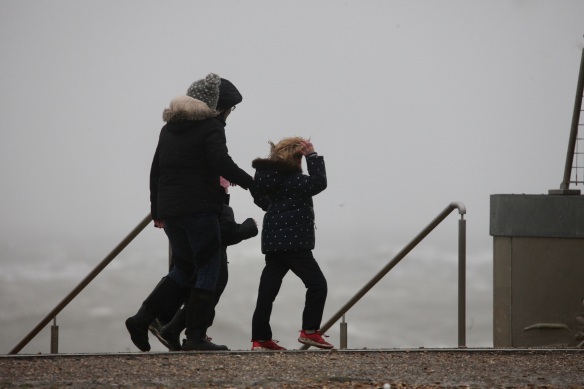 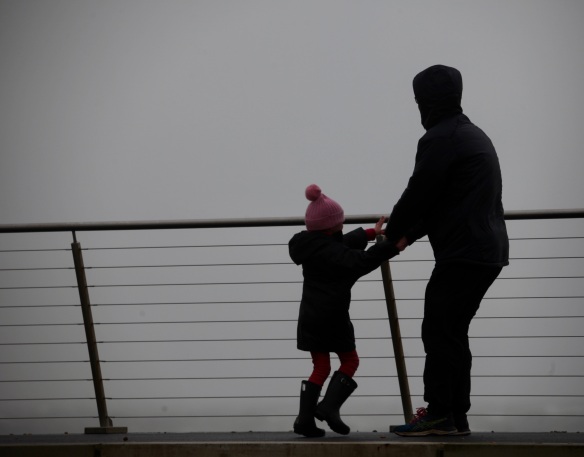 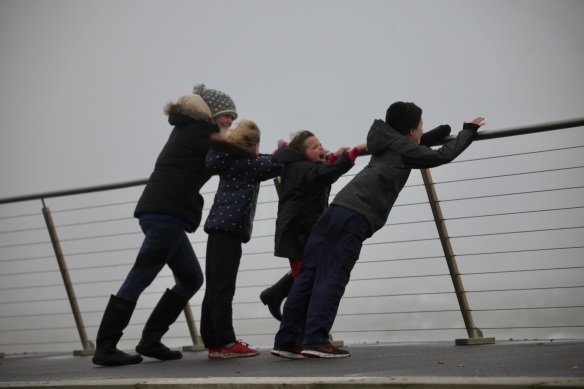 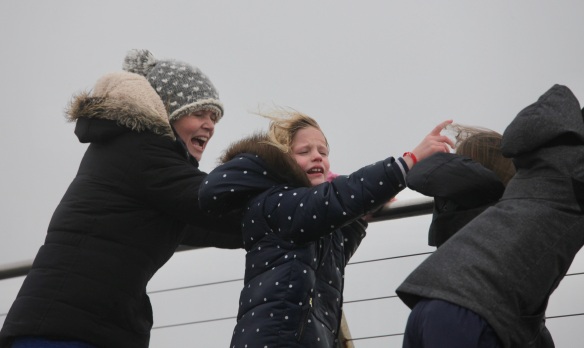 Some of the children found the experience somewhat frighteningly exhilarating.

When we returned home I watched the Six Nations rugby match between France and Italy.

Later, we dined on Jackie’s tasty beef and mushroom pie; roast potatoes, onions, mushrooms and peppers; and crisp cauliflower and broccoli with tender runner beans, with which I drank Doom Bar and the Culinary Queen abstained.

CLICK ON IMAGES TO ENLARGE. THOSE IN THE PAIR ACCESS A GALLERY THAT CAN BE VIEWED FULL SIZE BY SCROLLING DOWN THE PAGE AND CLICKING THE RELEVANT BOX.

As I struggled with ensuring I was digging up allium bulbs around the patio without damaging surrounding plants, I reflected on the tiny thyme twigs that, three years ago, I rescued from the butler sinks lost among the undergrowth covering the Dead End Path. 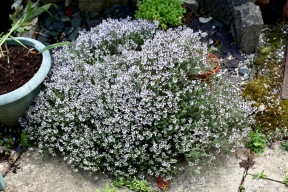 They are doing very well in their stony, sunny, new home, and don’t at all mind the dry weather we are experiencing.

This afternoon we went for a drive in the forest.

At Burley a cricket match was in progress.

The scoreboard, stationed in front of the pavilion and changing rooms, demonstrated what was obvious to spectators, namely that the bowling side was in receipt of a drubbing. There are eleven players per side in this game. Ten wickets may fall before the innings ends. Sometimes the captain may declare the innings closed before that happens. The top line of figures on the board shows the total, in this case 175. The next is the number of wickets fallen – 4. Then follows the score made by the last batsman out – 33. This was a good score for only four wickets down. The young man wearing pads in the picture was the next man to bat. He was having a long wait.

There is always a drinks interval during each innings at cricket. It was only fitting, therefore, that we should stop for one at The Foresters’ Arms at Frogham, before taking a leisurely route home. 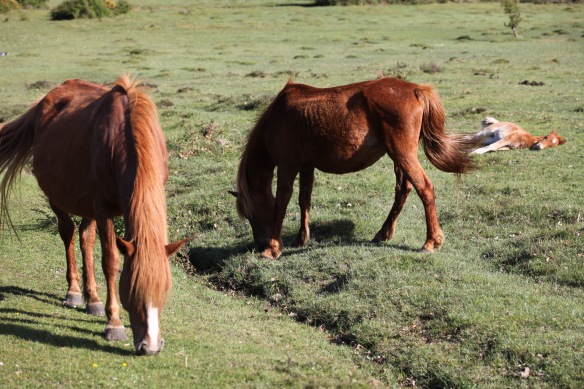 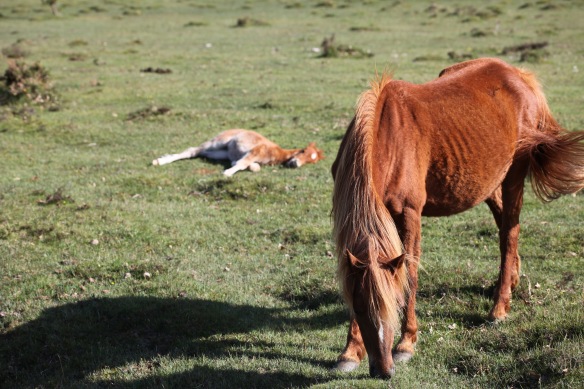 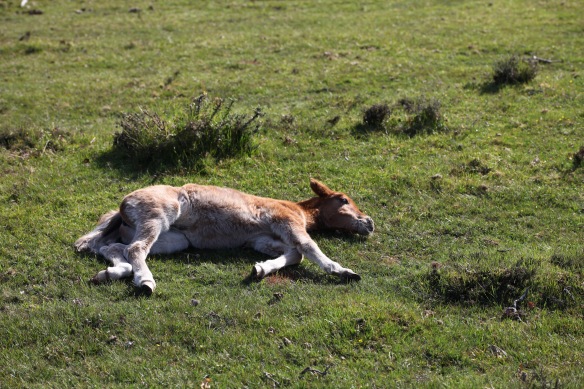 Alongside Roger Penny Way the parents of a pony family cropped the grass while their offspring sprawled beside them.

Further on, another mother led her foal across the road in front of us. 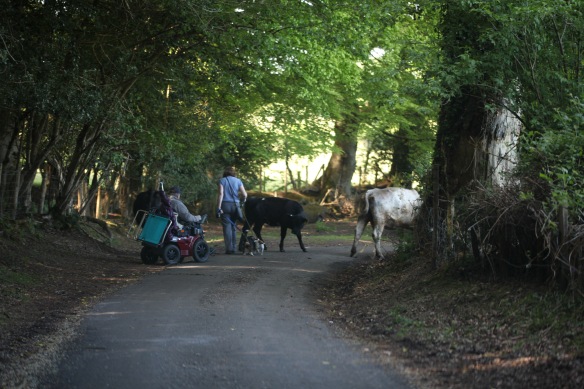 In the lane around the back of Cadham we encountered a fascinating grouping consisting of a gentleman in a mobility scooter, a woman, a terrier, and cattle with a calf. Naturally we waited for them to sort themselves out. The man, woman, and dog took themselves to the side of the road;

one of the cows cleaned its hoof; and the calf stayed firmly planted.

The woman kindly shooed it off.

Outside Lyndhurst a less successful attempt was made to persuade another animal to move along. 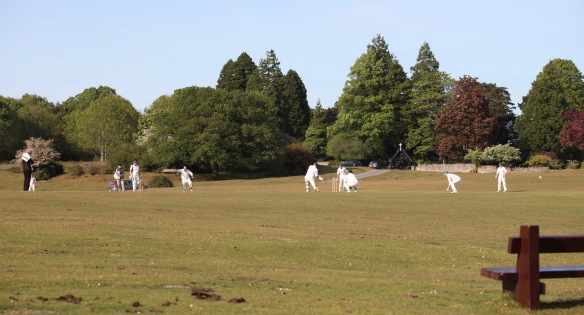 This time a cricket match was set on a rather undulating piece of ground against a backdrop blessed with a rather splendid thatched pavilion.

A pair of donkeys in the outfield ignored the flanneled sportsmen, and gradually made their way towards the pitch.

After a while one of the players clapped vigorously. This caused one to shift a few yards. It is possible that the cricketer was mindful of the rule about striking an obstruction with the ball. If a ball is hit to the boundary of the field without bouncing, six runs (as the points are called) are awarded. If the ball does hit the ground before crossing the line, the score is advanced by four runs. Whether or not the ball bounces first, a strike which hits an obstruction on the field of play is awarded 5 runs. Consequently hitting a donkey is worth 5.

This evening we dined on Jackie’s superb chilli con carne with vegetable rice and runner beans. I finished the cabernet sauvignon and Jackie drank Peroni.