Anne stayed the night and we got up early for coffee and seeing her off back to London before her return to Athens.

From ‘The Royal Horticultural Society’s Encyclopaedia of Plants and Flowers’, Jackie has established that yesterday’s unknown shrub is a Siberian lonicera tatarica, or Tartarian honeysuckle, regarded as a pernicious weed in North America. I amended the post accordingly.

Another four tons of gravel was tipped onto the back drive this morning. Hopefully that will be enough to complete the layer.

A light blue wash would not have been our choice of cladding for the outside of the house, but it must have been an improvement on the bright pink we understand preceded it, and we are becoming accustomed to it. I have to admit that it sets off the wisteria on the back wall rather well. 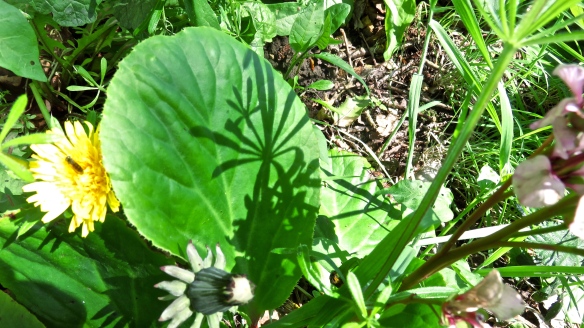 Later this afternoon I walked a few yards down Downton Lane, where Sticky Willy or Lady’s Bedstraw cast its shadow on on the hedgerows as it began to scale the other plants; and the earliest dandelions are now demonstrating that time is running out for them.

Before that I had scanned a few more slides from November 1972, from my stay at Blackheath. On a walk, Michael posed on a park bench, while Becky was too interested in whatever she was examining to take any notice of the camera. 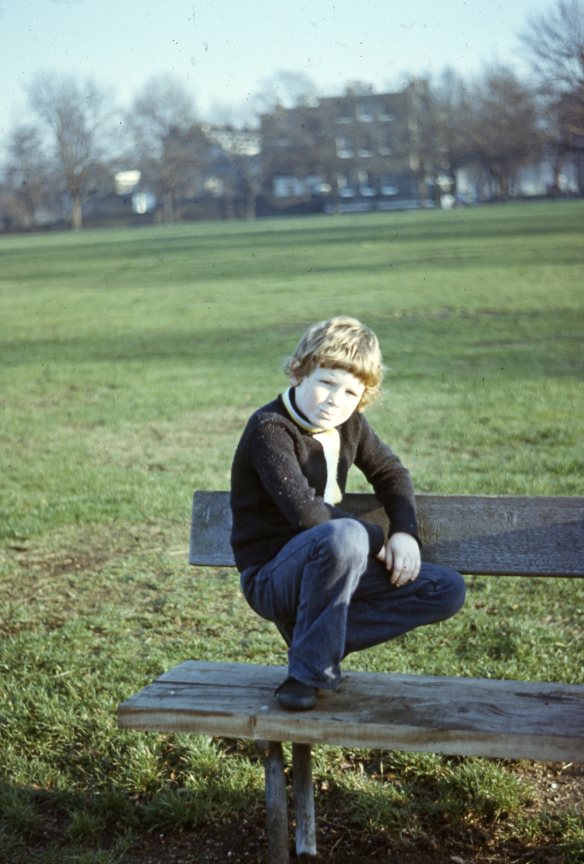 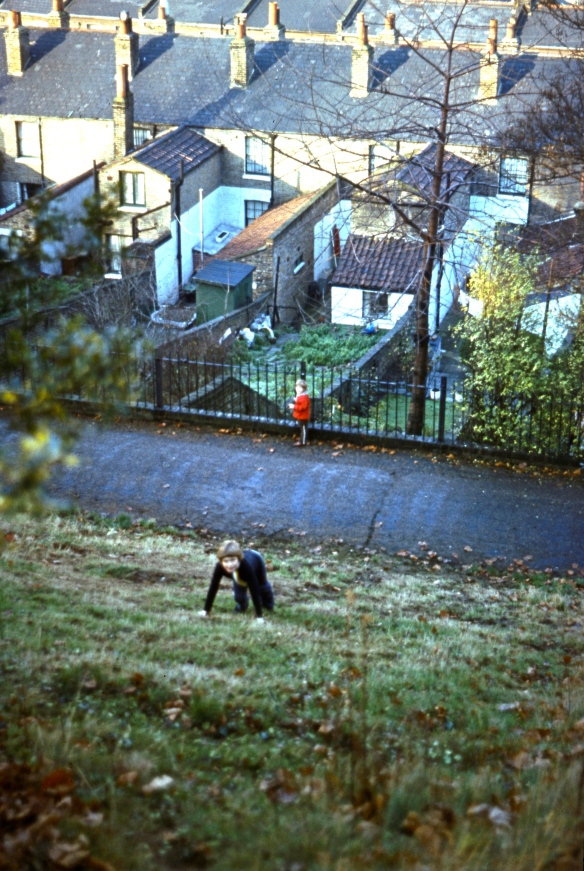 Wherever there is a grassy bank it is imperative for children either to roll down it or to climb up it. The one we came across must have been too steep for a roll, but Michael and Matthew ascended it. Matthew and Becky enjoyed peering through the railings of the terraced housing, probably speculating about who lived there.

Land, even in the suburbs of London, is scarce. If you are rich enough you can buy a large house with plenty of space, but for ordinary people, various generations of developers have built rows and rows of these terraces, each with their own small plot of land. Although London had been growing since the Londinium of the Romans, it was the Victorians who began the serious urban sprawl.  For example, after the advent of the railway, they built the southern part of Wimbledon, where I bought my first house. Each new wave has brought its own architectural style, extending what is now known as Greater London.

Taken from YouTube, The London Evolution Animation charts the growth of the capital from Roman times to 2013. I think it repays taking up the 7 minutes playing time.

This evening Jackie’s superb savoury rice accompanied Lidl’s splendid rack of ribs in barbecue sauce, for our dinner. I imbibed more of the Merlot and Jackie drank sparkling water.

Jackie spent most of the day cleaning and renovating the rancid master bathroom. This floor, unevenly tiled in some kind of rubbery squares, gives an example of what she was dealing with. The difference she has made is evident in this photograph taken as she began. When I returned from my walk the whole surface was the colour of the clean ones you see. From Downton Lane I took the path through the fields and alongside the bluebell wood, into which I deviated. The tractor ploughing against the backdrop of the Isle of Wight on the horizon attracted its usual entourage of gulls and rooks. When I reached the road I turned left and continued on past the bottom of our lane to Milford on Sea. Cattle alongside this route seemed oblivious of the then distant ploughman.

As I marvelled at the weeds and grasses forcing their way through the tarmacked surface of the narrow path to Milford, I thought fondly of Dickie Hamer. Father Hamer, S.J. was the gentle, well-loved, Jesuit priest at Wimbledon College who guided us towards O Level French. I don’t remember why we called him Dickie. Perhaps his first name was Richard. It was he who had first told us of the power of something as slender as a blade of grass to battle its way into the sunlight in search of the energy for photosynthesis. One day, as he took a tour round the classroom, he admired the drawings Matthew Hutchinson had made in the margins of his exercise book. ‘I’ll have some of that’, I imagined. So, on another occasion, I started embellishing my pages. When Dickie reached my desk, instead of the hoped for praise, I received disappointed admonishment. ‘Look at that book’ exclaimed the schoolmaster. I hear his voice, see his face, and feel the shame to this day. The experience was worsened because I knew I could never match Matthew’s art.

A game of catch cricket was in progress on the Hordle Cliff top. When the ball was hit in my direction and I failed to grasp it, all round hilarity ensued. My unspoken excuse is that a cricketer accustomed to pouching a hard leather bound ball cannot catch a bouncy one designed for tennis. And anyway my effort was one-handed with the camera hanging from my wrist. Moreover, one bout of shame is enough for any one day.

I returned by the Shorefield route at the beginning of which is a house that in dry weather has baskets of books outside for sale in aid of children’s charities. A couple had parked their car and stopped to make a selection of purchases.

This afternoon I made a start on the garden. In the immortal words of Captain Lawrence Oates, ‘I may be some time’.

For one of my birthdays in the early Newark years, Jessica gave me a cast iron replica of the Nottingham Castle benches. This has accompanied me on most of my moves since, and brought to Downton from storage by the splendid Globe Removals team. There are twelve hardwood slats linking, by bolts, the very heavy metal sides. Whilst at Sutherland Place I replaced some of the deteriorated wooden sections with iroko I had cobbled from a picnic bench. The bench has been dismantled for transit. I decided to put it together again.

The cast iron pieces lay beneath the heaviest skip pile consisting largely of IKEA contiboard. I shifted all that and dragged the iron out. Then I couldn’t find the nuts that held the bolts in place.

So I had to do something else, and made a start on weeding the paths. I didn’t get very far before diverting myself by looking up at the shattered tree. The main trunk of this as yet unidentified plant had obviously suffered in the winter gales. I had to cut the top off. There was no time like the present. I sawed off the damaged section, lopped up the branches just coming into leaf, and carried them to the far end of the garden where there has obviously been a bonfire at some time.

All this time Jackie continued to work like Helen, or maybe another Trojan, upstairs, apart from a small break when she pruned a climbing rose in an effort to preserve my scalp when walking underneath it.

I suppose every garden has its pernicious weed that defies all efforts to eradicate it. Ours I recognise, but cannot name, from the garden at Lindum House. It is a long trailing and climbing creature with velcro epidermis that clings to anything. The creeper emanates from a buried, elongated lichee like object burrowing underground. All I will have time for this year will be to pull the greenery up by the handful before its little white flowers appear.

Extracting one such cluster revealed this fascinating little plant:

Each set of petals is about the size of a daisy. I don’t know what it is.

This evening we dined at The Jarna restaurant, the decor of which was described two days ago, when I vowed to return with my camera:

Sam was doing deliveries himself tonight.

At one point he went out into a heavy shower of rain. He placed his container beside his car whilst he opened up the boot.

This could be seen through the tiger left in the window glass otherwise covered by a laminate.

Ceiling lights of different hues imparted their glow to the diners, to their napkins, and to Sam’s head as he took the orders. Ours was green.

The food was good too.

P.S. Jackie put this comment on Facebook: Just done some research, seems that Ladies bedstraw is slightly different, it is Gallium verum , the weed in our garden is Gallium aparine , AKA- catchweed, everlasting friendship, Robin-run-the-hedge, even sticky Jack, and my favourite, Sticky Willy!!