Jackie and I spent the best part of the daylight hours on an increasingly gloomy day pruning a crab apple tree. There are two in the front garden. She had worked on the smaller one last week. Today we tackled the biggie together. The tree had many branches crossing and rubbing against each other, which, especially in a fruit trees, is a no-no. Others stretched skywards endangering telephone wires in the street outside. There was only so much that could be done with loppers, and extensive sawing was required. Afterwards the debris had to be cut up for burning, and carted to the far end of the back garden, whilst the poor abandoned fruit was swept up.

Oh dear! I shouldn’t have mentioned back, for mine was again giving me gyp. That is why, when I took my walk in fading light I only travelled to Shorefield and back. Dammit! I’ve said it again. (A wonderful language, English. I’ve just used ‘back’ for three different meanings – and now I’ve iterated it).

I sat by the stream, had a rest, and explored my camera settings. I am of the generation who never can utilise all the facilities on modern electronic devices. I only use my Samsung Galaxy 4 mobile phone to make and receive calls. This despite the fact that my friend Luci, and my daughters Louisa and Becky produce admirable photographs with theirs.

So it is with my Canon SX700 HS camera. All I have currently managed to adjust is switching from automatic to manual focussing and, more recently, to shoot in monochrome. There are, however, numerous settings that provide different effects. Having nothing better to do, I sat on a bench and explored various new possibilities.

Having been a lifelong devotee of analog film, I turned to digital for the immediacy needed for this blog. The hilarious first purchase is recorded in the post ‘Choosing A Camera’. There are many advantages in digital photography, one of which is its ability to cope with the poor light available late this afternoon, but I still find film more natural. Imagine, then, my delight at finding a setting that reproduces the colours found with positive film, that which produces colour slides, always my favourite. I only hope I can remember how to do it again.

After the first two pictures reproduced here, I experimented with it. The second image of the holly by the stream demonstrates the difference. These were taken perhaps ten

minutes apart. I had first experimented with a leaf at my feet. I deleted the original version.

The close- up of a rose that still blooms on the bank shown above, was photographed with 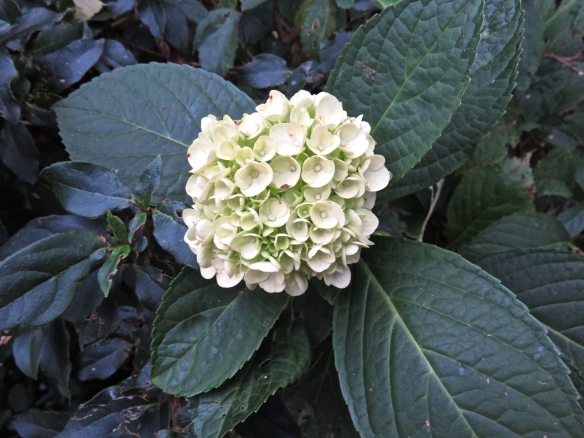 the film setting, as was the second blooming of the hydrangea on the approach to the

footbridge, and the stream itself. This final picture demonstrates digital’s ability to read poor light.

I often enhance my photographs to a greater or lesser extent in iPhoto, but chose not to do that today, the better to illustrate my points. I would be interested in other views, especially those of Ginene, who has expressed a preference for the products of film. And please remember I am an amateur.

We both chose Cimarosa Pedro Jimenez 2013 to accompany Jackie’s meal this evening of  haddock on a bed of spinach with mashed potato, crisp carrots, and runner beans. It was delicious.