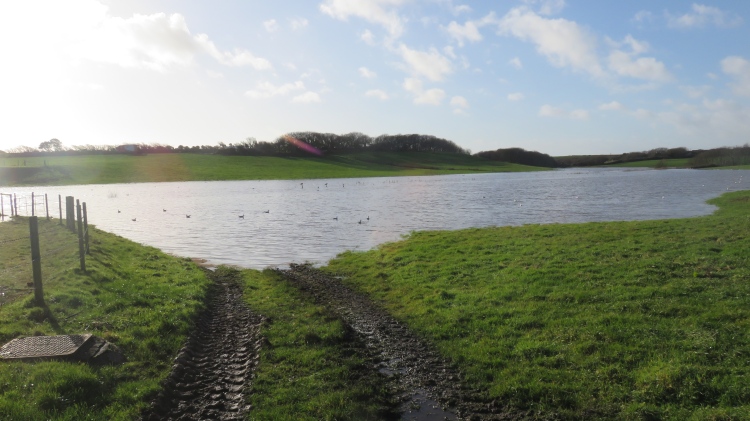 Heavy overnight rain had left lakes on the landscape and pools on the roads. Tractor tracks disappeared into a field now occupied by waterfowl. On my walk home from  car trip to Milford on Sea, I took one look at the overflowing stream alongside the footpath leading to the nature reserve, and decided to take the Park Lane route to the clifftop. As I received a sparkling cascade thrown up by a speeding motorist, I realised I may have been slightly mistaken in this.

Councillor Matthew Goode has been helpfully engaged in a conversation on Streetlife about the replacement of the footpath that fell into the sea last summer. Local residents are concerned about the time this is taking. It seems to me it would be rather rash to replace it before proper geological studies have been undertaken. It is easy to see where the next falls could possibly occur. The dog in the photograph was perhaps conducting its own survey. 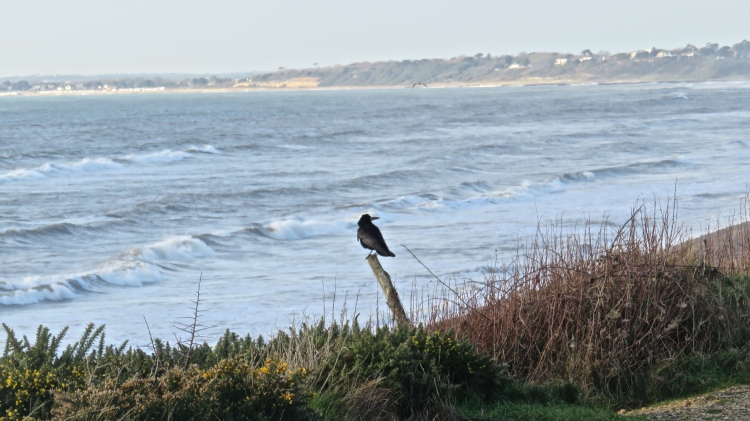 Whenever rooks or seagulls find themselves a convenient post on which to perch, they are dive-bombed by relatives wishing to supplant them, and generally take off in a hurry. So it was this morning.

Later this afternoon, I finished reading Virginia Woolf’s novel ‘Orlando’. Woolf herself termed it a biography, which was why it was less popular with booksellers than with the reading public, because the shops believed biography did not sell as well as the fictional genre. Quentin Bell, in his introduction to my copy, describes the work as a prose poem.

James Joyce, in his lengthy novel ‘Ulysses’, manages to occupy no more than twenty four hours in the life of Leopold Bloom. The shorter piece from Mrs Woolf has Orlando, born at the end of the sixteenth century, still living in 1928, changing sex from male to female at the midway point, bearing two children, and reaching the age of just thirty- six by the end of the book.

Having met in 1922, Virginia Woolf and Vita Sackville-West’s friendship developed into a two or three year sexual relationship, perhaps culminating in this gift from Virginia to Vita, first published in 1928. The writer has found a fascinating form with which to celebrate her lover; her lover’s family, the Sackvilles; and Knole, their ancestral home. Orlando/Vita glides through three centuries of largely indulgent life in elegant surroundings described in beautifully flowing, opulent, and gloriously seductive descriptive prose. Woolf was having fun, even to the extent of calling it biography. 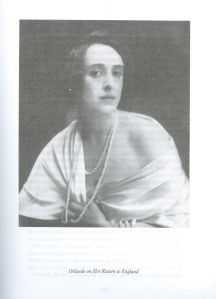 Illustrations of the adult, female, Orlando are photographs of Vita Sackville-West.

My copy purports to be no. 191 of a limited edition of 1000 of the Hogarth Press Collected Edition published in 1990. The £1 pencilled on the flyleaf suggests I bought it second-hand with no dust-jacket. Although the boards look genuine, I was surprised to find the book perfect-bound; containing several typographical errors; and a number of blank pages, not, as in Lawrence Sterne’s ‘Tristram Shandy’, deliberately left so by the author. 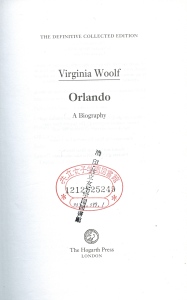 Two stamps, one superimposed on the other, giving an impression reminiscent of the London Underground, are in what my uneducated eye imagines to be Chinese. The only signs that the book may have been read before me were a few splashes of what I hope is coffee on the page edges; and pages 212/213 pasted in. Where has it been, and who drank the coffee?

Second-hand books do often give scope for such speculation.

Becky is, I know, not responsible for the stain, because that was in place when I lent it to her recently. She did, however, take the trouble to find the two missing pages of text on the internet and stick them into the blanks. Other empty pages should be part of the appendices.

This evening we dined on Jackie’s juicy chilli con carne and my plain boiled rice, followed by Pearl’s delicious Dutch Apple Cake with a.n. other’s cream. I started on an excellent bottle of Arene des Anges Costieres de Nimes 2013 given to us for Christmas by Helen and Bill.