This morning’s sun shone blindingly bright in clear skies; the temperature was finger- tingling chilly. Because the meteorologists had predicted rain this afternoon we drove out early to Mudeford Quay.

I had never seen the normally tranquil harbour water as choppy as it was today.

The high tide surged back and forth over the shore line leaving bubbles clinging to driftwood; 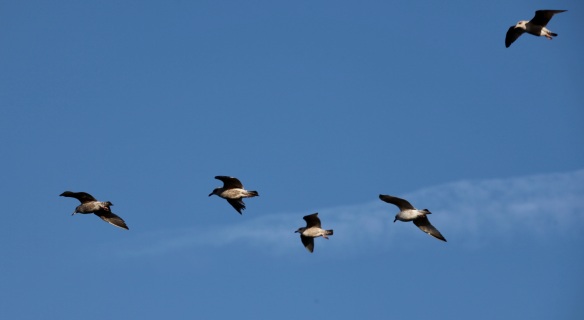 occasionally taking to the air

and settling on the grass 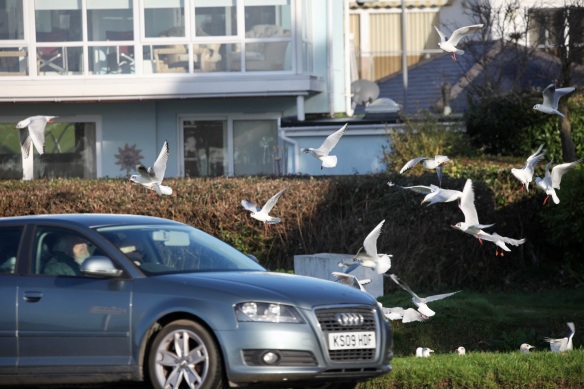 until scattered by hastening motors. 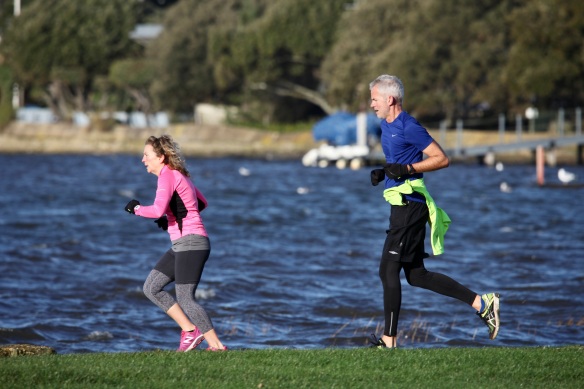 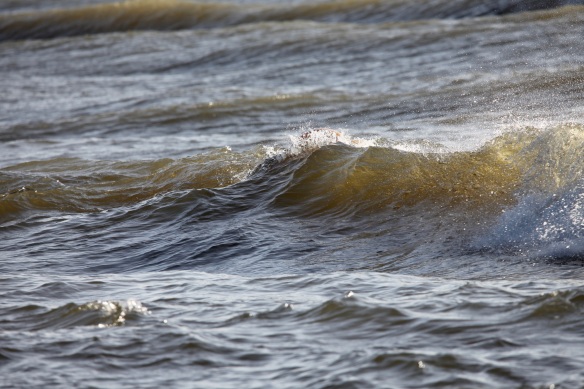 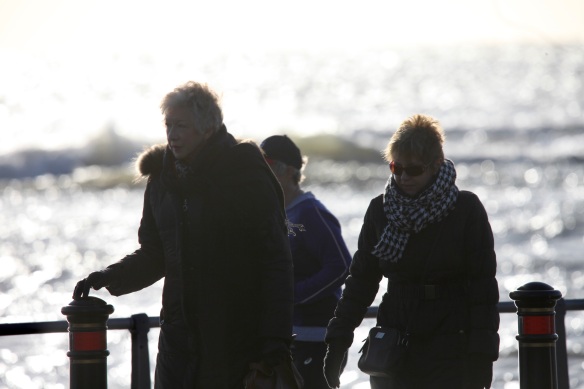 A solitary jogger trotted past two women progressing at a gentler pace, while

an eager dog towed its owner along the pool sprinkled promenade. 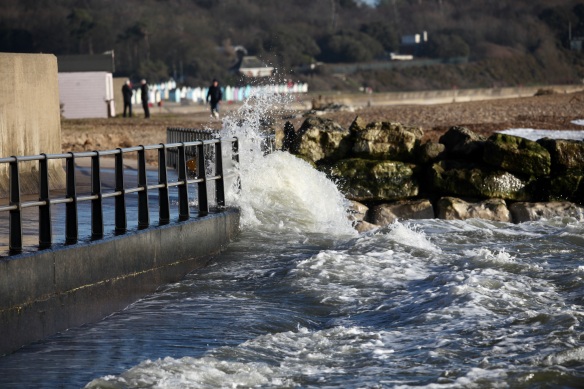 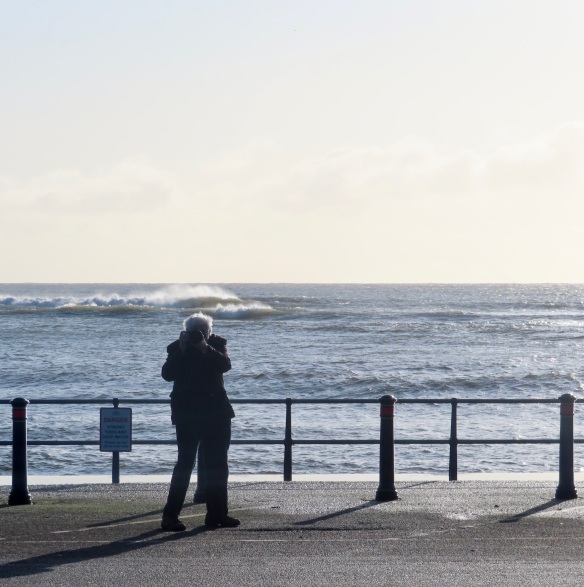 photographing her. How’s that Pauline?

yacht masts and a bench, and related the story of the day.

Before my Chauffeuse had moved over to the quayside a young woman had emptied a carrier bag full of food onto the grass in front of Jackie’s car. Within seconds 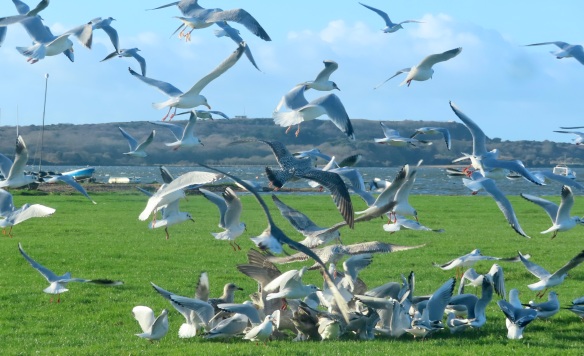 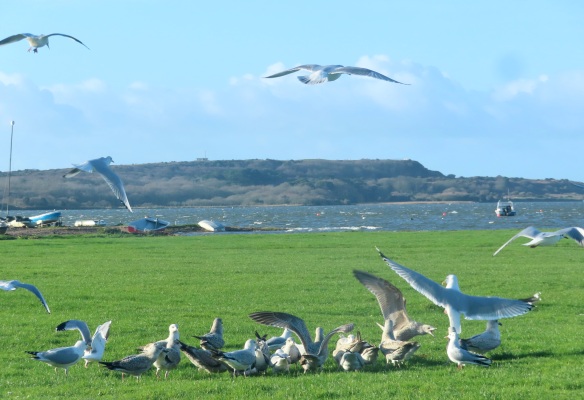 a squabble of seagulls swooped seeking sustenance and set about each other scavenging insatiably. 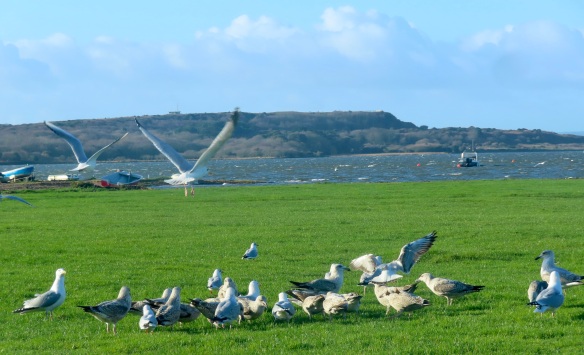 It was all over in a flash. 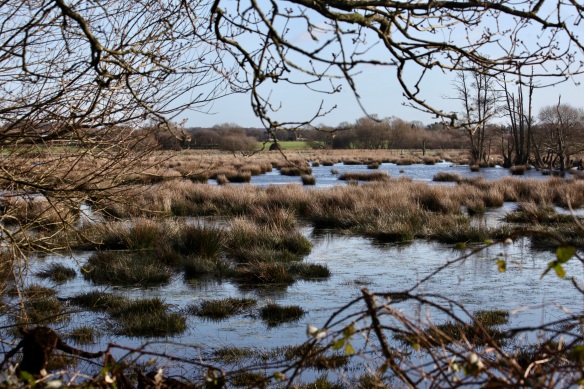 At Avon the eponymous river had spread itself across the neighbouring fields, 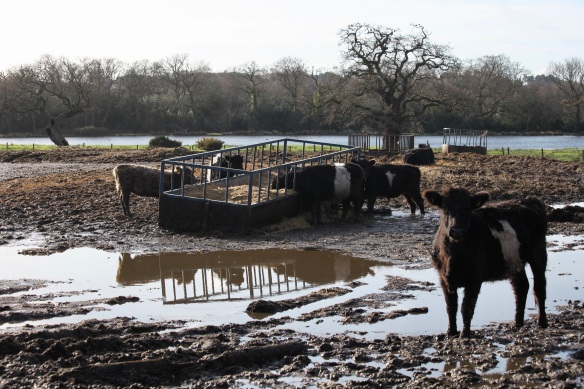 We continued on to Hockey’s Farm shop for brunch, where we were disappointed to discover that the café was closed because a new floor was being laid. 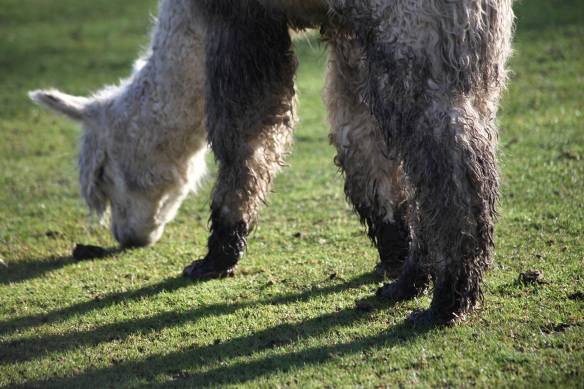 The straggly-damp alpacas in the pasture might have appreciated their own new floor.

A thatcher’s pig has flown up onto the roof of the cottage repaired last summer. 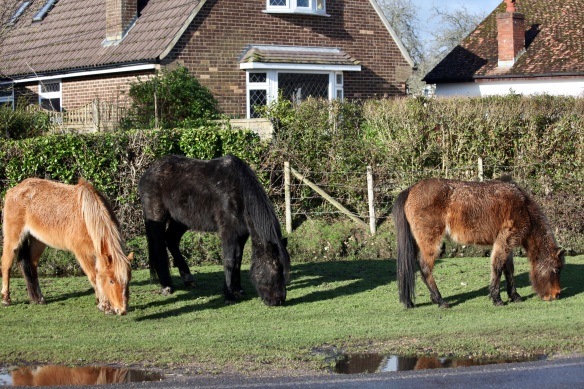 The hair of a group of ponies at South Gorley may have been dry, but now it needed a good shampoo. 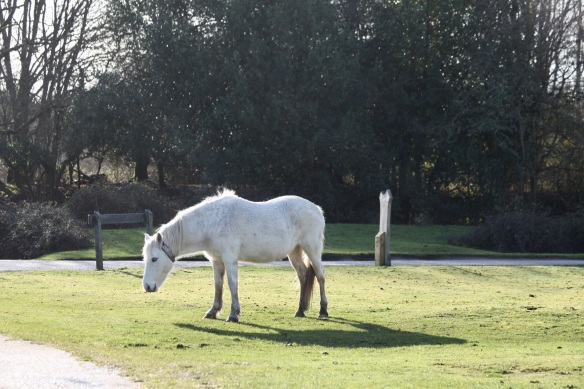 Others a little further on seemed to have had one already.

We returned to the excellent Café Aroma in Ringwood for our plentiful brunch, then travelled home facing oncoming driving sleet.

This evening we dined on Jackie’s watercress soup and rolls with which I finished the Costiere de Nimes.

This afternoon I joined Jackie, Becky, and Ian on a trip to the Beachcomber Café at Barton on Sea. The day was cold and bright. I spent a few minutes photographing 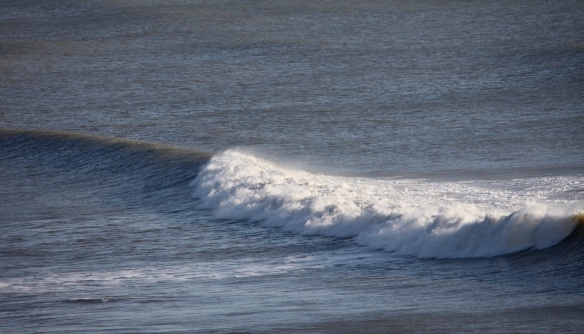 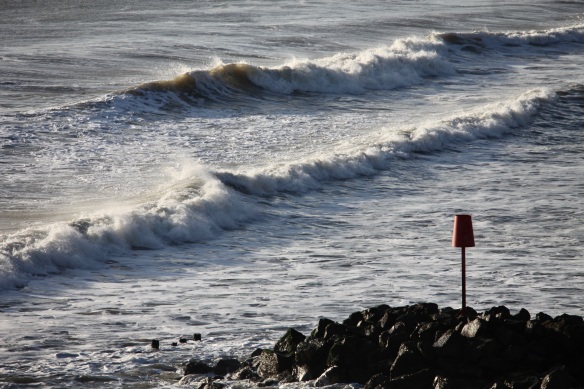 the deserted waterfront and its battered breakwaters; 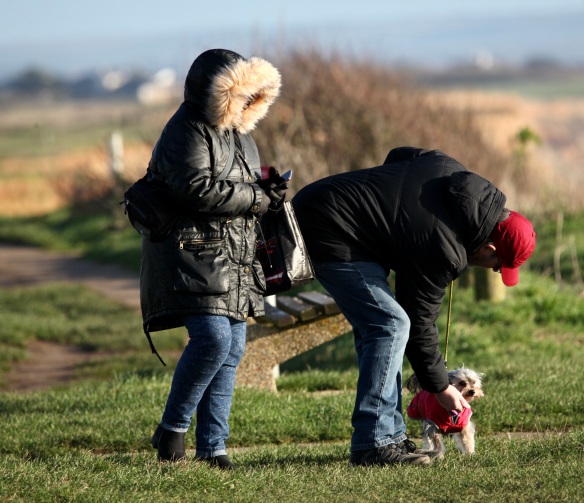 and a couple tending to a little dog,

Before retreating to the warmth of the popular café with its condensation streaked windows, its reflections, and its lingering Christmas decorations.

After a pleasant interlude I focussed on a group on the clifftop before returning to Ian’s car. I rather hoped the couple on crutches would not be blown over the edge.

This evening we all dined on a very tasty turkey and bacon pasta bake made by Becky and served with pizza and fresh salad – on our knees while watching episode 5 of The Crown which focussed on the coronation of Queen Elizabeth II. I have already recorded, in ‘Prescience?‘ my first ever TV viewing of this event which took place on 2nd June, 1953.

For the last few days we have been unable to control the smart aspect of our TV. This has meant we could only watch free to air live and nothing would record. James Peacock of Peacock Computers fixed the problem this morning. Intermittently I listened to England’s innings against New Zealand in the men’s Cricket World Cup.

This afternoon we went for a drive in the east of the forest.

One of the lessons we have needed to learn is when to expect animals to cross the road in front of us. An example of this was found today at East Boldre. Jackie slowed the car for us to see a foal. Suddenly its mother took it upon herself to lead her offspring to the other side.

Litter picking is quite an industry here. The major roads are cleared by paid staff, but areas like Hatchet Pond rely on volunteers. This group enabled their dog to participate by tossing a stick into the lake. The branch was constantly retrieved.

One spritely youngster, from its vantage point on a pony’s shoulders took a leap over the animal’s long, concave back, landing on its sturdy rump.

On Sway Road we were held up by an encounter between a double decker bus and a very long container truck. We had to admire the skill of these two drivers. No doubt the bus driver was accustomed to the situation. It was the man in the truck who had to become a tree hugger and reach out to haul in his wing mirrors before inching ahead.

On our return I listened to the bulk of New Zealand’s innings.

This evening we dined at The Wheel, Bowling Green, Pennington. We both enjoyed starters of Tempura prawns, salad, and sweet chilli dip. Jackie’s excellent Wheel Inn burger, salad, and chips featured the best onion rings she has ever tasted; my cod, chips, and peas was equally good. Mrs. Knight drank Kaltenberg, and I drank Ringwood’s Best. Service was efficient and friendly.

This cloudless, sunny, day remained quite cool (13c tops). We took a drive into the forest this afternoon.

Holmesley Passage benefited from the sunlight streaming through the trees. The two vehicles in these pictures demonstrate how narrow is this lane.

Each of the above motors is approaching one of the two fords that cross the passage.

The woodland scenes that border the lane include a number of fallen tress making their contribution to the local ecology.

As we reached the lowest point of this passage across the moors, a pair of hopeful ponies thudded across the turf.

Today, hungry donkeys seemed to outnumber the ponies at North Gorley, where a 2017 finisher took his eager dog for a run.

While photographing horses in the landscape rising to Gorley Common, I noticed

a horse and trap approaching. After I had taken the last shot the friendly driver doffed his cap.

This stream with its reflections was one of many we passed.

Jackie’s meals are all very good. Occasionally, as with tonight’s delicious chicken jalfrezi, she excels herself and produces something that would make any self-respecting chef from the Indian sub-continent sit up and take notice. Her savoury rice was equally praiseworthy and was accompanied by vegetable samosas and a paratha. The Culinary Queen drank more of the Sauvignon Blanc and I drank more of the Carménere.

This afternoon our drive began at Keyhaven.

From the hill above the village we had a clear view across The Solent to the Isle of Wight. The mainland buildings are in the foreground. A solitary yacht passes the island.

At the bottom of the slope a field of black sheep introduced their very young lambs to life. Just two of the offspring were white.

A young cock pheasant face-off was under way at East End. Quite suddenly the more timid of the two turned and disappeared into the moorland,

leaving the victor to strut his stuff.

Casper, at East Boldre, enjoyed his own observation grill.

On this fine spring morning we took a trip to Mudeford.

Gulls lined up to welcome us as Jackie drove towards the quay.

A pair of serene cygnets sailed across the calm harbour, while a hunched egret tried to pass itself off as a gull.

towards which a speedboat motored.

A silhouetted group was breaking up on the quayside,

with its usual stacks of crab pots, buoys, and ropes.

Along the coast at Avon Beach solitary walker ignored the spray, while, try as it might, by kicking up sand, a dog was unable to distract its owner from her mobile phone.

We continued into the forest where, in the vicinity of Burley, grey ponies dotted the landscape.

Having laboured up a steep hill, a trio of cyclists seemed relieved to coast down the other side.

When we returned home I ventured out into the garden for the first time since my surgery. During my tour I was delighted with the array of hellebores, cyclamens, and snowdrops that have proliferated in the last month.

This evening we dined on pork chops baked with English mustard and almonds from elsewhere; roast potatoes and parsnips; crunchy carrots and cauliflower; and tender runner beans with tasty gravy.

our favourite local Indian restaurant. Unfortunately this is tomorrow – less than a month since my knee replacement surgery. We therefore cannot manage it. This morning, featuring the above photograph, we made a card for Raja and his staff and placed in the post on our way to my physiotherapy appointment with Claire at New Hall hospital.

Progress is very encouraging. Both walking and flexibility are a great improvement on the first operation last May. I just wouldn’t have been able to sit comfortably at the restaurant tables.

The day, as evidenced in my photographs, was dismally damp and misty.

Even mistletoe was unable to brighten the lane through Bodeham,

Mallards and a moorhen didn’t mind the weather over this stretch of the River Avon,

A circling kite was occasionally glimpsed above the naked trees.

Woodgreen Common was rather obscure.

As we headed towards Godshill we witnessed exciting catching practice. A gentleman playing frisbee with a circular ring skimmed it through the air where his triumphant dog leapt to catch and return it.

Someone had left a cap on a bench overlooking what would have been a splendid view in better light. The Godshill road itself was so shrouded in mist that a recently fallen tree was barely visible.

Fog lights were essential on the high risk (of animal deaths) Roger Penny Way, where some impatient drivers continued to follow the 40 m.p.h. speed limit.

This evening we dined on an excellent takeaway meal from New Forest Tandoori. My choice was king prawn madras with special fried rice; Jackie’s was prawn curry with pilau rice. We shared a paratha. I drank sparkling water and Jackie didn’t.