I must warn readers that this post is controversial and may distress some people.

Jackie drove me to New Milton this morning and back home this evening for me to travel to St Thomas’s Hospital to join Luci in visiting Wolf.

From Waterloo I took the tube to Westminster and walked across the bridge to the hospital.

Today’s demonstration in Parliament Square was by http://www.abort67.co.uk. It was only after reading the information given to me by Liz, one of the volunteers distributing leaflets, that I realised that the photographs on display across the road were of aborted foetuses after their destruction. For those who wish to see, a clear view of these can be had by zooming in on the image.

This organisation aims fully to acquaint people with what actually happens in an abortion. They have links with PASE (post abortion support for everyone). My Social Work and Counselling practice demonstrated the importance of this.

Here is what the website of Education for Choice has to say about the history of the UK abortion laws:

In the time between the Bourne ruling and the 1967 Abortion Act some women did have abortions for urgent medical reasons or, with the consent of a psychiatrist, to protect their mental health.

Wealthier women were more likely to be able to pay to see a psychiatrist who could agree to a safe abortion, but many would have had no option but to seek illegal methods for ending a pregnancy.

The cost to women’s health of illegal abortion was high with around 40 women dying each year and many more injured. Doctors, politicians and members of some religious communities worked together to pass a law that allowed for abortion in some circumstances.

The Abortion Act was passed in 1967, a time of lively political campaigning, and is sometimes seen as one of the triumphs of the women’s movement. The reality is that it was not passed to give women rights, but to respond to a public health problem.

The law gave the rights and responsibility for decision making to doctors not women. It did not legalise abortion, but allowed for exceptions to the illegality of abortion.

Much of the law is open to interpretation and asks doctors to make a judgement based on weighing up risks rather than specifying particular circumstances in which abortion would be legal.

There have been several attempts in Parliament to restrict abortion law further by those who do not support a woman’s right to choose abortion. Those who do support the right to choose are also unhappy with the law, which is perceived to be unclear and too restrictive.

In 1990 the 1967 Act was amended by the Human Fertilisation and Embryology Act, which reduced the original time limit of 28 weeks to 24 weeks for most abortions.’

This time limit reduction indicates forensic uncertainty about the viability of life.

When does life commence? My own view is reflected in this quotation from Professor Micheline Matthews-Roth of Harvard University Medical School, in the brochure ‘What do you think about abortion?’: ‘It is scientifically correct to say that an individual human life begins at conception.’ There are other quotations, detailed information, and further graphic illustrations in this publication.

Without going into the rights and wrongs of the dichotomy that exists in UK legislation, I will simply say, that, since 1967, we have permitted the destruction of unborn children, yet deny terminally ill people the right voluntarily to end their lives with dignity. I am not here advocating euthanasia, simply pointing up the differences in stances taken.

Given that we are told that 97% of UK abortions are funded by the NHS, I spare a thought for the medics who are charged with having to carry out the task.

In a bizarre reflection of what happens to the embryos, a number of the leaflets had been ripped up and discarded on the surrounding pavements like this one on Westminster Bridge. Others found their way into waste bins.

Liz, having sought my permission, seeing that I was struggling to walk, placed her hand on my shoulder and offered up a prayer for my joints.

As I limped across the bridge I was accosted by the woman, claiming to be a gypsy, whom I had photographed railing at a tourist on 20th June 2013. Advancing on me like a Fury she plonked both her hands, clutching artificial carnations, onto my chest and proceeded, pounding my sternum and spraying spittle on my waistcoat with every word, to castigate me for refusing to accept one. ‘We gotta live,’ she cried. ‘Well do it another way. Don’t con people.’ I replied, extricated myself and hobbled off. 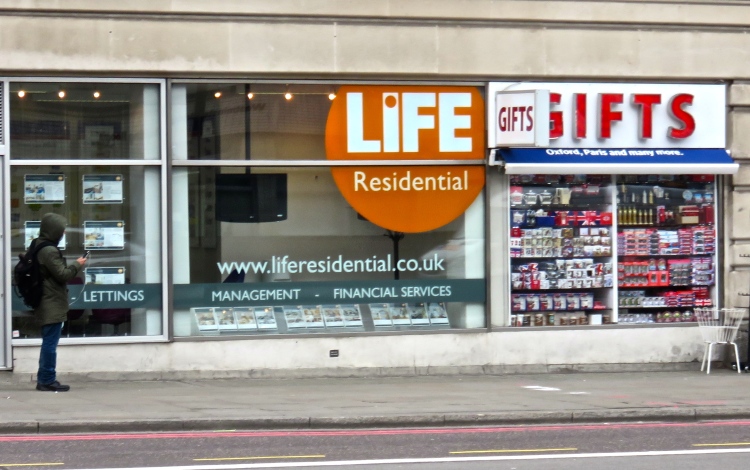 Opposite the hospital is an estate agent called ‘LIFE Residential’, its sign nicely juxtaposed with that of the gift shop next door.

Soon after leaving St Thomas’s, I met a man who told me he had, last night, stood on Westminster Bridge contemplating taking his own own life. Another gentleman had talked him out of it.

On the train I finished reading the third book of G.K. Chesterton’s ‘Father Brown Stories’, ‘The Incredulity of Father Brown’, and began the next one, ‘The Secret of Father Brown’. These tales are all about the taking of life.

Jackie and I both drank T’Sing Tao beer with our Chinese takeaway this evening.