This morning Jackie drove me to Molly’s Den and left me there to hunt for a birthday present for her, whilst she carried out various other errands. I didn’t find anything satisfactory, but the journey was worth the excellent brunch that the antiques and bric-brac centre provided.

Mine was, as you would expect, a fry-up – a first class one. I trust you can see the quality of the meaty sausages,the wedge of non-fatty black pudding, and the lean bacon. Everything was cooked to perfection, and the thick toast was probably home-made bread. Jackie enjoyed an equally well-cooked baked potato stuffed with prawns. We knew we would eat sparingly this evening.

For much of the day winds gusted at more than 30 m.p.h., and diagonal, driving, rods of rain beset us as we left Molly’s.

By mid-afternoon, The skies had cleared, and the downpour had ceased, 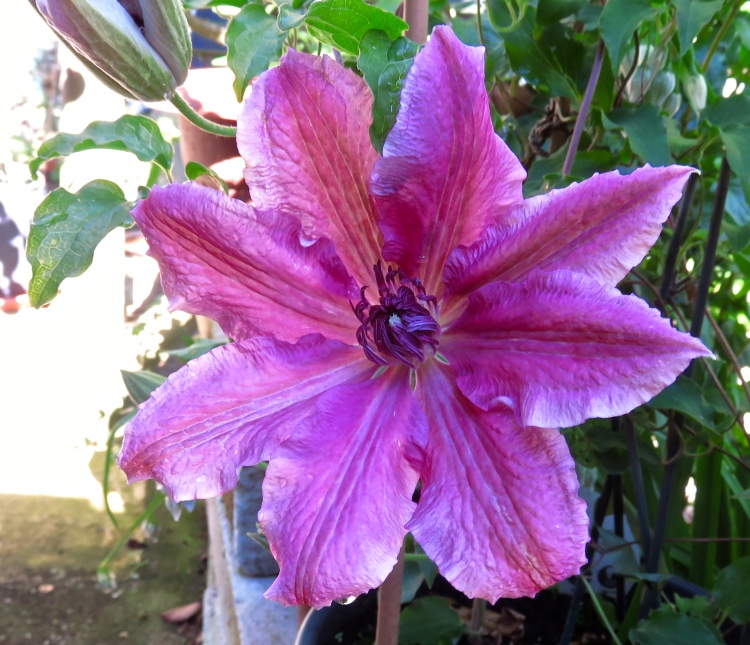 raindrops dripped from the clematis Carnaby,

a Cabbage white butterfly slaked its thirst on a geranium,

and I changed Jackie’s birthday present into a garden shed ordered from Purewell Timber Buildings.

The fourth of my  Five Photos – Five Stories, is inspired by one of our fairly frequent Instow holidays with Henry, Judith, Nick, and Lucy Pearson.

Instow is an old-fashioned, carefully preserved, village lying opposite the former fishing village of Appledore in North Devon. The beach and the village lie within the Instow Conservation Area. It was all the more remarkable, therefore, that within the space of one day in August 1999, a magical construction emerged from the pristine sands.

Led by nineteen year old Sam, a team including Louisa, cousins Nick and Lucy, and friends Gemma and James, had created a vast turreted fortress of sand, complete with defensive wall and moat, and embellished with flags. Local children became willing navvies, and the word soon got about. David Shepherd, retired England cricketer and international umpire, gave his support.

I am not sure what exactly was originally envisaged, but an idea of the scale of what was produced is indicated by this photograph of Louisa posing against the setting sun.

By nightfall, the flaming torches lit up the darkness, and what seemed to be the complete population of the village turned out to enjoy the celebration, naturally enough toting an ample supply of liquid sustenance. I expect we all eventually got to bed.

Yesterday I had published my invited story with five photos rather than the suggested one. This was because the book was a tale in pictures. The photo above, as with so many of the single shots I feature, was one of a series that followed the process of the project. Maybe one day I’ll cover the rest.

This evening we dined on Spanish omelette, bacon, and crusty bread and butter.

24 thoughts on “The Beach Fortress”