The Unidentified Fir Bed is now a Cryptomeria Bed.

It seemed a simple, straightforward, task today to dig over the bed cleared yesterday, in preparation for planting. Not so. Beneath the top layer of soil; itself riddled with spun skeins of fine vinca roots; more rock, concrete, tiles, and snakes of perished rubber hose were buried. I got no further than digging this lot out and raking over the plot. 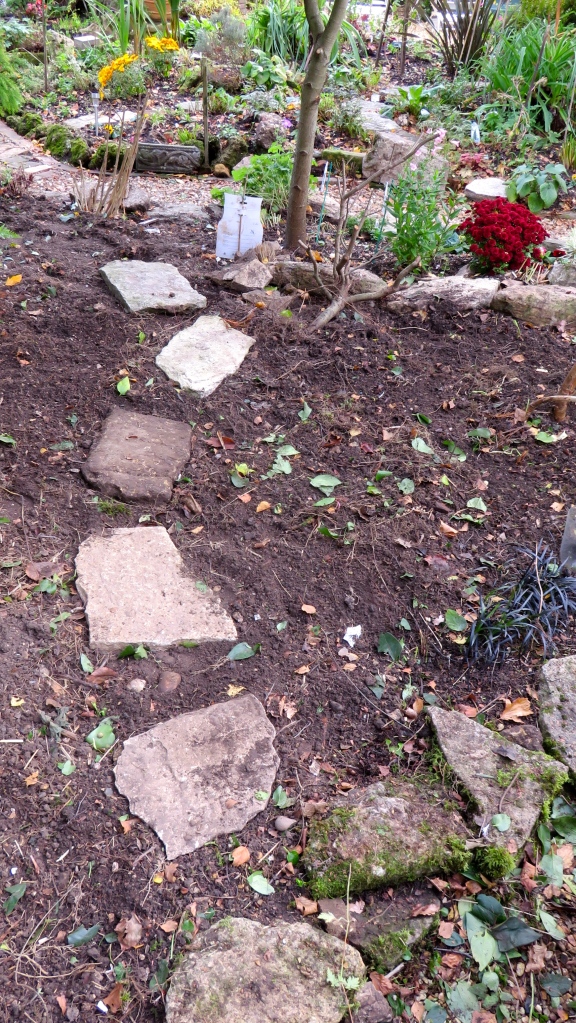 Jackie then added access stepping stones dug out from the Weeping Birch Bed.

A number of my more recent readers have asked for before and after pictures of the work we have done in the garden. This has coincided with Margery having floated the idea of a feature on ‘The Making of the Downton Garden’ at The First Gallery. The Head Gardener would also like an album telling the story. I therefore made a start on one today. The subject is The Rose Garden, which is entirely our own creation.

The earlier pictures have appeared on previous posts, But I have decided to repeat them here. Links to those previous posts are given in brackets, should anyone wish to read the text that goes with them. 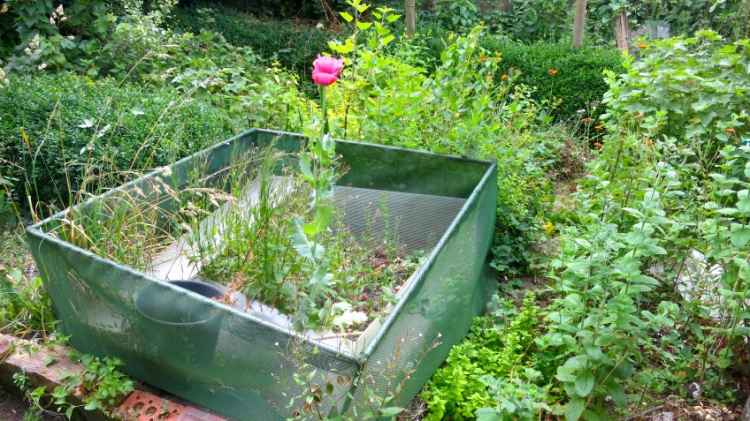 We begin with a view looking towards the south eastern corner of what was then the derelict kitchen garden. The left hand fence is covered with ancient clematis Montanas and thick-stemmed brambles. To our left, another particularly unhappy clematis struggles against the odds. Various box hedges struggle in very thin soil. A frame of some sort lies in the centre. (Not Fit For Purpose 26.6.14)

The Montanas on the left hand fence were held in place by a thick wire mesh nailed into our neighbour’s fence. Removing the mess was a lengthy and difficult process. (Escape From Alcatraz 5.7.14) 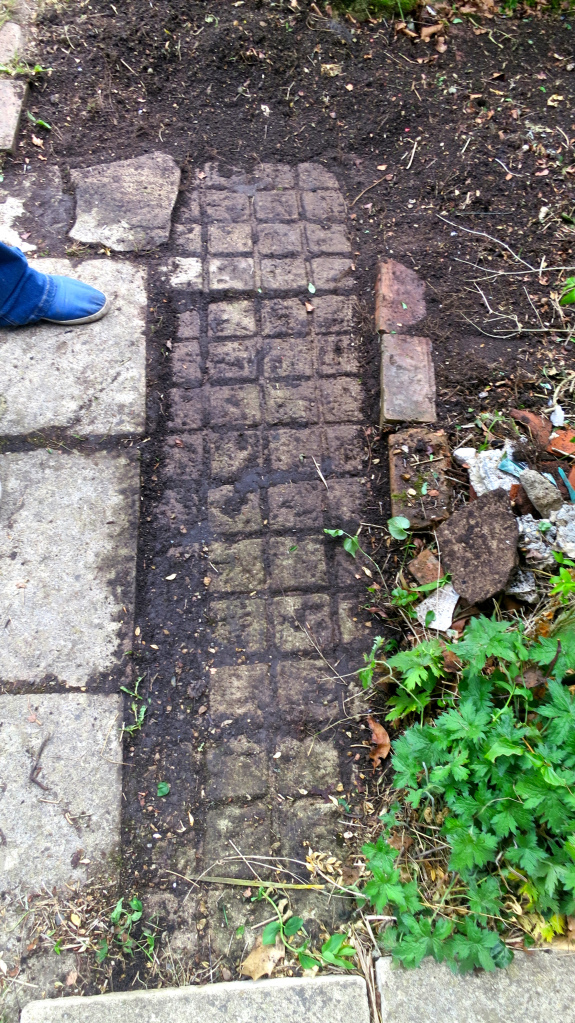 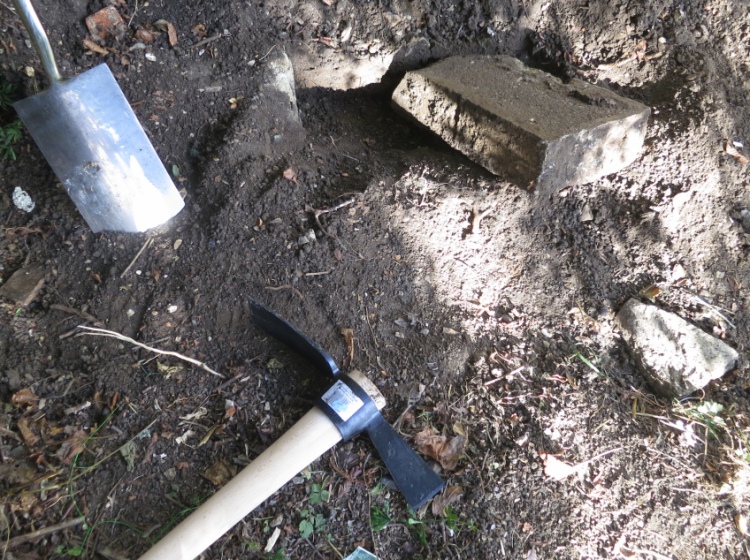 Not very far below the surface of the soil were the remains of concrete paths that I chose to unearth. That was the very least of that particular problem. Throughout the area large concrete blocks were interred underground. Many of these were placed vertically and were very difficult to extract. (Jack Russell 23.8.14) 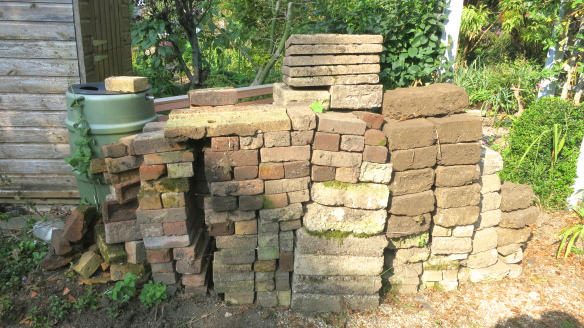 There were also many buried bricks. All these materials were piled up in an ever-increasing heap. (A Deterrent 8.9.14) and The Bhagavad Gita 9.9.14)

By the time Aaron came on the scene, I had removed most of the greenery. He levelled the soil (Communing With Ponies 8.2.15) in preparation for the 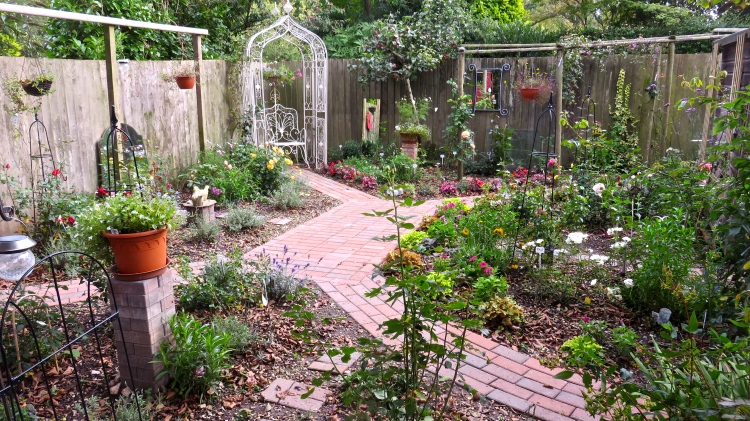 garden we see today. Water butt and brick pile have been removed. Aaron has laid the paving. Various items of furniture have been added. And, of course, a few plants. 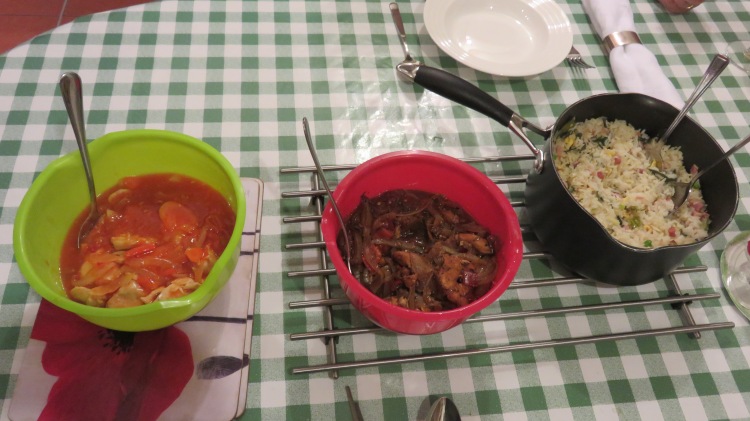 This evening Jackie produced impressive sweet and sour chicken, chicken in black bean sauce and savoury rice with pork for our dinner. Chocolate ice cream was to follow. She drank Hoegaarden and I finished the Pedro Jimenez

33 thoughts on “Before And After: The Rose Garden”