It was June 2014 by the time we began to tackle the southern end of the garden between what is now the rose garden and the back drive. We began with the Oval Path and made a start on Elizabeth’s bed.

This is what confronted us on 5th June. We thought there must be a path in there somewhere. We did not know then that these were two parts of an oval around a bed, beyond which the strip along the fence was a jungle, overlooked by the rose Altissimo which managed to soar above it.

Later in the day, all was becoming clearer.

This broad view from the next day shows how this corner of the garden fitted together. The rose garden hadn’t even been thought of then. The Oval Path is to the right.

The bamboo seen in the third picture above sent roots right under the gravelled path. I had fun digging them out. 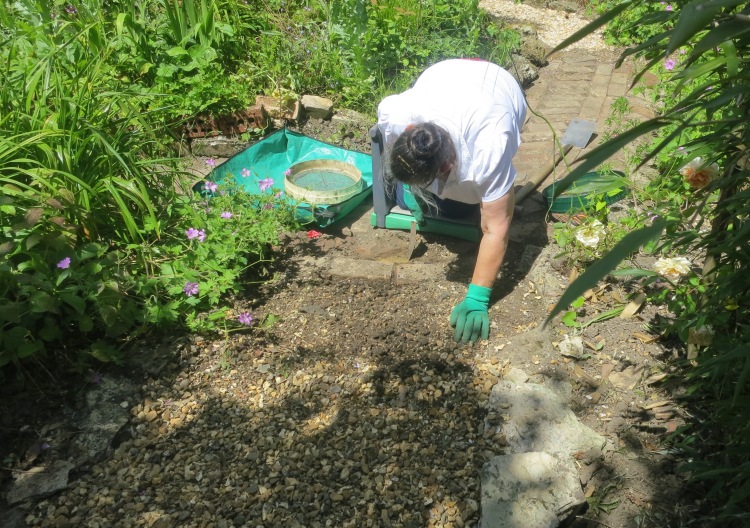 By 10th Jackie was sieving soil from the gravel that we had weeded. 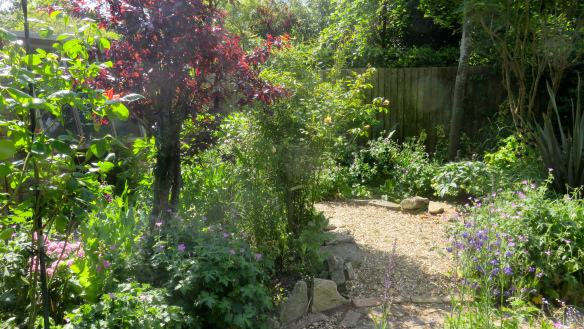 The Oval Bed was better established by 11th June 2015, and Elizabeth’s bed, named because she cleared much of it, was far more inviting.

Altissimo could now be reached.

By 25th September 2015, Elizabeth’s bed had been fully planted up ready for next year. It is now difficult to imagine how obscured that fence was.

Today was another wet, but very warm day. Between steady bouts of rain, Jackie continue to cram as many plants into the front garden as she could. I’m pretty sure I give the entries into the garden album, on which I continued to work today, more breathing space.

We dined this evening on juicy belly of pork. mashed potato and swede, crisp cabbage and tricolour carrots (orange, red, and white); followed by apple crumble and custard. I finished the beaujolais. Jackie had drunk her Hoegaarden whilst cooking, but she didn’t mind.

As I write this post I flip flies from my face and hands. Surely they should all be dead by now.

37 thoughts on “Before And After: The Oval Path And Elizabeth’s Bed”