Two days ago I mentioned that our reception at The Fishers Pond had been so insulting that we left without a meal. A rather more generous complaint than mine would have been is detailed here in a copy of my sister Elizabeth’s e-mail received today:

‘After a recent visit when I was so well received and looked after by  the staff team and enjoyed a really delightful meal I was eager to introduce my brother and his partner to what I had hoped would be another lovely evening and a new venue for them to try.
Unfortunately I was really shocked by the contrasting experience at reception. I had rung ahead and was told that a table would be made up for us right away and 20 minutes later we arrived at the venue. We waited a very considerable time at the reception area and eventually my brother’s partner walked around to the seating area and raised a menu to draw attention of the waitresses who on seeing her turned away ignoring her.
After some considerable time the member of reception staff arrived and when I gave my name and said that I had a table reserved, he abruptly said that we were early and we would have to wait for a table to be made up. I replied that we were not early and at the same time two other people arrived saying that they had a table booked. Without responding to me, or any other acknowledgement  he spoke with the new arrivals, rudely speaking right across our little group and took the couple to their table leaving us standing open mouthed in surprise..
I am afraid this rudeness after already having been kept standing for some considerable time at the greeting area was too much for my guests and we therefore left without having a meal.
Even if there had been a delay in making up our table there were plenty of empty tables and at the very least we could have been appropriately greeted and offered somewhere to sit and wait.
Thank you for taking the time to read this complaint.’
This morning, we noticed a greenfinch pair pecking prize primulas in the front garden. Faster than it is possible to repeat that, The Head Gardener was out there investigating. She found that

the plants had been decapitated. Naturally she found a use for them.

Aaron almost finished weeding the brick paths, while Jackie continued clearing and planting the borders of the back drive. We are really quite ahead of spring this year. 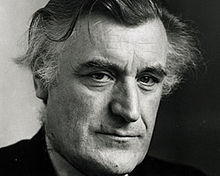 This afternoon I finished reading Lupercal, being the second collection of the poems of Ted Hughes (1930-1998), one of our greatest modern poets, who served as Poet Laureate from 1984 until his death.
The poems are mainly about the animal life he would have known in his native Yorkshire. His muscular language and powerful imagery, presented with supreme poetic skill, depicts the violence of nature, shrieking of the harsh landscape with which he would have been familiar. Just as he would have wrested his verbal sculpture from the world about him, we must wrestle with it fully to understand his work. I can’t say I totally succeeded, but I responded viscerally to the experience.
The final offering is Lupercalia.
Wikipedia tells us that ‘The Lupercalia festival was partly in honor of Lupa, the she-wolf who suckled the infant orphans, Romulus and Remus, the founders of Rome, explaining the name of the festival, Lupercalia, or “Wolf Festival.” The festival was celebrated near the cave of Lupercal on the Palatine Hill (the central hill where Rome was traditionally founded[8]), to expiate and purify new life in the Spring. A known Lupercalia festival of 44 BC attests to the continuity of the festival but the Lupercal cave may have fallen into disrepair, and was later rebuilt by Augustus. It has been tentatively identified with a cavern discovered in 2007, 50 feet (15 m) below the remains of Augustus’ palace.’
This evening we dined at Dynasty in Brockenhurst. The food and service was, as usual, top quality. My main course was chicken chilli garlic, and Jackie’s was chicken tawa. We shared special fried rice, an onion bhaji, and an egg paratha; and both drank Kingfisher.