This afternoon, I finished reading Jonathan Dimbleby’s excellent history, ‘The Battle of The Atlantic’, the story of a series of ocean conflicts that occupied the best part of the Second World War. Having been born in 1942, I unwittingly, along with the rest of us at home, bore the consequences of the shortages of basic living requirements for a good decade after Victory in Europe Day three years later. But I kept my life. Unlike those many thousands of sailors of the Royal Navy and the Merchant Marine; not forgetting the German crewmen, who died such terrible deaths in the struggles to supply the Allies.

Dimbleby has written a thoroughly engaging book detailing not only the political and strategic decisions of the combatants, but also the horrors of the battles, and the effects on the lives of civilians ashore.

The author’s concentration on the conditions endured by both the merchant seamen and the enlisted crew-members brings home to the reader the horrific nature of those years at sea. His description of the consequences of the severe weather on navigation and the impossibility of prolonged survival in the water makes the scenes in and around the lifeboats in the film ‘Titanic’ seem like coping with a capsized pleasure craft in a municipal boating lake. It had, for example, never occurred to me that the vessels on the Arctic convoys could become so iced up that the weight of the frozen water on deck would be capable of sinking a ship.

Sam, after his solo Atlantic row, told us how the waves could toss his little boat considerable distances through the air. Dimbleby describes much larger vessels being given similar treatment. 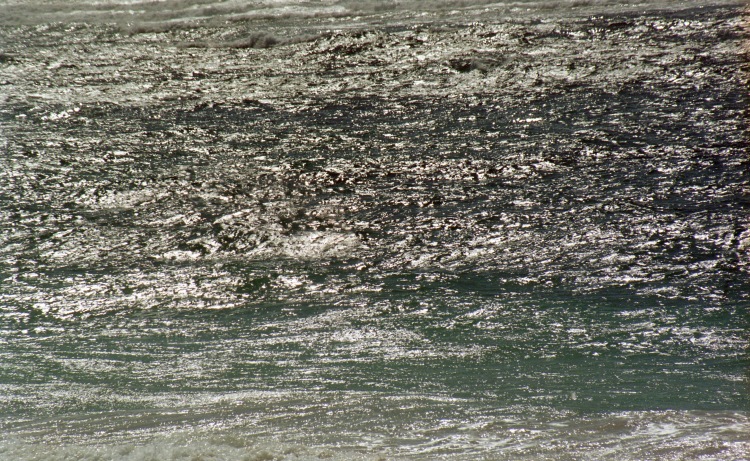 Since the last few negatives of our March 2004 visit to Barbados are of the Atlantic’s multicoloured waves, albeit in the shelter of the Barbados shore, it seemed appropriate for me to scan them for today’s illustrations.

53 thoughts on “The Battle Of The Atlantic”