AS ALWAYS, CLICKING ON AN IMAGE, REPEATED IF NECESSARY, WILL ENLARGE IT

The kitchen door was open this morning as I wandered into it. Such was the heady blend of sweet scents that pervaded the room, that I looked around for the bouquets of blooms I felt sure The Head Gardener must have gathered. There were none. The aroma emanated from the garden itself on this much warmer day. This became apparent as I investigated.

Testament to Jackie’s occasional breaks, gardening magazines like this one on the Heligan Path bench, are likely to be found in sunshine or shade, depending on her needs at the time. In the right foreground of this picture, on a dry brick plinth stands one of the recently purchased half-dozen stone urns, planted with geraniums, petunias, and, yet to burst forth, begonias. Heucheras, hellebores honesty and hebes fill the near beds, whilst in the background the palm which gives its name to the recently refurbished plot, is budding, which it didn’t do last year. An ornamental grass bends at the feet of the weeping birch, now sporting catkins. There will probably be no more long shots of the garden that do not contain an owl.

Later, with the bench in shade, I shifted my viewpoint in order to show the scene through what will soon be a cascade of clematis Montana seen, already covering the other side of the dead tree at top right, that will cover the plank of wood used to form the arch. Jackie enjoys a rest.

This evening we attended a quiz night at Helen and Bill’s church hall in aid of CAFOD. Everyone had brought  contribution of finger food and there was a bar where beer, wines, and soft drinks were available, and variously consumed by the assembled company. 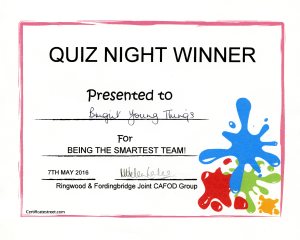 Peter Thomas, a very skilled magician, offering his services free of charge, stepped in at the last minute to manage the quiz, and to entertain us with some marvellous tricks.

Our family members made up two tables; one team consisting of Bill, David and Jen, John, and Rachel; the other of Becky and Ian, Shelly and Ron, and Jackie and me. The first of these groups came second overall, and we won. The winners were each given a certificate to prove it.

This post is for Mary Tang, who likes the panoramic views.

58 thoughts on “One For Mary Tang”