Not only was today wet, but we experienced 40 m.p.h. winds, and it was cold.

The flowers were taking another battering. It was a day for beetles, not for bees.

Thinking that few people would visit the recycling centre today, we transported two bags of green waste there. We were so wrong. The queue was 45 minutes long. Still, we got rid of our clippings and came back with one terra cotta and two stone planters.

Here, therefore, is what Paul Clarke terms a rainy day post. I scanned the next batch of my Streets of London series of colour slides from May 2004. 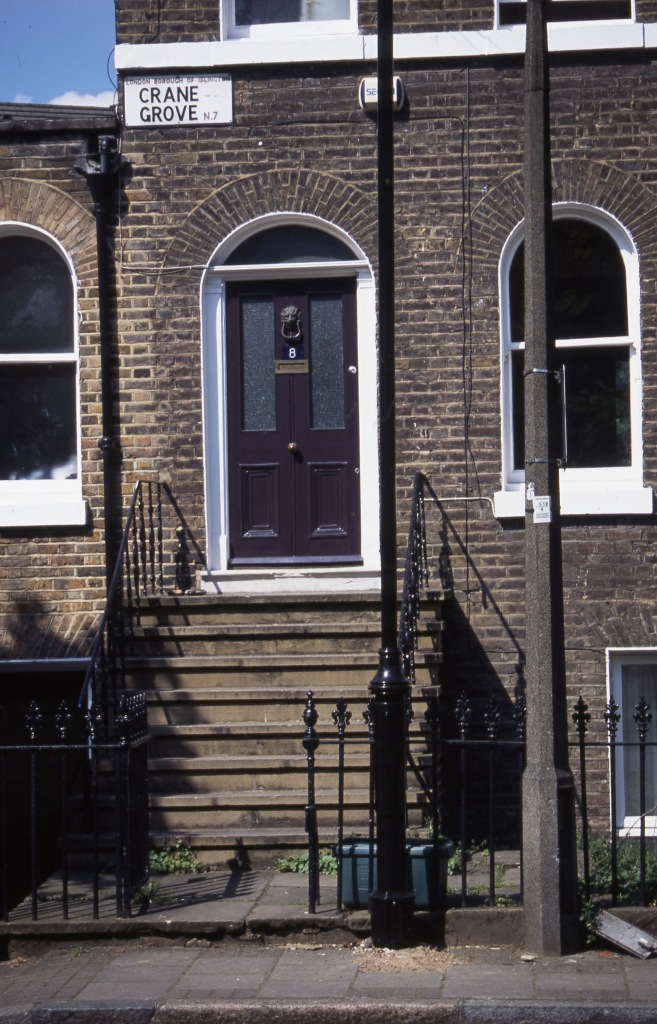 I couldn’t make my mind up about whether this elegant house in Crane Grove N7 is Georgian or Victorian. Neither, it seems, can the Estate Agent who has it on the RightMove website priced at £1,500,000, and described as period. The period of the inside looks to me like last week. 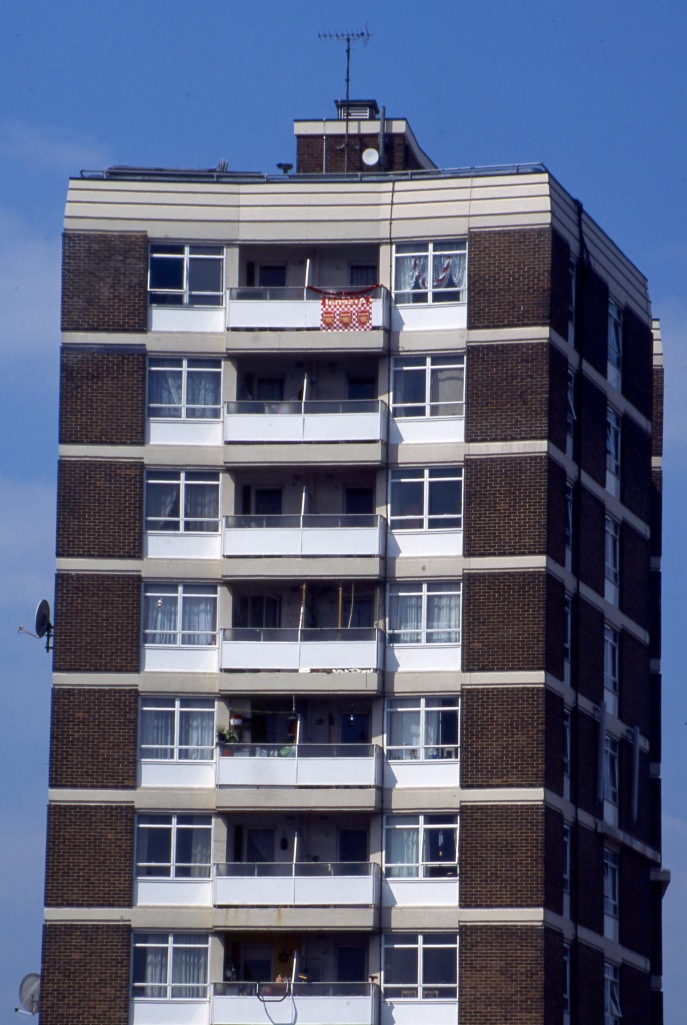 We are told that Highbury Corner is within walking distance of this home. I zoomed in on the block of flats that had attracted my attention because Arsenal’s championship Year was being celebrated on the top floor.

Even nearer is Digswell Street with its gross graffiti. This lies off the Highbury end of Holloway Road, part of the A1 running North from Highbury Corner. It may, of course, have been cleaned up by now. 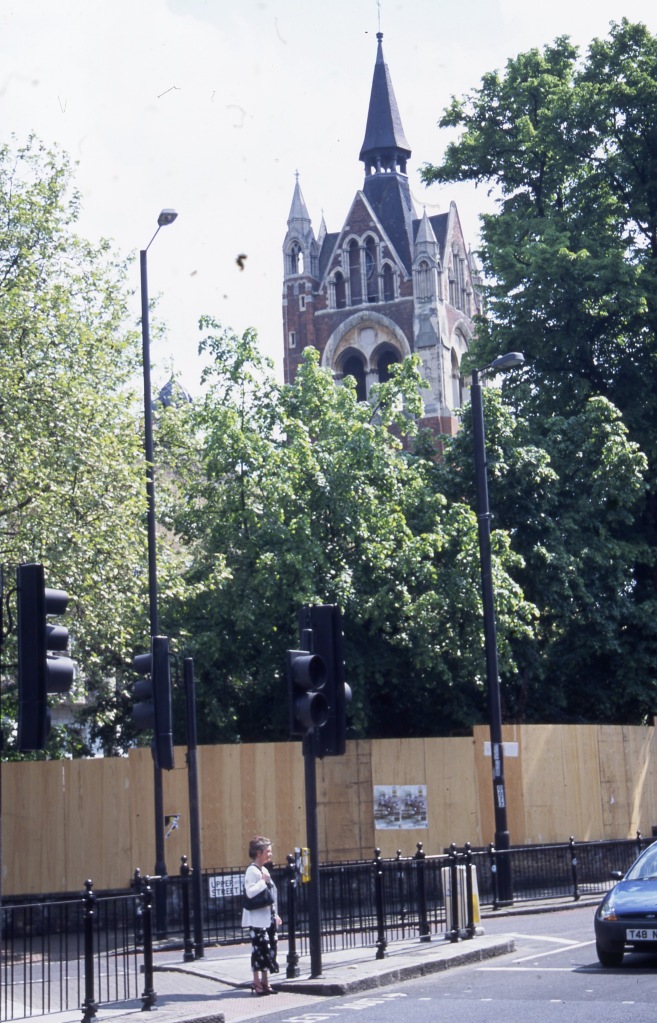 Upper Street is a continuation of this major thoroughfare running South.

From Islington we move back to West London in the form of Clifton Gardens W9, in Little Venice, which, I think, was being graced with new street lighting. That is a pretty mature plane tree in the front garden of the building behind the wall. 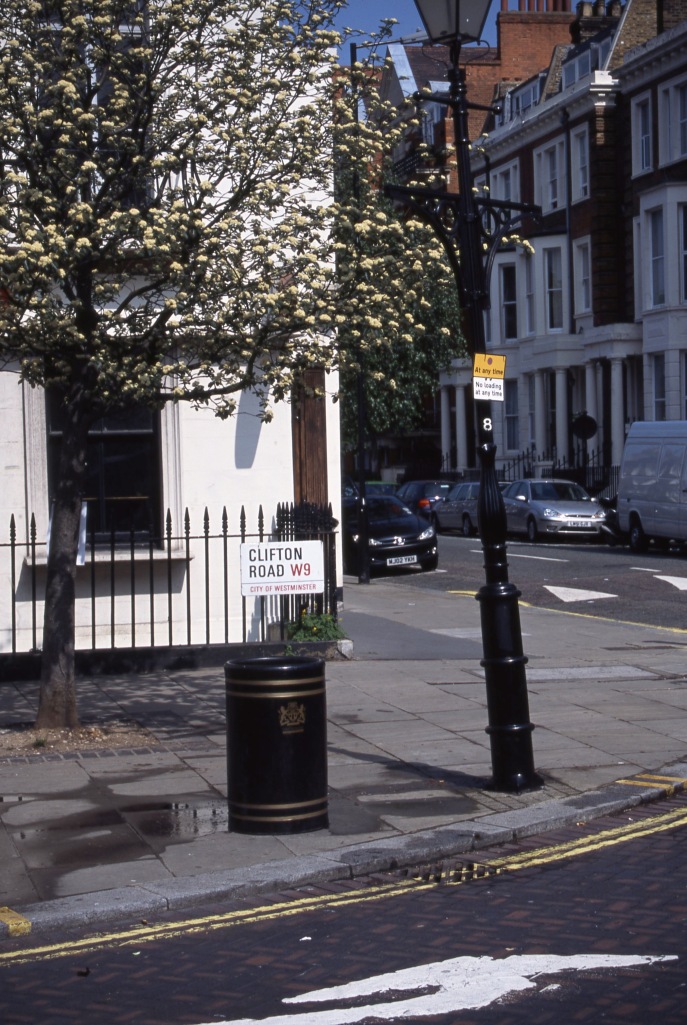 In a basement at that corner Clifton’s restaurant struggled to survive in the 1990s, eventually making way for an Indian restaurant which didn’t last very long. Well, it wouldn’t, being diagonally across the road from the Akash.

I was an occasional visitor to this rather good subterranean eating place with normally excellent wines. John, the proprietor, was keen on the Daily Telegraph cryptic crossword. On learning of my sideline in such puzzles, he would sometimes seek my assistance.

This was in the time when people still smoked in restaurants. I smoked a pipe, but never in a restaurant. John had a ceiling extractor fan which he insisted had been installed for me to smoke my pipe. I did, occasionally when, as often, there were no other customers. The proprietor was prone to relate that Ringo Starr brought his family there on Sundays.

Observant readers will have noticed, the ‘normally’ in the description of the wines. The reason for this is that this is so far the only place where I had had to return a corked bottle. Poor John had to agree, and was rather upset at having served it.

On one memorable occasion a young gentleman behind me was introducing his lady companion to the joys of the spaghetti Westerns of Sergio Leone. This was the trio of low budget films bringing Clint Eastwood to fame as ‘The Man with no Name’. It just happened that I was a fan, and have been known to join in other people’s conversations. I couldn’t resist it. I just had to turn, politely ask if I could add my two pennyworth, and upon being welcomed, observe: ‘Forget Clint Eastwood. Lee Van Cleef is the man’. This made my interlocutor’s day. He agreed entirely. I hopefully thought that with any luck the young woman was amused. I was being rather tongue in cheek of course, but Van Cleef had the looks for the part.

On the opposite corner of Maida Vale, with Hall Road, stands one of the luxurious apartment blocks that line this part of the A5. 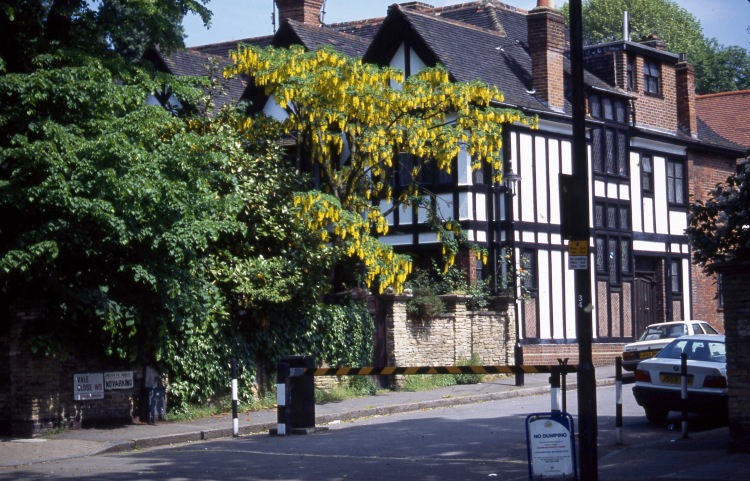 Vale Close, just North of this point, is a small private road. Who would place this within a mile of Marble Arch?

For dinner this evening, Jackie produced a wholesome heart casserole, with crunchy carrots, new potatoes and green beans, followed by scones. These latter were eaten like those in traditional West Country cream teas, that is, with clotted cream and strawberry jam. This gave us a problem. These cream teas are native to both Dorset and Devon. The trouble is in one county you put the cream on first, and in the other, the jam. We couldn’t remember which was which, but we did think we might Google it and follow the practice of the county which had supplied our West Country Clotted Cream.

The address of the distributor was in East Kilbride in Scotland.

I put my cream on first. I don’t know which way the Culinary Queen voted.

Jackie drank Hoegaarden and I finished the Carles.