Richard, from Kitchen Makers, visited this afternoon to assess measurements and requirements for our new kitchen, to be installed in January.

I went off to London – virtually, in the form of scanning another dozen Streets of London Colour Slides. These are from May 2005.

The shopping trolley on this corner of Marylebone Road probably contains items collected by someone hopeful of recycling them, possibly in exchange for cash. Barrie Haynes, in his comment below has noted that ‘ The red bus (Merc ‘Bendibus’) is probably one of a large batch now working in Malta.

During this time I made regular annual visits to my accountant in Hatton Garden. This is how I came to find the Bleeding Heart Tavern and Dining Rooms. Described on its website as a ‘long–established and extremely popular French Restaurant [which] offers superb food in historical surroundings within the centre of London. It takes its name from the yard where it is located which, according to the history books, was named after a 17th century beauty, Lady Elizabeth Hatton, who was found murdered there. The warm, wood-panelled Restaurant is an ideal venue for both an important business lunch (customers cross the City of London for its famed Cheeseboard) and for a romantic ‘diner a deux’ – it was voted by ‘The Times’ as the most romantic restaurant in London.’ The food was certainly excellent, but my memory is of a very cramped ambience. The current photographs look rather less so.

I would walk up Greville Street to Leather Lane, with its market stalls, like this one on the corner of Portpool Lane; 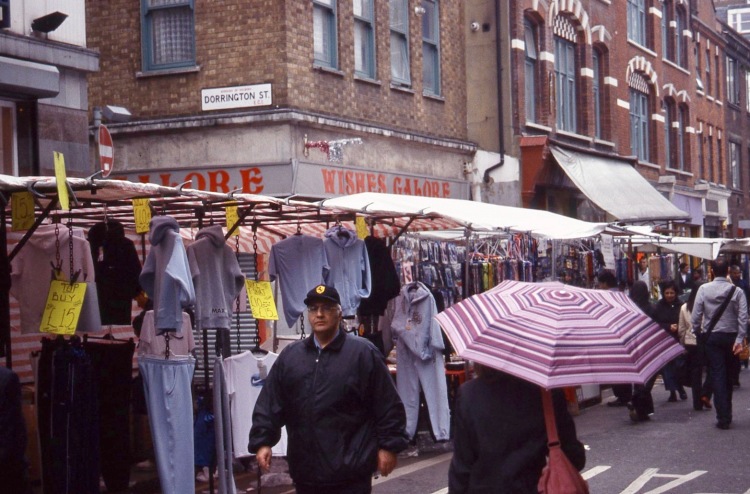 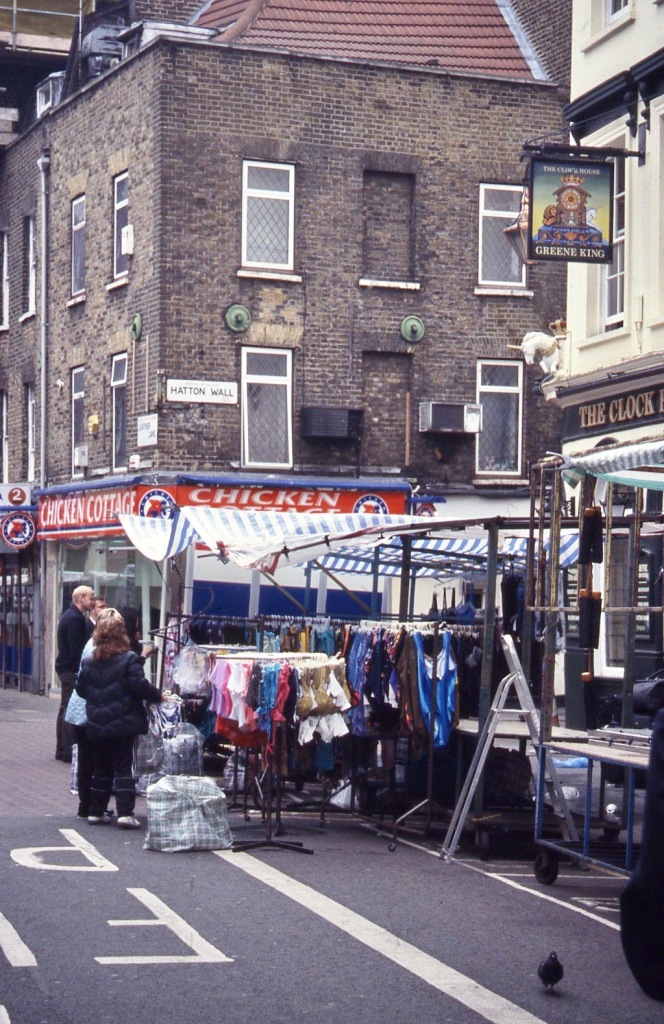 The Clock House pub has been renamed, refurbished, and re-marketed as 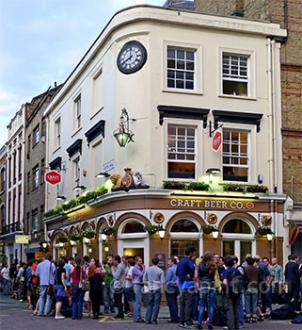 The Craft Beer Co. Apparently those original features that could be retained were saved in the new scheme of things; the company specialises in ‘craft ales’. One reviewer had this to say soon after the reopening in 2011: ‘Well, it’s still the first flush of opening, but signs are good for real ale lovers. The old Clock House has been done up, but they’ve kept what original features they could. Boasting 37 taps and 150 different bottled beers, it’s been pretty busy on our visits (opening night was absolutely rammed, so we went elsewhere, but we’ve been back a few times since), however, the staff are pretty well trained to spot thirsty punters patiently waiting. And they’ve taken the decision to serve the stronger beers in half-pint glasses, although the prices are comparable to a pint. You may think around £4 for a half is expensive, but when you’re getting a beer that’s 10% ABV, it’s hard to argue. Prices are high overall, but we can’t say we’re surprised. The main room was pretty busy and, as it was a nice evening, a good portion of the clientele had spilled out onto the pavement. The upstairs room was quieter, if somewhat overshadowed by the large photo-mural on one wall which we mistook for The Edge (from U2) until we noticed he was filling beer kegs. There’s no menu, just ‘high quality bar snacks’ including handmade scotch eggs and enticing pork pies.’

St Cross Street must be around there somewhere.

Moving back to WC1 we find the Transport & General Workers Union Central Office. Formed in 1922 the T & G was merged in 2007 with Amicus, forming the trade union Unite.

Paddington Station originally served the Great Western Railway (GWR), which, Barrie tells us, ‘ceased to be on Nationlisation in 1948.‘ London Street W2, runs alongside its office buildings. 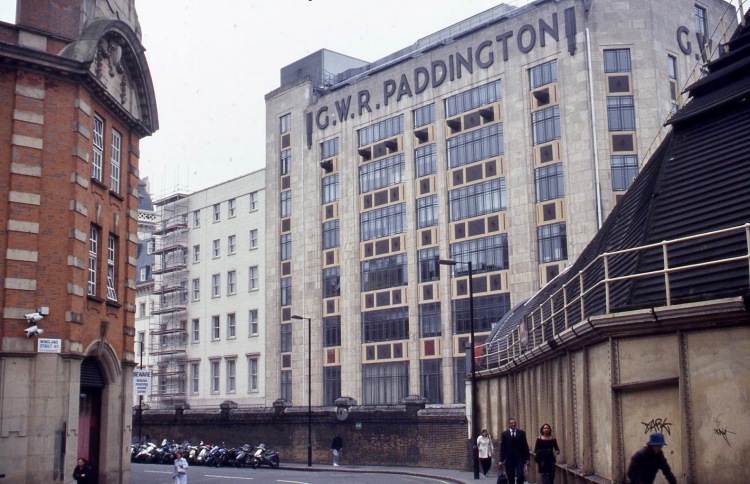 In 2005 the Royal Mail Central London sorting office was still housed in the red brick building on the corner of Winsland Street, stretching further on down London Street. According to The Guardian newspaper the asset was sold to a Singaporean consortium in 2014 for £111,000,000. 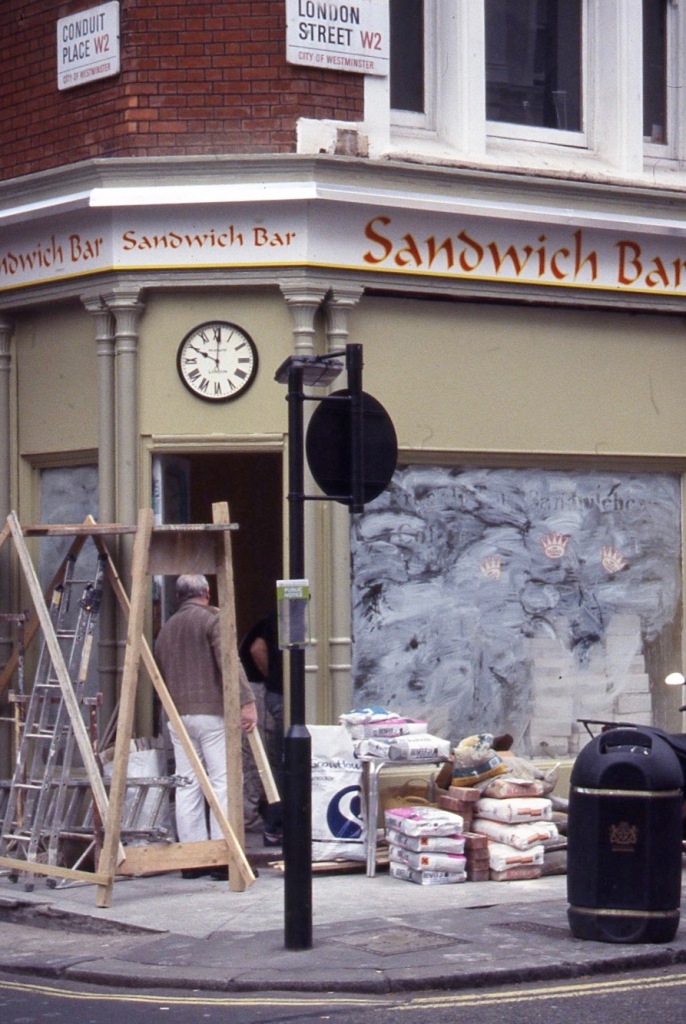 If the food in this sandwich bar on the corner of Conduit Place matches the outlet’s facelift, it might be quite tasty. 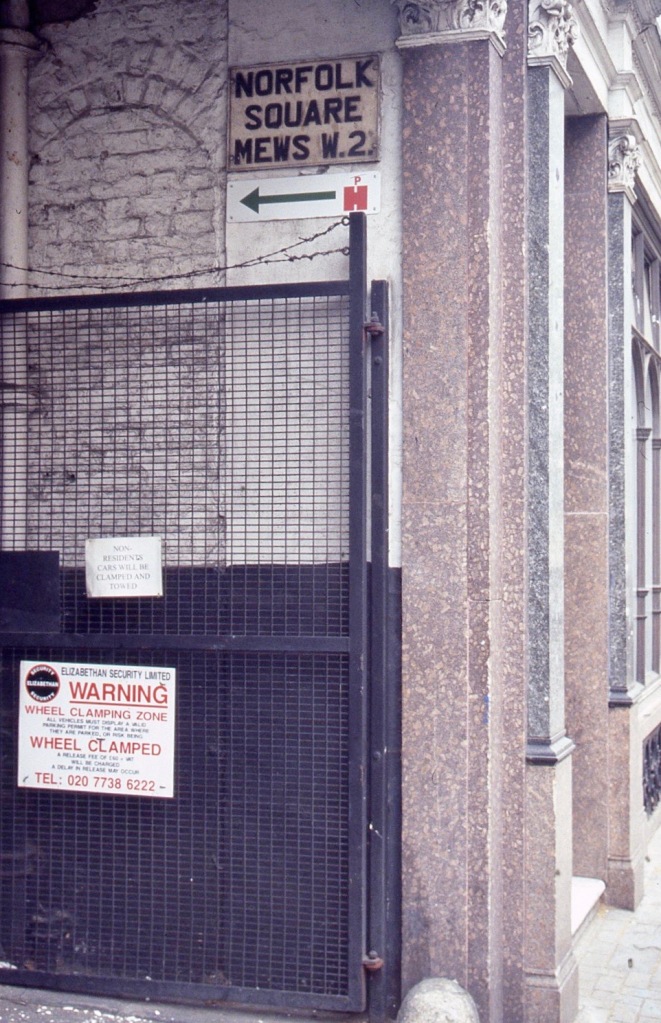 It is not recommended that you risk parking your car in Norfolk Square Mews.

The number of changes of use and of ownership featured here bear out the words of Heraclitus featured in ‘All Is Flux, Nothing Stays Still’.

I printed a couple of photographs of Lymington High Street I had taken a few weeks ago, in which Raul, a waiter at Lal Quilla, had appeared. As we were dining there this evening I took them to him. Raj, the manager, asked me for some pictures he could frame and put on the restaurant wall. I will be happy to raid my archives for something suitable.

My choice of main meal was lamb Ceylon; Jackie’s was chicken sag; we shared special fried rice and an egg paratha, and both drank Kingfisher.