Our Ace Reclaim arch in the corner of the Rose Garden has not survived the storms. Already rusting and having lost one of its important bars it was probably only being held together by the roses it was there to support. 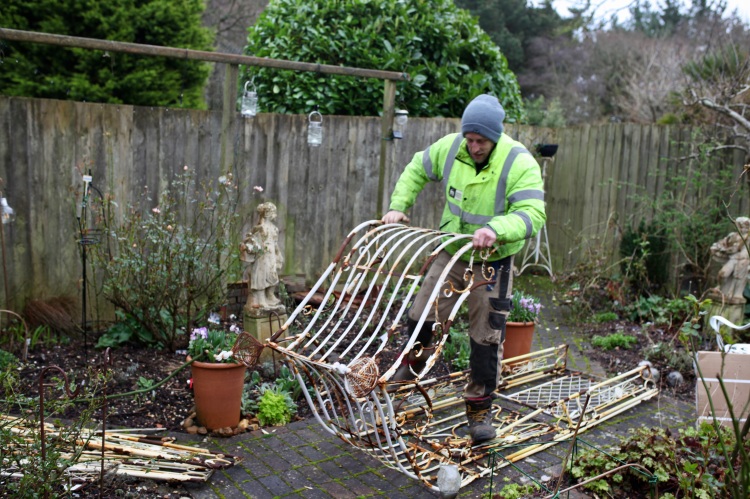 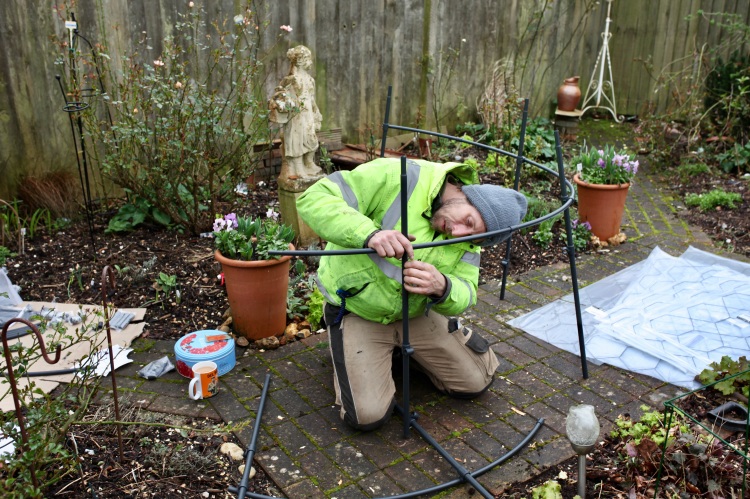 Now, longer term readers may remember our struggle with The Agriframes Arch which had driven Jackie and me to distraction. Agriframes products are very good; they are resilient, rust resistant, and guaranteed for 15 years.

But – and a very big but – they demand self-assembly – not by the structures themselves, but by the buyers; furthermore their printed directions, termed like many, ‘destructions’ by Aaron are so difficult to follow that it has taken more than five years for us to contemplate buying another product.

This time, we have Aaron of A.P. Maintenance. He is a professional, had already assembled a few flat pack arches for us, and should surely be able to meet the challenge. Not so. His ‘destructions’ were both confusing and confused. He was thrown by the leaflet at one point stating that he should have six particular components for one section. He had only four. Later, the destructive instructions stated four. Some words had been omitted from the text rendering the meaning unintelligible.

A crucial clamp seemed impossible to apply. At one point the section Aaron is seen working on above fell apart and he had to start again.

Have I mentioned that he was beset throughout by light rain and heavy winds?

I thought not. This would never normally stop him working.

Our friend enjoys a challenge but at the end of his allotted time he was back where he started. The ‘destructions’ sheets were sopping wet and so was he. There was no option but to throw in the towel. Next week Aaron will bring a colleague to help.

This experience sent Jackie to research reviews on line. Those on independent sites were almost all negative. One from Facebook is relevant:

‘Three professional landscapers were unable to assemble your Sussex Bower in my clients garden and wasted 2 days trying to to so. They spent many weeks trying to negotiate a refund for this item and you have only agreed to give them a small fraction of the price they paid for it on the basis that it was ‘used’! Your assurances on your website do not bear out and your customer service is very poor.’

This afternoon I watched the ITV broadcast of the Six Nations rugby international between England and Ireland.
This evening we dined on Hordle Chinese Take Away’s excellent fare with which I drank more of the Shiraz, and Jackie didn’t.