I accompanied Jackie on her Ferndene Farm shop trip this morning.

There was no queue for the food shopping, so Jackie did that first before joining 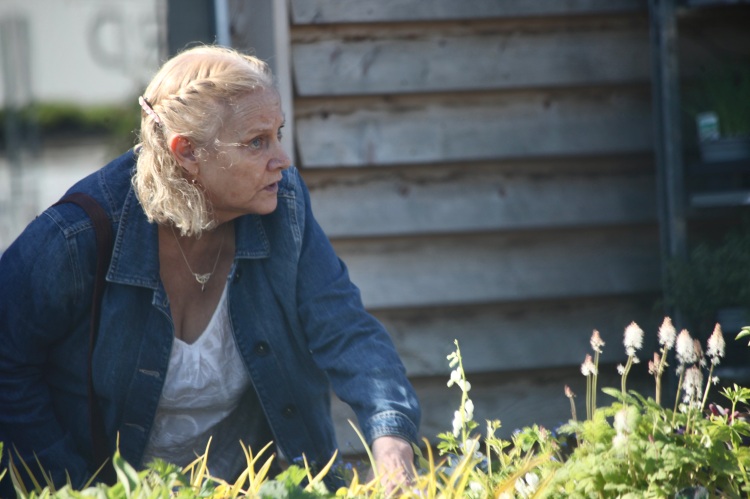 the line of  plant lovers, Masks were more in evidence today. 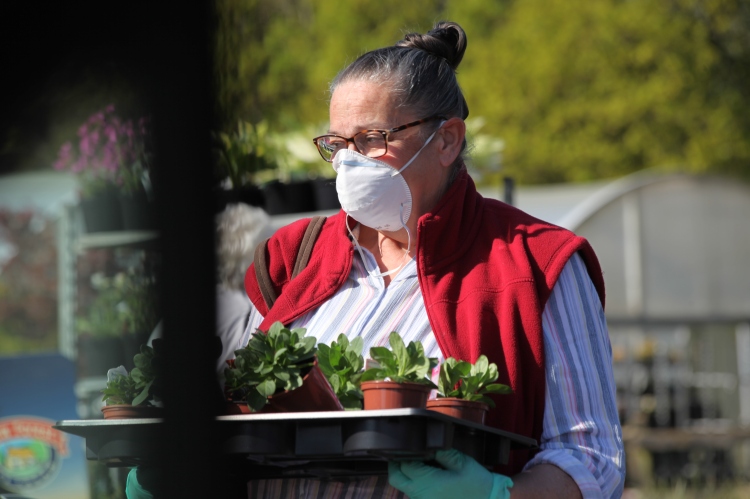 Jackie’s floral purchases were limited because there was only one empty plant tray and the trollies were all in use.

Afterwards we drove on to Tesco to fill up with petrol. There was no queue there either.

Ballards Lake lies alongside Fernhill Road on the outskirts of New Milton. Jackie parked first in Brook Avenue, then in Lake Grove Road while I wandered with my camera. 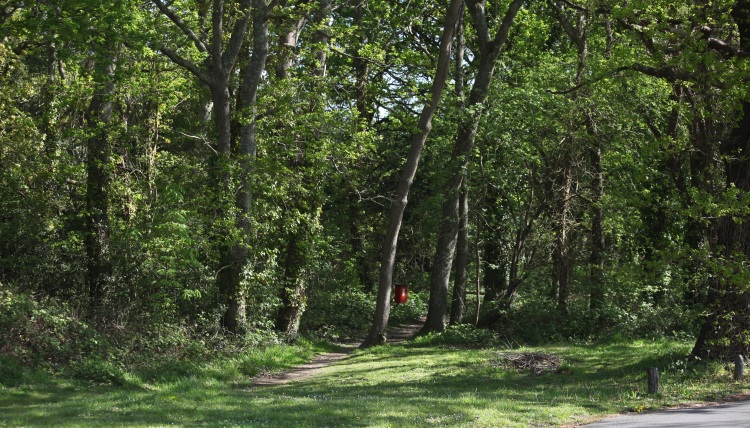 blooming bluebells  enhancing a splendid woodland view from the fronts of their houses.

One woman seemed to be returning home from a walk with her dog.

a shallow stream which 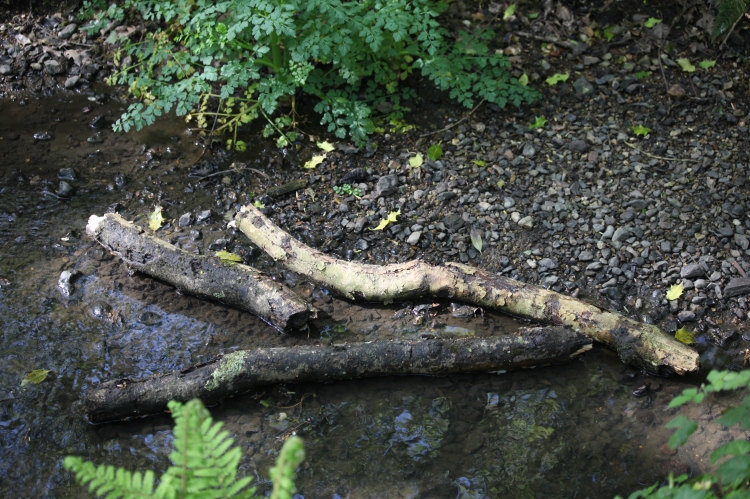 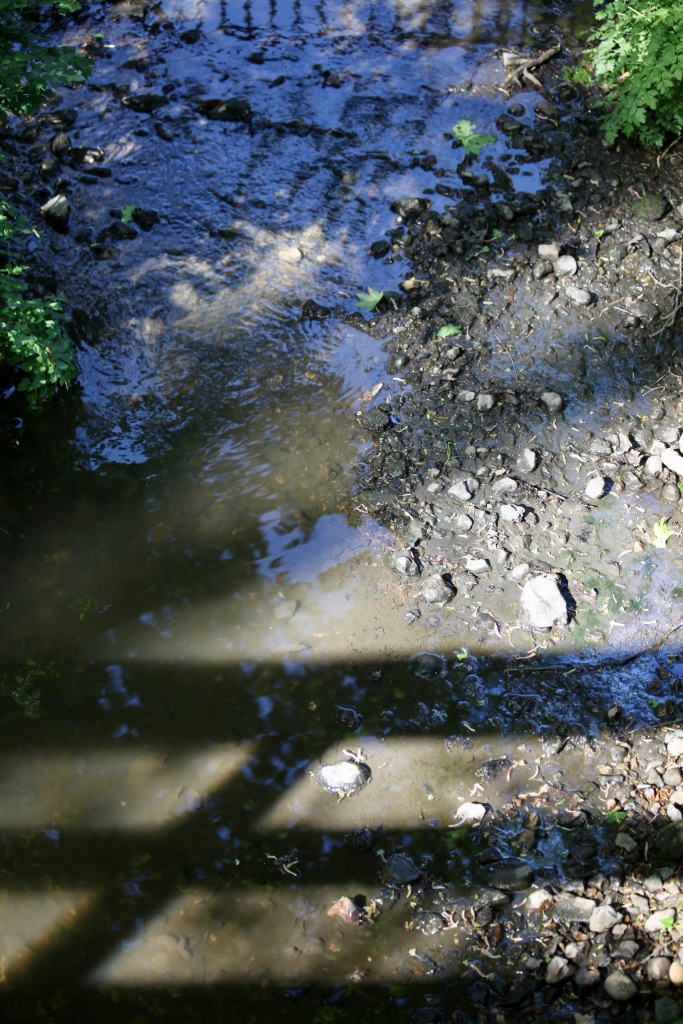 in parts is quite rock dry.

The shadow in this picture is that of another bridge, the crossing of which leads into the 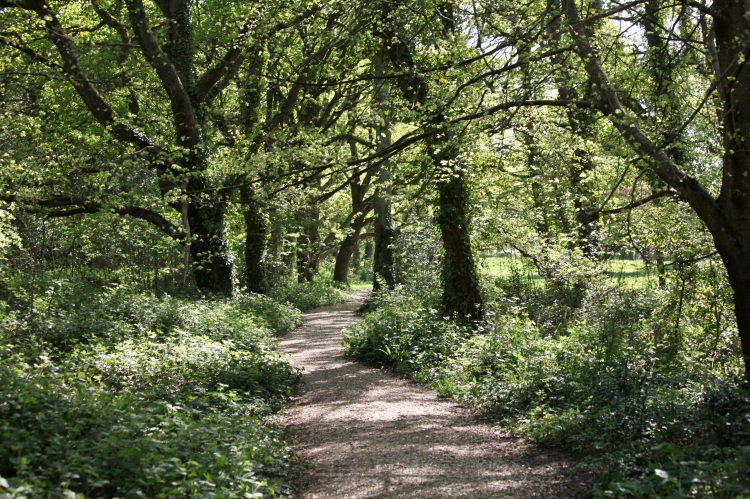 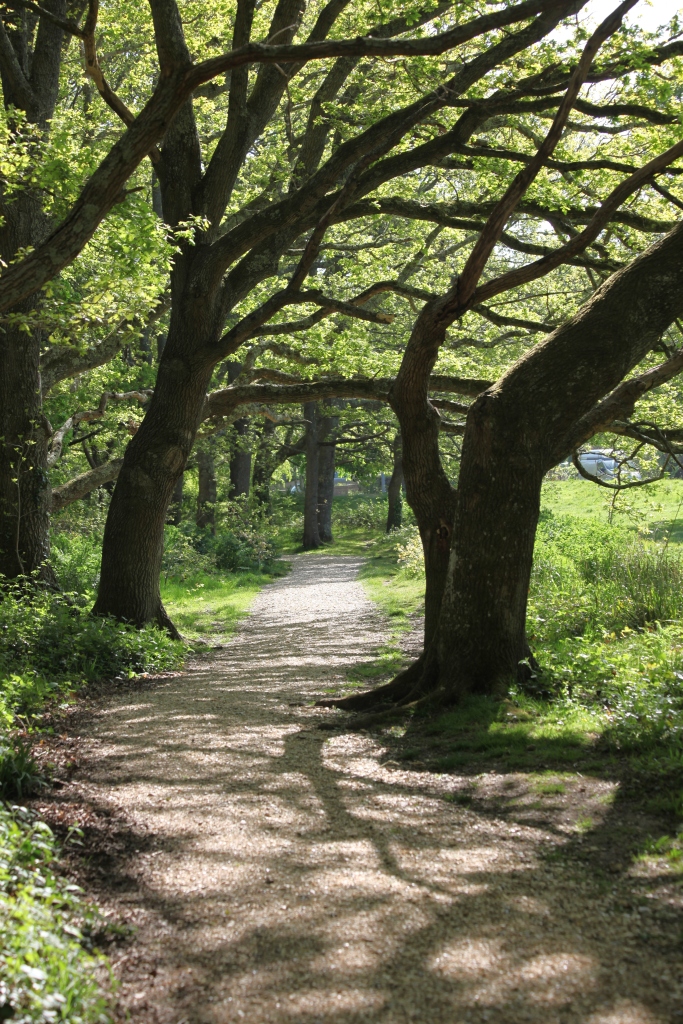 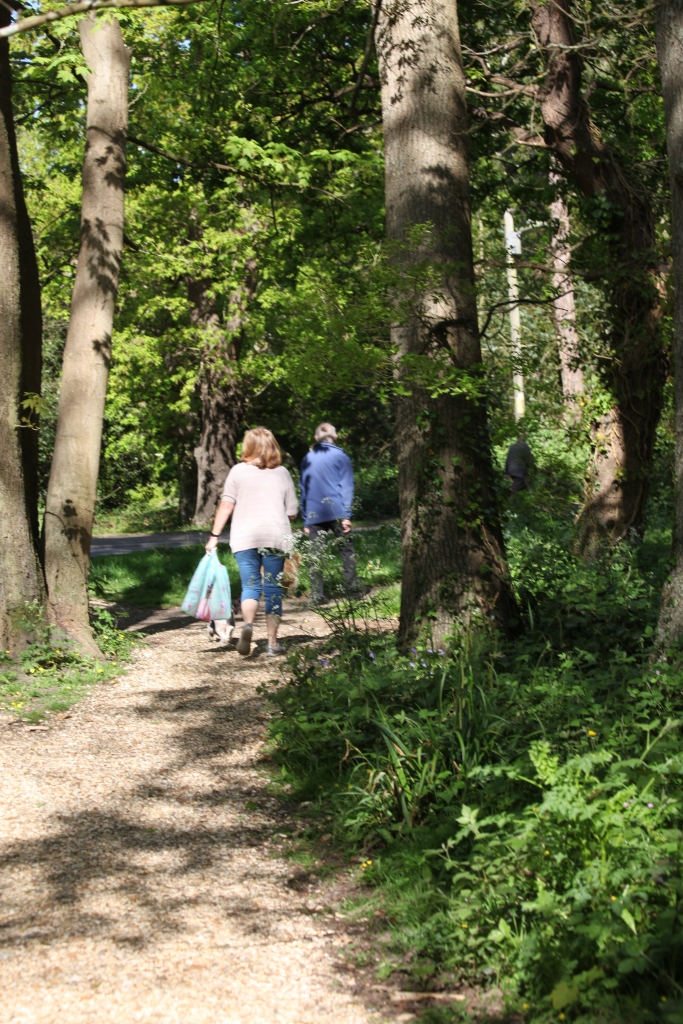 woodland path along which I stood aside for a couple of dog walkers who thanked me for doing so.

The stream featured here is meant to flow under Fernhill Road to link with Ballards Lake. 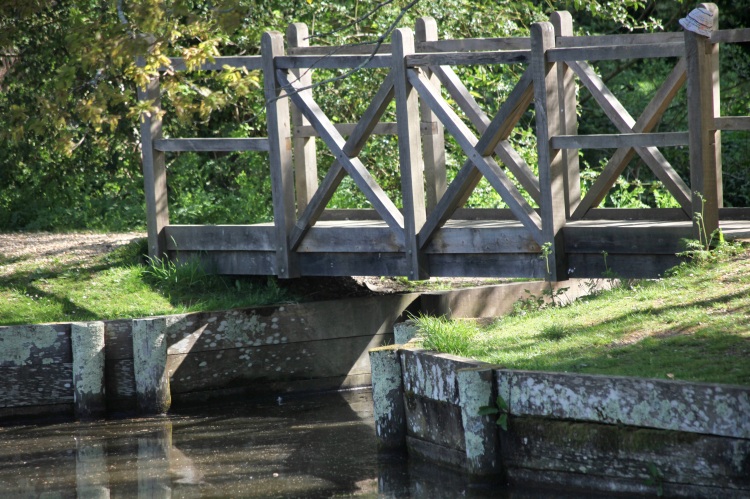 the lakeside bridge, one of which posts sports

I watched a young woman photographing a young child on the far bank. 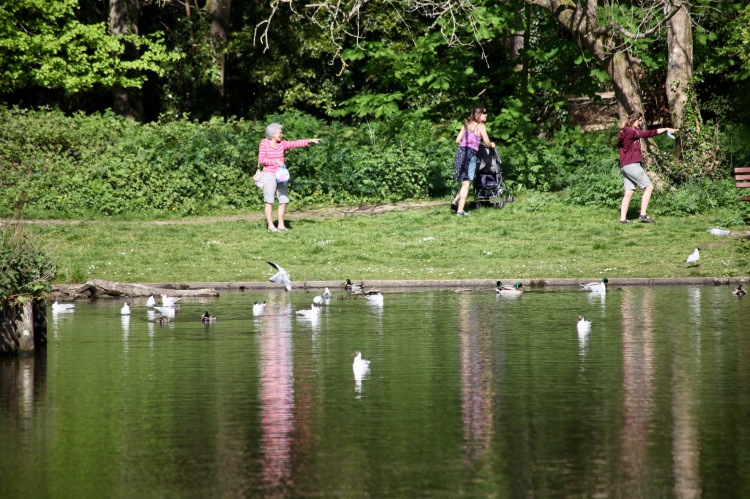 Later her group seemed to have spotted something – perhaps the infant had gone wandering.

The lake’s surface bore a number of reflections.

On my circumperambulation (yes, I have coined this word) I spoke to several people at a safe distance. The couple above welcomed my attention because the gentleman enjoys the same enthusiasm. 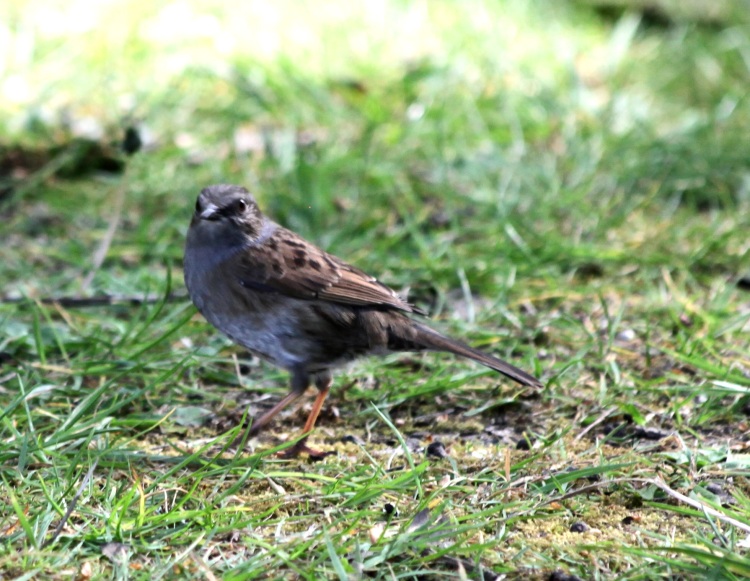 I think this was a friendly thrush that greeted me. I would be grateful for any birder letting me know otherwise. (I am reliably informed by John Knifton that this is a dunnock – thanks a lot, John)

The screeching black headed gulls that dominated the orchestra around the lake seemed not so friendly.

In fact the name of this avian species is quite misleading. Their heads are chocolate brown rather than black, and even then only during the summer when their white pates develop this pigmentation. 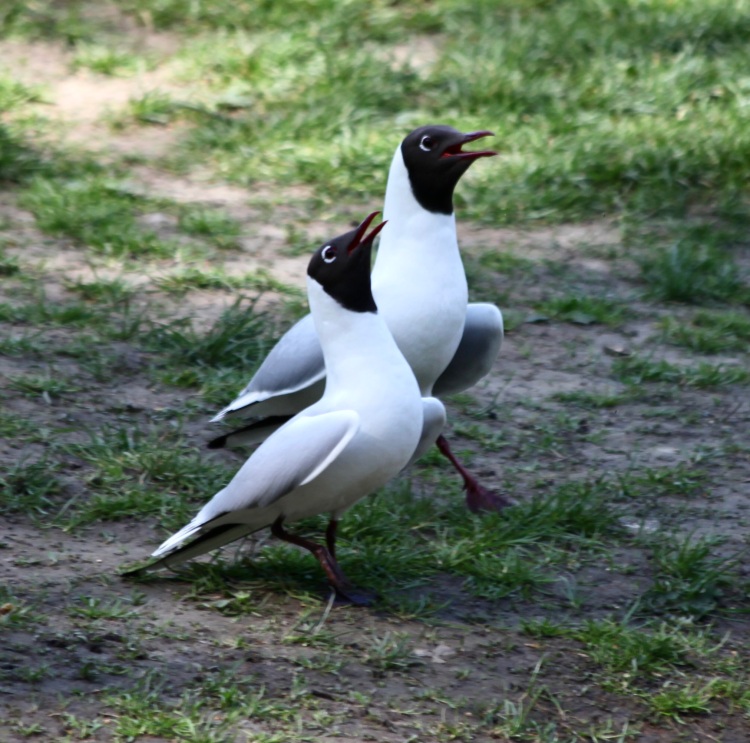 A considerable about of squawking came from their open beaks.

Some adopted the apparently subservient prone shuffle we had seen in our pigeon  day or so ago. Here was another mating ritual.

72 thoughts on “A Mating Ritual”