Having received no response from the estate agent, I decided to print off, sign, and post the document to the French solicitor complete with the errors. There are only so many times I am prepared to point out mistakes. This meant popping over to Shelly and Ron’s for my signature to be witnessed. Ron performed the task; I e-mailed scanned copies of each signed page to the agent; then posted the original to the solicitor.

the //about-france.com website claims that ‘the “Bastide” towns of southwest France are a growing tourist attraction, and comprise one of the largest collections of well-preserved mediaeval townscapes to be found anywhere in Europe.’ In yesterday’s post I featured

Beaumont-du-Perigord, being a fine example.

Unfortunately I cannot be certain which was the next such town I visited with Maggie and Mike in September 2003, but I think it was Monpazier, founded by the English to keep out the French in 1285. It was to change hands between these two nations several times in the following few decades. 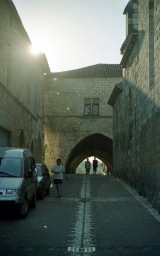 The main feature of a bastide is the central square surrounded by colonnaded arches now housing shops, such as wine merchants and toy suppliers. I enjoyed seeing baskets of diabolos, such as those brought back from holiday by my maternal grandparents. 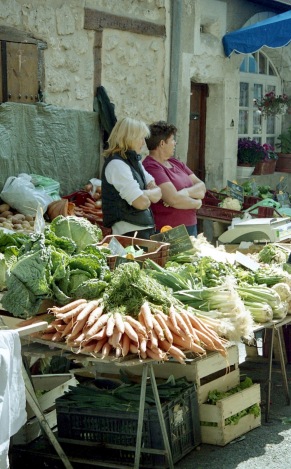 Colourful market stalls fill the square which is

surrounded by grids of streets linked by narrow alleys or ruelles.

When we passed a church which had recently held a wedding, my friends thought it would be a good wheeze to pretend it was theirs.

I drank more of the Malbec with our evening meal consisting of Jackie’s chicken chow mein and Tesco’s won tons. Mrs Knight enjoyed her food , and did not imbibe.