On quite a misty morning, we went out for a drive in such a direction as the spirit moved us.

We crossed the Lymington River and turned right along Undershore Road, giving us an atmospheric view of the level crossing we had just passed over. 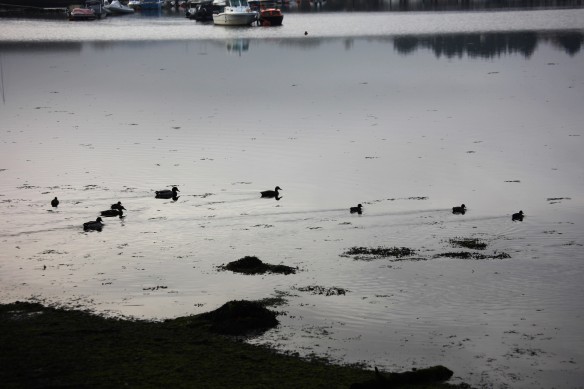 Just to the left of my vantage point, a duck led her paddle of ducklings onto the water from the muddy bank.

Originally heading for Hatchet Pond we diverted to Tanners Lane, along which was walking a blonde woman with her equally  slender and elegant saluki, who were soon to join us on the beach,

where Jackie found the skull of the spirit that had led us there,

and I photographed the sun, the sea, birds overhead, the shingle, the invisible Isle of Wight, a beached boat, and a ferry. 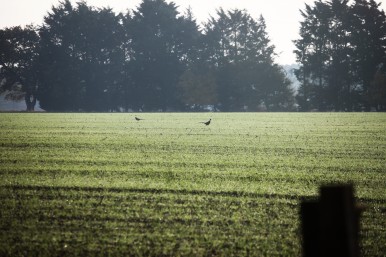 and pheasants sped across a field.

Snooks Lane near Portmore led us back to Lymington and home.

I have not dwelt on my daily continuing wrestling with uploading my pictures. Suffice it to say that James Peacock made another visit, bringing his own Apple laptop to try that. The problems were the same, leading us both to the conclusion that the problem lies in the BT internet connection. James is to investigate the possibility of getting this improved.

This is a well researched and beautifully produced A4 size laminated paperback. In tracing the antecedents of these young men who died in WW1, the conflict that was supposed to end all wars, we learn much about the early European settlement of New Zealand. It was only in 1840 that the first British immigrants came to join the Maoris who had come from Polynesia before the 14th. century.

It was only in 1909 that the New Zealand Army was formed, yet it sent more than its fair share to join the 1914-18 conflict, and to die in foreign fields, and in the New Zealand General Hospital No. 1 in Brockenhurst. Almost as many succumbed to illness as to wounds. A proportion of the men were Maoris.

Those of European origin mostly emanated from parts of the UK, notably Scotland. We learn their civilian occupations, and those of their antecedents. As one would expect there was a preponderance of farmers and craftsmen.

The agonies of the men and of their bereaved families are apparent in their factually related stories.

This evening we dined on Jackie’s delicious liver casserole, served with saute potatoes on a bed of peppers, leaks, garlic, and mushrooms. Dessert was cherry crumble and custard. I drank Abbot Ale. 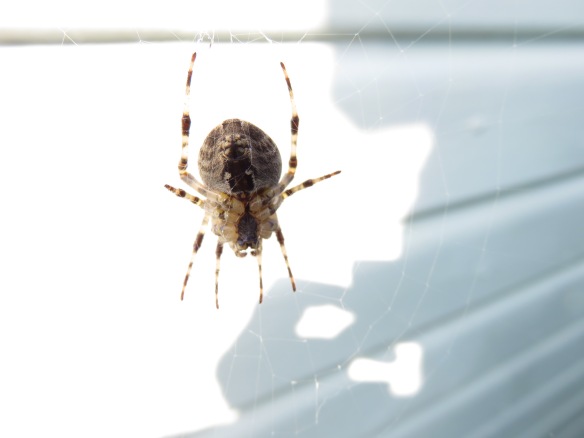 Having spent far too many hours attempting to load today’s photographs onto WordPress, and feeling like the spider of the legend of the Scots king Robert I, I am forced to leave gaps above, which I hope to fill in due course.

explains: “It is said that in the early days of Bruce’s reign he was defeated by the English and driven into exile. He was on the run – a hunted man. He sought refuge in a small dark cave and sat and watched a little spider trying to make a web.

Time and time again the spider would fall and then climb slowly back up to try again.

If at first you don’t succeed – try, try again.

Finally, as the Bruce looked on, the spider managed to stick a strand of silk to the cave wall and began to weave a web. Robert the Bruce was inspired by the spider and went on to defeat the English at the Battle of Bannockburn.

The legend as it is now told was first published by Sir Walter Scott in ‘Tales of a Grandfather’ in 1828, more than 500 years after the Battle of Bannockburn. It is thought that Scott may have adapted a story told about Sir James Douglas.

Caves across Scotland and Ireland are said to be legendary cave of Bruce and the spider: the King’s Cave at Drumadoon on Arran; King Robert the Bruce’s Cave in Kirkpatrick Fleming near Lockerbie; Bruce’s Cave – Uamh-an-Righ, Balquhidder Glen; Bruce’s Cave on Rathlin Island…”

Early the next morning I managed to load the rest of the pictures.