Mike, the Perfect Plastering and Plumbing man who came this morning to replace our leaking outside taps, not only did a very good job with them, but also turned out to be an Apple user, and gave me advice subsequently confirmed by the iMac adviser.

The news about the iPhoto disaster, like the curate’s egg, is good in parts. When the latest edition of the Yosemite operating system was installed, iPhoto was superseded by Photos. I didn’t use that because I was reluctant to change from the application with which I was familiar. However, without my realising it, all my photographic work had been automatically copied into Photos. Thereafter I had happily continued to use iPhoto, but there was no further entry to Photos. That, I should have been doing myself.

There is no way of recovering the deleted iPhoto files. The last images entered into Photos were therefore inserted on the updating day in May this year. All photographic work carried out between then and yesterday has been lost.

Thankfully, everything posted on WordPress remains on the blog, so it could have been worse.

Since the end of July I have been unable to use e-mail on the iMac. Whilst I had Apple Care on the phone, I asked Leonel, the excellent adviser, to sort that out for me. He did.

As so often in September, we are experiencing a late burst of warm and sunny weather, called ‘an Indian summer’.

The benefits are seen in the rose garden,

where New Dawn is now blooming. 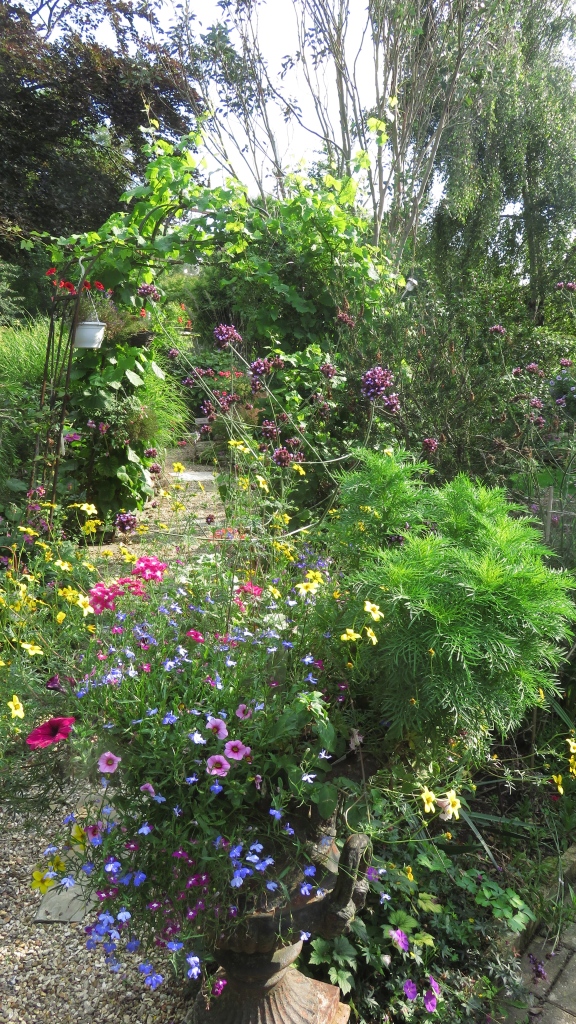 Paths, such as the Pergola one, are still surrounded by lush plants.

A small insect, possibly an ant, clung to tiny bidens.

When I had finished the lengthy phone call I helped Jackie finish bagging up the rubble left over from Aaron’s brickwork, and spreading the last bit of gravel. After lunch we transported the rubble to Efford recycling centre. As I prepared to enter the car, the Head Gardener politely sent me back inside for my wallet. Naturally, she had no wish to visit the municipal dump without investigating the sales area. We came away with two more mirrors, and two more garden chairs.

As usual yesterday’s set meal for three from Hordle Chinese Take Away provided plenty left over for our dinner tonight. Jackie drank Hoegaarden, and I finished the shiraz.

34 thoughts on “A Burst Of Summer”