With the return of the sunshine I carried out a little more tidying in the garden, especially dead-heading of roses, including 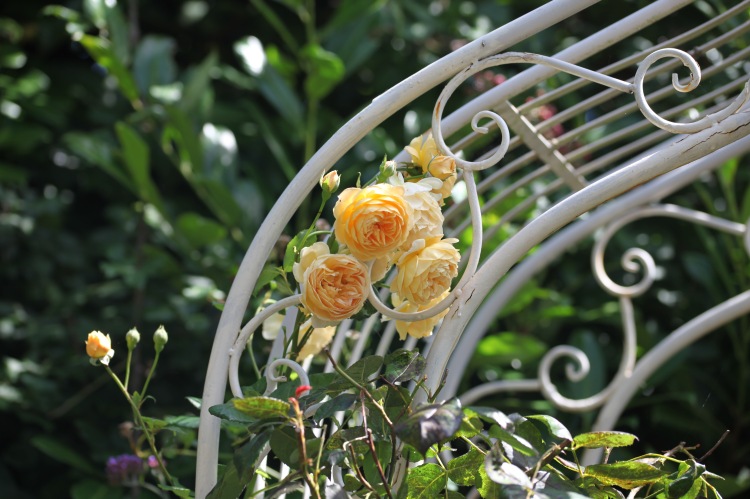 and a pink climber recovered by Elizabeth.

This wisteria occupied the Kitchen Bed when we arrived three years ago. Despite the Head Gardener’s best efforts it has never flowered.

The Chilean lantern bush, on the other hand, is once more producing blooms;

and new shoots are emerging on the pieris on the grass patch.

Although the agapanthuses took such a battering from the recent storms that they wound up in a vase indoors, some still line the Gazebo Path.

Little blue lobelias peep out from beneath rich red snapdragons and geraniums the Back Drive barrier,

while their taller relatives named Queen Victoria tower in the Oval Bed.

We have a number of ginger lilies.

The warmth of the sun brought out numerous insects. Hummingbird moths hovered among the pink phlox. I needed many unsuccessful attempts to acquire this less than wonderful image of a constantly flapping creature I think is new to our country. 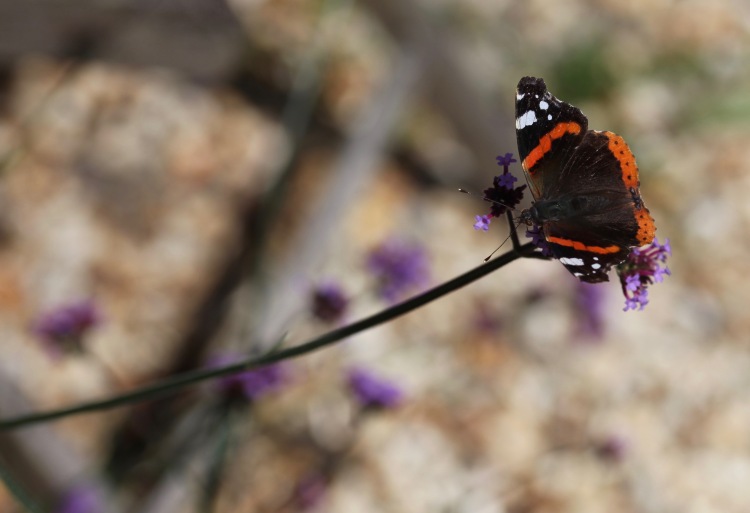 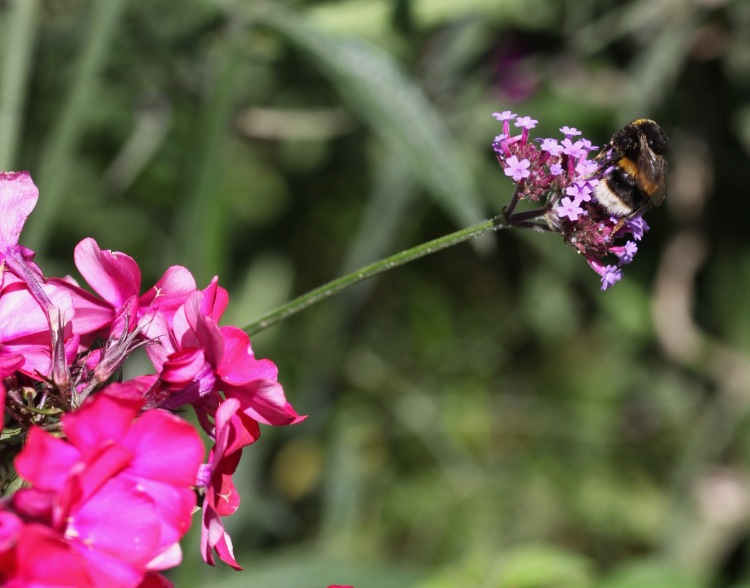 and bees that teetered somewhat. 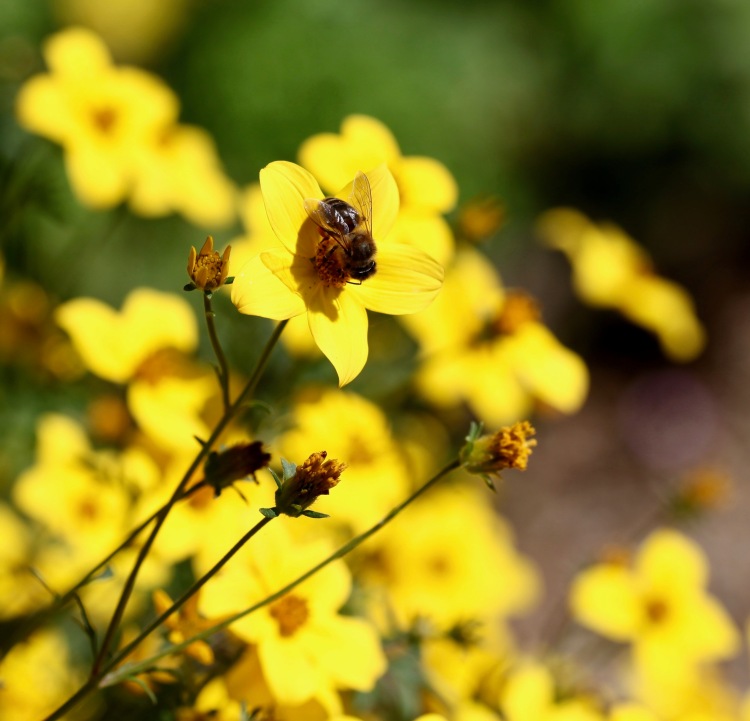 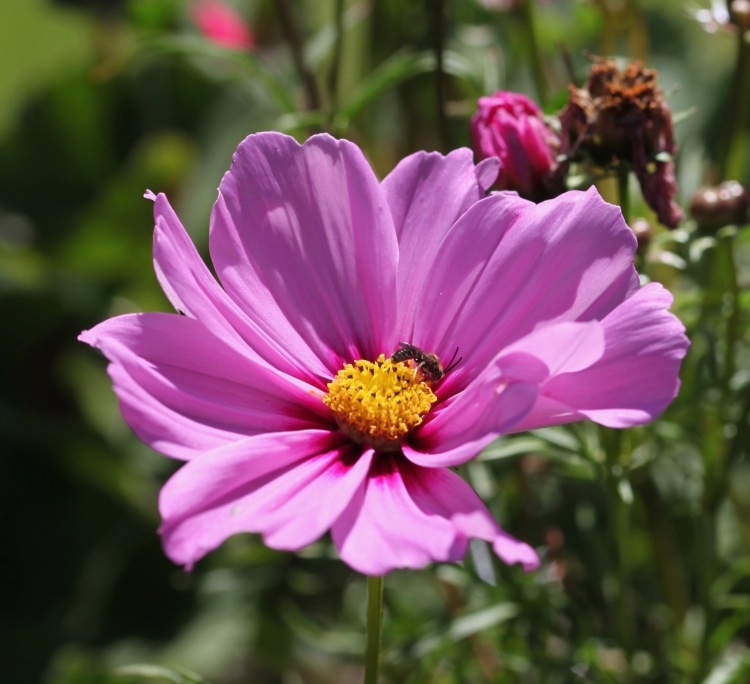 I could not identify some tiny creatures like this one on a cosmos,

or this one cleverly camouflaged by bronze fennel. 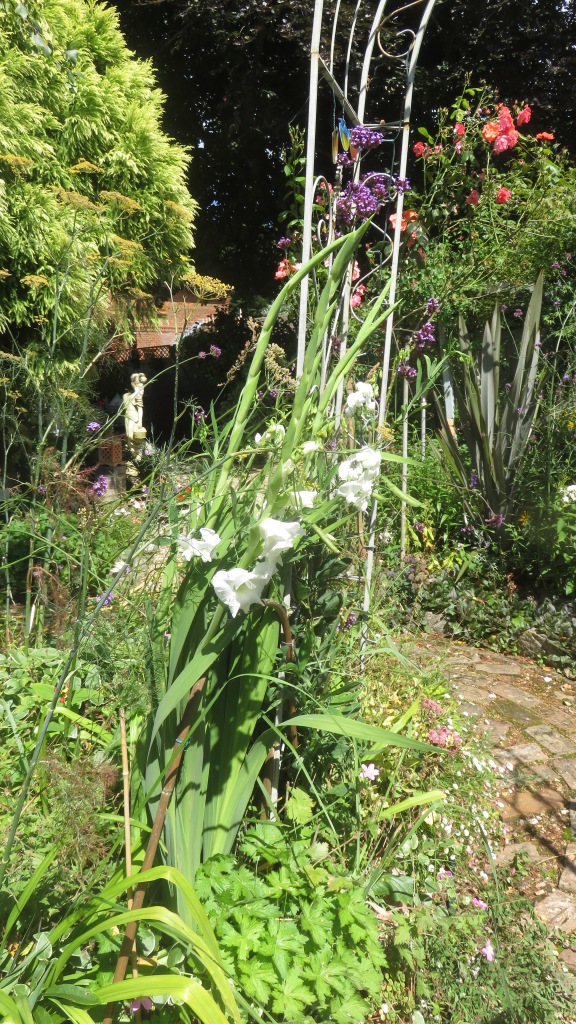 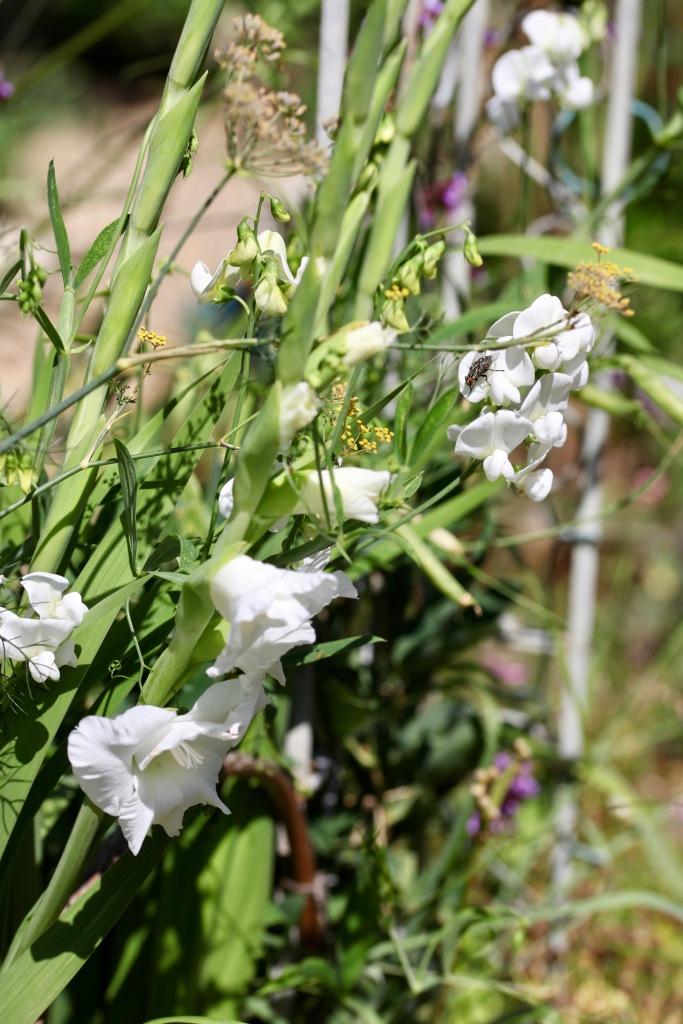 A fly was attracted by the ensemble of white sweet peas and gladioli. 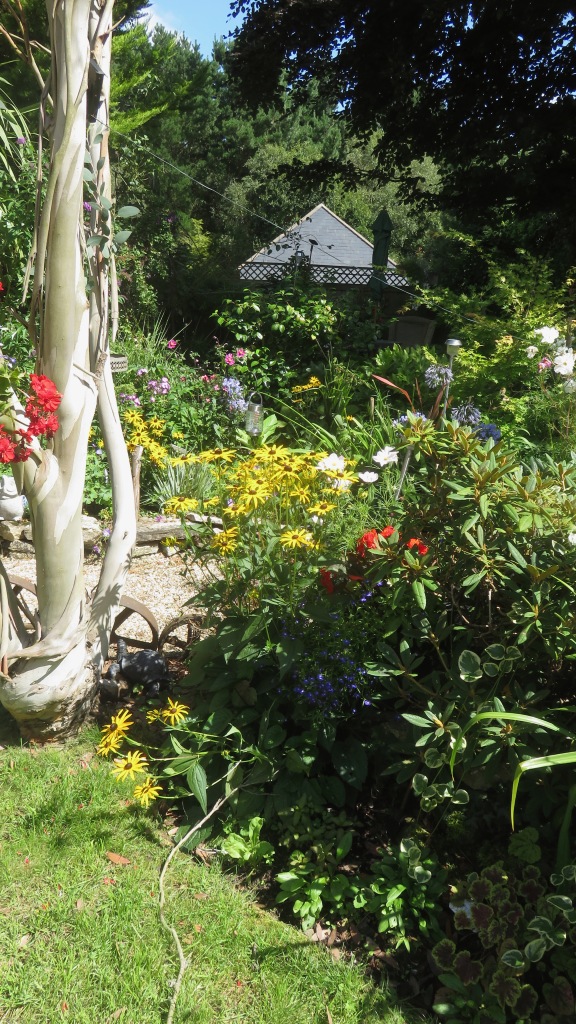 Rudbeckia snaked from bed to bed in this picture for which I must apologise to the Head Gardener because I did not remove the fallen branch before making it.

This spider was in for a disappointment. 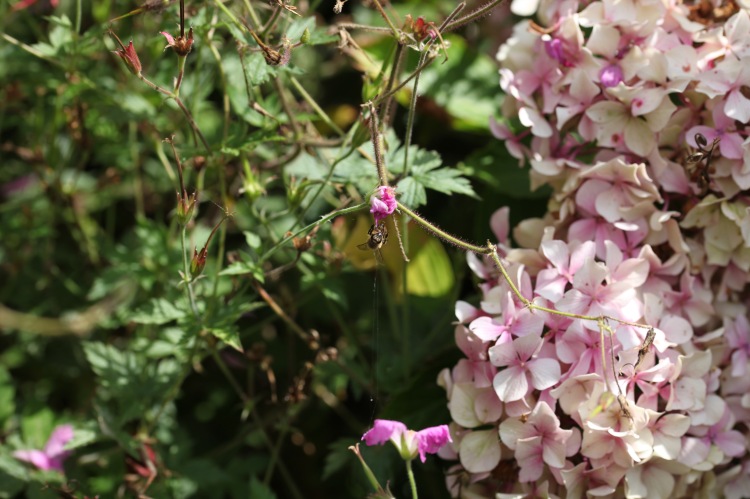 I could almost hear it licking its chops as it prepared its larder for the wasp that seemed ensnared by its web line. 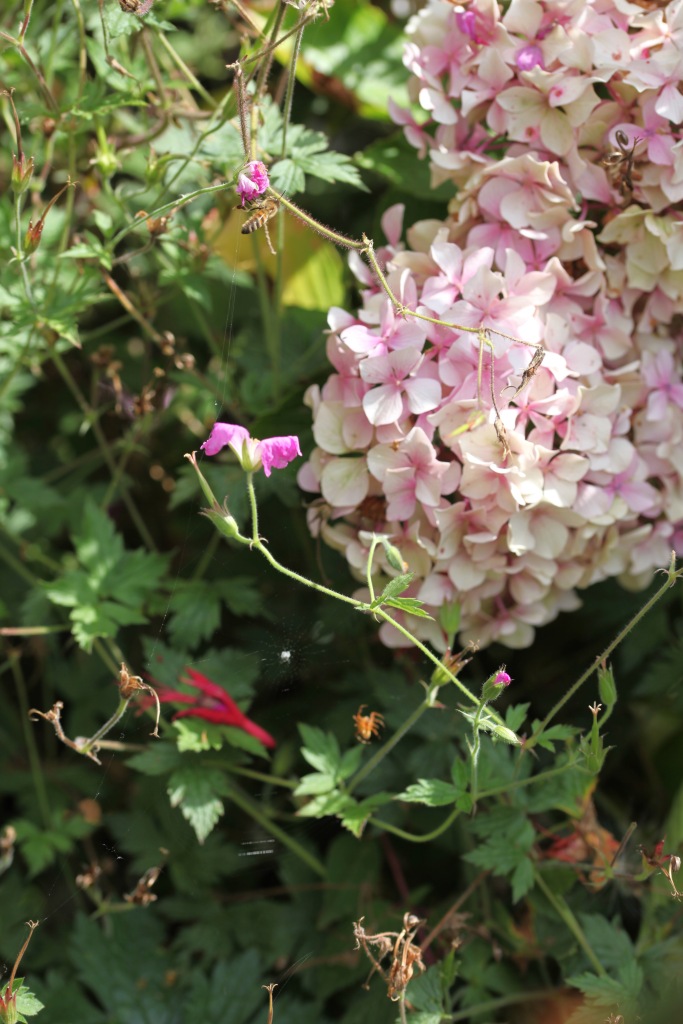 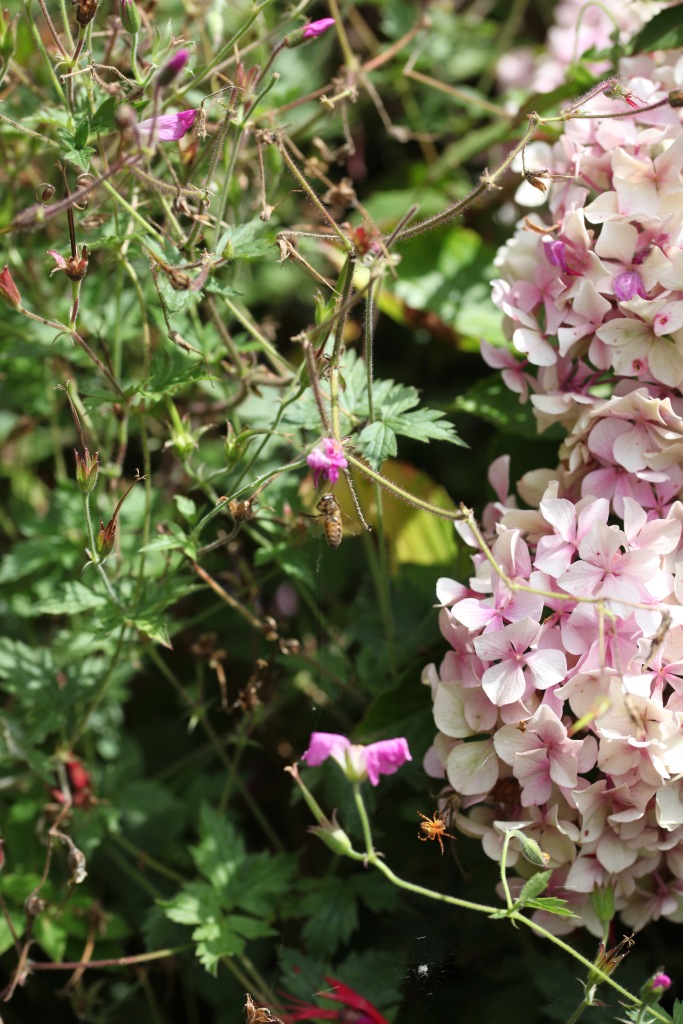 The tiny spider perfected the trap as its larger prey frantically twisted, turned, and span in its efforts to escape being drawn in.

Eventually the prospective dinner hauled itself to safety, and sped off, leaving the hungry spider to creep into hiding and lurk in wait for another victim.

This evening Jackie produced an excellent dinner of chicken Kiev, savoury rice, tasty ratatouille, and crisp runner beans. She drank Hoegaarden and I finished the Bordeaux.

51 thoughts on “The Great Escape”