CLICK ON THE INDIVIDUAL IMAGE TO ENLARGE. CLICKING ON THOSE IN GROUPS ACCESS GALLERIES; EACH OF THESE PICTURES MAY BE VIEWED FULL SIZE BY SCROLLING DOWN ITS PAGE AND CHECKING THE BOX AT BOTTOM RIGHT

Yesterday evening, at Elizabeth’s, Danni, assisted by Andy, produced a stunning curry for us all, also including friends Nicki and Andrew, with plenty to heat up for sister Jacqueline when she arrived later. After a starter of Jackie’s cooked poppadoms, we enjoyed chicken and egg curry; a chick peas dish; sag paneer; spicy cauliflower; onion bahjis; and hand made rotis. It really was a splendid tour de force. Jackie drank Kingfisher and the rest of us consumed various red wines.

We heard that Nicki and Andrew had recently visited the iconic Highgate cemetery, and Elizabeth had lent them her copy of The Magnificent Seven. They enjoyed that so much that they want to visit the other six landscaped London Victorian burial grounds.

Once my two sisters got together they couldn’t resist reminiscing about my driving stories. Elizabeth introduced the subject of the Death Of The Brown Velvet Suit, with the observation that I was the only person she knew who had been run over by his own car.

We arrived home to find that Richard had fitted a back to the sink unit and boxed in the piping against the wall. Although it still needs the worktop we were able to use it this morning.

We also admired the angles of the join at the box, over which will eventually be placed an oak window sill. 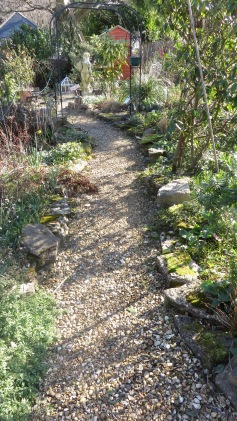 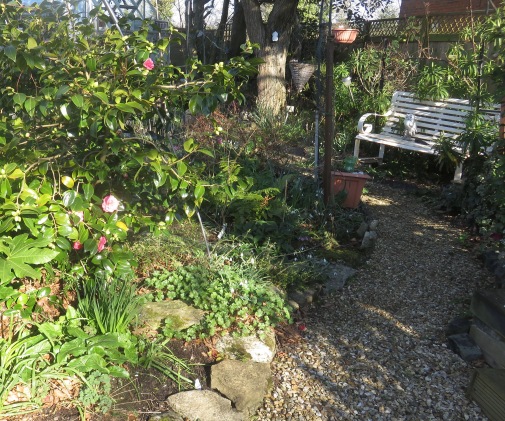 The temperature overnight was below freezing. This is expected to continue for the rest of the month. Our garden has not suffered any set-backs yet.

Now, late in the morning, we are setting off by car for Leatherhead for the annual Gilbert & Sullivan production directed by Jackie’s cousin Pat O’Connell. As usual, I will post on the proceedings tomorrow.

47 thoughts on “We Have A Working Sink”