This morning we prepared the rooms upstairs in readiness for the Christmas hoards. The first task was replacing the towel rail and cabinet and cleaning the bathroom that Aaron has redecorated. Our friend, who is A.P. Maintenance, would have come back to carry this out, but we encouraged him to stick to his well earned holiday. The three spare bedrooms were then cleaned and their beds all made up. After this came the hoovering. My role could best be described as supporting and carried out somewhat tardily.

After lunch YouView stopped working on the TV. I grappled with it for a while, then calmed myself by scanning sixteen more colour negatives on Agfa film from the 1983 holiday in North Wales. Fortunately, the equipment required for this functioned satisfactorily, and whilst I was working on this, Jackie informed me that the BT service had returned to normality.

We stayed in a farmhouse near the home of our friends Ann and Don whilst their own property was being renovated.

Here is a broader view of the houses lying beneath the heaps from the discarded slate mine featured in ‘Aberfan’. As always, clicking on the images gives more detail, such as that of the children’s playground indicating the family nature of this fairly remote community near Cerrigydrudion in Corwen.

A second picture shows rugby and soccer pitches alongside each other. I wondered which was the more popular game here. 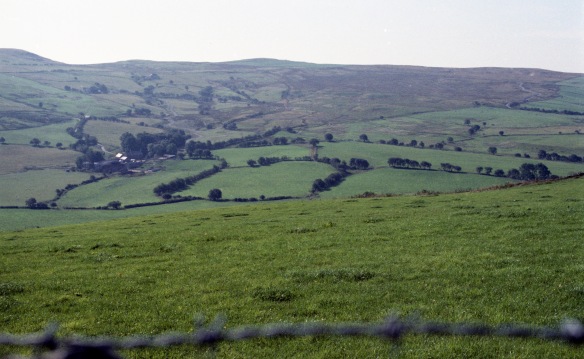 This view looks across the further side of the valley,

above which nestles the farm at which we stayed. In the first of these two pictures Becky and Matthew approach the cattle. Jessica replaces them in the second,

The farm was approached from this rough track. 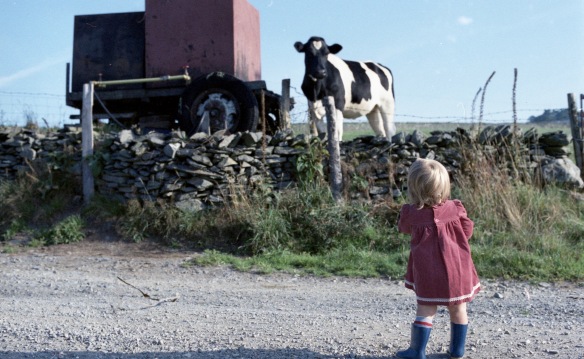 Louisa made the acquaintance of the inquisitive local fauna,

and tried her hand at bringing life back to the train in the disused mine.

Barbed wire attached to a weathered wooden post in front of a large boulder exemplified the rugged nature of the landscape, 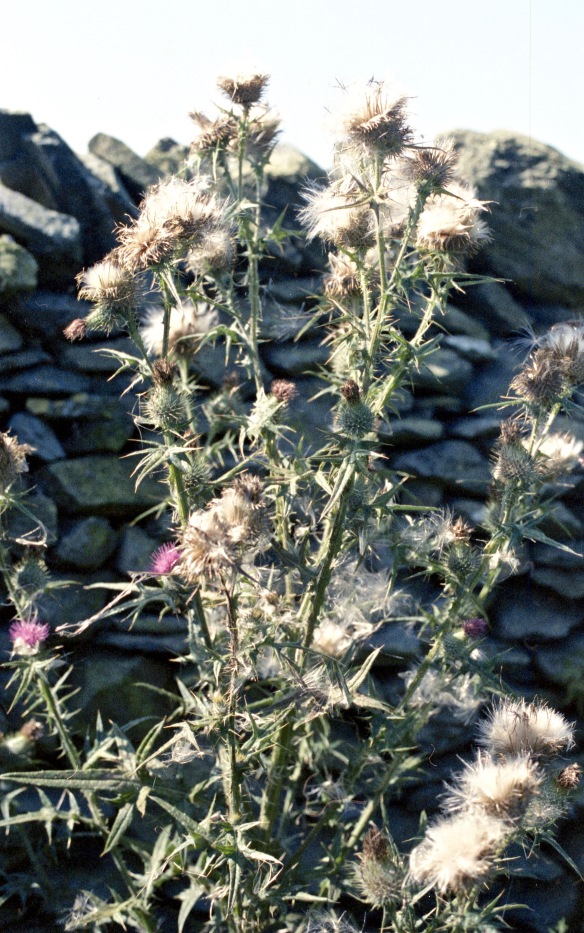 to which plentiful spiky thistles spoke,

and in which foxgloves managed to survive.

This evening Jackie cooked a chicken jalfrezi for the eighteen people she will be feeding on Boxing Day. Eyes streaming until she created a through draft by opening the kitchen doors to the 40+ m.p.h. prevailing winds, I peeled and chopped the onions.