Jackie spent much of the day creating a new bower, called Gardener’s Rest, by the head gardener’s path, 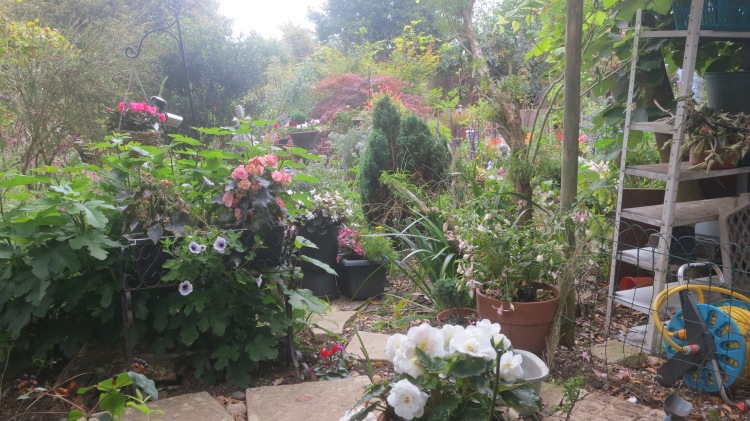 thus offering a new view across the garden. This meant some paving material was required. I therefore transported some concrete and bricks from the pile in the former kitchen garden. In an effort to select only bricks that may suit my lady’s aesthetic sense, I leant on the lid of the plastic water butt behind the heap. The lid caved in and two bricks descended into the murky depths. They are still there.

After that I decided I was best employed on a photographic project, and continued with my 1982 negatives. 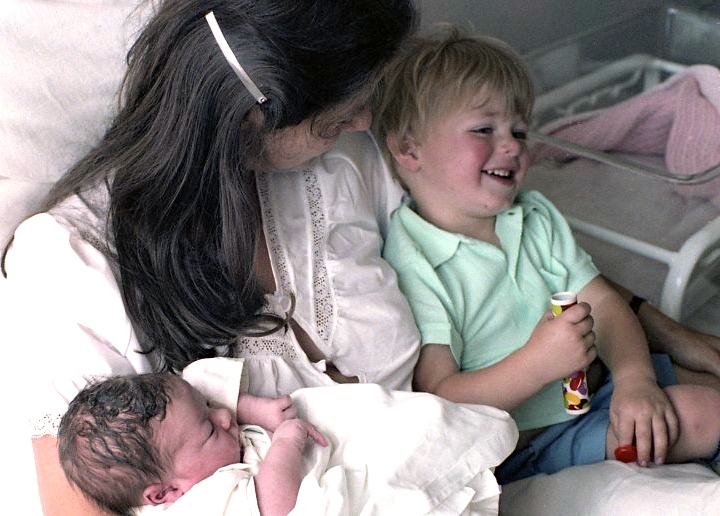 The last set had presented Sam preparing for his new sister. The group scanned this morning were taken not long after Louisa’s birth on 24th May. Her brother seems pretty happy with her arrival, unless he was simply enjoying his Smarties. Seriously, his genuine enjoyment had nothing to do with the sweets.

Michael was also present in St George’s Hospital on this day, and held his sister. Most parents count the toes on their newborn infants, just to make sure.

This picture ensures that there can be no doubt that Louisa had the correct number on at least one foot.

Twelve years earlier Matthew had welcomed Becky, eight days after her birth on 19th August 1970. It is probably a sign of the attitudinal changes in that time that Mat had to wait until Becky came home, whereas Sam could be happily ensconced on his mother’s bed. The two sisters don’t look at all dissimilar.

After finishing this project I walked up Hordle Lane and found the elusive footpath across the fields and into that through the woods, where sweet chestnuts are falling from the trees. The sign leading from the lane had, as I thought, been obscured by foliage.

The next one, almost worn out, pointed diagonally across the ploughed field. A man patrolling this area on a quad bike scowled at me and declined to return my wave. On the path to Peter’s Farm, I was stopped by a gentleman who politely informed me that he rented the farm and I was trespassing. A lengthy discussion ensued during which I learned that this was all private land. One public footpath  sign had completely disappeared, and there were no signs indicating privacy. He told me where I could pick up a footpath that would lead me onto Christchurch Road. I didn’t fancy that, so I retraced my steps back to Hordle Lane. Oh to be in Aquitaine where, in my experience, wide footpaths are clearly marked, well maintained, and ramblers are welcome. I didn’t think it politic to ask if I could photograph either farmer.

Later this afternoon Jackie drove us to Emsworth for a birthday meal with Ian, Becky, and Flo at the Spice Cottage Bangladeshi restaurant in Westbourne. Ian and I walked to the restaurant where the others joined us by car. The curry house was very good indeed. Food, service, and atmosphere were excellent on this packed out Saturday evening. There was no piped music, but muted Bollywood films were shown on a television mounted on the wall. I slept most of the way on our journey home.