Here are some of the fruits of Jackie’s recent and past creative labours in the garden: 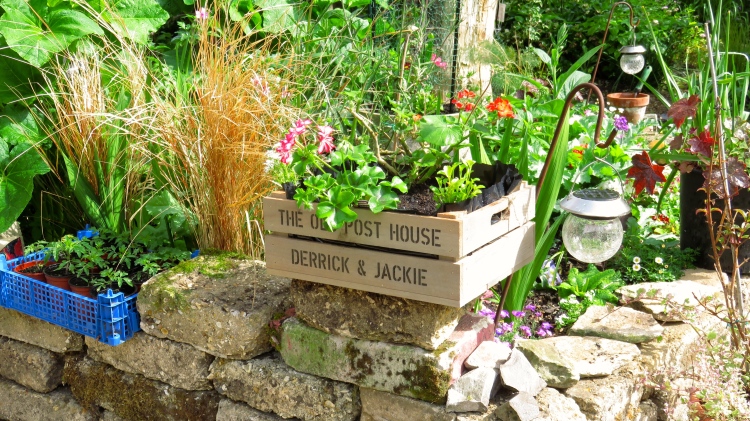 Helen and Bill gave us this box for Christmas. It has now been filled with plants and placed  on the wall surrounding the recently converted compost heap, providing a signal to visitors that they have come up the correct back drive. These concrete blocks are some of those I dug out of the kitchen garden last year.

Where there was a ramshackle, fairly useless, cobbled, fence today’s Birthday Girl has produced a natural barrier. All that remains is for Aaron to finish paving the projected rose garden, and consequently removing the bag of sand and stack of bricks. I did help bag up the rubble, and moved remaining rocks and concrete blocks to other parts of the garden, where Jackie reinforced border edges and laid stepping stones across the beds with them. 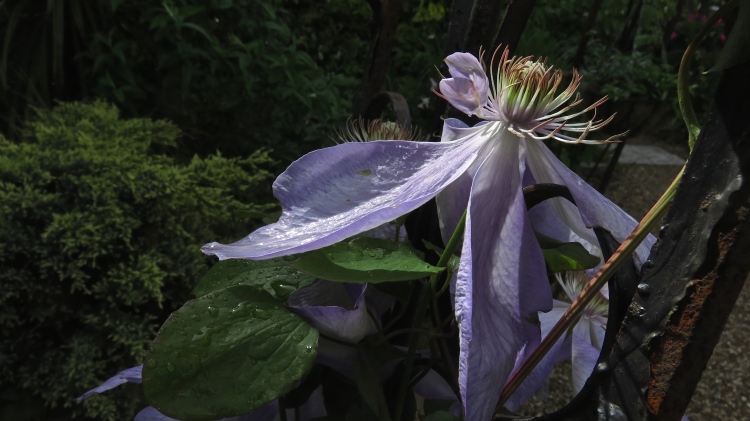 Somewhat flattened and spattered by the battering of yesterday’s gales, this large blue clematis was such a weedy little thing last year that we incorrectly identified it. It has been lovingly fed and nurtured through the winter. Still not sure of its identity, we know that its splendid sepals must belong to a different variety.

We have hanging baskets wherever a hook can be hitched. These marigolds swing from the eucalyptus tree. At least, they do today. Features tend to be moved around, and sometimes I only spot this when I bang my head on them.

This afternoon a fly engaged in mountaineering atop a new deep pink climber heavily pruned and retrained last autumn;

and a gargantuan humble bee, the pollen dusting adding the last straw to prevent a standing take-off, tumbled to the ground as Jackie carefully flicked the slug bait off the recently planted erigeron Sea Breeze, on which the creature was becoming intoxicated. The insect lumbered off, rather like Eric the pheasant. The bait, by the way, is of the type unharmful to birds.

This afternoon we dumped several bags of rubble into the Efford Recycling Centre.

With 50 m.p.h. winds forecast overnight, Jackie toured the garden taking down and sheltering her hanging baskets. Goodness knows where the above marigolds will be found tomorrow.

This evening we dined at The Plough in Tiptoe, where we found the usual efficient, friendly service, and superb, plentiful food. Jackie’s choice was the half rack of ribs. I once had the whole rack and had as much trouble managing to eat it all as I had with today’s mixed grill.

I have featured this feast before, and make no apology for photographing it again, because it has to be seen to be believed. However, because this huge plate is piled high, I bet you can’t list everything on it. Don’t be deceived by the steak knife. It is itself of proportions that would have suited Jim Bowie.  Jackie enjoyed the pub’s legendary creme brûlée. I was so full I could not manage a sweet. Jackie drank Becks. My choice of beverage was Doom Bar.

30 thoughts on “It Has To Be Seen To Be Believed”