It is not often one can be grateful for a traffic diversion, especially those in The New Forest which tend to send you miles out of your way. So it was this morning as Jackie drove us out there.

Had we not been sent all the way back to New Milton we would not have seen the sun mooning through the mist over Station Road.

The drip, drip, dripping of the melting frost was all there was to be heard in misty Gorley,

where the glassine stream stood still; 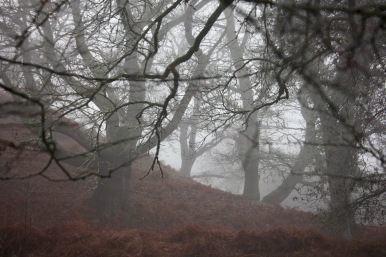 arboreal forms emerged from the gloom;

and a lime-green clad cyclist took his chances on the road to Linwood. In the foreground of this shot stands one of the many posts measuring water levels; in this instance of the stream pictured above.

Trees bedecked with flowers usually mark a spot where someone has died in a road accident. Maybe that is why this oak at the crossroads by the ford has been decorated with fleeting frost, with flowers past their best, with diced mushrooms, and with a clump of once potted bulbs. 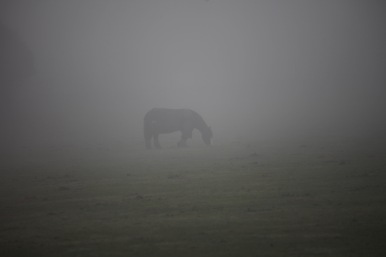 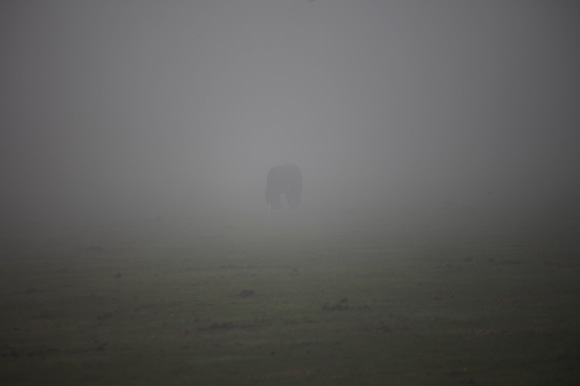 Ponies in a field at Mockbeggar were so obscured as to be impossible to tell whether or not they were domesticated. One definitely wore a rug, as their winter garments are termed. This would not be a wild forest creature. Can you spot it? 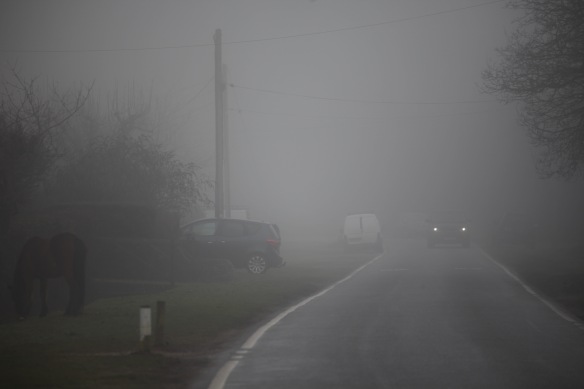 It would have been equally difficult for the driver coming through Ibsley to have discerned the pony to the left of this picture, had it decided to turn and cross the  road. 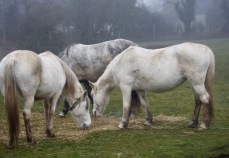 It was as the mist was beginning to clear on the approach to Frogham that we encountered a living modern sculpture based on Antonio Canova’s “The Three Graces”. 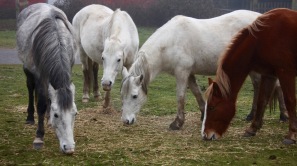 A chestnut gatecrashed the hay party those finely marbled greys were enjoying. 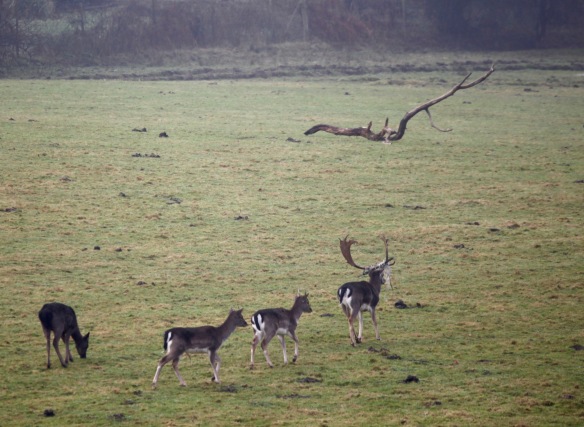 At Frogham the appearance of a stately stag was somewhat marred by the tangled encumbrance attached to his antlers. Perhaps he was aiming to snaffle the magnificent sloughed set protruding from the field ahead of him. 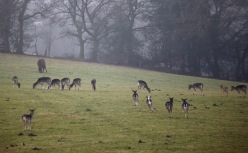 He was leading his family towards the herd sharing the land with a solitary pony. 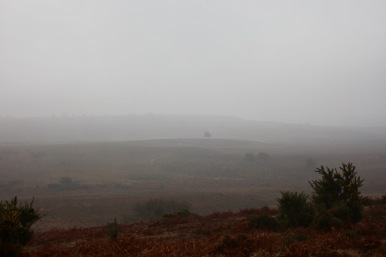 As the mist began to clear on either side of Roger Penny Way on our return home, the warming sun caused another to rise from the moors,

and exposed a mid-distant group of houses.

This evening we dined on chicken Kiev; peppers stuffed with Jackie’s savoury rice; green beans, and spinach; followed by bread and Benecol pudding with evap. I finished the Madiran.

58 thoughts on “The Three Graces”