CLICK ON ANY IMAGE IN A GROUP TO ACCESS ITS GALLERY, INDIVIDUAL MEMBERS OF WHICH CAN BE VIEWED FULL SIZE BY SCROLLING DOWN AND CLICKING BOX AT BOTTOM RIGHT. FURTHER ENLARGEMENT MAY BE OBTAINED WITH A CLICK OR TWO 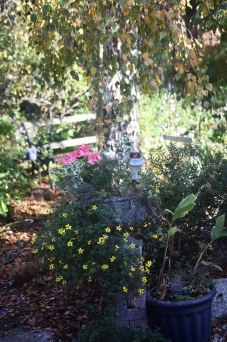 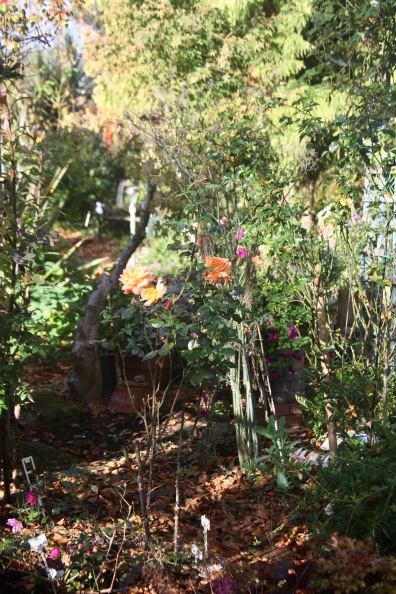 After early morning rain we enjoyed intermittent sunshine. A wander around the garden produced much evidence of continued growth.

This afternoon Jackie drove herself and me to Ringwood where I collected printing paper and inks from Wessex Photographic and she bought a winter coat at M & Co. We continued into the forest.

Trees along its banks were reflected in the stream at Ibsley, 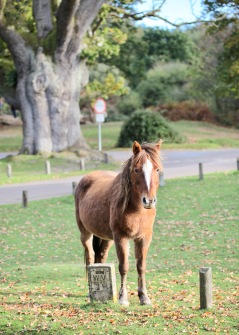 where a loan pony, ignoring a sudden spurt of rain, surveyed passers-by within sight of a tree of massive girth, 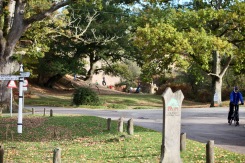 beyond which a group of youngsters enjoyed the use of a tyre swing. 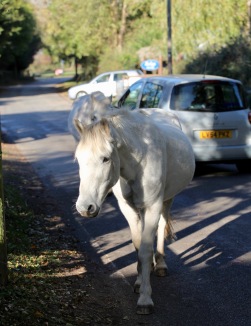 We stopped at Hockey’s Farm Shop to buy a joint of pannage pork, reputed to offer a special flavour. A couple of ponies wandered along the road outside; two field horses, like most others, as protection against the expected colder nights, now wear their rugs.

As we near Remembrance Sunday an outlined World War I combatant has appeared on a wall near Hockey’s; cutouts have patrolled around New Milton throughout the summer; an army nurse stands near Barton on Sea.

From the clifftop at Barton we were given a clear view of the Isle of Wight, The Needles, and the lighthouse; while beyond the golf course behind us we could see rain falling.

Synchronised gulls perched on fence posts, until one flew off over another.

As I wandered around the garden I had found myself thinking ‘is it really nearly November? Never’. Pannage pork, horses in rugs, and the Lest We Forget memorials perhaps suggest otherwise.

This evening we dined on Jackie’s perfect pork paprika served with savoury rice and crisp cauliflower with which she drank Hoegaarden and Elizabeth and I drank Pulpito Tempranillo 2016. This was followed by the Culinary Queen’s honey and treacle tart.