This morning Jackie drove me to New Milton where I bought a pair of sandals and delivered some dry cleaning. We then continued into the forest for a short trip giving us time to return home for a FaceTime date with Sam and Malachi.

Our first tail-twitching ponies were encountered alongside

pausing for the occasional bite, a group of ponies emerged from the woodlands;

and made their way onto the moorland;

As we neared home, on Holmsley Road, two foals accompanied another group.

One fascinated infant snuggled up to the bonnet of a small van, the driver of which disembarked and persuaded the traffic hazard

Back at home I enjoyed a torchlight FaceTime conversation with my son and grandson in Perth. Sitting here in our summer mid-day it was fascinating seeing Sam and Malachi in pitch-black darkness, just after their 7 p.m., enlivened by the flames of a garden fire and Mal’s bright reading aid. The torch was also shone on the chooks in their coop. I was reminded that the sun sets very rapidly over there.

This evening we dined excellently on lamb leg steaks; roasted parsnips and butternut squash; Lyonnaise potatoes; carrots, cabbage and mange touts. I finished the Carinena while Jackie abstained because she had drunk her Hoegaarden on the patio when we had pre-dinner drinks overlooked by a

For some time now, Aaron, our very own Green Man, has been working his way through the removal of the stumps of the old grizelinia hedging that he cut down a year or two back. This morning he completed the task.

We now have several clusters of snake’s head fritillaries;

a range of hellebores preparing to drop their seeds;

and these wallflowers fronting euphorbia.

Birds such as darting goldfinches in the cypress, and cumbersome pigeons in the copper beech just coming into leaf are busy nesting.

Reminding me of ‘And What Came Next?‘, a Red Admiral butterfly and a fly slumber alongside each other beneath

catkins dangling from the weeping birch.

For a long, leisurely, lunch Mat, Tess, Poppy, Jackie, and I joined Sam, Holly, Malachi, and Orlaith at Hoburne, Bashley, holiday home site. The food, service, and facilities were excellent. I chose a fishcake and salad starter followed by a plentiful roast beef dinner. Others also enjoyed their selections. We shared Prosecco, one glass of which was free for each of the Mothers on their day. None of us could eat a dessert. Afterwards the adults sat in the sunshine while the children played football and generally ran about. 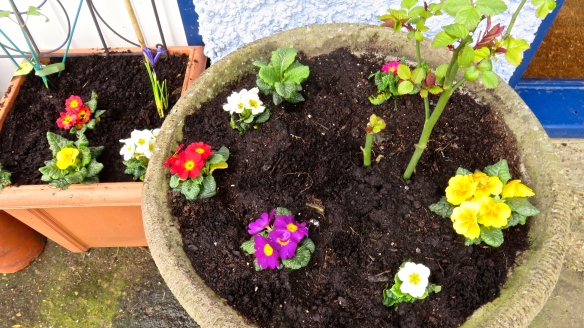 A very dull afternoon was brightened by the tubs at the front that Jackie had planted up in the morning; and the trills of songbirds in the trees, as I wandered around the garden. 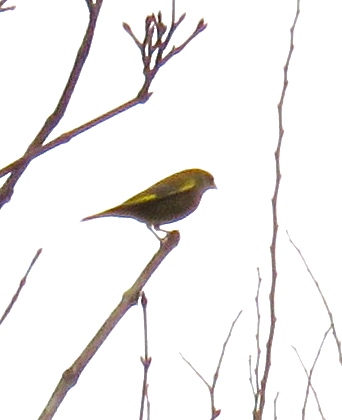 iPhoto, aided by the Canon SX700 HS lens, helped me to transform a tiny black silhouette high up in a tree into a colourful goldfinch. The computer’s dictionary found this bird far more acceptable than yesterday’s greenfinches which it had insisted on changing to goldfinches. After a battle it allowed my word provided I accepted red underlining in the draft. I trust it is happy now. 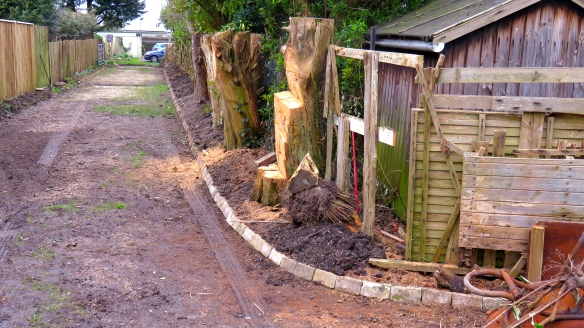 Yesterday Aaron continued with his transformation of the back drive. He has now completed one side and most of the other one. Excess soil has been transferred to the verges and to the rose garden. I had dug out some of the bricks you see in the picture from what was then the kitchen garden. Many of the concrete slabs removed from there have been recycled elsewhere, and now that it has become a two way traffic I am reminded of my mother’s phrase: ‘You are playing put and take’, which she applied when we children were carrying out a similar process for one reason or another.

Mum was referring to the title of a game that first became known during the First World War (1914-18).
‘The full history of the game is unclear but It is thought to have been invented by a soldier in the trenches.
The original game was made from a brass bullet that the soldier shaped into a spinning top with six sides.
Each side had an instruction on that was either Put one, Put two, Put all, Take one ,Take Two, or Take all.
The top was spun by players, who each put an ante in the pot (said to be a cigarette), and depending on how the top fell
either took or put how many cigarettes indicated.
The game became so popular that during the 1920-30s it was introduced as a gambling Game and was predominantly played
in the North of England in Working mens clubs and pubs. Because the top would last virtually forever, being made of brass,
the production of the game did not last for long and during the next 40 years the playing of the game gradually died out.

Rules:
Any number of players can play. Each player puts a coin or chip in the pot.
The first player spins the top. If the top come down “Put” side uppermost the player puts into the pot the amount indicated (i.e. Put one two or All).
For “Put All” the player doubles the amount in the pot. If the spinner lands with “Take” side uppermost the player takes the amount indicated from the pot.
For Take All the player takes the whole pot.
The next player spins and the game goes on until somebody spins “Take All” and the game is re-started with a new Ante.’

The game is still popular today. Here is a modern version of the soldier’s bullet: 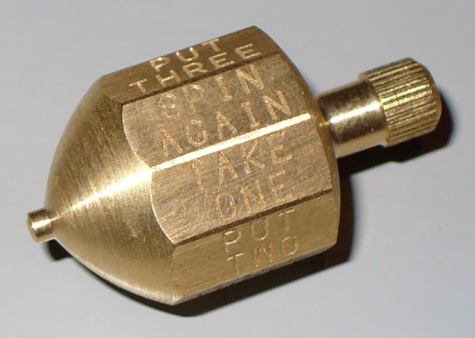 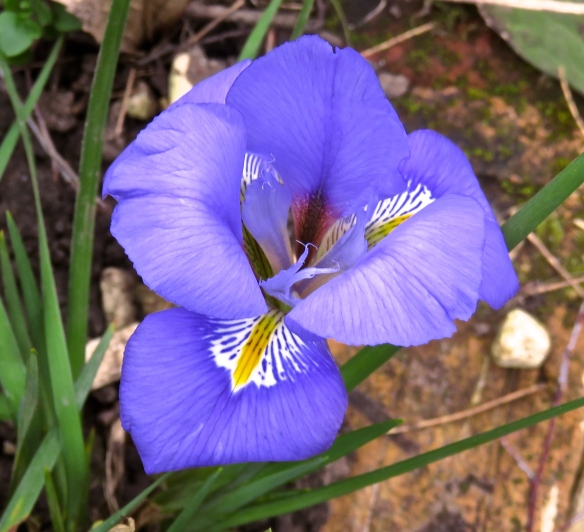 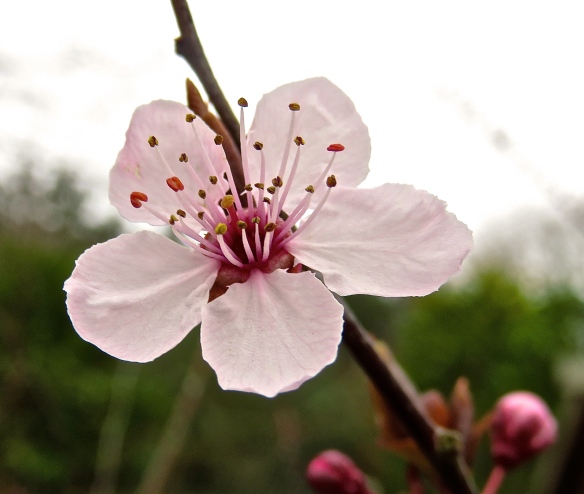 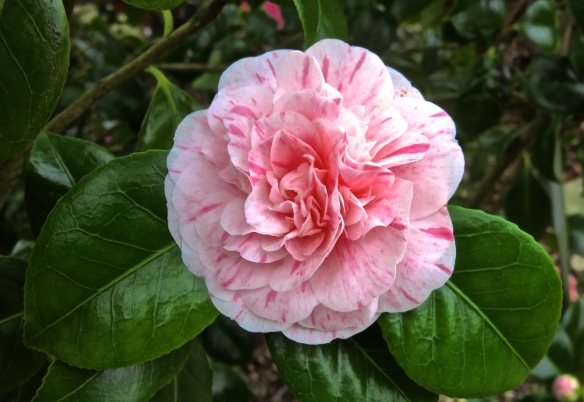 The small blue irises are multiplying; the previously pruned prunus is flowering; and the pink striped camellia is in full bloom. 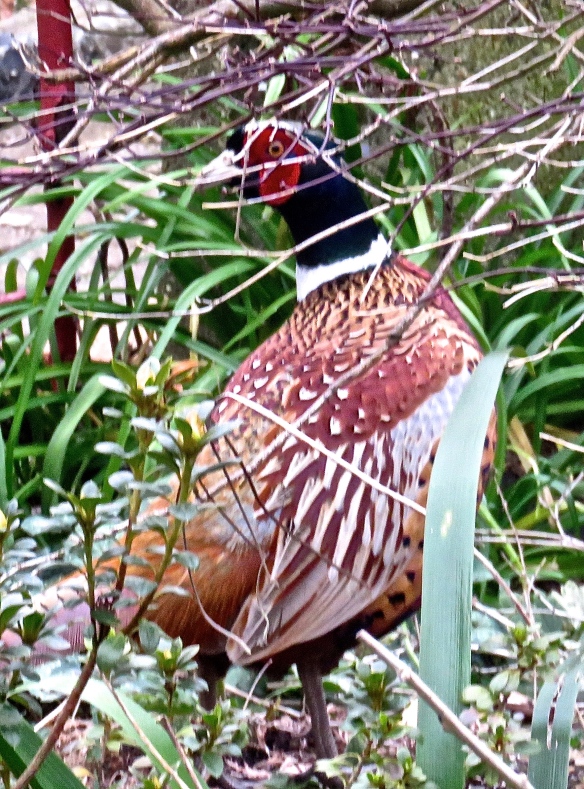 Our stately visiting pheasant frequently stretches its talons around the garden. Later this afternoon I was able to get a bead on it through the kitchen window as it pecked up spilled scraps from the greenfinches’ feeder. As soon as I joined it in the garden, it flailed its forelimbs, and flapped off in a flurry far over neighbouring firs. I do hope no-one shoots it before I get it properly in focus.

This evening we dined on Jackie’s charming cottage pie, with piquant cauliflower cheese (recipe), crisp carrots and cabbage; followed by crunchy raspberry crumble. She refrained from imbibing, whilst I finished the Cotes du Rhone Villages.