This is a view Jackie captured of the garden yesterday afternoon. It looked pretty much the same today.

She drove me to New Hall Hospital this morning for an appointment with Claire, my physiotherapist. Claire does not go in for false reassurance, but she expressed genuine amazement at my post operative progress. Just a fortnight on, although I am still in considerable pain, I have very good flexiblity, especially when compared to last time round, and am apparently walking well (with support).

I transferred to crutches and left the – too small – Zimmer frame with Claire. Jackie was on hand to catch us emerging from the consulting room.

I dozed away much of the afternoon, and this evening we dined on Mr Pink’s Fish and Chips.

The Physiotherapists at New Hall Hospital pronounced this morning that I had no further need of practice on the stairs, and Mr Kask proclaimed that I could go home today. I therefore rang Jackie who came to collect me just as I was being served with lunch.

I had ordered a small portion with no dessert. The starter was a mixed vegetable soup. My cancellation of the bread roll had been followed, but, it seems that someone cannot produce small portions of succulent roast pork, with apple sauce, pigs in blankets, sage and onion stuffing, crisp carrots, cauliflower, and broccoli, and tasty gravy. With this, I drank orange juice.The wheelchair sent to transport me to the car might have fitted Mum, but was not in the least adequate for me. After an unsuccessful attempt to squeeze me into it, another was requisitioned.

It was easier for Jackie to pop the supplied Zimmer frame into the boot, than to swivel me into the passenger seat, and prise me out of it at the end of the journey.

At home I was in need of pain relief and sleep in that order. I was propped in front of the TV in order to encourage ‘Antiques Road Trip’ to work its soporific miracle. This worked like a dream.

If I can get upstairs I will go to bed soon with a bacon sandwich.

Because I hadn’t yet tackled the stairs on crutches this morning, Mr Kask decided I would not be going home today. I had two sessions on the stairs afterwards.

The second time Jackie was on hand to record my efforts along the corridor,

and eventually that I’ve got the hang of it.

This is her view of the hospital grounds

and of the main entrance from our wing.

Anyone who has followed my representations of my main meal of the day over the years may be surprised to learn that I have had to adjust my choices from the hospital menus. I am just not able to manage three large three course meals in a day any more. I have now dropped a course from my selections and opted for small portions. Thus, with tonight’s water, I chose tomato and basil soup, without it’s warm bread roll; moist egg and cress sandwiches; and fresh fruit salad. Jackie helped me out with the sandwich.

First, a note about yesterday’s absence, brought about by the demise our Wi Fi router.

I produced a number of photographs which are essential to the post which will have to wait until my return home.

Dawn had not yet arrived when we reported at New Hall Hospital reception for my right knee total replacement. Because I was first on, Jackie stayed until I was led to the theatre, then went home, returned this afternoon, and took

After my first replacement last May, I was pretty groggy and couldn’t eat any of the lovely food.

In hospital life’s true  importances are pared down to the bare essentials. The result of blood-tests fade into insignificance when compared with the ability to get out of bed; to put one foot in front of the other; to preserve your dignity in hospital gowns designed to expose your backside; to make your way to the loo on crutches; and to perform evacuation and ablution without falling over.

Well, this morning, I enjoyed my breakfast, managed a poo in the right place, and wiped my own bum. I had memories of infancy and proudly calling: “I DONE IT, MUMMY”

Oh, and the blood tests revealed no problems; the physio took me for a walk, and Mr Kask pronounced “home today”.  But you must admit, I have my priorities right.

Jackie had been asked to collect me at 1 p.m. She arrived at 12.45, just ahead of my lunch. This was appetisingly moist, well filled, tomato omelette, new potatoes, and fresh salad, accompanied by tangy orange juice. I made a little headway, then needed an urgent trip to the loo. I managed to get there without tripping over anything, poo in the right place,  and wipe my own bum without gathering too much excreta in my finger nails. When I returned to the ward, wanting to cry “I DONE IT AGAIN, MUMMY’  ……..you’ve guessed………

Nurse Vanessa gave us a very clear explanation of the discharge pack, and Hanah wheeled me to the car and prised me into it. Jackie then drove me home in the pouring rain.

Early this morning Jackie drove me to New Hall Hospital for a Pre-Admission Clinical appointment. This was a most thorough and efficient physical check involving all the usual blood tests, etc., including an ECG. I seem to have passed. There followed various questionnaires for which Jackie was invited to participate. Next, we were introduced to the Head Physiotherapist who explained what we were to expect before and after surgery. I was, incidentally told that I was “a lucky man” in my allocated surgeon.

The off-white tarpaulin covering the skies developed a leak in the afternoon, so I was fortunate in managing to produce a few photographs before lunch. 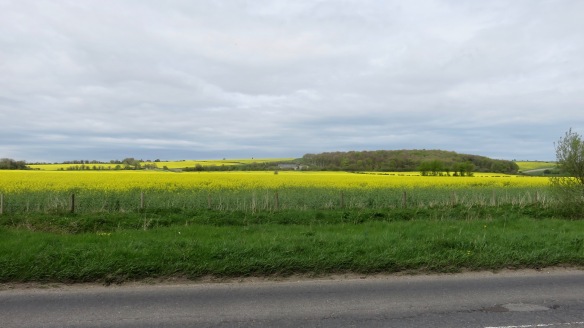 On the road through Salisbury’s Downton, fields of oil seed rape blazed in the murk.

beribboned by tributaries of the River Avon near the mill at Woodgreen. (See Paol Soren’s comment below for important information about these creatures) 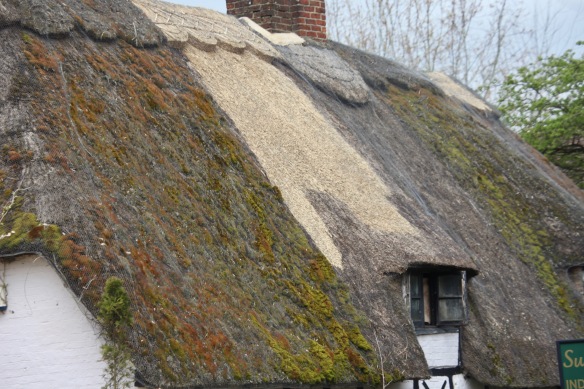 Having been attracted by the recently patched thatched roof of

we just had to have lunch in this 16th century building set in 3/4 of an acre of grounds. We were not disappointed. Service was friendly and efficient and the food was first rate. Jackie enjoyed her sheek kebab starter followed by prawn buna and aromatic pilau rice; as I did my mulligatawny soup, lamb tikka gowchi, and special egg rice. We both drank Kingfisher.

We have an expression, “fill your boots”, originating from early naval times, when a mug was called a boot and this was an encouragement to get quite drunk. Now we use it to mean eat so much that your boots are also full. We didn’t exactly do that, but Jackie brought some of hers home in a doggy bag for this evening. An earlier visitor to the restaurant avoided doing so by leaving his boots outside.

My laptop died some time ago. Later this afternoon we collected a replacement – a MacBook – from Peacock computers and I did my head in trying to load all my various accounts, like this one, onto it.

CLICK ON ANY IMAGE IN A GROUP TO ACCESS ITS GALLERY, INDIVIDUAL MEMBERS OF WHICH CAN BE VIEWED FULL SIZE BY SCROLLING DOWN AND CHECKING BOX AT BOTTOM RIGHT

I am happy to say a couple of reasonably quick telephone calls appear to have resolved yesterday’s banking problems. First I phoned NatWest and established that my urgent transfer of 4th will be sent off today to the correct BIC and IBAN numbers in France. Then I called Barclays, France, and received confirmation that I would not be charged for the overdraft that resulted from their negligence. Obviously the proof will be in the pudding. 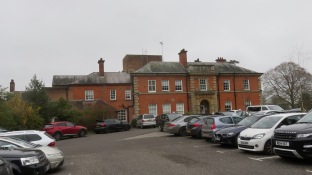 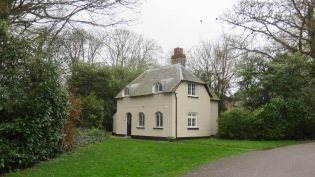 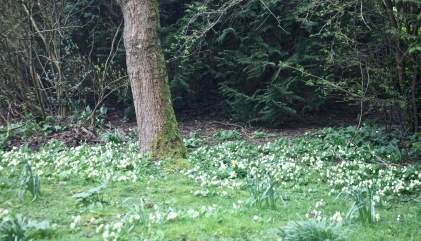 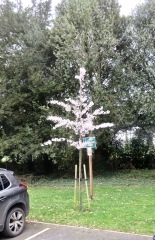 This afternoon, Jackie drove us to New Hall Hospital at Bodenham, just south of Salisbury. This was in order to test out the journey time for my Monday morning appointment with the knee surgeon. If one has to contemplate treatment, I can think of worse venues than this Georgian listed building with its attractive lodge house, mature trees and shrubberies, pink cherry blossom and banks of primroses. 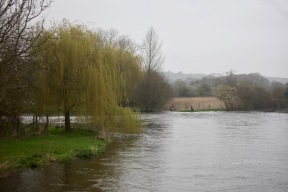 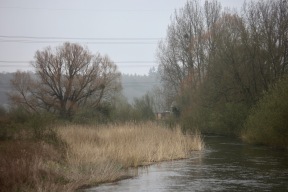 Once again a murky ermine cape had been thrown over the shoulders of the forest, rendering smoky hues to the landscape. This was most apparent when, on our homeward journey we diverted to look at the mill race on the approach to Woodgreen. 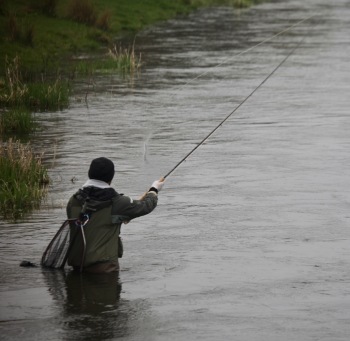 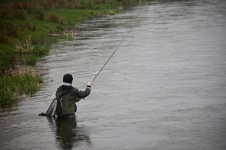 It was on the bridge over the River Avon that I engaged in a friendly conversation with Richard, who had parked beside us. This engaging young man had much local knowledge and a keen interest in wildlife. He showed me where he had seen an otter with three cubs near the top right hand corner of the penultimate picture above. Knowing full well that there were no salmon at this location, he had nevertheless chosen the spot to practice his casting. First, he needed to confront the fast flowing waters and, since the river was at least a foot deeper than usual, test the depth. He was satisfied. I took a few photographs. We waved our goodbyes. Well, I waved. Richard had his hands full. 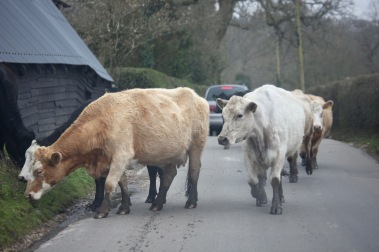 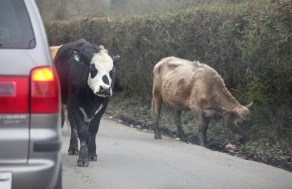 On this Friday early evening Lyndhurst was likely to be bottlenecked. We therefore opted to take the route though Minstead and Emery Down, only to encounter a motley herd of heifers exercising their right to occupy the road.

We are now driving to dine at Dynasty in Brockenhurst with Elizabeth, Danni, and Andy. I may report on that tomorrow.