Beside the Weeping Birch Bed with its kniphofias, petunias, heleniums, and pelargoniums.

The yellow kniphofia is Popsicle Mango; the terracotta one has attracted a wasp.

The Rose Garden, the Palm Bed, and the Oval Bed glow with aureate colour;

Virginia creeper is beginning to take on a ruby hue,

with which penstemons are trimmed.

Early this warm and sunny evening we took a drive into the forest.

I disembarked from the car on the road between Brockenhurst and Beaulieu.

I walked along a gravelled path and over the dry terrain,

the sweeping sounds of my sandals answering those of the jaws of the ponies cropping the grass they shared with a few cattle joining them on their way in from the verges.

This evening we dined on Hordle Chinese Take Away’s usual fine fare with which Jackie drank Blue Moon and I drank sparkling water.

Nugget was singing outside the stable door this morning at 6 a.m.

I stepped out early to take advantage of the bright morning light. Jackie tells me that our little robin was perched on top of this kniphofia yesterday evening for quite some time, chirping away. Other images are entitled in the gallery.

Here are more of the red hot pokers and heucheras.

Somewhere among these Weeping Birch branches Nugget began a tuneful game of hide and seek with me. Please don’t search for him in this picture. I couldn’t find him, and if you do I will be upset.

However, today’s “Where’s Nugget” (23a-e) offers five opportunities for his fans to find him – as many or as few times as you wish. You may notice he is singing in one of them.

He dropped down later when I began raking the paths. I fear I disappointed him on the insect front.

Heidi, our much loved former daughter-in-law visited today and stayed the night. We lunched on Jackie’s usual spread of cold meats, pies, salads, and cheeses with which we drank Prosecco.

We spent our time reminiscing and exchanging thoughts and feelings about Michael’s death. During one period I took Heidi on a tour of the garden.

Mama Mia looked quite splendid in the Rose Garden.

Japanese anemones are as prolific as ever.

Heidi was impressed with the quantity of seating. We enjoyed views across the lawn and down the Phantom Path while we spent some time on the Westbrook Arbour bench.

Elizabeth joined us for a while and we all four sat on patio chairs enjoying pleasant conversation.

Jackie, Heidi, and I dined on The Culinary Queen’s delicious cottage pie; crunchy carrots and broccoli; and tender runner beans from our garden. I finished the Shiraz and the ladies drank Yellow Tail Pinot Grigio 2018.

A number of terra cotta and yellow kniphofias have self-seeded at various places in the garden and have recently chosen to bloom rather late. These are in the Kitchen Bed, accompanied by hibiscus, petunias, Japanese anemones and fennel.

This begonia and the pelargonium are recovering from near death with the benefit of Jackie’s tender care.

Like the white Marie Boisselot glimpsed in the bottom of the Kitchen Bed picture, this pink and blue clematis and the wisteria are producing their third flushes of the year.

I paused, this morning, to photograph this happy planting of pelargoniums, fuchsias, and Japanese anemones in the front garden before embarking into the car for a trip to Woodpeckers to visit

Mum, now well enough settled into her room to have hung her favourite pictures, one of which is a drawing I made in about 1958 when my sister would have been four and I would have been sixteen years of age.

Leaving Mum to her lunch we took a diversion around Burley on our way home for ours. On Bisterne Close we trailed a young woman riding a white horse.

Although dull, it was another warm day, which brought out flies again prompting ponies to cluster under the trees.

Jackie spent the afternoon in the company of her avian under-gardener who continually converses in the sweetest, almost imperceptible gentle whisper. We can just watch his throat pulsating. He spent some time in the cryptomeria above her head, dropping down to a terra cotta lantern beside her.

This evening we dined at The Wheel in Bowling Green. The food and service were as good as ever. We both chose tempura prawns as starters, with salad so fresh as to have possibly been immediately picked from the garden. Jackie’s main course was thick meaty burger with chunky chips, salad, and onion rings; mine was an excellently cooked rib eye steak with chips, mushroom, tomato, peas, and onion rings. Jackie drank a guest lager which we can’t remember and I drank a good Malbec.

When we arrived a robin greeted us from a hedge in the car park. For a moment we wondered whether Nugget had arrived before us.

Back at home I watched the recorded highlights of the first day of the final Ashes Test match.

CLICK ON ANY MEMBER IN A GROUP TO ACCESS ITS GALLERY, INDIVIDUAL MEMBERS OF WHICH CAN BE VIEWED FULL SIZE BY SCROLLING DOWN AND CHECKING BOX AT BOTTOM RIGHT

Late this morning I amused myself by poking my camera through the guest bedroom windows.

This afternoon Jackie and I shopped at Streets in Brockenhurst for a bag of coal, a spark guard, firelighters, gardening gloves, and a wheelbarrow. We continued on a drive into the forest.

On the moors along Rhinefield Road we spotted a mare suckling a foal. By the time I left the car and waited for a couple of cyclists to walk up the hill, the late lunch had been completed. The mother wandered off on her own, joining a few relatives. Her offspring gave chase. He then lay down for a rest. Off she went again. Up he rose and continued his pursuit.

When the ponies vacated this spot a longhorn cow advanced into it. She was joined by a black companion. These two drew closer together as the next member of the herd approached to commandeer its own pasturage. 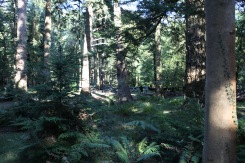 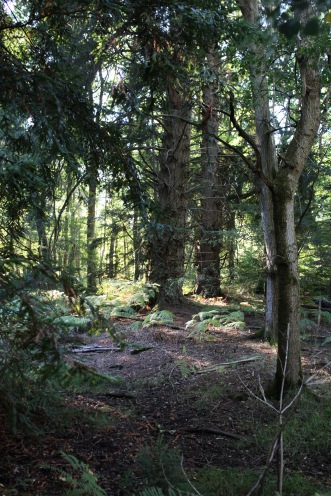 Dappled sunlight slipped through the trees along Rhinefield Ornamental Drive reflected in streams running under the road.

This evening we dined on Jackie’s splendid pasta arrabbiata with which she drank Hoegaarden and Elizabeth and I consumed more of the Pinot Noir.

CLICK ON ANY IMAGE IN THE GROUP TO ACCESS ITS GALLERY, INDIVIDUAL MEMBERS OF WHICH CAN BE VIEWED FULL SIZE BY SCROLLING DOWN AND CHECKING BOX AT BOTTOM RIGHT. FURTHER ENLARGEMENT MAY BE OBTAINED WITH A CLICK OR TWO. THE USUAL CLICK WILL ENLARGE THE FINAL PICTURE.

For the last couple of days Jackie has kept much garden furniture and many hanging baskets grounded against buffeting from the heavy winds. As this afternoon’s gusts swept towards the 60+ m.p.h. we are to expect overnight, there was no reason to lift tables, chairs, parasols, or baskets. Readers may care to spot the dropped baskets in this further collection of 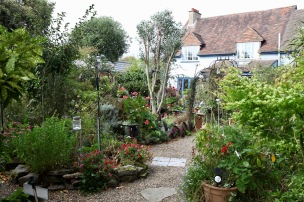 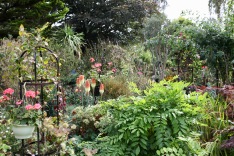 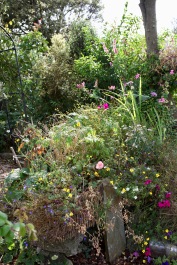 Given that she exchanged contracts on her Pilley house purchase today, it was appropriate that we named the delicious spicy creation that Elizabeth produced for our dinner this evening Pilley Celebration Chicken. This was served with Jackie’s splendid savoury rice and crisp sugar snaps. My sister and I drank Parick Chodot’s Fleurie 2016; my wife drank Hoegaarden.

I took a couple of strolls around the garden with a camera this morning. Sculpture Florence turned her back on the early light streaming from the Rose Garden. 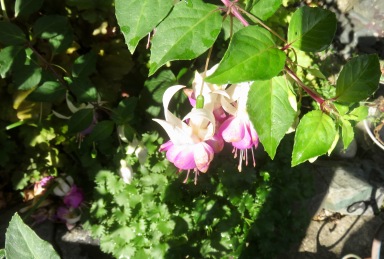 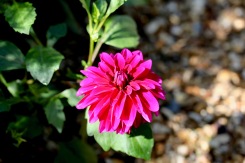 Overnight rain had refreshed fuchsias, geraniums, hydrangeas, and dahlias, in one of which Our red hot pokers are over now, but other kniphofias of more autumnal hues stand erect in the Weeping Birch and other beds. 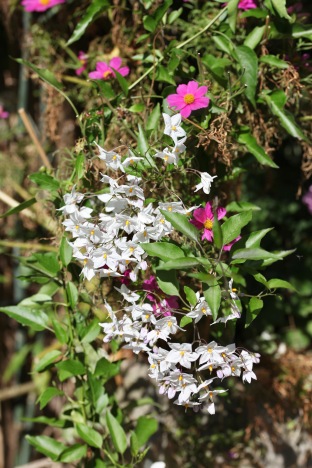 White solanum continues to drape itself over the dead tree beside the New Bed.

Spiders lurk everywhere. Look closely at the close-up of the hanging basket at the corner of the Phantom Path.

This afternoon Jackie drove me into the forest.

Along the Rhinefield Road a rather young foal foraged far from his parent who looked to be away in the distance. 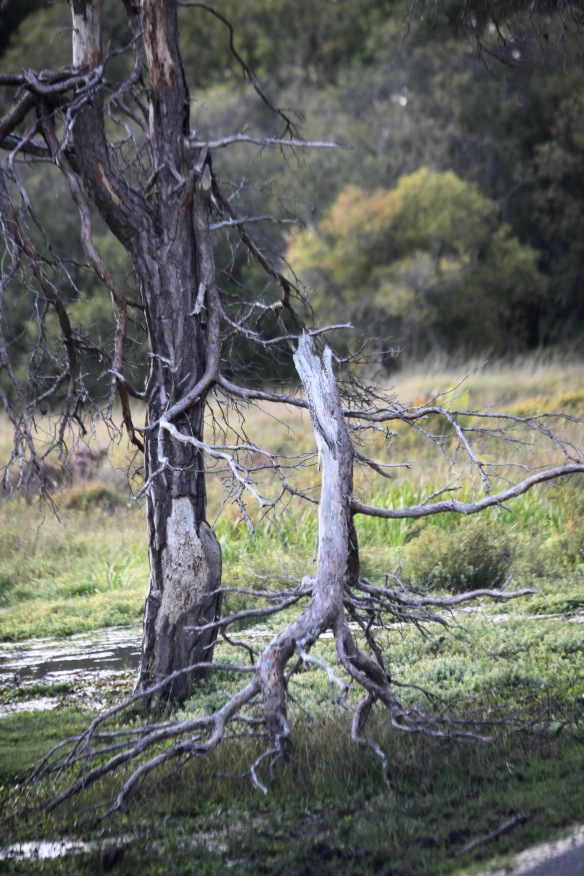 A little further along a forest sprite impersonated the upper section of a dead tree escaping the clutches of its parent body. 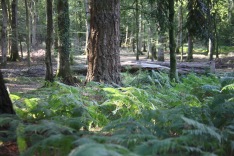 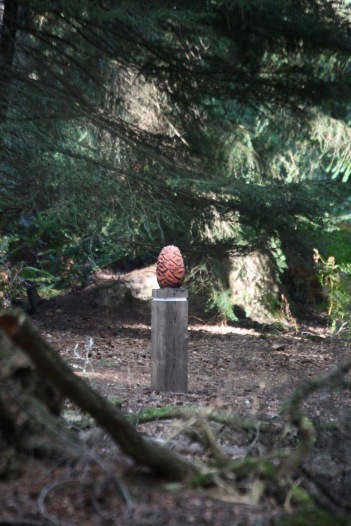 Along the Rhinefield Ornamental Drive dry layers of fallen leaves and pine cones offered a spring to my step and to those of a lone walker. A carved cone marked a route.

Passing the trough on Wootton Common we noticed that it was surrounded by cattle vying for a drink. By the time we had turned round to park the car near the animals, they were all trooping off along the moor.

Ah, not quite all. Just one diminutive creature had been left behind. In vain did this Marshmallow cow, time and again, circle the trough attempting to slake her thirst. Even her neck was just too short. Eventually she hit on a super wheeze. She tried the human spout. I wonder if the next two-legged drinkers will have any idea about who had preceded them.

Susan Rushton’s post earlier today featured colchicums. There are a number of different varieties of these autumn crocuses.

Ours are different, and a bit battered by wind and rain. I think they are speciosum. Here they are Susan. 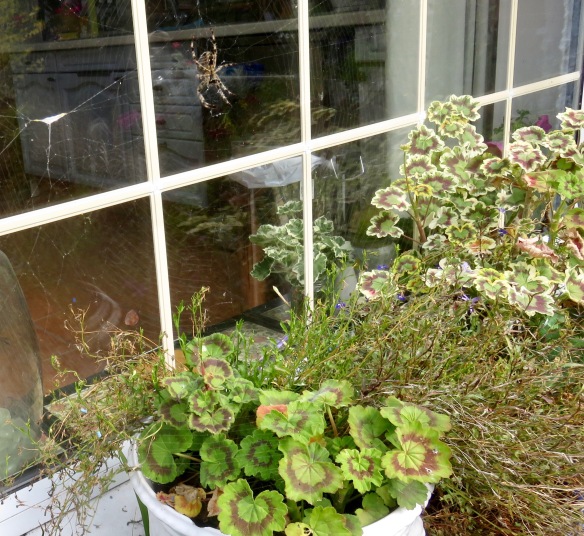 Whilst on my way to obtain the first two images above, I spotting a spider waiting on its web. As I watched it hauled itself up aloft and I just left it to get on with it.

Later, I walked the same way to capture the flowers in a different light.

The spider was gloating over its meal of the day. That was one bee that would seek no more pollen.

It is, of course, the season for these insectile predators. I couldn’t even photograph these snapdragons without one poking its nose in. 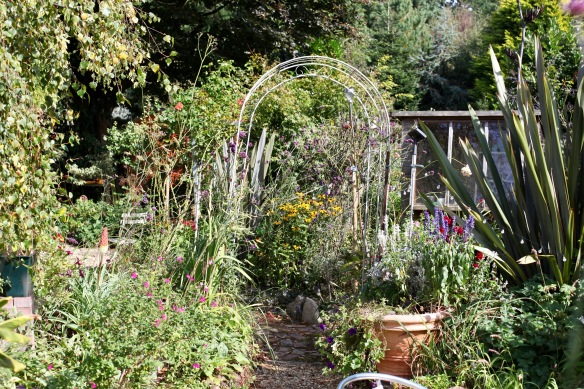 The antirrhinums appear to the right of this view through the arch framing the Oval Bed.

blending with the begonia in a hanging basket behind.

We still have many thriving fuchsias

including one festooning the New Bed.

This afternoon I finished reading ‘Phineas Finn’, the second of Anthony Trollope’s six Palliser novels. This follows the fortunes of the eponymous hero as he ventures into the Victorian Parliamentary world. Without giving away any of the story I can say that, against the background of conflict over reform bills in the 1860s, we have love triangles; fraught courtships; political and matrimonial intrigue; and a view of social history of a time when Members of Parliament needed independent incomes in order to fund their campaigns and carry out their duties if elected; and when women were dependent upon submission to their husbands.

Trollope’s lengthy work is rendered readable by his elegant, flowing, prose, which may not suit some of today’s readers requiring shorter, more racy works.

The author is clearly in sympathy with the status of women, especially those trapped in unhappy marriages. Perhaps that is why, as stated by J. Enoch Powell – himself a controversial politician active a century after the period of the book – the female characters have rather more depth of study than do the males.

Powell’s introduction is sound, and he was aptly chosen by the Folio Society whose 1989 edition I was reading.

In my review of ‘Can You Forgive Her?’, I expressed my disappointment in the illustrations of Llewellyn Thomas. I am no less enamoured of those he has made for the current volume, so I won’t reproduce any.

This evening we dined at Lal Quilla in Lymington. My main meal was Goan lamb, while Jackie’s was Chicken shashlik. We shared special fried rice, a paratha, and onion bhaji; and both drank Kingfisher and the customary complimentary Bailey’s.